How Texas Celebrates National Day of the Cowboy

Start in Bandera, the “Cowboy Capital of the World,” where every day honors cowboy heritage 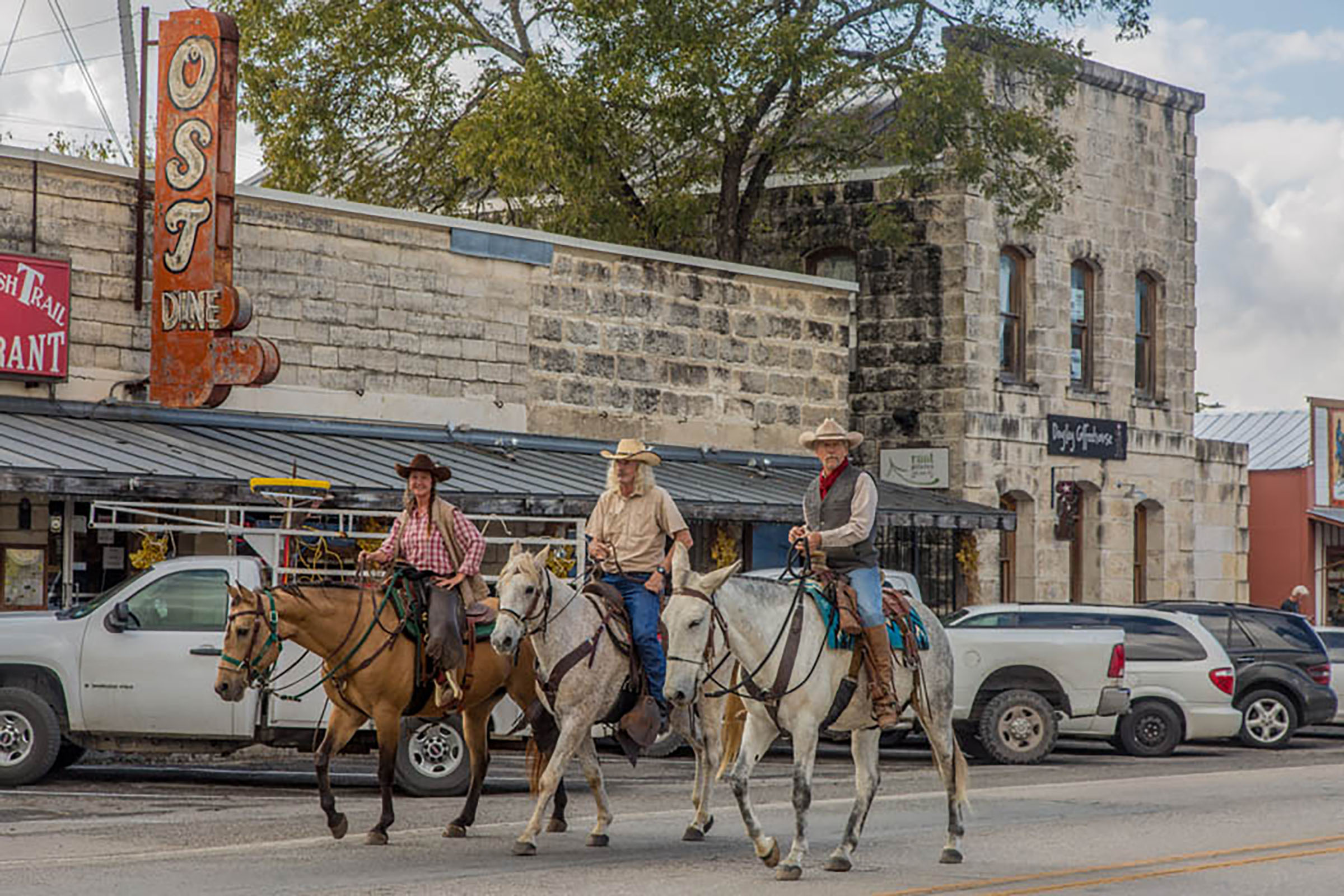 The Old Spanish Trail (OST) Restaurant pictured in the background is celebrating its 100th anniversary this year. Photo by Will van Overbeek.

As a town that prides itself on being designated the “Cowboy Capital of the World,” Bandera knows a thing or two about how to throw a Wild West wingding. Pick any weekend to visit the Hill Country town situated on the Medina River, and you’ll find a free rodeo, reenactments of an old-fashioned gunfight, and horse-drawn wagon rides.

“The cowboy is part of Bandera’s DNA,” says Patricia Moore, executive director of the Bandera County Convention and Visitors Bureau. “It is only fitting we honor the National Day of the American Cowboy.”

First celebrated in 2005, the National Day of the Cowboy falls annually on the fourth Saturday of July. The holiday came about thanks to a campaign spearheaded by Bethany Braley, executive director of the St. Louis, Missouri-based nonprofit organization that shares the holiday’s name. It became an official designated holiday in Texas when a bill was passed through the efforts of Braley, former state Senator Jeff Wentworth, former state Representative Joe Pickett, and Sen. Donna Campbell. Gov. Greg Abbott signed it into law in June 2015.

In Texas, enthusiasm for all things cowboy isn’t limited to Bandera. San Antonio, Amarillo, Fort Worth, and San Angelo are just a few of the cities that celebrate the event in some form or fashion. Barrel racing, cattle drives, fiddle contests, armadillo races, and Western art shows are several ways these cities choose to spread cowboy cheer (more in sidebar).

As you may have noticed, Bandera and other cities use “American Cowboy” in the name of their events for the day. The difference in nomenclature has a backstory: In late 2004, Braley worked at American Cowboy magazine, a publication no longer in circulation, and was tasked with promoting a day dedicated to preserving pioneer heritage and cowboy culture. Less than a year later, Braley was no longer working at the magazine, and the magazine’s owner, Bill Bales, was no longer invested in the event. So she took the proverbial bull by the horns and set out to make an official day to celebrate the cowboy.

In June 2005, Braley formed the nonprofit National Day of the Cowboy, which was headquartered in Fort Worth for two years starting in 2009. To make it an inclusive organization for cowboys and cowboy aficionados around the world, Braley dropped American in the original name. Because of this, the organization does not endorse the American Cowboy title, which several cities in Texas still use.

In places like Bandera, the name derived from the defunct magazine stuck, but Moore says the town’s decision to maintain the original name is by no means a symbol of exclusivity. “All cowboys are welcome,” she says.

Nestled between Bandera’s bigger Memorial and Labor Day festivities, the July event tends to be a low-key affair. But Moore says it’s not the level of extravagance or number of attendees that make the day special. Rather, it’s allowing people to enjoy themselves and experience the spirit of the town. For instance, she recalls how entertaining it was to see a mother and daughter from France at the event learning the technique of throwing rope. The two frolicked in the open space, playfully roping and chasing each other.

At the inaugural celebration in 2005, the town simply expanded its weekly “Cowboys on Main” offerings to include activities such as cowboy dress-up, rope-throwing lessons, leather stamping, storytelling, and live music.

Since then, festivities have grown to include a complimentary chuckwagon breakfast, ranch rodeos, and two-stepping at the 11th Street Cowboy Bar. Throughout the years, the day has remained a relaxed time to reflect on Bandera’s heritage and history.

“We have the drugstore cowboys, we have the gunfighters and all of that,” Moore says, “but the one thing that we have overriding everything is the fierce, determined, independent personality of the cowboy.”

Cowboy Celebrations Across the State

Head down to Bandera’s Courthouse Lawn on 500 Main St. this Saturday from 9:30 a.m. to 3 p.m. Then make your way to Mansfield Park Rodeo Arena in the evening for a ranch rodeo hosted by Ridin’ the River Cowboy Fellowship. Gates open at 6 p.m., and the rodeo starts at 7:30 p.m.

15th Annual National Day of the American Cowboy
Fort Worth

Feast your eyes on the American Plains Artists Western art show at the Fort Concho National Historic Landmark, 630 S. Oakes St., from 9 a.m. to 4 p.m. Afterward, you can watch a performance by the Concho Cowboy Company.