Tours of the center's ARK open to the public this week 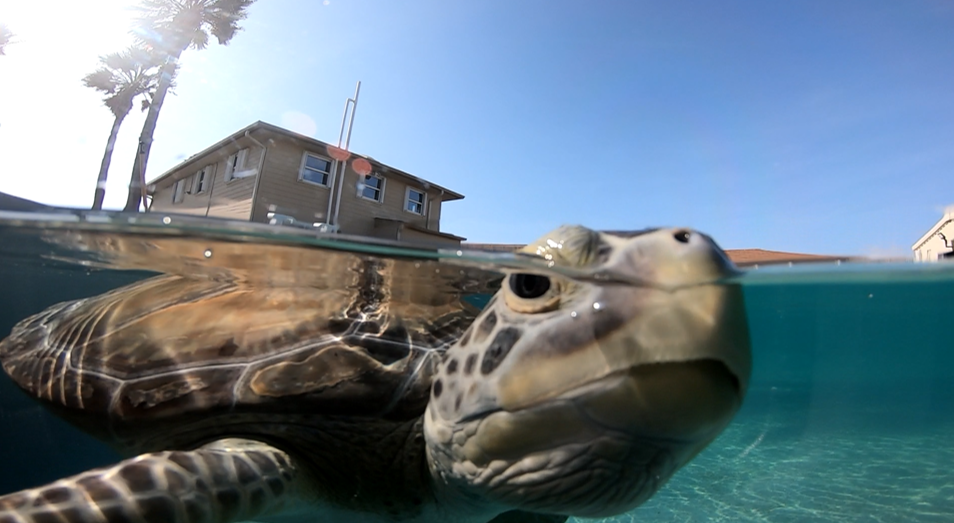 A venerable loggerhead turtle named Barnacle Billie, a roseate spoonbill named Boomerang, and other rehabilitated aquatic and shore creatures are on display this week for the first organized public tours of the Amos Rehabilitation Keep—ARK for short—at the University of Texas Marine Science Institute in Port Aransas.

“We are so excited,” said Alicia Walker, ARK’s program coordinator. “It’s been a long time coming.”

Tony Amos, the late legendary oceanographer for whom the ARK is named, “had a vision for public tours,” she said. “It would be an amazing educational resource. Then Hurricane Harvey hit.” That was the first of many challenges, not the least of which was Amos’ passing in 2017 within weeks of Harvey’s devastating landfall.

The guided tours will be on Wednesdays and Fridays by pre-registration and are limited to 15 people. Visitors to the complex on UTMSI’s seaside campus will witness first-hand the work of ARK—rehabilitated ocean turtles, raptors, and marine fowl that suffered from injuries, illness, or inherited physical defects.

At 200 pounds, Barnacle Billie is ARK’s longest and largest resident. She was rescued in 1997 after losing her front two flippers, possibly due to fishing interaction. She is classified as “non-releasable”—unable to live again in the wild. “She would be hindered finding food,” Walker said. “You have to be a little bit quicker than she is to catch a blue crab,” referring to a diet staple for Billie.

Billie is one of ARK’s “ambassadors,” non-releasable animals that won’t be hurt by interaction with tourists on a regular basis. As a requirement for public tours, ARK’s facilities were reconfigured to segregate the non-releasable population for public viewing from those who eventually could be released to their natural habitats.

The tour, which takes about an hour, passes first by a new raptor enclosure, home to non-releasable barred owls Claudia and Bobo, barn owl Felix, screech owl Cricket, red-tailed hawk Reba, and a peregrine falcon named Millie. Reba was hit by a car in 2008, permanently damaging one of her eyes—eyesight critical to her ability to hunt. Bobo is missing a wing and Millie a talon—both needed to fly and hunt. ARK tried to release Felix, but he didn’t embrace hunting, so as Walker said, “He just wouldn’t know how to survive on his own.”

Cricket’s problem is a feather deformity—making her a “loud flier.” She can’t sneak up on her next meal, like her silent flying screech owl cousins.

A turtle tank is the next stop—Barnacle Billie’s home, along with Nosey, a Ridley with growth impairments, and several sea turtles. A new raised deck and a shaded cover provide optimum viewing for tour participants.

A screened-in yard is home to dozens of coastal birds, including Boomerang the roseate spoonbill, brown pelicans, Franklin’s gulls, vultures, and a black-bellied whistling duck. The duck, named Sparky, became a non-releasable inhabitant when delivered by a well-meaning citizen who thought he was abandoned. Not so, but human imprinting meant he likely would not have known how to survive on his own.

“Not only are we a rehabilitation facility, but also an educational hub for demonstrating the importance of these animals and their habitats and opening dialogue on how they got here,” said Jace Tunnell, director of UT Marine Science Center’s Mission-Aransas National Estuarine Research Reserve, which manages the ARK.

The number of animals at the ARK fluctuates, depending on releases like the one last April of 23 rehabilitated sea turtles or finding homes in sanctuaries for those deemed non-releasable. As Wednesday’s opening of public tours approached, ARK’s population included 70 birds—about 40 non-releasable—and 16 turtles, 10 of which could be releasable. “The best day for us,” said Walker, “is to see them going home.”

The ARK guided tour is the second public opportunity to open post-Hurricane Harvey. In May, UT Marine Science Center restarted free guided tours of the Wetlands Education Center adjacent to ARK. The 3.5-acre center is a marsh and seagrass landscape with boardwalks and floating platforms.

Completing the vision for public-facing experiences will be the planned opening of the Patton Marine Education Science Center next year. The indoor marine museum and exhibit area has been closed since Harvey, which interrupted a major redevelopment code-named “Magnificent Sea!” that would include aquariums and interactive guest learning stations.

Like plans for ARK’s public tours, the Education Center’s indoor initiative was first delayed by the rebuilding post-Harvey of the mostly closed UT Marine Science Institute’s campus and then yet another shutdown due to COVID. Thanks mostly to a major gift by the family of Fort Worth business leader Bobby Patton, contracts for the $4.5 million redevelopment of the 4,500-square foot center have been awarded.

“Fingers crossed, we would like to get it open by next spring break, but certainly by summer,” said Georgia Neblett, director of external affairs for UTMSI.