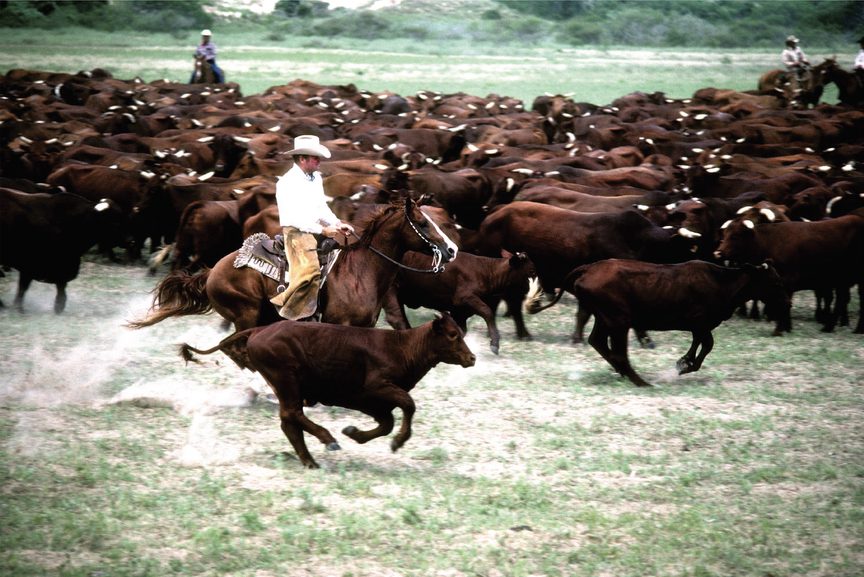 The annual cattle roundup on King Ranch, 825,000 acres of coastal savanna and brushlands, may be the ultimate cowboy proving grounds. The cowboys rise before the sun, withstand the August heat of far South Texas, and maneuver thousands of cattle into places they don’t want to be. It’s a challenge of grit, dust, and sweat. It’s also a rare and beautiful ritual—of horse and rider working together, of proximity with nature, of camaraderie and respect.

In the exhibition Live the West, at the Witte Museum in San Antonio through June 6, photographer Janell Kleberg ably transports us to the heart of the roundup. A skilled horsewoman and conservationist, Kleberg is also a member of the King Ranch family and reveals this otherwise arcane world with the intimacy and knowledge of an insider. Shooting these images over 30 years, from 1970 to 2000, she catches the combustible energy of the moment, from the grace of the cow horses to the wildness of the cattle.

With her Nikon in hand, Kleberg shot many of these photos on horseback, daring to ride at the same speed as the cowboys. “I tied my split reins in a knot behind the saddle horn to use both hands and hoped not to get bucked off or run over,” Kleberg said.

On the advice of cowboy photographer Bank Langmore, Kleberg used 64 slide film. “Langmore advised me that it does not fade—a key reason my photos still exist,” Kleberg added. “However, the slow shutter speed made sunrise and sunset photos such as these a matter of being more lucky than smart—to get a sharp image moving in low light.” 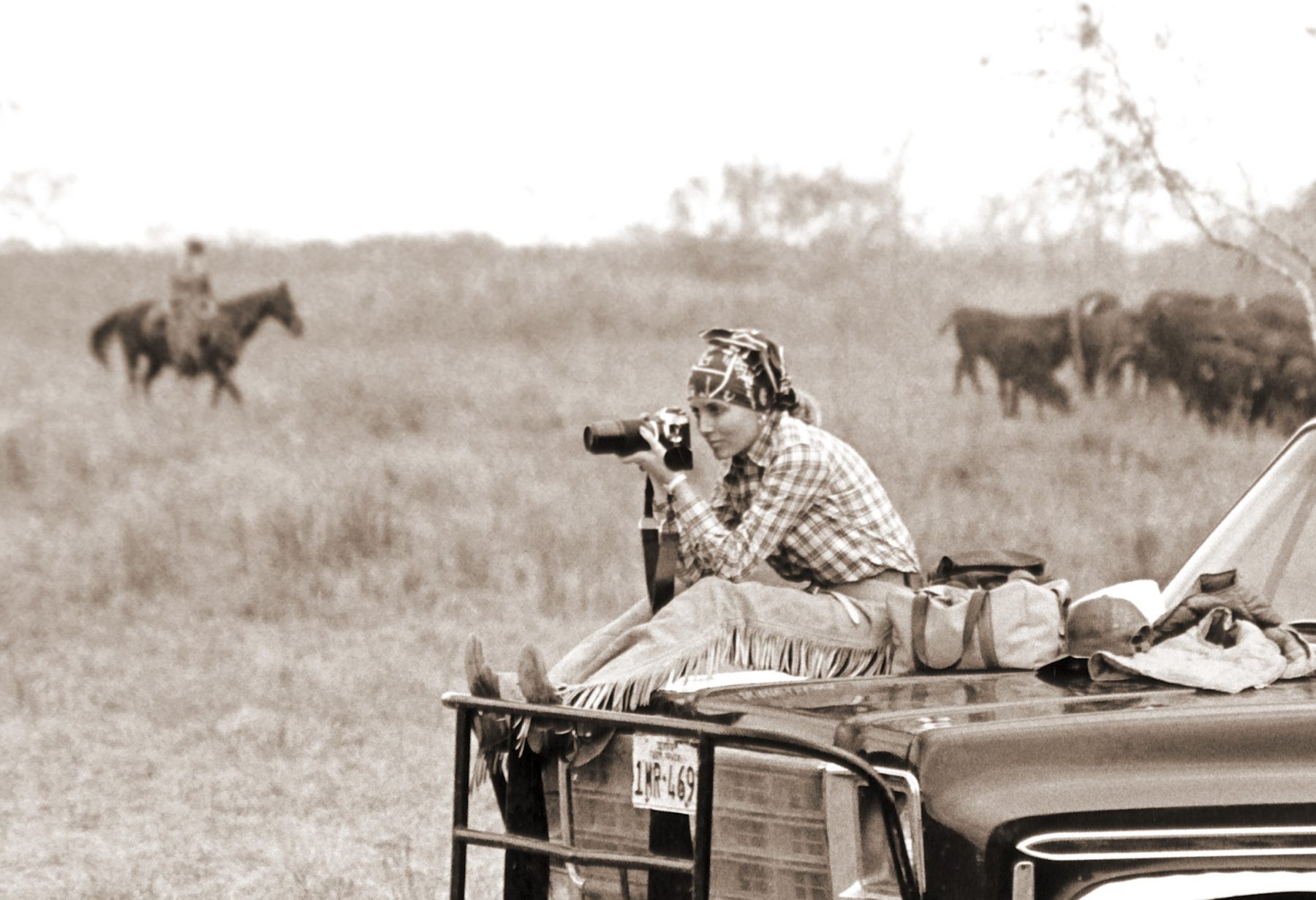 Live the West is fueled by more than the power of photography; Kleberg’s voice helps to tell the story. The 20 photos are on loan from the personal art collection of Julianna Hawn Holt, a college friend of Kleberg’s, and for each photo Holt purchased, Kleberg wrote her a letter with the story of that day. Recordings of Kleberg reading these personal letters have been skillfully woven into the exhibition. As observers move from photo to photo in the small gallery, they can use their phone to scan the QR code that accompanies the image to hear her words. This adds an intimate layer that not only informs viewers of the spirit behind each photo, but also reveals the reverence Kleberg feels for the people, animals, and land that create this quintessential cowboy experience.

For the photo “Pacho’s Herd,” Kleberg singles out Nicolás “Pacho” Rodriguez, the now retired cattle manager at the Southern division of the ranch. Kleberg reads to us that he was “a fine horseman, and at the same time, he approached managing cattle in the calm, methodical manner of an executive with a leather briefcase.” The photo shows off brushlands, blue skies, and cowboys encircling cattle, but her words turn it into a warm tribute to a cowboy who was “always dressed in his best starched brush jacket and straw hat for the three or four days that it took to work the herds.”

The recordings also convey the very particular vernacular of the roundup. Words like ‘remuda,’ ‘lead steer,’ and ‘dry cow’ may be commonplace for a cowboy but are esoteric to an urban dweller like me. The exhibition appeals to the uninitiated and helps them to understand the language and nuance of the roundup. It’s an education in the intricacies of relationships—both animal to animal and animal to person.

Kleberg’s husband, Stephen “Tio” Kleberg, plays protagonist in many of the images—keep an eye out for the dashing cowboy in suede fringe chaps and handlebar mustache. In one of the most striking photos, “The White Sands of August Rising,” Tio is mounted on a gelding, lassoing a thousand-pound cow who needs her horns trimmed. The grace of the rope overhead, against a backdrop of white haze and blue sky, would make aspiring cowboys or cowgirls catch their breaths with envy or aspiration. 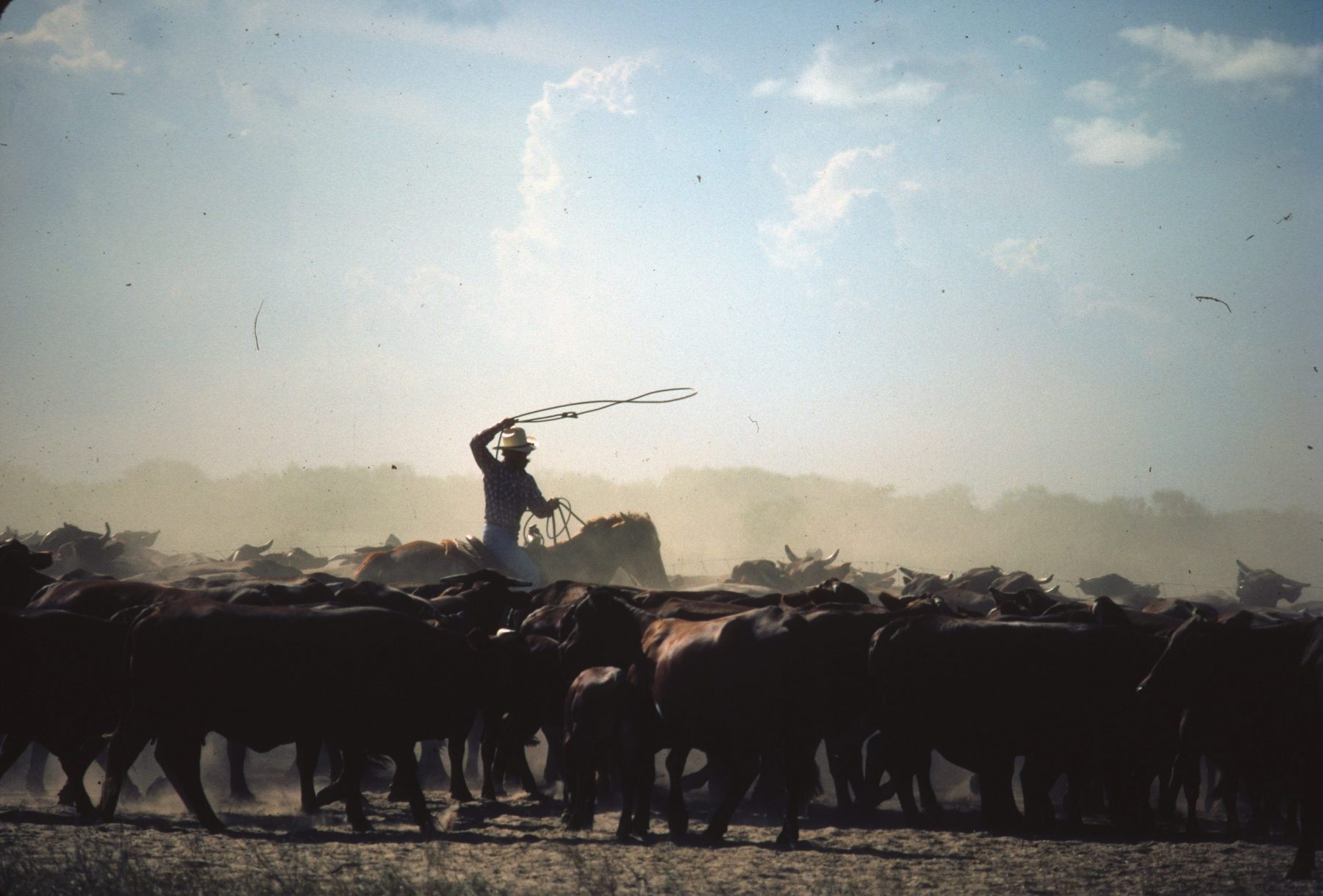 In “The White Sands of August Rising,” Stephen “Tio” Kleberg attempts to lasso a thousand-pound cow. Photo by Janell Kleberg.

The most transfixing images are of Buster Welch, the award-winning cutting horse trainer, with Peppy San Badger, or “Little Peppy,” his championship quarter horse. In one photo, Little Peppy’s whole body slants steeply as he pursues a calf, but Welch sits gracefully upright in the saddle. Kleberg, an artful writer, describes the action: “The economy of motion that Little Peppy marshaled with smooth muscles allowed him to turn effortlessly. …”

About a photo titled “Simply the Best,” Kleberg’s words are wistful, and show the love and respect she and Holt share for this singular and fading culture.

“You will see the smile on Buster’s face and the relaxed seat he has in the saddle, despite the impending duel with a seriously wild Santa Gertrudis cow. Those cattle were straight out of the brush, some who had avoided being gathered for years—and the dry cows would hook a horse at every pass in the herd. It was simply the best day ever. I am so glad to share it with you and I think of you each time I find an image such as this. I know that you understand what it means and how this time will never come again. What luck to be there on that day.”

Few friends today would take time to write to each other about the intricacies of cowboy life, much less write letters at all. It’s gratifying to hear them read aloud. The two women dedicated the exhibition to Tio’s aunt, Helenita Kleberg Groves, an avid horsewoman who grew up, like Tio, on King Ranch. These three women’s deep shared affection for the roundup and the culture that surrounds it propelled the Live the West exhibition into being. Through it, the rest of us get to ride with the cowboys.