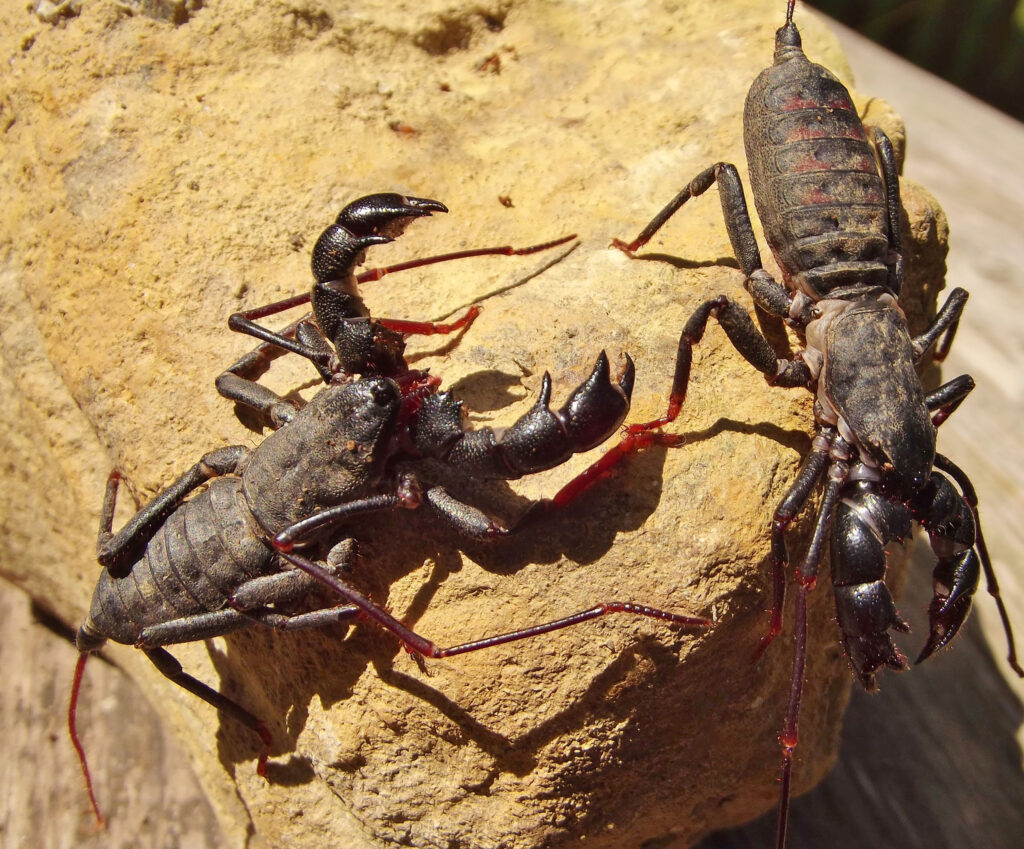 Photo by Daniel Bechmann, from Pixabay

Sometimes, when the summer rains sweep the deserts of West Texas, strange arthropods stir in their burrows. Commonly called vinegaroons, they emerge into the desert night in search of meals and mates, fending off predators with squirts of sharp, vinegar-smelling liquid.

They’re so secretive and shy that most people have never heard of them. But on July 14, staff members at Big Bend National Park photographed a vinegaroon wandering around the Chisos Basin campground and shared it on Facebook.

“Vinegaroons are about 3 inches long and relatively benign unless you happen to annoy them,” the post ran. “They can pinch with their heavy mouthparts (pedipalps) and shoot a well-aimed spray of 85% acetic acid (vinegar) from the base of their ‘whip’ to protect themselves.”

That was enough for breathless media outlets to describe the beasts as ‘’acid-shooting land lobsters.” But that’s a needlessly scary way of discussing an ancient, shy, and interesting animal, says Gwen Pearson, education outreach coordinator for Purdue Department of Entomology, where she works with vinegaroons.

Vinegaroons—sometimes called “whip scorpions”—are arachnids, distant relatives of spiders and scorpions. Found on every continent but Antarctica and Australia, the family is most common in tropical areas, with the majority of species known from Southeast Asia. “The one we have in Texas is actually kind of unique,” Pearson says. “It’s the largest one, and it’s one of the only ones that lives in deserts. So it’s unusual in size and habitat.”

Vinegaroons have terrible eyesight, and so spend their days underground and only come out at night, using their long, whip-like forelimbs to sense vibrations in the ground. “They’re so sensitive to vibration—that’s why we hardly see them,” Pearson says. “As soon as they hear a giant human stomp along, they go right back underground.”

Vibrations are also useful for detecting prey. Vinegaroons will eat anything smaller than they are, including millipedes, scorpions, and newly metamorphosed toads. Like scorpions, they use their big foreclaws—actually modified mouthparts—to grab and hold tasty morsels. Despite their fearsome appearance, however, they aren’t venomous, or even particularly nippy.

That vinegar is what makes the animal unique and gives them their common name. Vinegaroons squirt the weakly acidic solution from their whiplike tails in order to scare off mice or skunks, and can fire off up to 10 volleys—at a distance up to 40 centimeters (nearly 16 inches)—at a time. Given how unpleasant a face full of vinegar is, most predators tend to leave them alone.

As a result, the safest place for a baby vinegaroon to be is on its mother. According to Pearson, vinegaroons are excellent parents: The female keeps her eggs on her back as the babies develop, often for as long as a year. While the babies occasionally share in her kills, they mostly live off of an enormous yolk sack until they’re fully developed, which keeps them from eating each other.

“They look like eggs with legs,” Pearson says. Once the babies are mature, they go off on their own.

While vinegaroons are sometimes sold in the exotic pet trade, Pearson advises against keeping them: They’re difficult to breed in captivity, so animals offered by dealers are nearly always collected from the wild, a practice which can be incredibly damaging to animal populations. The vinegaroon is best appreciated from a respectful distance: a relic of an ancient ecosystem, peacefully wandering the desert floor at night and minding its own business.

“They’re just really good at what they do, even though they look weird and awkward,” Pearson says. “It’s a special, unique animal that you can find in the Southwest, and instead of freaking out about them, we should be excited that we get to see them.”