Laura Turón, Jesus 'Cimi' Alvarado, and Tino Ortega are each making their distinct mark in the city 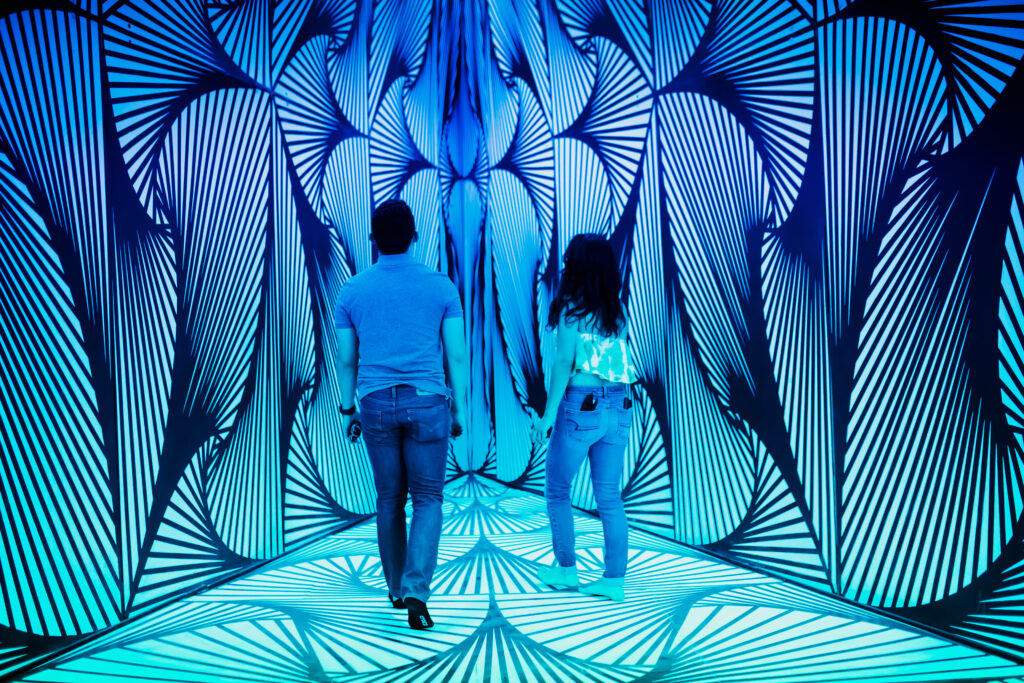 Visitors immerse themselves in the pyramid at Laura Turón’s Paradox Immersive Gallery. Photo by Gaby A. Velasquez

Drive from El Paso’s Upper Valley through downtown and east toward Socorro and you’ll undoubtedly spot colorful murals, innovative sculptures, and creative art installations. Several of the projects come from three talented artists who grew up in Sun City and now give back to their community through their artistic talents.

First is Laura Turón, whose latest project, Paradox Immersive Gallery, opened last August and ran through February at Hacienda Apodaca, on the Socorro Mission Trail. The installation invited visitors to examine light patterns and enter a 15-foot-tall pyramid with internal painted lines that appeared to bend and morph with the changes of colored lights.

Exploring illusion and dimension, Turón’s work invites interaction. “I combine different light interpretations, design, and large-scale compositions through mark-making drawings, and explore the concepts of time, science, and anthropology in art,” she explains.

Turón earned her Bachelor of Fine Arts in Studio Art in Drawing and Graphic Design from the University of Texas at El Paso. In 2017, she launched the Paradox Traveling Art bus, a mobile gallery that caught the attention of a member of UTEP’s EM Lab, an innovative technology lab specializing in electronics, electromagnetics, photonics, and digital manufacturing.

Noticing visual similarities between Turón’s patterns and the designs of an algorithm the lab had developed, a collaboration ensued that brought some of the lab’s research into Turón’s work, including creating a unique pattern for Unity, a 14-foot-tall steel and polycarbonate sculpture recently installed in El Paso’s Upper Valley as part of a public art project.

“As an artist, my mission is to create art for the community; public art is a perfect way to do so,” Turón says.

Look for Paradox Immersive Gallery this summer, when it moves to an as-yet-undetermined location in central El Paso.

For Jesus “Cimi” Alvarado, art is about chronicling history. “Most of my work revolves around telling stories of our communities, my community being Segundo Barrio, so I tell the stories from there,” he says.

With dozens of murals around El Paso, including Fronterizos (“Border People”) along the façade of the El Paso Museum of Art, and El Corrido del Segundo Barrio in Armijo Park, Alvarado has been telling visual stories in El Paso since the early 2000s.

In 2021 he gained national attention with his work on feature films The Forever Purge (starring Josh Lucas) and Cassandro, a forthcoming biopic starring Gael Garcia Bernal as Saul Armendariz, the first gay Lucha Libre wrestler. He also earned the 2021 Community Spirit Award from the business-focused publication El Paso, Inc. and completed Blurred Boundaries, a large-scale public art piece composed of 1,720 square feet of glass panels above the entrance to the Chamizal Community Center.

“I really like what happened with the Blurred Boundaries piece, where I’m working more with light, with glass, with different elements and incorporating them into muralism,” Alvarado says.

While he’s experimenting with mixed media and scale, Alvarado continues to find inspiration through shared experiences and stories. “After talking to people, you realize that a lot of us in my generation grew up in the same way, with parents that came from Mexico,” he says, “and some of the same memories in terms of music, food, politics. A lot of the paintings I’m working on are based on that.”

In early 2020, Tino Ortega opened Galeria Lincoln in the Lincoln Park area of El Paso. While getting to know the gallery’s neighbors, Old Sheepdog Brewery, Ortega found out they had family directly affected by the tragic Walmart shooting in August 2019. “When I learned that, I wanted to do something,” Ortega says. He created a plan to paint 23 murals, honoring the lives lost.

In May 2020, he began work on I (Heart) EP, a mural spelling the phrase in his signature silver mylar balloons and a red heart balloon in the center. By the end of 2021, he’d completed nine vibrant murals around El Paso, which quickly inspired viewers to take selfies or conduct graduation and quinceñera photo shoots in front of the playful backdrops. “It’s supposed to be interactive,” Ortega says, “So it’s been really exciting to see all that.”

This year Ortega is staying busy. He was recently chosen the city to create a new memorial mural for the 23 victims of the Walmart shooting. It will be located in Ponder Park, where people gathered that tragic day. He is also showcasing other local artists at his gallery and aiming to complete the remaining 14 murals by the year’s end.

“I want to incorporate as much of the culture as I can into them,” he says, “and just hopefully make El Paso a more unified place, a more joyous place to be, and increase the overall experience of the border region.”