My Favorite Texas Trip: An Englishman Goes Honky-Tonking in Amarillo 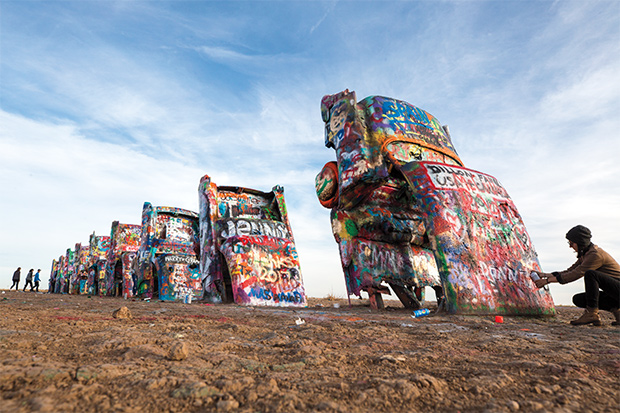 “Jesus did not Tap Out, He loves you!” shouted an oncoming billboard. Had I read that correctly? Before I could lean back to snatch it again, it was gone. “The rapture is coming. Save yourselves. Turn to Christ” came another. Was this a fever dream? No. It was 2016, and I was in the middle of a road trip through the United States after graduating from university back in England.

“Mate where are we?” I asked Elliot, who was behind the wheel.

“Texas,” he responded. “I guess we’ve finally entered the South.”

The heralding of our collective doom soon eased as we headed into the wide-open plains. The frontier. The sepia backdrop to the state’s Western heritage. In my mind, and perhaps that of some back home, this is the land of 10-gallon hats and lassos, and rangy men that burst through batwing doors of dimly lit saloons. I’ll admit I’m a little heavy on the stereotypes here, but beyond that and the Battle of the Alamo, I’m embarrassed to say I don’t think we in Britain know all that much about Texas.

We rolled into Amarillo late that afternoon, and so began our usual ritual of booking a motel, then finding where we were headed out for the night. We booked a cab and decided to simply go wherever the driver directed us.

“Guitars & Cadillacs,” came the cab driver’s gravelly answer. “It’s the place to be in Amarillo. For sure.” In such unfamiliar surroundings, a cabbie’s word is law.

Despite the rather frank and direct name, Guitars & Cadillacs wasn’t quite the cut ‘n’ shoot bar I had been naively hoping for, and it was seriously lacking in swinging wooden doors, the type you see in Western films. Yet the place was dimly lit, and smoking was allowed inside. Throw in cheap alcohol and that mythical frontier felt a little closer.

As we occupied a table, I noticed people arriving gradually, wearing fantastic outfits comprised of cowboy hats, shirts and boots, topped off with side-plate-sized belt buckles. From the rafters came the Southeastern baritone of Luke Bryan singing about huntin’ and shootin’ every day. The place was starting to come alive as more and more people piled through the door.

As the music changed into a more swinging number, boys and girls came together at once and launched into a brisk two-step. It seemed to me like an oddly formal engagement in a Texan bar.

I wondered if the fever dream I’d woken up to that morning had reached new levels. Dancing in this manner is not something observed back in the UK, unless perhaps it’s an occasion for fancy dress or an attempt at irony. The number of people under the age of 60 familiar with any sort of classical dancing is on an unrelenting downward trend. Instead we choose to convulse to repetitive beats too loud to shout over, whilst timing stares with strangers through strobe lighting.

Here in Texas, however, the dancing was fluid, and the fun actually felt authentic. Once the song finished, the dancers went back to casual socialising as I looked on flabbergasted. And this was really normal?

“This place is a pretty typical country-and-western club, and the dances are kinda just something we do growing up” one local said to me as I later attempted to get in on the square dancing. “The ones that stick to traditional country-western dance stay in the middle, but you’ll get the radicals on the outside”.

If I’d heard the word “radicals” and “Texas” in the same sentence, Guitars and Cadillacs in Amarillo wouldn’t be where I’d place them. But if it’s on the fringes of a square dance, then in a Texas country-and-western club in a 10-gallon hat is where you’ll find me.

We were keen to see what Amarillo had to offer, and one particular answer came unanimously from the lips of everyone we’d asked: Cadillac Ranch. It seemed the site was a pertinent thing around here, and having grown up with Bruce Springsteen-obsessed father, it felt apt to go and see this mythical place the next morning before getting back on the road to Fort Worth.

After following a sign directing us off Route 66, we trudged through a cow pasture to be greeted by the surreal image of 10 phosphorescent Cadillacs jutting out of the ground before us. The starkness of the surrounding pasture only amplified the utter outlandishness of the scene. A few cans of spray paint lay scattered about, encouraging us to add to the medley. Alas, it was too early in the morning to create any murals, so I simply wrote my name like thousands had before and will do again after, signing the end to my Texan fever dream.