While driving the Texas coast to follow a group of kayakers, Pam LeBlanc encountered sweet small towns and the occasional disruption, including thick mud and a flat tire. 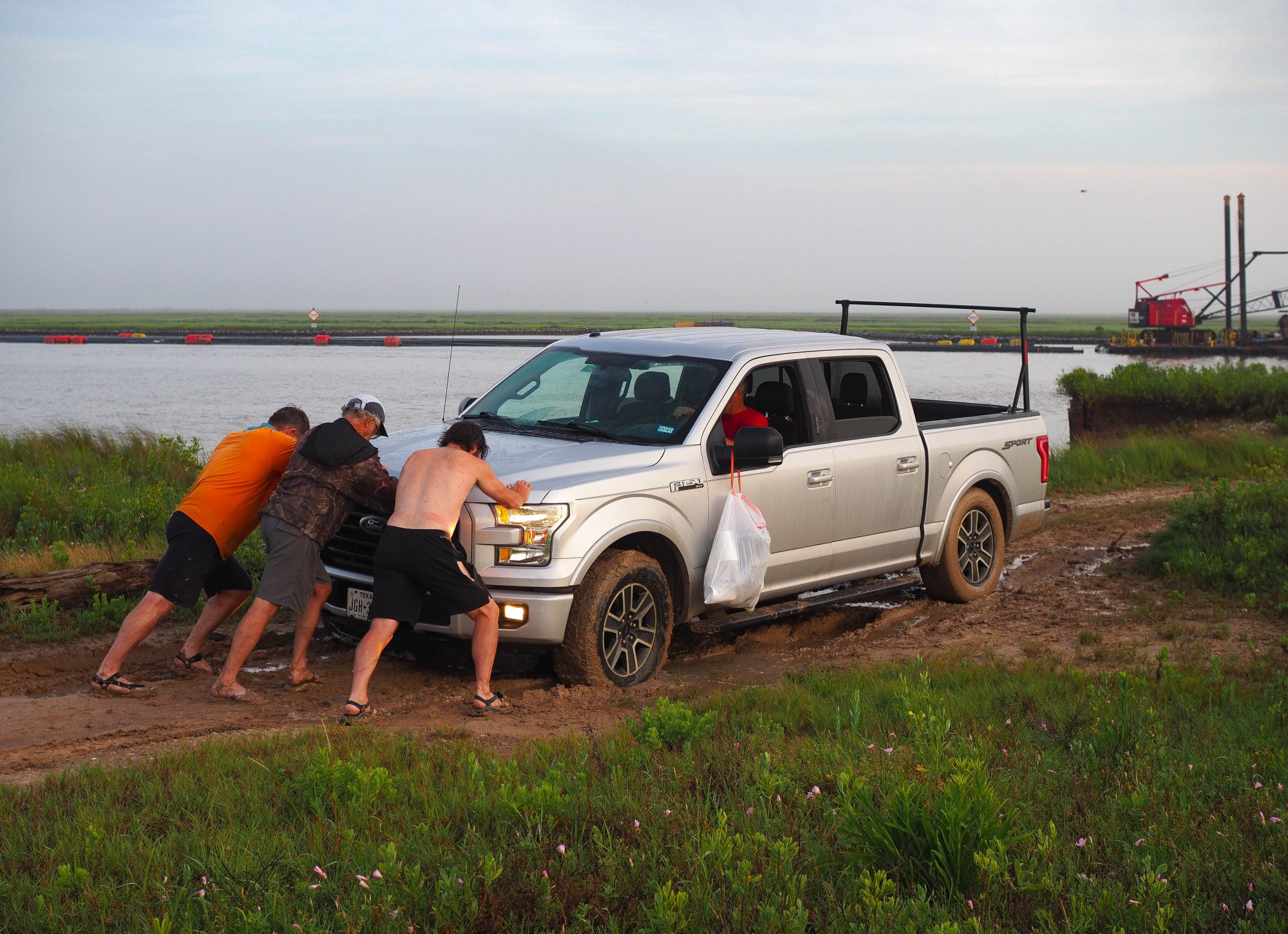 LeBlanc’s truck got stuck in the mud at Sargent after a rainy night. Photo by Pam LeBlanc

Strange stuff can happen when you drive the coastline of Texas from the state’s southernmost tip to the Louisiana border.

In May and early June, I followed along as a group of five kayakers navigated the Gulf of Mexico and Intracoastal Waterway for a 420-mile trip paddling from South Padre Island to the Sabine Lake Causeway Bridge. While the kayakers plowed their way through waves the size of school buses and past the occasional alligator during 13 days on the water, I motored through my own on-land adventures. Along the way, I discovered friendly little towns and got a few lessons in self-reliance along the way.

The big fun began halfway, when in the small seaside community of Sargent, I encountered a construction crew busily replacing the state’s last swing bridge with a permanent span.

The construction meant the paddlers would have to portage, and as I waited for them to arrive, I met the county constable, who showed me where the team could take out of the Intracoastal Waterway and put their boats back in. As we shuttled around the construction zone, the skies darkened. We needed to set up our tents before a storm hit.

The spot we found seemed perfect: A mostly flat niblet of land next to a barge landing 7 miles north of town. We quickly pitched tents, then headed back for a meal as the storm hit. The guys tossed back double cheeseburgers from Hooker’s, and when we got back to camp, the dirt road had turned to mud. Our tents still stood, but puddles had formed inside mine. Thankfully, I had a cot.

I went to sleep but jolted awake a few hours later when a barge parked nearby fired up its generators. The roar continued for the next six hours, along with floodlights so bright they illuminated the entire area. When I staggered out of my tent, the mosquitos strafed me, and I slipped in the sticky mud. Within the hour, we’d mired my husband’s Ford F-150 pickup in the muck. That’s when I called my new constable friend, who sent someone over to winch me out.

I resumed my road trip, only to discover that my phone, which had gotten wet overnight, had quit working. I followed paper maps to Galveston, where a friend invited me over and we placed the device in a bag of rice. That revived the phone, but a piece of rice got lodged in the charger portal and it took 45 minutes to whittle it out with a sewing needle.

But I was back in business, snapping pictures of the paddling team at the tall ship Elissa and along Bolivar Peninsula. 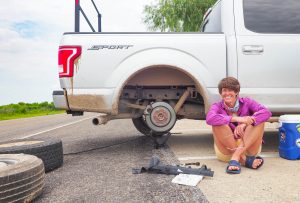 Pam LeBlanc took this photo of herself while changing the tire on her Ford F-150 pickup truck. Photo by Pam LeBlanc

The biggest challenge came two days later, though. After a couple of relaxing hours at the Stingaree Restaurant in Crystal Beach, I hit the road only to find myself staring at a closure barricade at the end of a remote, two-lane highway. I whipped a U-turn, and moments later my low tire-pressure gage lit up. Air gushed from a rear tire as I limped to the side of State Highway 87 and phoned a friend who was 90 minutes away.

My friend promised to help, but suddenly I thought better of it. Surely, I could fix the flat myself. I pulled out the owner’s manual, dug out the jack, and assembled the lug wrench. Following the manual’s instructions, I lowered the spare from the truck’s belly, loosened the lug nuts, and raised the truck. I’d wrangled the flat tire from the hubs and dragged over the spare when my friend showed up.

By then, though, I was determined. I warned him not to lend a hand as I used my knees to hoist the spare into position. I replaced the lug nuts, lowered the truck and turned to take a bow.

Hands filthy, bits of asphalt stuck to my skin, and a smile on my face, I declared victory, just hours before the kayakers finished their trip at Walter Umphrey State Park.

Strange as it sounds, I couldn’t imagine a better way to cap off this strange road trip than fixing my own flat.