Not Wild Pigs: In Appreciation of Javelinas, Iconic Native Wildlife of Texas 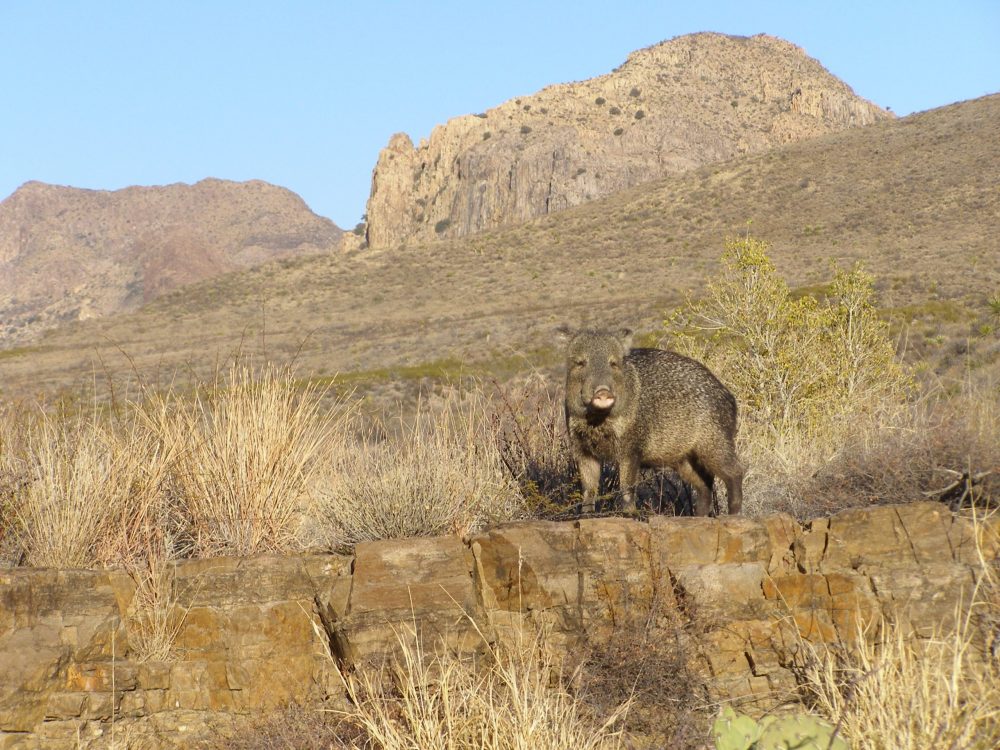 A javelina, or collared peccary, in the Davis Mountains of West Texas. Photo courtesy Dale Weisman

During West Texas sojourns, I watch for collared peccaries like forgotten spirit animals along backroads and hiking trails. Javelinas, as they’re commonly known, are an indomitable icon of the American Southwest. Yet this tough, tenacious survivor seldom gets the credit it deserves as a true Texas native, worthy of respect and protection.

The problem is many people confuse javelinas with invasive, environmentally destructive wild hogs. It’s a case of mistaken identity: Javelinas appear pig-like, just as bison look cow-like or coyotes dog-like. But peccaries and pigs are biologically different animals, classified in separate families. Although they share a common evolutionary ancestry, the two families diverged some 40 million years ago, with pigs evolving in the Old World and peccaries in the New World. Today, three peccary species inhabit the Americas: the white-lipped peccary, the Chacoan peccary, and the collared peccary. The latter is the most widely distributed species, ranging from Argentina to as far north as Arizona, New Mexico, and Texas.

Named for a collar of whitish fur around the neck and shoulders, collared peccaries stand about 2 feet tall, weighs 40 to 60 pounds, and sport coarse dark fur, a large head with a disk-like snout, razor-sharp canines, rounded ears, a small tail, and a lean but stout body perched on long, thin legs with petite hooves. Primarily herbivores, javelinas have a complex stomach system capable of digesting cactus, lechuguilla, sotol, mesquite beans, acorns, roots, and grasses. Their go-to diet in Texas is the prickly pear, and they can survive on the thorny pads during prolonged droughts.

Javelinas have an undeserved reputation for ferocity. “I remind people that javelinas are not dangerous,” says Raymond Skiles, a retired Big Bend National Park wildlife biologist. “A fundamental policy is to give them space. If they come into your camping area or yard, back away and leave them an out. They are not a predatory animal and not commonly aggressive, and when you follow ‘don’t feed the wildlife’ policies, you can live in peace with them.” One caveat: Javelinas despise dogs, mistaking them for coyotes, so keep your dog on a leash in javelina habitat—or better yet, leave old Buddy at home.

Sometimes called “stink pigs” or “musk hogs,” javelinas emit a pungent, skunk-like spray from a scent gland near the tail to mark their territory, bond with the herd, and ward off predators. You’ll often smell a javelina—a near-sighted creature with a keen olfactory sense—before you ever see it. Javelinas are highly social herd animals, communicating with grunts, dog-like barks, yips, woofs, growls, and loud tooth and jaw popping when threatened. Herds or “squadrons” range in number from five to 35. It’s a treat to see a mama javelina with her tiny “reds,” the nickname for reddish-brown babies. 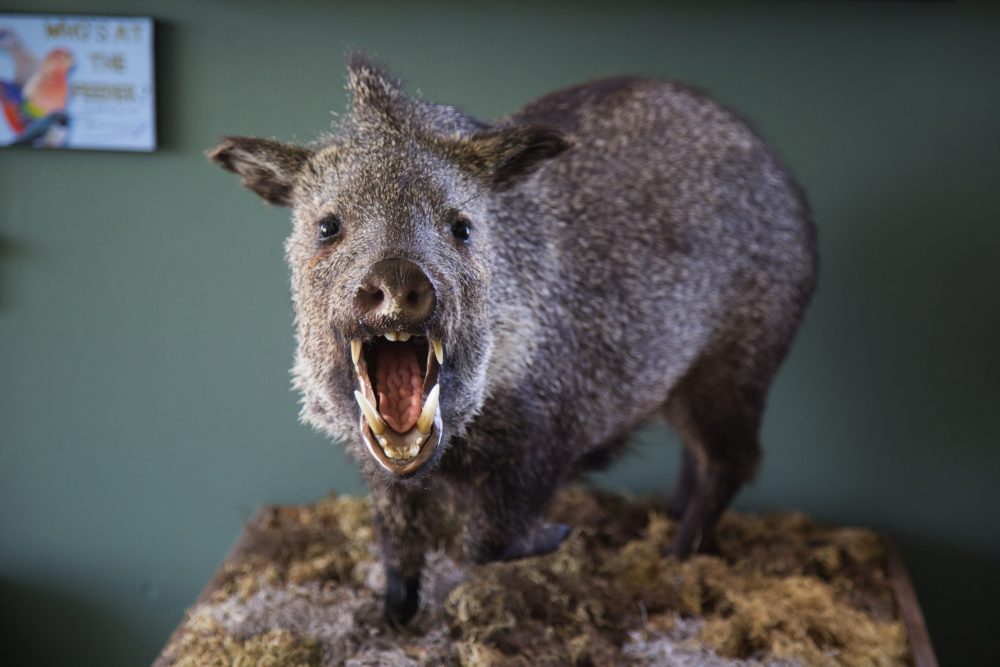 A taxidermied collared peccary at the Eaton Hill Nature Center in Sonora. Photo by Will van Overbeek

While hiking at sunset in the Chisos Basin in Big Bend National Park last fall, I wondered, “Where have all the javelinas gone?” It’s been a long time passing since I’ve seen the often-photographed squadron of javelina that once held near-celebrity status in the basin campground.

“The javelinas didn’t make it in the Chisos Basin,” Skiles says. “I thought javelinas would always be there like prickly pear and never go away, but since the Big Bend had the worst drought on record in 2011, not one has been seen in the basin.”

After traversing Big Bend Country last fall, from Marfa to Chinati Hot Springs and from Presidio to the national park, I spotted just one javelina—a lone sentinel along a highway in the Davis Mountains.

“Watching javelinas outdoors is like a natural TV for me,” says Dave Larson, formerly Big Bend’s chief of resource management and now superintendent of Fort Davis National Historic Site. “Every time I see javelinas, I stop to watch them because they are fascinating animals that can survive in harsh, arid environments. We should be proud of the javelina as a North American wild animal.”

Larson believes severe drought and natural predation may be impacting javelina populations in Big Bend National Park. After the 2011 drought, he says, black bears, a top javelina predator along with mountain lions and coyotes, came down from the high country and hunted javelinas near the park headquarters at Panther Junction.

Humans are another apex predator. From the 1880s until the late 1930s, hunters slaughtered countless javelinas in Texas and Mexico for their tough hides, used for gloves and other leather goods. The hide hunting massacre eased in 1939 when the javelina gained protection as a game animal in Texas, with a year-round season and a two-per-year bag limit. Nowadays, javelina hunting is popular on South Texas ranches, which also cater to wildlife watchers and nature photographers.

Historically, javelinas in Texas ranged north to the Red River and east to the Brazos. Over the decades, their range has receded to the South Texas brush county, the western Edwards Plateau and the Trans-Pecos. According to the Texas Parks & Wildlife Department, which has conducted aerial surveys of javelina populations, Texas harbors about 200,000 javelinas. That’s more than exist in Arizona and New Mexico. It’s still a small number compared to the estimated 1.5 million wild hogs in Texas, which compete with javelinas for natural sources of food. Another pressure on javelina populations is habitat loss as landowners clear land for agriculture and other uses.

Despite these threats, “javelinas are doing very well in South Texas,” says Chico Barrera, a Kingsville-based TPWD natural resources specialist. “As long as you don’t disturb their groups, they thrive in oak and mesquite mottes and mixed-brush communities.” South of Kingsville, sprawling ranches like the King and Kenedy harbor large populations of javelinas.

The javelina is also a cultural icon in South Texas, starring as the official mascot for Texas A&M University-Kingsville’s athletic programs. Students chose the javelina as the school mascot in 1925 for its fierce and tenacious behavior. A striking javelina sculpture, Leaders of the Pack, graces the campus entrance.

Like human athletes, the javelina is a team player with a strong, protective loyalty to the herd. Their toughness, perseverance and resiliency are traits we can all admire.

“Javelinas play a role in everything that comes with a native landscape,” Skiles says. “Once you experience javelinas on a peaceful basis, you realize they add a remarkable richness to our lives.”