The street artist's work, on view through SXSW in March, is one of the featured exhibits at the airport's public art program 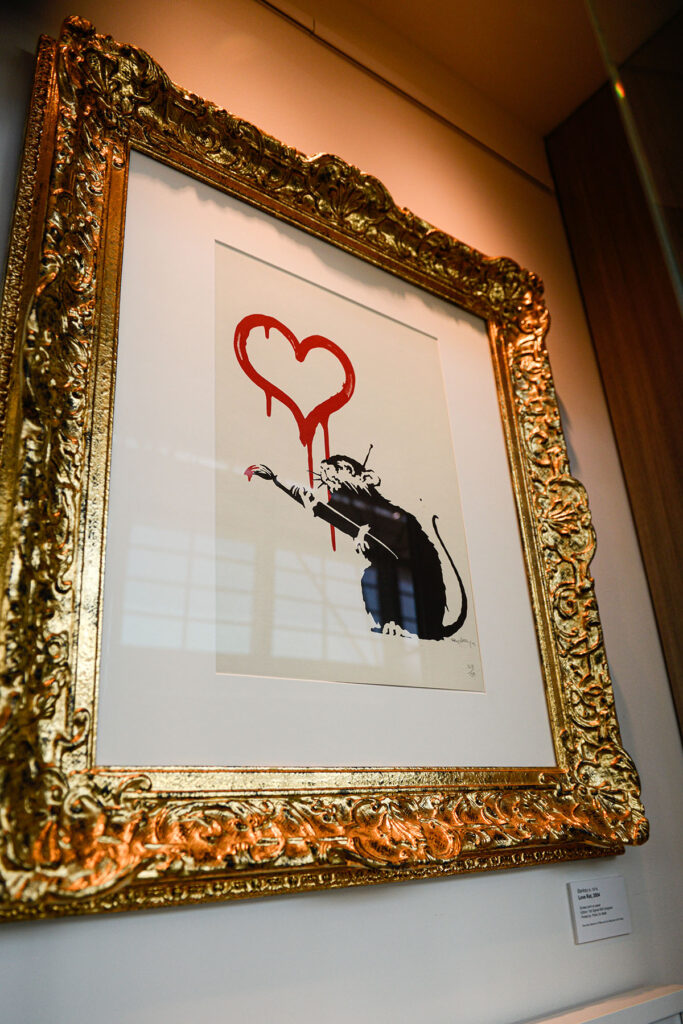 One of Austin’s most interesting small art galleries isn’t downtown. It isn’t on the University of Texas campus, or near the fashionable Domain shopping and dining district, or on the hip East Side. It’s at the airport and, at the moment, it has a few Banksys.

Since 1999, Austin-Bergstrom International Airport has been home to an intriguing art collection both permanent and rotating. And what better way to while away the hours waiting for your next (possibly delayed) flight to LaGuardia or DFW than looking at art? It’s even possible that more eyes have seen the art at Bergstrom than at the Louvre in Paris: In 2019, the museum hosted 9.6 million visitors, while 17 million folks traipsed through Austin-Bergstrom.

Currently, the Changing Exhibit program at the Clarksville Gallery, near the men’s restroom across from Gate 10, features five prints and a sculpture by the English pseudonymous street artist Banksy. The prints are “Laugh Now Monkey,” “Happy Choppers,” “Girl with Balloon,” “Love Rat,” and “Kate Moss—Original Colourway.” The sculpture, “Watchtower,” is a rarity for Banksy, whose real identity remains unknown but whose street art is famous for its distinctive stencil style and subversive social commentary. The Banksy pieces are on loan from collectors Lou Resig, his wife, Tiffany, and his brother, John Resig. The brothers founded the website The Chive and the streaming service Atmosphere TV.

“The five prints show viewers a good range [of Banksy’s work],” says Cory Anne Hurless, the airport program manager who oversees the Changing Exhibits program. “‘Girl with Balloon’ serves to draw people to the exhibit, and the other works are not as well-known but I think represent well the artist’s humor and inspiration from art history.”

“I was so excited to see that the collectors had a small 3D Banksy piece—“Watchtower” is a hand-carved wood sculpture and is very rare,” Hurless says. “I think that will really surprise travelers.” 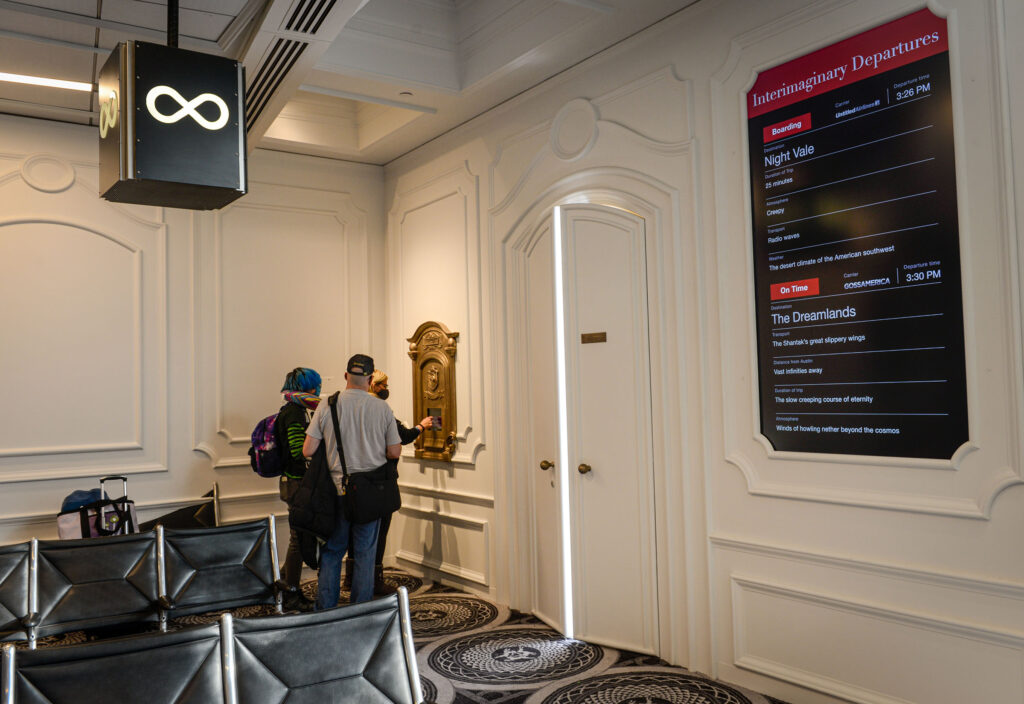 The Permanent Public Artwork, on the other hand, is part of the Austin’s Art In Public Places collection. The city’s program partners with the airport to bring in large-scale public artwork. The newest is “Interimaginary Departures,” a playful, interactive experiential installation by Brooklyn-based artist Janet Zweig. Located between gates 12 and 14 in the terminal, it was developed and commissioned by Art In Public Places and is essentially a fake gate featuring, like the title says, imaginary destinations.

Zweig says the piece was inspired by 3D computer rendering and author China Miéville’s novel The City and the City, about two cities existing within the same space. The piece features two screens displaying rotating flight information for hundreds of imaginary destinations, from the Wizard of Oz’s Emerald City to Gallifrey, the homeworld (aka, the planet) of Doctor Who’s Time Lords. Every few minutes, an overhead loudspeaker provides boarding information about the fictional locations.

“Interimaginary Departures” represents the culmination of four years of hard work by a world-class artist, local Austin fabricators, and the city of Austin staff,” says Sylnovia Holt-Rabb, acting director for the City of Austin Economic Development Department. “It’s one of the most complex public art projects we’ve ever commissioned.”

Travelers can also visit a cast bronze touchscreen kiosk and take a brief survey with multiple choice questions such as “Are more things smaller than you or larger than you?” It then prints out a souvenir boarding pass to the travelers’ next inter-imaginary destination. Bon voyage!

The Banksy exhibit is up at the Austin-Bergstrom International Airport through the South By Southwest festival, slated for March 11-20, 2022.