The new sculpture complements the musician's resting place at Laurel Land Memorial Park in south Dallas and the statue of his likeness at Auditorium Shores in Austin. 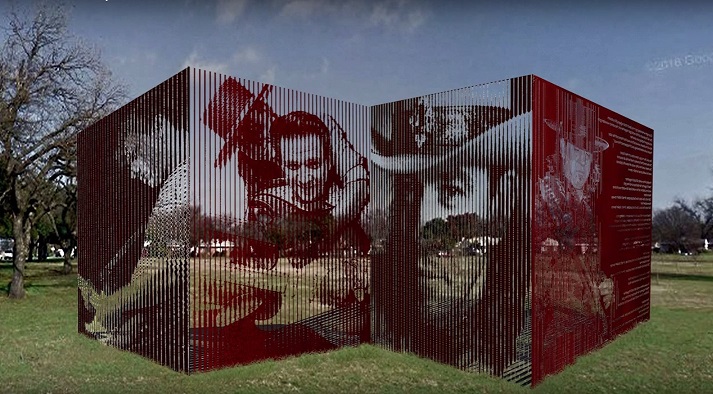 A rendering of the memorial. Artist rendering courtesy Casto Solano.

Thirty years doesn’t seem that long ago when Stevie Ray Vaughan comes to mind. The memories are too fresh: driving to work and muttering to myself about not getting a callback from Hanna Bolte, the publicist who was supposed to be setting up a phone interview with Stevie and his brother, Jimmie, in anticipation of their collaborative album Family Style; then walking into the office and hearing the terrible news.

My work colleague Betty Layton, the wife of Double Trouble drummer Chris Layton, had gotten the call. Stevie died along with three others when the helicopter they were in slammed into a hillside as it was lifting off in the fog from Alpine Valley, Wisconsin. It was just an hour after he closed out a big outdoor show where he engaged in a guitar shootout with his brother Jimmie, Eric Clapton, Robert Cray, and Buddy Guy to the song “Sweet Home Chicago.”

Today, SRV is a Texas legend and the standard for modern electric blues guitar. No other six-string musician since has come close to his unbridled ferocity, intensity, and versatility as a guitarist. While his music is everywhere, few touchstones exist for fans to connect with beyond his gravesite at Laurel Land Memorial Park in south Dallas and the statue of his likeness with bolero hat and serape at Auditorium Shores, across Lady Bird Lake from Downtown Austin.

A third touchstone is on the verge of complementing the other two.

Drive just past the entrance of Kiest Park in the Oak Cliff neighborhood of greater Dallas, about five blocks from Glenfield Avenue where the Vaughan brothers grew up, and you’ll see a four-piece accordion wall wrapped in yellow Tyvek wrapping.

Under the wrapping is the four-panel artwork of Spanish sculptor Casto Solano: the first being a close-up of Stevie, accompanied by the lyrics to “Tick Tock;” the second, a portrayal of Jimmie playing guitar; the third, an iconic depiction of the Vaughan brothers playing guitar together as adults (replacing the third panel in the artist’s rendering); and the fourth panel, a childhood photo of both boys at home.

The public art, commissioned by the City of Dallas, was scheduled to be dedicated March 20. COVID-19 canceled the event and held up applying finishing touches to the memorial, as parks personnel as well as other city employees were furloughed during the worst of the pandemic.

But now the Vaughan brothers tribute appears back on track for completion, according to Kirby Warnock, the former Oak Cliff resident who raised $68,000 to pay for the artwork’s maintenance over the next 10 to 20 years.

“I’m hoping to get word from the city about a firm dedication date sometime in the next week or so,” he says. “Landscaping still needs to be done. The city has to clean the artwork, spray it with saltwater to get a consistent color—it’s a weathered steel—and put up the dedication plaque.”

It’s been a five-year labor of love for Warnock, a former editor of Buddy, a Dallas music magazine that began publishing in 1972, and director of the film documentary When Dallas Rocked.

“While I was doing that film, people talked a lot about this great music scene that existed in Dallas but had disappeared,” Warnock says. “I kept thinking there needed something to mark the moment and recognize what we had here. … Jimmie and Stevie may have gotten famous playing in Austin, but it all started in Oak Cliff, playing in bands, and at Kiest Park.”

Jimmie told Warnock that he and his little brother played in Kiest Park as kids, and that the park was a shortcut Stevie used on his way to and from Kimball High School.

Warnock is completing a distribution deal for his own personal project to complement the dedication of the Vaughan brothers artwork: a documentary film tentatively titled From Nowhere: The Story of the Vaughan Brothers. In addition to never-seen-before footage of both Vaughans, Jimmie speaks honestly and emotionally about the tragedy that happened thirty years ago on Aug. 27, 1990, the day that remains fresh in the minds of those who remember.