Plan a Starry, Starry Night of Van Gogh’s Work as the Artist Takes Over Texas 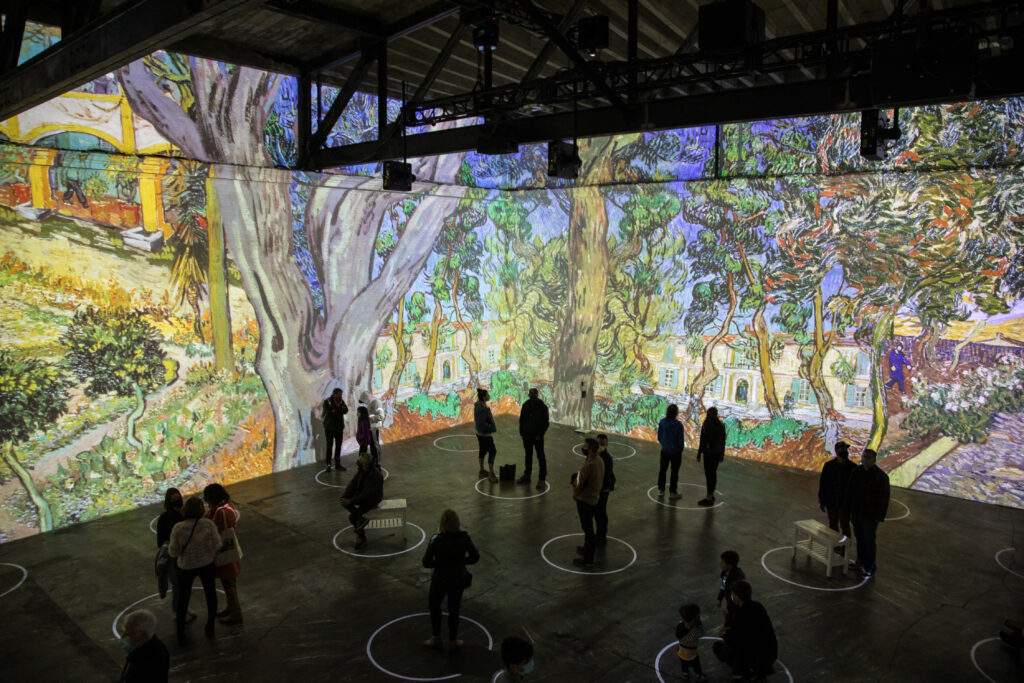 The Dutch master’s work is projected to create a different kind of art-viewing experience at the “Immersive Van Gogh.” Photo by Cheshire Issacs.

Although considered unsuccessful during his lifetime, Vincent van Gogh is posthumously one of the most influential painters in fine art. With shows featuring his work traveling across Texas, you won’t want to miss out on seeing some of the Dutch post-impressionist’s masterpieces. From traditional gallery shows to dueling immersive experiences, there are plenty of cities showcasing Van Gogh’s work—some presenting it like you’ve never seen before.

There are a few days left to check out Hockney-Van Gogh: The Joy of Nature at the Museum of Fine Arts, Houston. This exhibition showcases Van Gogh’s fascination with nature by examining the common ground he shares with British artist David Hockney. Museumgoers can compare 10 original paintings and drawings by Van Gogh, displayed side by side, to roughly 50 of Hockney’s vibrant works. Originally premiering at the Van Gogh Museum in Amsterdam, this is the first time the artists have been paired in an American museum exhibition and the only location in the United States. The show ends June 20.

Want to see the artist’s masterpieces in a whole new light? Head to Dallas, Houston, or San Antonio for Immersive Van Gogh. This massive show surrounds viewers with projections of the artist’s works. Created by Italian installation artist Massimiliano Siccardi and set to music composed by Italian composer Luca Longobardi, this is the same show seen by over 2 million people in Paris. The exhibit premieres in Dallas (June 17-Sept. 6), then opens in Houston (Aug. 12-Oct. 10) and San Antonio (Nov. 18-Feb. 6). Tickets can be purchased here.

If you miss Immersive Van Gogh, no worries. Van Gogh: The Immersive Experience is another exhibition featuring the artist’s masterpieces through projected images. This time, two-story projections cover 20,000 square feet and allow viewers to be enveloped in 360 degrees of Van Gogh. Additionally, step into Van Gogh’s life through “A day in the life of the Artist,” a virtual reality interactive experience that lets viewers walk through his bedroom in the Yellow House (the house Van Gogh lived in while in Arles, France) and learn about the inspiration for some of his other iconic works.

“The personality, the life, the achievements of such a great artist, painting over 900 paintings and 1,100 drawings in nine years of his life—he started painting at the age of 28 until his death at the age of 37—this is what really caught my attention and imagination to create a complete digital immersive experience,” Mario Iacampo, CEO of Exhibition Hub, who partnered with Fever to create the exhibit, says via email.

The interactive exhibit opens in Dallas on July 5 and runs until Nov. 28, then runs simultaneously in Houston Aug. 30 through Jan. 2. Tickets can be purchased for Dallas here and Houston here.

But wait—there’s more. Another traveling exhibit, Beyond Van Gogh: The Immersive Experience, opens June 25 in Austin. This exhibit runs until Aug. 8 at Circuit of the Americas. Designed by Mathieu St-Arnaud, creative director of Normal Studio, a creative studio in Montreal that focuses on immersive experiences, and his team, the exhibit showcases more than 300 of Van Gogh’s works and uses his dreams, thoughts, and words to create a narrative that accompanies the visual art. “Through his own words set to a symphonic score, we may come to a new appreciation of this tortured artist’s stunning work,” the show’s website states. Purchase tickets here.

And lastly, there’s another opportunity to see Van Gogh’s work in real life. Debuting in late October at the Dallas Museum of Art is Van Gogh and the Olive Groves, the first exhibition dedicated to the olive grove paintings Van Gogh created during his time at the Saint-Rémy-de-Provence asylum. Co-organized by the Dallas Museum of Art and the Van Gogh Museum in Amsterdam, the exhibit displays all 15 paintings in the series and runs until early next February, when it travels to Amsterdam to be displayed there.