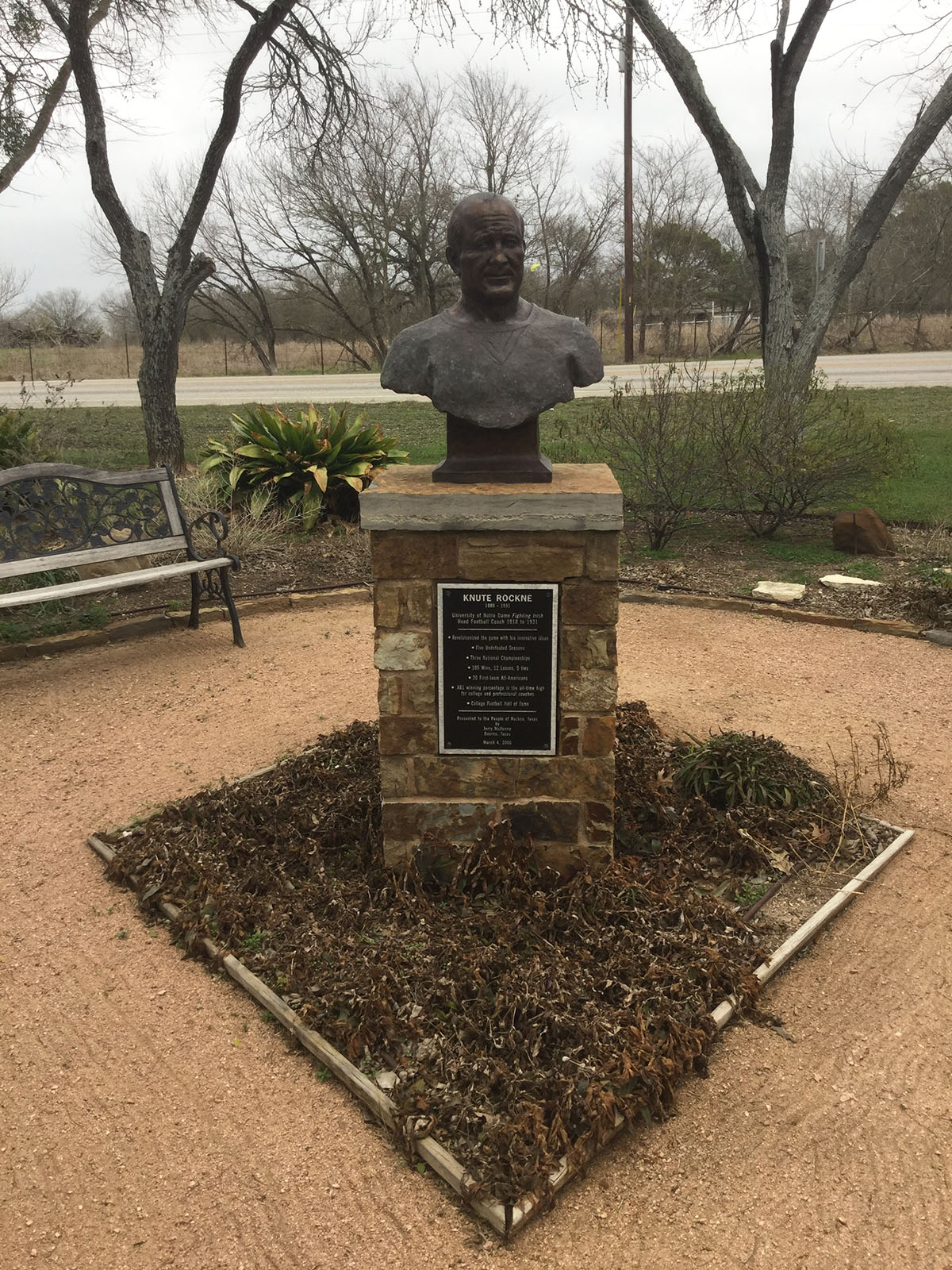 Drive on Farm-to-Market Road 535 through the Bastrop County town of Rockne and you may notice a bronze bust on a stone pedestal surrounded by a meditative garden. It stands in front of the Rockne Museum, where artifacts, documents, and other town history are on display. The bust represents the town’s namesake, college football coach Knute Rockne.

Even though Rockne was born in Voss, Norway, and never lived in Texas, he is the namesake of this small town (pop. 250) because of his association with the private, Catholic University of Notre Dame in South Bend, Indiana. He played there and coached The Fighting Irish football team until his untimely death in a plane crash in Kansas on March 31, 1931. His passing was a national tragedy, and because Hilbigville was a strongly Catholic community, the citizens decided to change the hamlet’s name in his honor.

The detailed likeness of the coach, who was born on March 4, 1888, was sculpted by Notre Dame graduate Larry McKenna of Boerne. A noted sculptor, with more than 200 public statues around the world, McKenna donated the bust and it was dedicated in March 2006 to coincide with the 75th anniversary of Rockne’s death. Grandson Nils Rockne spoke at that ceremony.

Despite sculpting bronze statues of Rockne for places like Notre Dame Stadium, the College Football Hall of Fame, and Rockne’s birthplace in Norway, McKenna only learned there was a Texas town named after the coach when a nun in Boerne told him about 20 years ago.

Sister Mary Agnes grew up a Goertz, one of the German families that settled Rockne in the 1850s. While in elementary school, she participated in the 1931 vote to rename the town at the behest of Humble Oil, which had opened a refinery there in the late 1920s. “Everybody called it Hilbigville after the family that owned the grocery store, but it was not an official name,” says Ovon Goertz, director of the Rockne Museum.

The town settled on two finalists, Rockne and Kilmer (after American writer and poet Joyce Kilmer—again, no direct connection to Texas), and assigned the children of Sacred Hearts Catholic School to vote for what should be their new town name. “It was a tie,” Goertz says, “so Father Stobel sent the kids home to discuss the choice with their parents. Edith Goertz’s father was a big Notre Dame fan, so she changed her vote.”

Goertz says the vote was probably so close because the female students thought they were choosing a woman named Joyce, not the male poet of “Trees” who was killed in action in France during World War I.

Rockne’s post office was closed long ago, but it reopened for a single day in March 1988 when the 22-cent Knute Rockne stamp was issued by the U.S. Postal Service. The commemorative stamp came out during President Ronald Reagan’s last year in office. Reagan, of course, famously played George Gipp—immortalized in Rockne’s “win one for the Gipper” halftime speech—in the 1940 film Knute Rockne, All American.

The building that once housed the old Hilbigville grocery store is still a big part of Rockne. Leon Goertz bought it in 1969 and turned it into Leon’s Country Store, one of the most charming dive bars in the state—and it happens to be located next to Sacred Heart. From Saturday night to Sunday morning, it’s a football field-size distance between what goes on at the beer joint and at the church. But that seems about right in the town named after the coach who popularized the forward pass.