With little to go by, we discover how this fanciful Gulf Coast attraction came into existence 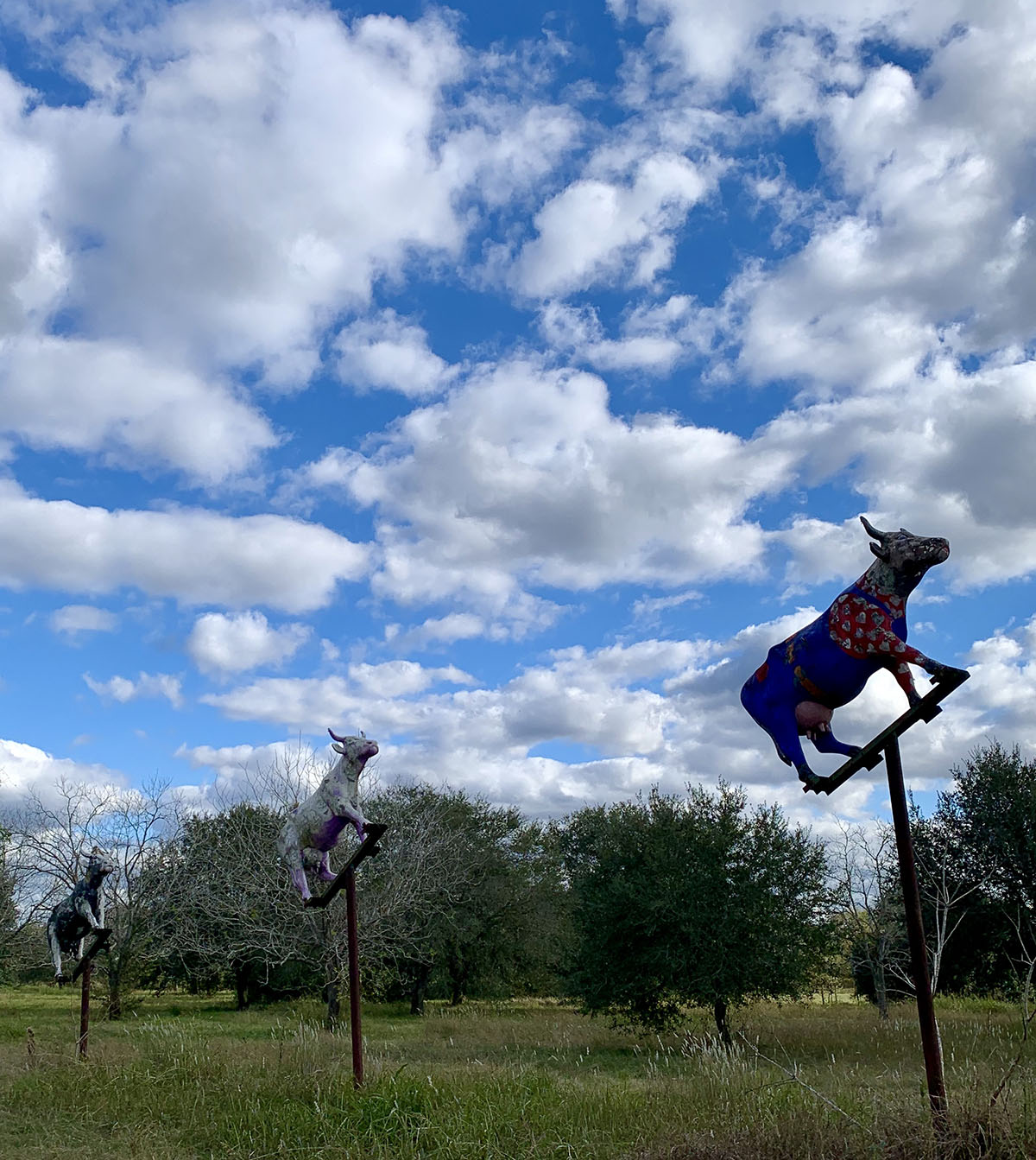 The tip was cryptic, even by some of the other bare-bones offerings at Roadside America, a popular website for “offbeat tourist attractions.”

“Just driving along and all of a sudden… jumping cows and other sculptures appear to make you smile. No explanations,” read the listing. This attraction was simply named “Cows Jump,” and along with a picture and an address—3821 Farm-to-Market Road 359, Richmond—the tipster’s description was all I had to go on as I headed north on State Highway 36 on a crisp and bright winter afternoon, passing through the soggy fallow cotton fields of Brazoria and Fort Bend counties.

On my arrival at the furnished address, I found a scene much as described: Installed to appear as if ascending heavenward, one after the other in a sort of rapture of the bovine, was a trio of multicolored, fiberglass cows, identical in frame if varied in hand-painted coloration and weathered exposure. And yes, there were a few other sculptures fashioned out of scrap metal and tending more toward the abstract. And, as promised, there was no explanation whatsoever.

What the listing hadn’t mentioned was that the wild moo-yonder-bound trio take off across the street from the Swinging Door, a landmark Southeast Texas barbecue palace.

In a decades-long Dark Ages, Houston lagged behind much of the rest of Texas in quality brisket, but the Swinging Door was a notable exception. Bayou City ’cuennoiseurs would trek out here for a whiff of clean country air and a bellyful of pecan-smoked beef and ice cold beer. During the joint’s late ’70s and early ’80s heyday, Houston “awl bidness” honchos and their Saudi prince pals often beat the traffic from the oil fields by arriving in choppers, touching down at an adjacent heliport cleared by Swinging Door owner Steve Onstad. Once inside, they might find themselves hoisting a few with Houston Oiler legends Earl Campbell, Dan Pastorini, and coach Bum Phillips, who owned a ranch nearby.

As I picked my way in my city-slicker hippie sandals through this soggy and thorny pasture dotted with wacky art, a sense of déjà vu dawned over me. This place strongly reminded me of the Eclectic Menagerie, a similarly off-the-wall and random assemblage of animal sculpture and abstract art fashioned out of oil patch detritus arranged alongside a highway—in that case, State Highway 288, just south of the Astrodome. Both displays offer no explanation for their existence, and both are home to strikingly similar works. In fact, the Eclectic Menagerie is also home to a trio of painted bovines suspended in the air, albeit with the Houstonian heifers grazing side by side upon a sort of hovering lily pad instead of the nose-to-tail ascension into the great moo-yonder you see here.

This could be no coincidence. Either the same artist was at work 27 miles to the east, or we had a case of conceptual copycattle rustling.

Well, it turns out these places look alike because the same family fostered the creation of both—the Rubinsteins of Houston, current patrons of the Eclectic Menagerie at their Texas Pipe & Supply headquarters and one-time owners of the FM 359 property.

That’s according to Peyton Martin, a local real estate developer who now owns this artsy pasture along with the Dry Creek Social Club, an indoor-outdoor upscale beer joint/music venue/crawfish boil restaurant next door.

Both trios of skyward steers are relics of the once 325-strong herd from the citywide CowParade Houston 2001. Similar to cow parades in other cities, this wildly popular charity drive found philanthropists purchasing plain white metal-framed fiberglass steers, adorning them as they saw fit, displaying them around Houston for a few weeks, and then auctioning them off to anyone willing to give them forever homes. Some of the cows honored artists, as in the cases of “Georgia O’Beef,” “Moogritte,” “Moondrian,” and “Salvador Cowli.” Others, like “Holsteen Cowlajuwon,” paid homage to local sports heroes, and there were two Elvis-themed entries in “Love Me Tenderloin” and “Elvis Cowsley in Grazeland.”

Like the mighty cloud of dust trailing a great herd on a dry trail, the Houston air was thick with terrible puns.

According to Martin, this particular trio now rises over what had formerly been a chunk of the Rubinstein family’s country getaway. As such, and along with the other sculptures, it served as a sort of precursor or country cousin to the larger and more prominent Eclectic Menagerie.

But change is coming, Martin says. What remains of this partially rural section of Fort Bend County is rapidly suburbanizing, and this stretch of two-lane FM 359 is set to become five lanes, thereby chipping away at this pastureland. Which seems to leave these wafting heifers locked on the horns of a dilemma, as their launching pad will also be changing in other ways.

“We’re going to be developing that tract,” says Martin, “but I am a big believer in history, so we will be keeping the statues and deploying them to strategic areas where they will be visible for generations to come.”

Preservation! What an udderly mooving sentiment.