Texas Beaches Are Awash In Baby Dolls, Messages in a Bottle, and Other Oddities

Thanks to the Gulf of Mexico loop current, debris comes ashore from all over the world 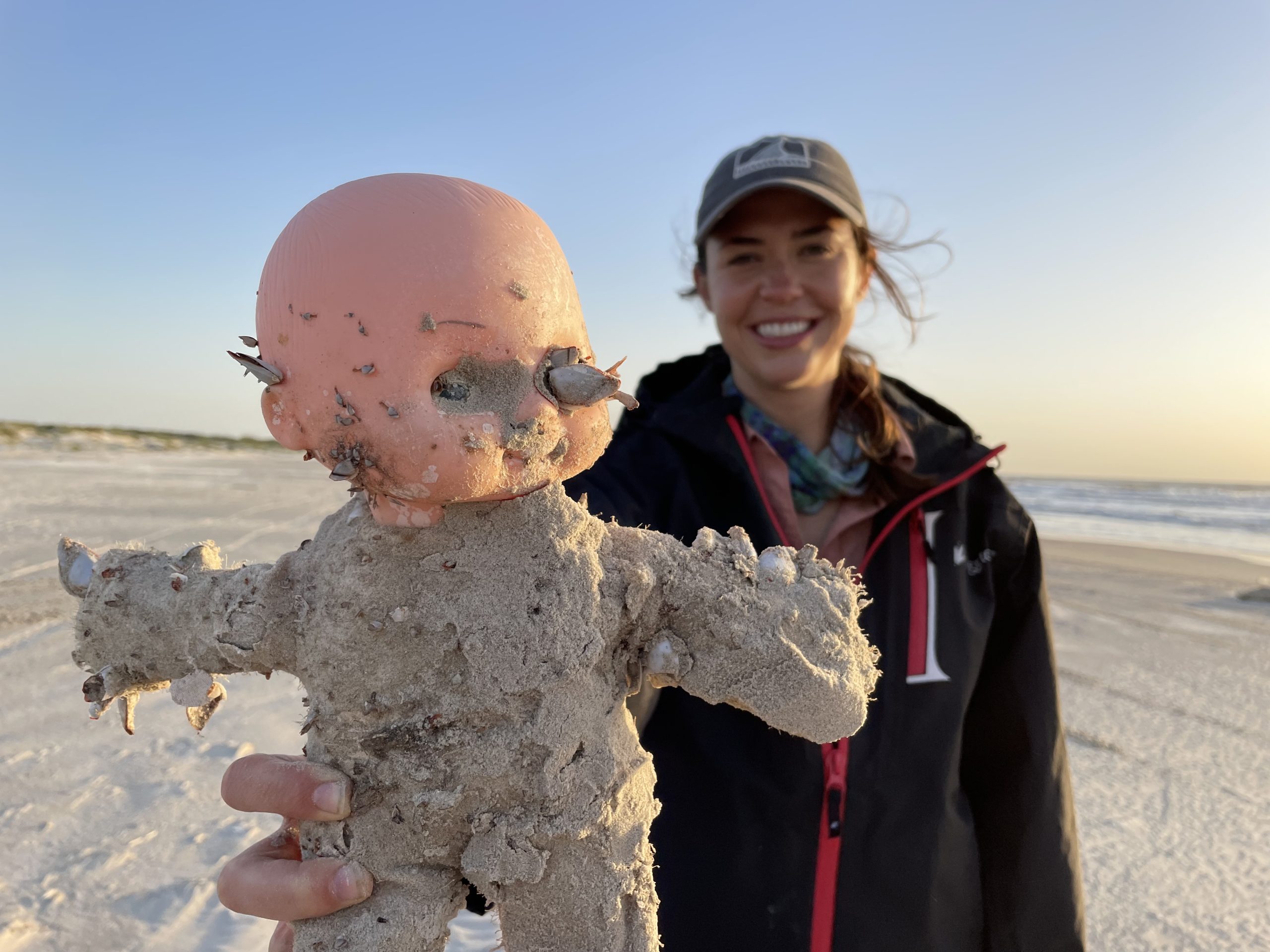 A researcher with the Mission Aransas Reserve finds a baby doll on the Gulf coast with a barnacle sticking out of its eye. Photo by Jace Tunnell

An excessive amount of trash—or treasure, for some people—has been known to wash up on Texas beaches. But along with the typical litter one would expect to find, such as soda cans, plastic bags, and cigarette buds, a recent oddity has been an assortment of children’s dolls—and not exactly the cute and endearing kind.

Researchers from the Mission-Aransas National Estuarine Research Reserve first noticed the creepy toys while searching for endangered sea turtles in the winter of 2019. They were found along a 40-mile stretch of the Coastal Bend of Texas. A couple dolls would show up every month, and as of this year, researchers have collected a total of around 30 dolls.

Most of the baby dolls have been wrapped in barnacle and have missing limbs and distorted features due to their time spent in the water—creating a scene worthy of a horror movie.

After the researchers posted photos of their findings on the reserve’s social media accounts like Facebook, comedian and host of HBO’s Last Week Tonight John Oliver caught wind of the abandoned toys and offered to buy them with a $10,000 donation to the Mission-Aransas Reserve’s turtle marine wildlife rehabilitation program. What did he intend to do with the dolls?

“Burn them! Burn them now! I hate those dolls! I hate them so much,” he said in last week’s episode.

Finding debris like this is not all that unusual, according to Jace Tunnell, reserve director of the Marine Science Institute in Port Aransas. He says Texas beaches have 10 times more trash than anywhere else in the Gulf of Mexico.

“We find stuff from all over the world, and it has to do with this loop current that comes around the Yucatan Peninsula, and then loops up and goes back down around Florida and gets into the Gulf Stream,” Tunnell says.

The National Oceanic and Atmospheric Administration describes the Gulf of Mexico loop current as “one of the fastest currents in the Atlantic,” bringing warm water from the Caribbean into the Gulf, which can intensify the strength of a hurricane.

Aside from horrifying doll body parts, Tunnell says other interesting debris they’ve found includes several messages in bottles. One of these finds was written in French by a 12-year-old girl traveling around the world with her parents on a sailboat.

“They threw a bottle into the ocean as they went across the equator off the coast of Brazil, and I ended up finding the message in a bottle about 13 months after she had thrown the bottle in there,” he says. After getting the writing translated, he figured out the family’s address and contacted them via a traditional mailed letter. “About a month later, they wrote me back, and they showed me pictures of their boat and where they were staying in France,” he says.

In addition, Tunnel and his team have found about six bales of rubber from a ship the United States sunk off the coast of Brazil back in 1944 during World War II. With Texas beaches ending up with oddities like these from all over the world, most would love to know where all of it is coming from­—especially the dolls. Unfortunately, it is almost impossible to track their original location, according to Tunnell.

Every March, the Mission Aransas Reserve raises funds by holding an auction for all of the debris they’ve found throughout the year, including the dolls. (The most someone was willing to pay for a disturbing doll? $35.) More importantly, the interesting finds are also used to catch the attention of readers and educate them on the preservation of Texas beaches. Along with every creepy doll photo, Tunnell says they attach a serene landscape of the beach.

“That’s what we really want to educate people on,” Tunnell says, “When people find a connection to the ocean or to the beach, they tend to care about it and want to protect it, and that’s really our ultimate goal: to protect these natural places so that they’re here for the next generation.”

As for taking up Oliver’s request to buy the dolls, Tunnell says they are interested in his offer but have yet to hear back from the host.