Where to See the Most Historic Bat Roost in Texas 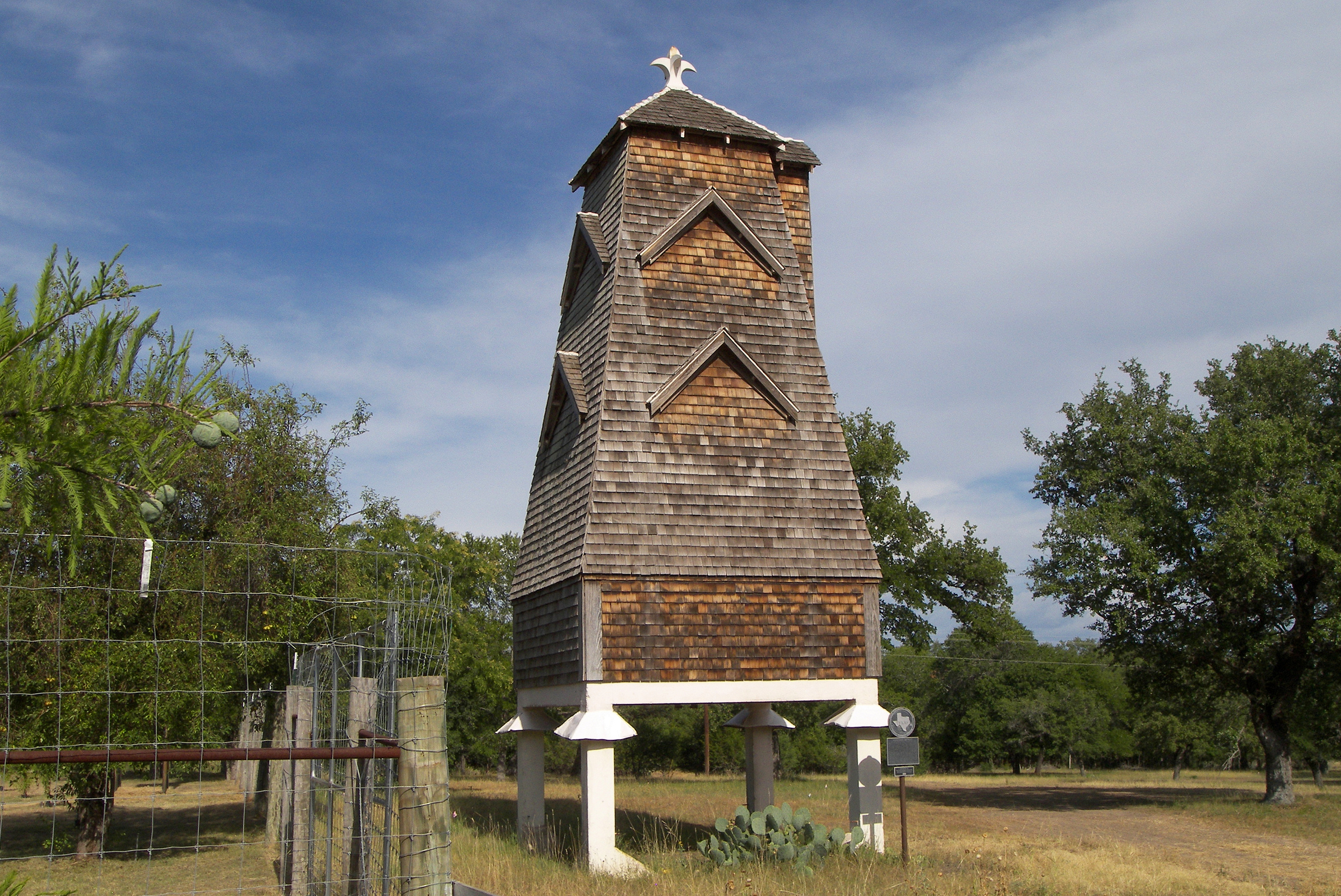 On summer nights in the Hill Country, rivers of Mexican free-tail bats stream out of caves and abandoned buildings, spiraling up to hunt in the skies. One colony of bats emerges from a strange, 30-foot-high structure that resembles a church steeple on stilts, with pyramidal shingles, and is visible from a public road in the Kendall County town of Comfort.

If the gate’s open, you can go and walk underneath and smell the faint old scent of guano at the Hygieostatic Bat Roost. Named after the greek words “hygiea” (health) and “stasis” (standing), it is one of the final remnants of a malaria control scheme that predates the use of pesticides, which still has its uses today.

At the beginning of the 20th century, malaria and other mosquito-borne diseases stalked the lowlands of Texas. In Lake Mitchell on the outskirts of San Antonio, sewage flowed into the waters and spilled out into the marshes and seepage ponds, breeding ravenous swarms of mosquitoes. Farmers and hunters that attempted to go abroad at night were set upon by the bloodsucking swarms: livestock withered under the assault.

Enter Dr. Charles A. Campbell, the former city bacteriologist in San Antonio. Campbell—noting bats’ appetite for mosquitos—hit upon the idea of hosting bats as a means of pest control. “Can bats like bees be colonized and made to multiply where we want them?” he wrote. “This would be no feat at all!…Don’t they just live in any old ramshackle building? They would be only too glad to have a little home.”

In 1907, Campbell invested $500 ($13,356 today) to build a large bat tower on posts at the U.S. Experimental Farm near San Antonio. But colonizing bats proved more difficult than he’d expected: despite desperate attempts—including installing hundreds of bats in the house—wild bats stayed away in droves. The only animals using Campbell’s bat house were a chattering colony of english sparrows. The mosquitos swarmed as voraciously as ever.

Discouraged, Campbell decamped to the mountains of West Texas, where he spent time exploring bat-inhabited caves to try and work out what had gone wrong. In 1911, he was ready to try again, building his second bat house in Lake Mitchell. The new model was located near water and had a honeycombed interior, with seven feet of space at the bottom for the colony’s guano to be collected for fertilizer.

After a few months, Campbell returned to find it hosting a population of freetail bats. To boost the size of the colony, Campbell blasted brass band recordings at nearby abandoned buildings to drive out the local bats, which promptly took up residence in the nearby bat tower. At its height, the Mitchell Lake colony may have hosted half a million bats: their nightly departure took two hours.

The results spoke for themselves. In 1914, Campbell collected testimonials from farmers in Mitchell’s Lake: farmers were able to work their fields after dusk, hunters were no longer driven from their duck blinds, and the malaria rate, formerly around 80%, had dropped to nothing. Soon 16 bat towers had sprung up throughout Texas, with others being built as far afield as Italy.) In 1917, the governor signed a law making it a misdemeanor to kill a bat in Texas. Two years later, Campbell was officially nominated by the state for a Nobel Prize in his work.

Campbell’s bat towers fell on hard times after he died in 1931. After World War II, the job of mosquito control was given over to cheap pesticides like DDT. Meanwhile, a rabies scare in the 1950s led to bats losing their protected status in Texas. The bat towers were shunned; neglect, vandalism and development wiped them away. Only two remain: The Hygiostatic Bat Roost in Comfort, and a similar tower in Orange. Both are on private land.

But Campbell may have the last laugh. While pesticides have been cheaper in the short term, they’ve also wiped out beneficial insects and poisoned birds. Bats, meanwhile, have been coming back into fashion for pest control. One example is Bracken cave, a sinkhole outside of San Antonio that houses over 20 million Mexican free-tailed bats. According to Fran Hutchins of Bat Conservation International, this cave holds the largest mammal colony in the world, and the nightly bat flights hoover up 147 tons of insects a night, saving cotton farmers $750,000 in crop damage and pesticides. “If you’re an organic farmer, bats are a non-pesticide way of controlling insects in your orchards,” Hutchins says. “People growing pecans, peaches, and apples all try and attract them.”

Modern bat towers have advanced since Campbell’s day and are used for both agriculture and to rehome bats that have moved into inconvenient places. But the remains of Cambell’s great experiment can still be found 1.5 miles east of Comfort, on the south side of FM 473. The structure is an early symbol of how to healthily engage with nature, and it’s still standing.