With a New Trail, Canyon Lake Gorge Offers a Revealing Perspective of Its Hill Country Geology

A 2002 flood over the Canyon Lake spillway carved the gorge, which is up to 50 feet deep and stretches more than a mile long. 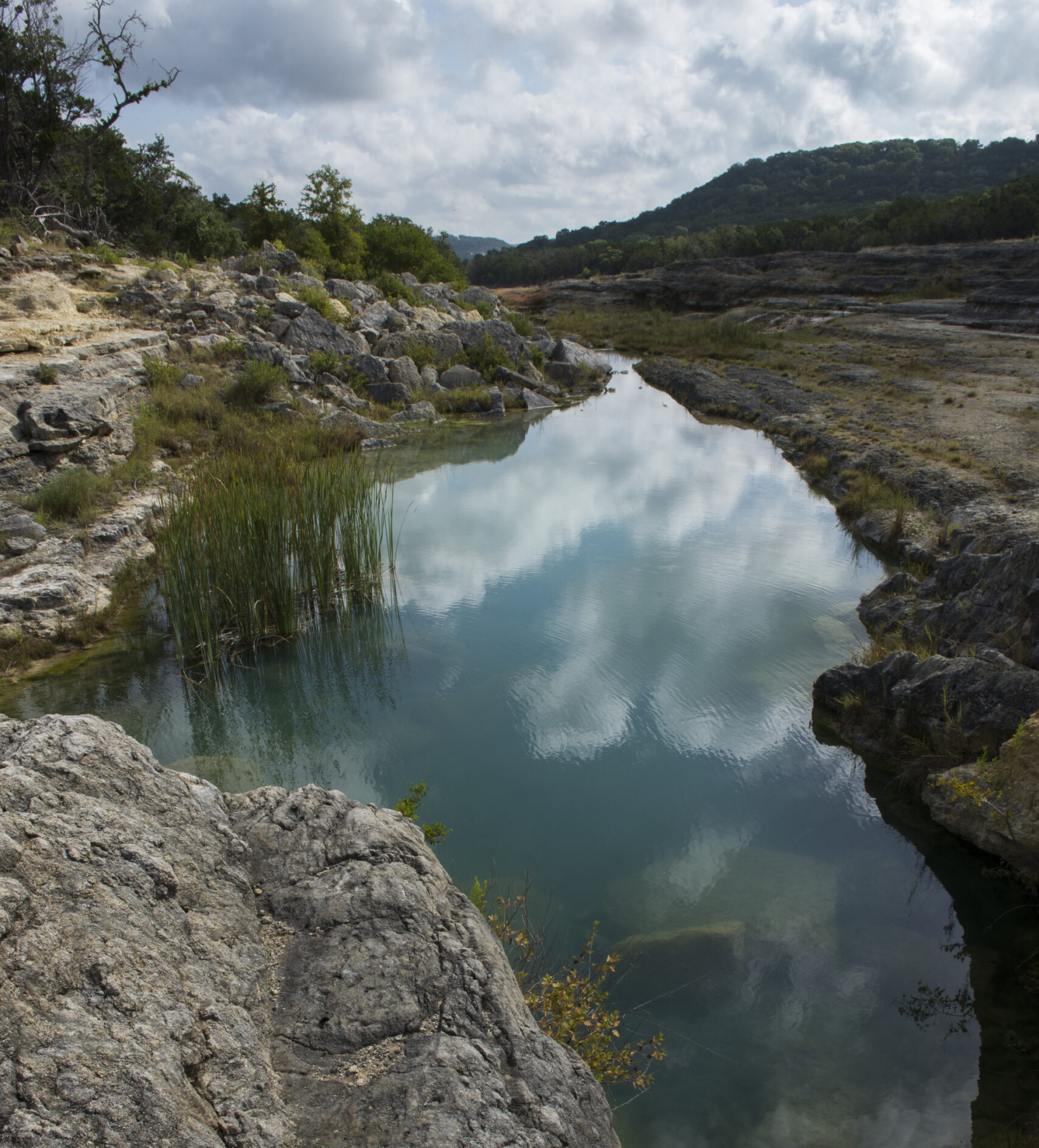 Carved into the Central Texas Hill Country two decades ago by a one-of-a-kind flood, the Canyon Lake Gorge is one of the Lone Star State’s lesser-known natural treasures. But a new trail is now offering the public a spectacular view of its limestone cliffs, lagoons, waterfalls, and geologic formations created 110 million years ago.

Opened in mid-November, the Overlook Trail has already given several thousand visitors an opportunity to enjoy what Park Ranger Michael Riordon calls “a geologic wonder,” located about 20 miles northwest of New Braunfels. The moderate, out-and-back trail leads hikers on an easy, 2-mile self-guided trip along the gorge’s northern rim. The trail opened with a ribbon-cutting ceremony on Nov. 13 along with a new gorge headquarters and visitors center.

“This has been in our master plan since 2007 to open these trails,” says Jaynellen Kerr, who has been at the gorge for 14 years as natural resources specialist Guadalupe-Blanco River Authority, which manages the property. “We’re super excited to get the families out in nature.”

Unlike Palo Duro Canyon and other openings in the earth that took millions of years to create, the Canyon Lake Gorge came into existence in six days.

In 2002, a deluge that dropped more than 30 inches of rain in the upper Guadalupe River watershed sent floodwaters over Canyon Lake’s spillway for the first time in its history, creating enough hydrological power to excavate more than 300,000 tons of earth and other material. The area previously had been relatively flat and indistinctive, marked by a shallow creek. The floods radically transformed the area, leaving a slice in the ground up to 50 feet deep that runs more than a mile long and spans between 50 to 150 feet wide.

The spectacular opening exposed previously unseen remnants from the Cretaceous Period, including dinosaur tracks, thousands of fossils, and the shoreline of an ancient sea.

The Guadalupe-Blanco River Authority has offered three-hour guided tours of the natural attraction since it opened to the public in 2007. The added trails are part of continued effort to broaden the gorge’s profile and make it more accessible to families and children.

Younger visitors are now able to check out “adventure” kits to use along the trails. The grey backpacks include binoculars, magnifying glasses, compasses, and instructions for scavenger hunts.

The three-hour tours, which cost $20, begin on the spillway and stretch down into the gorge. A shorter, 90-minute tour, costs $15. No one under 7 is permitted on the tours, but children of all ages, including those in strollers, are permitted on the trails.

Though dinosaur tracks are visible only to those who tour the gorge, there are plenty of other features to see for those who follow the Overlook Trail. Eight “nodes” along the way serve as stopping points for a more prolonged study of some of the gorge’s showcase features. Perfectly preserved fossils of aquatic creatures, such as sea urchins and clam-like bivalves, have been found everywhere throughout the gorge. On hikes, Riordon pointed out fossilized ripples from the shoreline of the exposed sea.

A fault that was uncovered by the flood has proved to be an educational resource for geologists, who come to the gorge and spend hours studying and exploring the fault. Teachers often bring classes to view the gorge and surrounding landscape, Riordon said.

The gorge is owned by the U.S. Army Corps of Engineers and leased to the managing GBRA. A volunteer citizens group, the Gorge Preservation Society, has been instrumental in developing and running the gorge and raised half the $200,000 cost of the new trail.

Volunteers began working on the trail in 2006, even before it was officially launched in the master plan, and have spent the last 15 years clearing vegetation, removing rocks, installing infrastructure, and doing whatever else was necessary to get the Overlook Trail up and running. Their designation: “Trailblazers.”