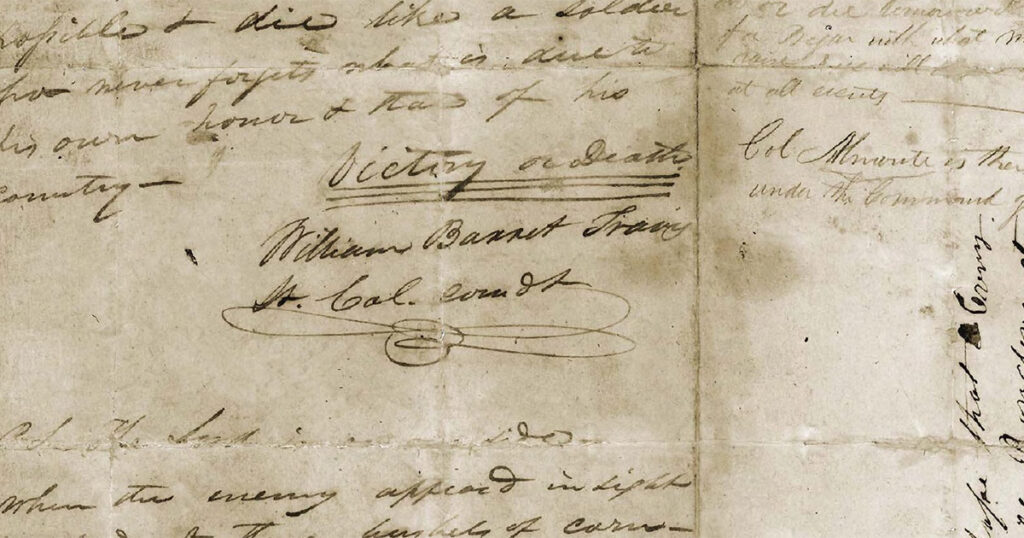 On this day 185 years ago, Lt. Col. William Barret Travis of the Texas Army penned his “Victory or Death” letter from an Alamo under attack. A mere 220 words long, it is almost certainly the single most famous historical document in Texas history—on par with the original Declaration of Independence or the Magna Carta to Texans (read the complete letter in the sidebar, below).

Perhaps no man alive has more thoroughly examined the psyche of Travis than Dr. Stephen L. Hardin, professor of Texas history at McMurry College and author of Texian Iliad: A Military History of the Texas Revolution, and most recently Lust For Glory, an overview of the “Heroic Age” of Texas history that spanned from early Anglo colonization through the Texas Republic.

Key to the letter’s enduring appeal is the quality of the writing, Hardin says. “You have to remember that Travis had been a newspaperman in Alabama, and after that a lawyer, well-versed in filing briefs and arguing cases. So, he was probably far more articulate than your average Texian.”

Hardin recommends reading the letter in the context of the others Travis wrote, pointing out that he and James Bowie, his co-commander at the Alamo, did not expect Santa Anna’s army to reach San Antonio until about March 5. When the Mexican troops showed up two weeks before that, on Feb. 23, it was a major wake-up call.

According to Hardin, a “rattled” Travis “dashed off” a letter that day to the people of Gonzales, effectively the nearest town and the greatest hope for a large number of reinforcements. By mailing it to Gonzales, he also was relying on it being forwarded to the capital at Washington-on-the-Brazos. The letter read simply: “The enemy in large force are in sight. We want men and provisions. Send them to us. We have 150 men and are determined to defend the Alamo to the last. Give us assistance.”

The next day, Feb. 24, Travis marshaled his rhetorical skills and penned the letter that punched his ticket to immortality.

Commandancy of the The Alamo

To the People of Texas & All Americans in the World—

I am besieged, by a thousand or more of the Mexicans under Santa Anna—I have sustained a continual Bombardment & cannonade for 24 hours & have not lost a man—The enemy has demanded a surrender at discretion, otherwise, the garrison are to be put to the sword, if the fort is taken—I have answered the demand with a cannon shot, & our flag still waves proudly from the walls—I shall never surrender or retreat. Then, I call on you in the name of Liberty, of patriotism & everything dear to the American character, to come to our aid, with all dispatch—The enemy is receiving reinforcements daily & will no doubt increase to three or four thousand in four or five days. If this call is neglected, I am determined to sustain myself as long as possible & die like a soldier who never forgets what is due to his own honor & that of his country—Victory or Death.

P.S.  The Lord is on our side—When the enemy appeared in sight we had not three bushels of corn—We have since found in deserted houses 80 or 90 bushels and got into the walls 20 or 30 head of Beeves. Travis

Unlike some who write off Travis as a foolish hothead, Hardin believes he thought he was upholding his part in the grand strategy to defend Texas, and that expecting a large relief force was not out of the question. Little did Travis know that the politicians squabbling in Washington-on-the-Brazos were too distracted with their own infighting to remember that strategy. At one point, the idea had been to prevent Santa Anna from entering the heartland of an Anglo settlement east of the Colorado River. Travis thought the plan was to take the battle to the enemy.

“He was saying that the day we long anticipated and feared is here,” Hardin says, who adds that he believes that thought also applies to a letter Travis wrote on March 3, which was three days before the Alamo fell. Travis was still clinging to the belief that salvation was just over the eastern horizon.

“The Mexicans are here, we can hold his place for a while, but y’all need to send us some help,” Hardin says about this letter. “I think a lot of people get distracted by the grandiloquence and hyperbole, but it’s in the middle section that you have the real importance of the letter.”

Travis was still bargaining in the first of the final three letters, all written on March 3. Addressed to “the president of the convention,” it mentioned that the garrison was well-provisioned but running out of ammo. And then he included a wish list: 500 pounds of cannon gunpowder, 200 cannonballs in an array of sizes, 10 kegs of rifle powder, and a supply of lead. And, oh yeah, enough soldiers to get it to him, and reinforce the garrison.

“This neighborhood will be the great and decisive battleground,” Travis wrote. “The power of Santa Anna is to be met here or in the colonies; we had better meet them here, than to suffer a war of desolation to rage our settlements.”

In a second letter Travis wrote that same day, this one solely to his friend Jesse Grimes, the politician and signer of the Texas Declaration of Independence, he allowed himself to express his pessimism and bitterness: “[I]f my countrymen do not rally to my relief, I am determined to perish in the defense of this place, and my bones shall reproach my country for her neglect.”

And there was one last letter, which Hardin describes as the “most poignant.” It was addressed to his old friend David Ayers, a Methodist missionary and schoolmaster with whom Travis’ son, Charles Edward, was then boarding in Washington County. Travis seemed to have arrived at acceptance of his fate. “Take care of my little boy,” the letter reads. “If the country should be saved, I may make for him a splendid fortune; but if the country be lost and I should perish, he will have nothing but the proud recollection that he is the son of a man who died for his country.”

As a military historian, Hardin loves the letters foremost for their specificity on tactics and such. The highfalutin language impresses him a little less, but without such it might not have gone into history.

To at least one of his friends, the posterity Travis achieved meant more to the 26-year-old Travis than anything he could possibly have done while alive. “He was very ambitious,” wrote his old friend J.M. Kuykendahl years later. “He hungered and thirsted for fame—not the kind of fame which satisfies the ambition of the duelist and desperado, but the exalted fame which crowns the doer of great deeds in a good cause.”

Against long odds he achieved that. He’d failed at journalism, law, and marriage in Alabama, and so came to Texas in the days when nobody came here on a winning streak. He found some degree of success as a lawyer in Anahuac but even more as a rabble-rouser. As a military man, he was definitely out over his skis at the Alamo, but then he called upon his writing and legal skills to pen a letter that chiseled his name in granite over the doorways of schools across Texas and on the map, where counties and lakes bear his name.

The letter still exists in the original. After San Jacinto, the document was handed over to Travis’ estranged widow in Alabama, who passed the letter down to her daughter. Eventually it made its way into the hands of his great-grandson John G. Davidson, who, in 1893, offered it for sale to the state for the princely sum of $250 (about $8,000 today). Lawmakers balked at the hefty price and eventually talked Davidson down to $85 (under $3,000 today).

For decades it was on public display. After 1909, it was set in its forever home, the Texas State Library in Austin, often amid other Texas Revolution-related documents and artifacts. While the now-priceless document is mostly kept in the proverbial “cool, dark place,” it is on view in the A Home for Texas History exhibit at the Lorenzo de Zavala State Archives and Library Building through March 12.

For those who prefer to hear the words spoken, Willie Nelson recited the letter, a fitting tribute from one legend to another.

Editor’s note: An earlier version of this story stated that only a replica of the letter is on display to the public. We have updated the information to include the Home for Texas History exhibit and the ability to see the original letter.