A Place of Refuge

Written by: Dale Weisman
Photos by: Will van Overbeek

Written by Art Williams, Photographs by Will van Overbeek | From the August 2016 issue | Updated: August 1, 2016 | Filed Under: TRAVEL 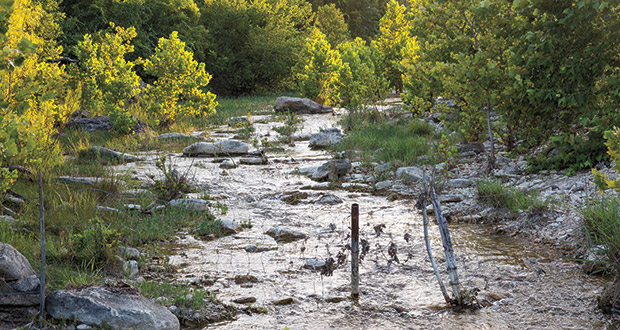 From a limestone precipice at the crest of the Rimrock Trail, I catch my breath and gaze across an unspoiled vestige of the Texas Hill Country. The only sliver of civilization in sight is the ranch road that delivered me to this peaceful refuge. Verdant hills stair-step like balconies above a grassy, oak-dotted valley. When Spanish explorers saw hills like these in the 1750s, they described the terraced terrain as “los balcones,” a region we now call Balcones Canyonlands.

The Friends of Balcones Canyonlands National Wildlife Refuge will host Refuge Week on October 15 with family-oriented activities highlighting the importance of pollinators in the ecosystem.

I’ve come to Balcones Canyonlands National Wildlife Refuge, an hour’s drive northwest of booming downtown Austin and beyond the city’s suburban sprawl, to explore Hill Country hiking trails and find refuge in the fullest sense of the word.

Straddling Travis, Williamson, and Burnet counties and bounded by Lago Vista to the east and Marble Falls to the west, the 25,000-acre patchwork of land is the only wildlife refuge in Central Texas and one of 21 in the state. The U.S. Fish and Wildlife Service established the refuge in 1992 to conserve critical nesting habitat for two endangered migratory songbirds, the golden-cheeked warbler and the black-capped vireo.

“The refuge is important not only for protecting endangered species,” says David Maple, deputy refuge manager, “but also for preserving habitat for other plant and animal species and for aquifer recharge and water quality.”

With its visitor’s center on Ranch-to-Market Road 1431, five miles west of Lago Vista, as well as three other public-access areas, Balcones Canyonlands has a park-like quality that belies its true purpose: habitat preservation. “People sometimes refer to this as a park, but it’s not a park,” Maple explains. “Parks are for people. Refuges are for wildlife.”

Dub Lyon, president of the Friends of the Balcones Canyonlands National Wildlife Refuge, adds, “In wildlife refuges, the plants and animals come first, and people come second. Since we have two endangered birds here, the Endangered Species Act determines how we operate. We have to abide by the rules.” Those rules allow for wildlife observation, photography, environmental education, interpretation (such as youth programs), and hunting (for deer, wild hogs, turkey, and doves).

Balcones Canyonlands is hugely popular with birders, and the National Audubon Society has recognized the refuge as a “Globally Important Bird Area” for its role in protecting golden-cheeked warblers and black-capped vireos. The two songbirds arrive at the refuge in mid- to late-March to mate and build their nests, and then migrate in July and August to Central America and Mexico, respectively.

More than 280 avian species have been recorded in or near the refuge. While some species inhabit the area year-round, others pass through during their migrations. Balcones Canyonlands provides a natural stopping point and breeding ground for neotropical migrants that spend their winters in Latin American countries south of the border.

The refuge’s four public-access areas include more than eight miles of hiking trails. The visitor’s center offers maps and trail guides, as well as an idyllic walk leading to a spring-fed creek, a “pollinator path” for butterfly watchers, and a cave-like photo blind with a water feature to attract songbirds. At the nearby Warbler Vista area along RM 1431, 2.5 miles of trails meander through prime golden-cheeked warbler habitat of oak-juniper woodlands; and a shady trail and graded road lead to the Sunset Deck, a lovely spot for birdwatching and soaking up the last rays of sunlight over Lake Travis.

The Doeskin Ranch Public Use Area, the largest of the public-access units, offers more than five miles of trails, ranging from gentle paths along a purling creek and through prairie and woodland habitat to the more challenging, stair-stepping 2.2-mile Rimrock Trail.

The refuge’s best area to watch for black-capped vireos is the Shin Oak Observation Deck on Ranch Road 1869, nearly nine miles west of Liberty Hill. Scrubby, head-high shin oak surrounds the deck, forming a dense habitat for the nesting vireos each spring. The deck is closed for several weeks in March and April when the vireos arrive from Mexico to breed.

To attract birders and raise funds for the refuge, the refuge’s friends group hosts events throughout the year, including Sparrowfest in February, the Balcones Songbird Festival in April, Swift Fest in August, Refuge Week in October, and an annual Christmas bird count. This year’s Songbird Festival, the refuge’s signature event, drew 300 attendees from 13 states and from as far away as Alaska and Canada. “Birders get so excited over feathers,” says Sharon Macut, chairwoman of the friends group’s songbird festival committee. “They travel hundreds and thousands of miles to see birds out in the field with our accomplished guides.”

Dozens of volunteers donated hundreds of hours to support the Songbird Festival. Such dedicated volunteerism is the lifeblood of the refuge. With a dearth of federal funding in recent years, the refuge relies on its friends group as well the Nature Conservancy, Trust for Public Land, and private donors to help fund ongoing land acquisition, Maple says.

The Balcones Canyonlands National Wildlife Refuge still has a long way to go to reach its federally chartered goal of protecting up to 46,000 acres—or 72 square miles—of endangered songbird habitat. “Right now the refuge is a patchwork of land that looks haphazard on a map, like a puzzle with many missing pieces,” says Maple. “It will take years to build out the habitat in the acquisition area.”

Deborah Holle, who retired as refuge manager in 2015, fears that people will forget about the Hill Country’s natural origins if places like the Balcones Canyonlands are not protected. “They’ll forget about the Comanche Indians, cattle ranching, and how hard life was for early settlers,” she says. “Mostly, they’ll be disappointed we didn’t save more of this beautiful area for wildlife and as a respite to enjoy nature.”

While hiking the Indiangrass Trail through tawny hills on Doeskin Ranch, beyond the reach of cell service and traffic noise, I hope that more of this gorgeous land will be preserved for future generations to appreciate and enjoy. Willa Cather, the great novelist of the late 19th and early 20th centuries, said it best: “The land belongs to the future. … We come and go, but the land is always here. And the people who love it and understand it are the people who own it—for a little while.”