In Rockport-Fulton, Explore the Nature, History, and Culture of Aransas Bay 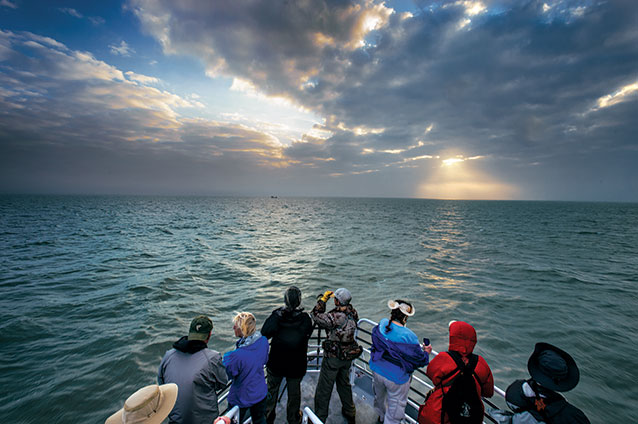 The Native Americans figured it out first, as far as we know.

On the shores of Aransas Bay, the Copanes made the most of coastal resources to support their lives as nomadic hunter-gatherers.

They waded the shallow lagoons, spearing redfish with cedar bows-and-arrows. They scooped up oysters, tossing the shells into middens that grew over decades into mounds 65 yards long. They ventured inland on the coastal prairie, tracking deer and foraging for blackberries and cactus fruit.

To be sure, the Copanes—a band of the Karankawas—led a tough and tenuous existence. But the region provided sustenance enough to support them and their predecessors for thousands of years. Even today, the Coastal Bend’s natural resources and moderate climate remain the primary attraction for visitors to the Rockport-Fulton area. Be it sportfishing, bird-watching, seafood, shopping, the arts, water recreation, or simply relaxing in the shade of wind-sculpted live oaks, life here still revolves around Aransas Bay.

“I like to think of the Copanes as being our original ‘Winter Texans,’” says Captain Jay Tarkington, the skipper of a bird-watching boat tour at Aransas National Wildlife Refuge. “They would spend their winters down here along the shorelines feeding on oysters and finding this relatively easy diet of seafood. And then during the spring and summer months, they’d travel up the rivers and streams and hunt game up there.”

I met Tarkington this January on a three-hour whooping crane tour led by Rockport Birding & Kayak Adventures. On the 40-foot Skimmer sightseeing boat, we departed Fulton Harbor and motored eight miles across Aransas Bay to get a close-up view of the wildlife refuge, the centerpiece of Rockport-Fulton’s ecotourism offerings.

The serious birdwatchers on the boat dizzied themselves spotting dozens of avian species that congregate on the vast, flat saltmarshes to feed on fish, crabs, shrimp, and worms. Majestic great egrets stalked the brackish ponds, bright pink roseate spoonbills shoveled their breakfast, and an imposing osprey perched on an old fence post, holding court over the bay channel. In the gray-green water below, curious bottlenose dolphins surfaced and playfully followed us for a few minutes.

But the whooping cranes stole the show, especially the pair that flew directly over the bow, their seven-foot wingspans on full display a few yards overhead. The Aransas refuge is the winter home of the only remaining wild migratory flock of whooping cranes in the world, an endangered species with a local population of roughly 280. The flock’s numbers had dwindled to about 15 birds in the 1940s, but the refuge—created in 1937 as a haven for migratory birds—provided a patch of safe habitat for the cranes to recover.

During the summer, when the whoopers are at their Canadian breeding grounds, Rockport Birding & Kayak Adventures offers dolphin-watching tours and sunset cruises. There are plenty of birds to see in the summer as well, says Tarkington, who also serves as the aquatic education program director at the Center for Coastal Studies at Texas A&M-Corpus Christi. The tours also provide a thumbnail introduction to Coastal Bend ecology and industry. During our tour, we came across oyster boats circling reefs to collect their daily catch and floated past a massive petrochemical barge on the Gulf Intracoastal Waterway.

“To really take in Rockport and the Coastal Bend area you have got to get out and be immersed in it,” Tarkington says. “It sets the stage for what we’re looking at here ecologically and how unique the area really is.”

Another way to immerse yourself in Aransas Bay is with a swim at Rockport Beach, a park set on a small peninsula next to Rockport Harbor. The beach, a mixture of sand and pebbles, stretches for several hundred yards. Thatch-roof umbrellas on wooden posts offer bits of shade, and a grass lawn provides space for covered picnic tables and a playground. Compared to Gulf beaches, Rockport Beach’s location on the bay makes it relatively shallow and calm—great for little kids.

For many visitors to Rockport-Fulton, the vibrant estuaries of Aransas and neighboring bays are most notable for their prime sportfishing and duck hunting. Sportsmen from Texas and beyond have made Rockport-Fulton a destination since the railroad arrived in 1888. Aransas and San Antonio bays, together covering more than 350 square miles, are famous for their redfish, trout, flounder, and drum. Dozens of guides offer fishing charters, and numerous wooden piers stretch into the bay to provide access for anglers.

Danny Adams Sr., a Rockport sportfishing guide since 1955, has seen the industry grow dramatically since he got his first guiding job at age 15. Adams still guides, and two of his sons and a grandson have followed him into the business. Tourism and activities like sportfishing now drive Rockport’s economy, he says, as the commercial seafood industry has declined due to harvesting restrictions and other factors.

“The ’70s was the biggest era for shrimping. In the ’80s it started declining, and by the ’90s it was virtually non-existent,” says Adams, who owned a seafood distribution business in the 1970s. “But the tourist industry has more than replaced it—way more than replaced it.”

Even if you’re a landlubber, Rockport-Fulton offers a range of activities to keep you busy for a few days. Some visitors find the area inviting enough to stay for longer. During the cold months, “Winter Texans”—generally retirees from northern climes—nearly double Rockport-Fulton’s population of 10,000 residents.

A common starting point for tourists is the Rockport-Fulton Visitor Center, a clearinghouse of information about attractions and activities. A timeline of local history spans a wall of the center and highlights important moments, such as Spanish explorer Alonso Álvarez de Piñeda’s mapping of the Texas coast in 1519, U.S. General Zachary Taylor’s 1845 encampment on Live Oak Peninsula en route to the Mexican War, and the establishment of tourist attractions, such as the Texas Maritime Museum in 1989.

The Maritime Museum sits across the street from the Visitor Center among a cluster of tourist sites adjacent to Rockport Harbor. The museum covers various subjects, including the tale of French explorer La Salle’s ill-fated expedition to Texas—illustrated by a striking five-foot-long wooden scale model of the shipwrecked La Belle and artifacts from the shipwreck, such as knives and axe heads. The museum also delves into other seafaring topics, including navigational devices, boat-building tools, the Texas Navy, and offshore drilling.

“When everybody thinks of Texas, they think of the Alamo and all the inland history and don’t realize what a major role the coast has played in Texas history,” says Phil Barnes, curator of the Texas Maritime Museum. “We want people to get a better idea of what has gone on along this coast, and how valuable it has been.” 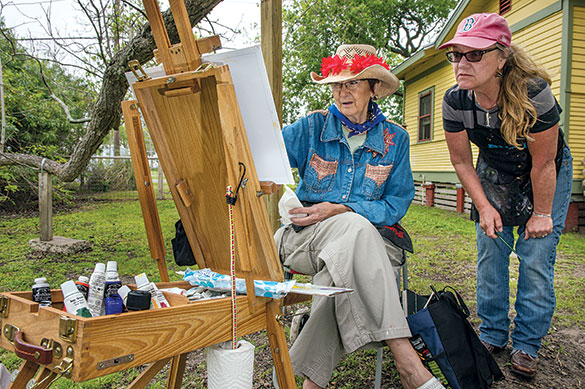 Also at Rockport Harbor, the Rockport Center for the Arts serves as a hub for the local arts community with galleries and a robust lineup of classes, such as color theory and silversmithing. Set in a historic house, the center’s pale blue walls, natural lighting, wooden floors, and colorful paintings exude a coastal vibe of warmth and creativity.

Rockport Harbor also offers opportunities to learn more about local ecology. The Bay Education Center explores the Mission-Aransas Estuary with displays about local habitats such as seagrass meadows, as well as the creatures that thrive in the rich blend of fresh water and seawater, including oysters, blue crabs, and whooping cranes. The center also features a futuristic “Science On a Sphere” exhibit with regular presentations of vivid images projected onto the suspended globe screen. Nearby, the Aquarium at Rockport Harbor houses 24 marine exhibits containing mostly local bay and Gulf aquatic species like shrimp eel and speckled trout.

Ironically, it was turf—not surf—that put the Rockport area on the map in the second half of the 19th Century. The Fulton Mansion State Historic Site recalls the region’s ranching history and tenure as a shipping center. The 1877 mansion is closed for a two-year, $3.4-million restoration project—tentatively scheduled for completion in early 2015—but in the meantime, visitors can peruse the site’s Education and History Center to learn more about the Fultons, who built the mansion among the live oaks overlooking the bay.

In pursuit of distant markets for their beef and cattle byproducts, George Fulton and his associates developed cutting-edge methods of refrigeration for meatpacking and shipping. The meatpacking industry fizzled in the 1880s when the railroad arrived and shippers found it cheaper to move live cattle by rail. However, the infrastructure continued to sustain a profitable but short-lived turtle meat industry, satisfying big-city demand for a delicacy of the time period—sea turtle soup.

“Because the Fultons had lived in the eastern U.S. for a while, they knew about the latest innovations and conveniences you could have in a home, so they built it with three flush toilets, hot and cold running water, central heating, and gas lighting,” says Marsha Hendrix, the site manager. “Both the combination of their personal lives, and the uniqueness of the architecture and the construction, make it significant.”

The Fulton Mansion is worth a stop, despite the restoration project, to see the mansion’s stylish French Second Empire exterior and the verdant grounds shaded by large live oak trees. In fact, the majestic live oaks along this stretch of the Coastal Bend are a worthy attraction in and of themselves. Some are individually famous, such as the gnarly, millennium-old “Big Tree” at Goose Island State Park and the Zachary Taylor Oak, where Taylor camped in 1845. Other stands of wind-sculpted oaks near the shoreline are remarkable for their shape—angled, twisted, and reaching inland from decades of prevailing winds and salt build-up on their seaward edge.

Come evening, after a day of exploring Rockport-Fulton’s coastal scene, a fitting way to reflect on the experience is from the shade of one of these magnificent live oaks. As the bright orange sun sinks into the horizon, a gentle breeze blows ashore, and the aroma of fresh fish smokes from the grill, it’s simple to understand why the Copanes chose this stretch of the Texas coast for their home, and why others have followed them ever since.