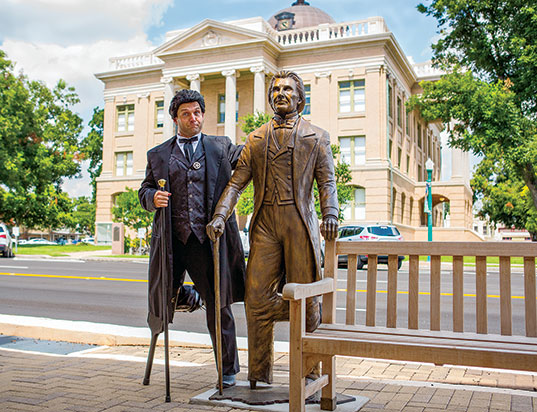 As travelers fly by on I-35, some may be unaware that one simple exit could take them to the heart of Williamson County and what’s known as the “Most Beautiful Town Square in Texas.” Georgetown is a place where the coffee’s fresh, the scenery’s beautiful, and the history is as rich as the enchilada gravy.

I set out on a day trip to explore it all myself.

9:00 a.m. As with all trips, my first mission was coffee! I drove to the town square’s Cianfrani Coffee Company, which roasts its own beans and can turn out dozens of different brews for your sipping (or guzzling) delight. I grabbed a cup and joined everyone from laptop-laden youngsters to paper-rustling retirees as we eased into our day.

10:00 a.m. I was ready to explore the square, which boasts historic buildings filled with everything from dated doilies to cutting-edge cuisine. I channeled my inner child playing with the American and European toys at All Things Kids and then summoned my inner John Wayne at Tribal Impressions, with its aisles of Western and native apparel. A couple of minutes in Ken’z Guitars reminded me that I should never play the ukulele in public, and an hour inside the Georgetown Art Center affirmed that anyone can be an artist—given enough paint.

12:00 p.m. Time for lunch at Roots Bistro, a local sandwich and pizza kitchen boasting live music and Texas craft brews. Unable to decide which pizza to order, I went for the “Kitchen Sink,” topped with everything from Canadian bacon and sausage to spinach and olives. It was a-tasty a-pizza-pie!

1:00 p.m. The bistro’s name made me ponder Georgetown’s “roots,” so I headed to The Williamson Museum. Located in an old bank building, the mu-seum tells the story of Williamson County, named for Robert McAlpin Williamson, a Texas Revolution fighter and founder of the Texas Rangers. Williamson, who never actually lived in the county, was also known as “Three Legged Willie,” because he walked on a wooden leg with his real leg drawn back at the knee (a result of a crippling childhood illness). He’s just one of the many characters from Georgetown’s storied past.

1:30 p.m. For more history, I crossed the street to the historic Williamson County Courthouse. On a guided tour, I learned about Dan Moody, the young prosecutor who made history in 1923 by taking on Ku Klux Klan members and winning. It was the first time Klan members were successfully prosecuted and sentenced to jail in the South. The courtroom is so well preserved that you can almost hear the gavel pounding, serving up Texas-style justice.

2:30 p.m. For some natural history, I descended into Inner Space Caverns, considered one of the best caves in Texas. The guide took us past fossils, jagged formations, and underground pools. I learned a lot, but the difference between stalactites and stalagmites still eludes me. Good thing there wasn’t a quiz.

4:30 p.m. I emerged from the cave’s coolness into the blazing sun and headed to Blue Hole, a local scenic swimming spot along the San Gabriel River. As I floated below the towering limestone cliffs, I gained a renewed appreciation for the amazing beauty of Texas.

6:00 p.m. The day was winding down, but the Texas sun didn’t seem to care. For my final stab at beating the heat, I walked downriver for an ice-cold margarita at El Monumento. The stately hacienda-style courtyard accentuated the scratch-made Mexican fare. I sat on the terrace overlooking the river and practically licked my plate of beef short rib enchiladas clean.

While the square is certainly a beautiful part of the city, it holds only a fraction of the attractions in Georgetown, which is ready and ripe for your daytrippin’ pleasure. So whether you follow my footsteps or forge your own path, I hope to see you on the road.