Paint the Town in Schulenburg 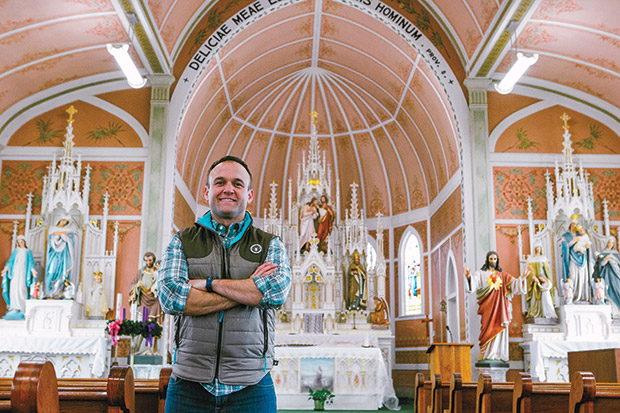 In the 1800s, European settlers flocked to Texas, with many Germans and Czechs putting down roots in the vast expanse between Houston and San Antonio. They brought their families, their traditions, and their food, setting modern trippers up for a Texas-size European vacation.

For information on the town and tours of the Painted Churches (guided and self-guided), contact The Greater Schulenburg Chamber of Commerce, 979/743-4514.

7:30 a.m.: I started my day by indulging in the Czech breakfast of champions: kolaches. While Texans ascribe the name to both the fruit and meat variety of this bready pastry, I’m drawn to the buttery goodness of traditional fruit kolaches, which I found at the Original Kountry Bakery. The first two melted in my mouth so quickly that I had to grab a few more to go.

8:30 a.m.: As I cruised the countryside, I followed the steeple on the horizon to St. Mary Catholic Church in High Hill, one of the area’s famed “Painted Churches.” While the brick facade may seem typical for a country church, inside lies a sanctuary full of ornate sculptures, stained glass, and paintings that rival those in the cathedrals of Europe. In total there are more than a half-dozen of these painted churches, including the two others I visited: Sts. Cyril and Methodius Catholic Church in Dubina and St. John the Baptist Catholic Church in Ammannsville (pictured above), known as “The Pink One.” It’s not surprising that the Czechs and Germans brought their religious traditions to Texas, but it is surprising that they were able to construct such magnificent churches on the Texas frontier.

12:00 p.m.: Ready for a tradition that
feeds both the body and soul, I drove to Sengelmann Hall. Originally opened in 1894, the nostalgic spot features a big wooden bar and long family-style tables. Live music is a popular draw here, and the food is better than ever thanks to Momma’s at Sengelmann’s, which serves up homemade pizza, burgers, and a pork schnitzel that will make your eyes roll back in your head. I ordered mine with a big German beer and toasted “Prost” to lunch.

1:00 p.m.: To put some oompah in my day, I walked to the Texas Polka Music Museum, which honors the many artists who have brought polka power to Texas. There were old records, instruments, and even some DJ equipment from a local all-polka radio station. I was so inspired that I bought a polka CD to enjoy some road-trip tunes on the way home.

2:30 p.m.: Next stop: the Stanzel Model Aircraft Museum, dedicated to the local brothers who pioneered miniature aviation. Their most well-known plane, the “Tiger Shark,” was the first control-line model kit in the world. The well-designed complex was packed with drawings, old machines, and the stories of how Victor and Joe Stanzel founded one of the most-loved model plane companies in America.

4:30 p.m.: With a giant squirrel sign outside shouting “How ’Bout Them Nuts,” I had no choice but to stop at the Potter Country Store, offering local pecans in every form and flavor, including raw, roasted, chocolate-covered, and stuffed in pies. They even had a warm cinnamon variety ready for “grab and go” consumption.

6:00 p.m.: I saved just enough room for dinner at The Garden Co. Marketplace and Cafe. As the new restaurant in this
old town, this spot squeezes a full-service nursery, a home and clothing shop, and a quaint cafe into one location. I wasn’t sure whether to shop, eat, or re-landscape my flowerbeds. I decided on food first and devoured an entrée of seared duck topped with fruit chutney and served with vanilla-sage sweet potatoes—a delicious departure from standard country cooking.

In German, “Schulenburg” means “school town,” and I certainly learned a lot about the German-Czech-Texan culture here. The town honors its history and transforms it into a brand new adventure. So whether you follow my footsteps or forge your own path, I hope to see you on the road.