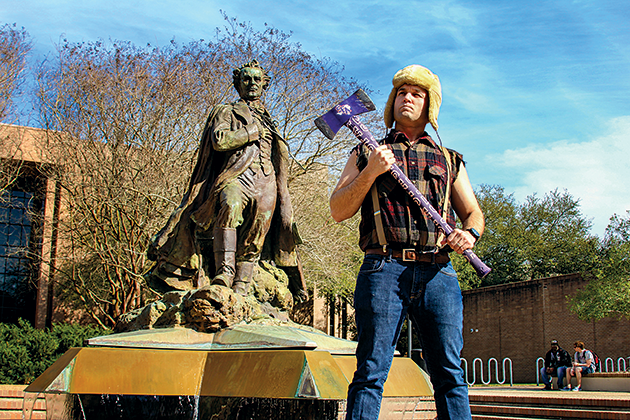 Texas history runs deep, so to be the “oldest” anything in the state is a rather special feat. This notion is what inspired me to travel deep into the heart of the Piney Woods to the town of Nacogdoches, curious to see what adventure I could find in the “oldest town in Texas.”

9:00 a.m.  I immediately found more than just stale history on the campus of Stephen F. Austin State University, named for the “Father of Texas,” who visited Nacogdoches periodically. I was so impressed with the towering pines and friendly “Lumberjack” students that it wasn’t long before I ripped off my sleeves, grabbed a flappy hat, and started chanting “Axe ’em, Jacks” at the top of my lungs.

9:30 a.m.  While on campus, I visited the Stone Fort Museum, a replica of Nacogdoches founder Antonio Gil Y’Barbo’s stone house, which functioned as everything from a trading post to a jail to a saloon along the El Camino Real trade route. Today, it’s a reminder of the town’s rugged roots and humble beginning.

10:00 a.m.  I headed to the Nacogdoches Visitor Center and learned how Y’Barbo, a Spaniard, established Nacogdoches in 1779 as the first real pueblo (town) in Texas. I was surprised to learn about the nine flags that have flown over Nacogdoches, as opposed to the traditional six flags of Texas. While downtown, I walked the red-brick streets and grabbed a cup of coffee and a muffin from the Old Towne General Store.

10:45 a.m.  I found historic treasures all over town, including the remnants of ancient burial mounds on Mound St., the Old University Building dating to 1859, and the immaculate works of master architect Diedrich Rulfs. I then toured the Sterne-Hoya House Museum and Library, a dogtrot house built in the 1830s by German immigrant Adolphus Sterne, a financier of the Texas Revolution. In the early days of Texas, a number of notables passed through Nacogdoches, and many stayed in this home, including Davy Crockett on his way to the Alamo, and Sam Houston, who was baptized here.

12:00 p.m.  I was ready to partake in some old-fashioned eatin’ and headed to CC’s Smokehouse. This steak and barbecue joint was packed with everyone from lawyers to oil-field workers and even the local police force. I ordered a 20-ounce “Cowboy Steak” cut thinner than a pancake and cooked to perfection on the flat-top grill. The delicious final product covered my entire cafeteria tray.

1:00 p.m.  Ready for some hands-on history, I drove to Millard’s Crossing Historic Village, which allows visitors to partake in demonstrations of everyday pioneer life. I shelled some corn, scrubbed some laundry, and even tried writing with a quilled pen. It was a blast, but made me extra-thankful for modern technology.

4:00 p.m.  Experiencing pioneer life was fun, but Nacogdoches’ modern options for entertainment are much more thrilling, especially at Zip Nac, which features six high-flying zip lines. Each line had me screaming, both in speed and sound, as I flew 50 feet above the forest floor. As beautiful as the trees are from the ground, they’re even more beautiful at canopy level.

6:00 p.m.  Ready to cap off the day, I headed to Hotel Fredonia, which was built by the community in 1955 and retains its vintage character. One step into the lobby, and I could hear Frank Sinatra and Dean Martin singing in my ear. I found a table at J. McKinney’s Restaurant, overlooking the hotel pool, and then settled in behind a plate of “Jack’s Shrimp and Grits” with spicy grilled shrimp atop a delectable pile
of cheddar-jalapeño grits.

Nacogdoches may harbor more than 200 years of history; however, it’s anything but outdated. And it doesn’t matter if you visit its youthful Lumberjacks or historic pioneers, you’re guaranteed rich experiences in Texas’ “oldest” town. So, whether you follow my footsteps or forge your own path, I hope to see you on the road.