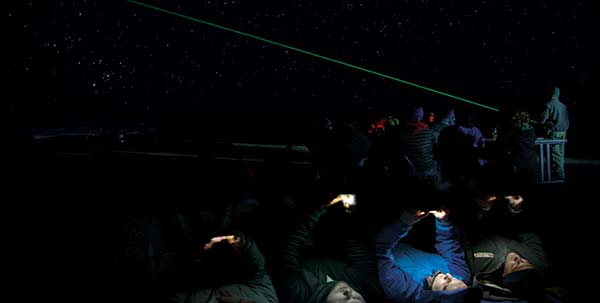 A wide asphalt airstrip stretches 5,500 feet into the desert landscape toward a row of hills in the distance. I spread out a thick blanket and lie back for an unobstructed view of the sky in all directions. Not a single manmade structure or light source mars the darkness, only a mesmerizing number of twinkling stars.

This airstrip is deep inside Big Bend Ranch State Park, about a mile from the Sauceda Headquarters Visitor Center, which is about 27 bumpy miles down an unpaved road that leaves Farm-to-Market Road 170 four miles outside of the border town of Presidio. I’m stargazing at the Big Starry Night Star Party at Big Bend Ranch State Park, an event the park organizes at least six times a year, always on the new moon.

Big Bend Ranch State Park sprawls across nearly 500 square miles along the Rio Grande west of Big Bend National Park, taking in rugged mountain ranges, deep canyons, springs shaded by green cottonwoods, and endless vistas of creosote, ocotillo, cacti, and lechuguilla. More than 70 miles of unpaved road and 238 miles of trails stretch deep into the park’s wilderness, but much of the landscape lies beyond the reach of any but the hardiest of hikers, bikers, and equestrians.

The stars, by comparison, are easily accessible. Simply look up anywhere in the park after dark and the Milky Way arcs from one horizon to another like an exuberant brush of sparkling paint across a black canvas. Add a set of binoculars and each pinpoint of starlight becomes multiple celestial bodies. Gaze at a spot in the sky long enough and a shooting star or satellite is bound to streak past.

Rangers who’ve received training at the nearby McDonald Observatory lead the star parties. The rangers set up a couple of telescopes and provide binoculars for peering at the sky. Parties start with basics like finding the North Star and include a tour of the constellations, easily visible in these dark skies. With my own basic binoculars, I am able to view star groups in some of the constellations, the Milky Way, and Andromeda galaxy. The latter, a fuzzy smudge to the naked eye, becomes an entire galaxy when viewed through one of the telescopes.

Far West Texas is also home to popular star parties put on by astronomers at the McDonald Observatory, a world-class research facility operated in the Davis Mountains by the University of Texas. The observatory star parties feature more and bigger telescopes, but also bigger crowds. It’s not unusual for observatory star parties to host crowds of several hundred people, while at the state park, you may bump into 30 people at the most.

So dark are the skies over Big Bend Ranch State Park that the park is in the process of obtaining official designation as a Dark Sky Park from the International Dark Sky Association. So far in Texas, the association has bestowed the designation only on Copper Breaks State Park, Enchanted Rock State Natural Area, and Big Bend National Park.

“We are blessed with a really dark sky,” says Barrett Durst, superintendent of Big Bend Ranch State Park. “It’s one of our precious natural resources.”

Describing itself as “the other side of nowhere,” Big Bend Ranch State Park sees only about 6,000 visitors per year. Given its isolation and the unpaved road between the Sauceda Headquarters and FM 170 (the drive to Presidio takes about one-and-a-half hours), the park encourages Star Party participants to stay overnight. The Sauceda Headquarters offers lodging in a ranch house and a former hunting lodge bunkhouse, as well as tent camping.

There’s plenty to keep you busy during the day as well. Trails explore springs and tinajas (rock holes that sometimes hold water), canyon rims, and waterfalls. Birds can be found throughout the park, most common among them scaled quail, black-throated sparrows, and roadrunners. Park rangers offer free one- to three-hour guided interpretive hiking tours featuring plants and animals, archeology, history, and geology. Longer tours in four-wheel-drive vehicles cost $150 (for up to six people) and focus on the topics of geology, archeology, and nature.

I took advantage of as much as I could of this rugged, wild, and truly enormous park during the daylight. But when the sun went down, I was happy to park myself on that blanket and let the universe entertain me. That’s something you can’t do just anywhere.