An urban fusion of history and culture in far west Texas 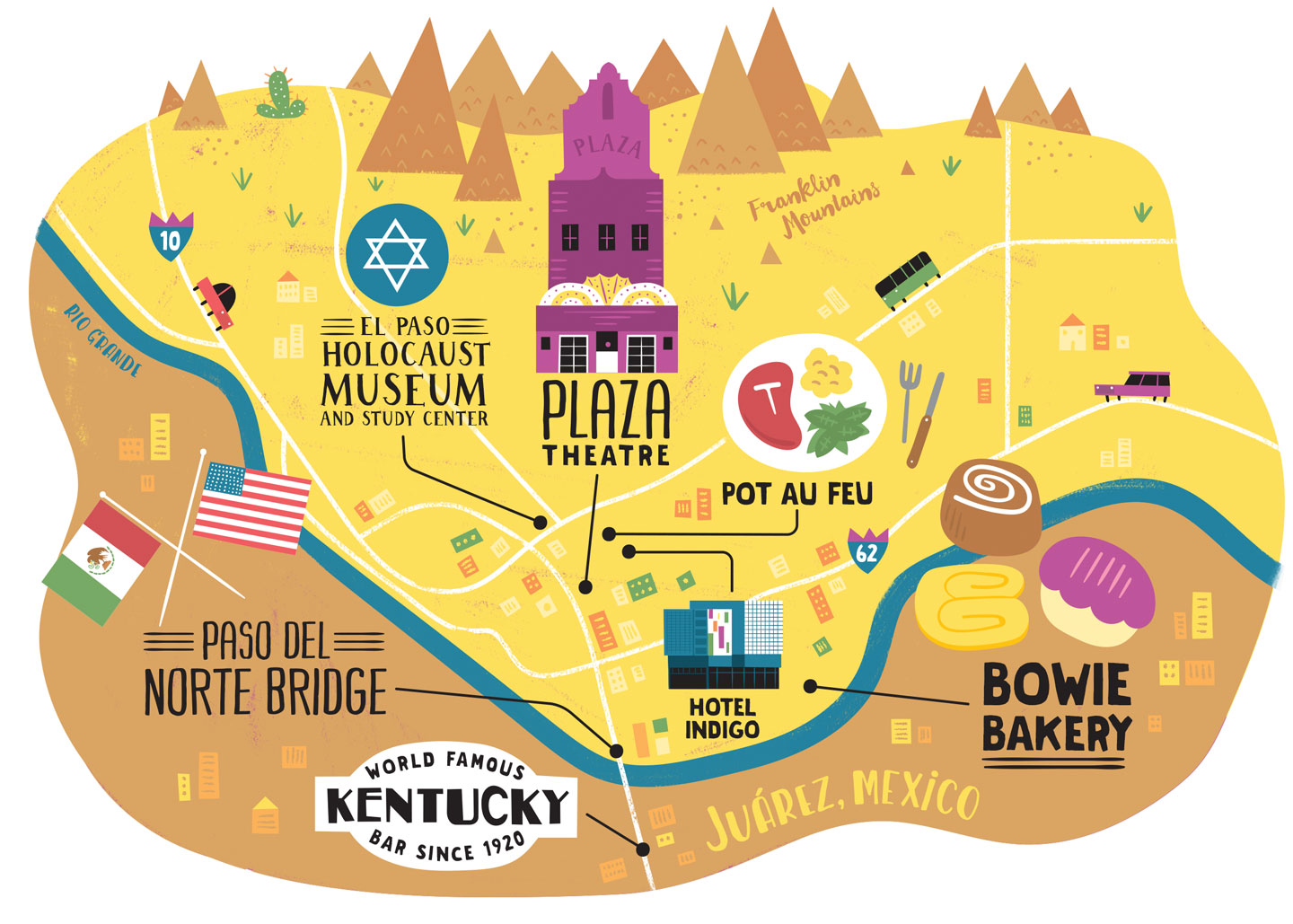 Way out at the western tip of Texas—more than 500 miles from any other major Texas city—percolates El Paso, the northern side of one of the world’s biggest border communities. 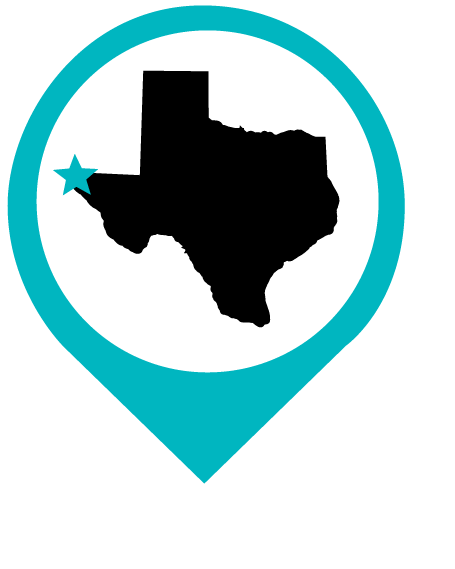 Originally named El Paso del Norte for its location at a break in the Franklin Mountains, the area was a rest stop for explorers— passing through on their quests for riches—as far back as the 1500s.

But don’t let the name fool you; present-day El Paso is much more than a pass-through. This city of almost 700,000 people has a deeply established culture that, thanks to the twin forces of geographic isolation and proximity to Mexico, is distinctly its own. Walking the streets of its history-steeped downtown, the words “only in El Paso” may cross your mind more than once.

Perhaps no building typifies the fertile layers of El Paso’s history better than the Plaza Theatre, a Spanish colonial treasure built in 1930 that once again anchors the arts in the city. In the heart of downtown, the narrow façade and marquee belie the grandeur and spaciousness within. Occupying the land of El Paso founder Juan María Ponce de León’s 1832 ranchito, the 2,049-seat theater was the most popular movie house in El Paso for decades. Sinking back in its red velvet chairs, you can imagine Mae West and John Wayne on-screen and the theater’s original 1930 Wurlitzer organ humming away. 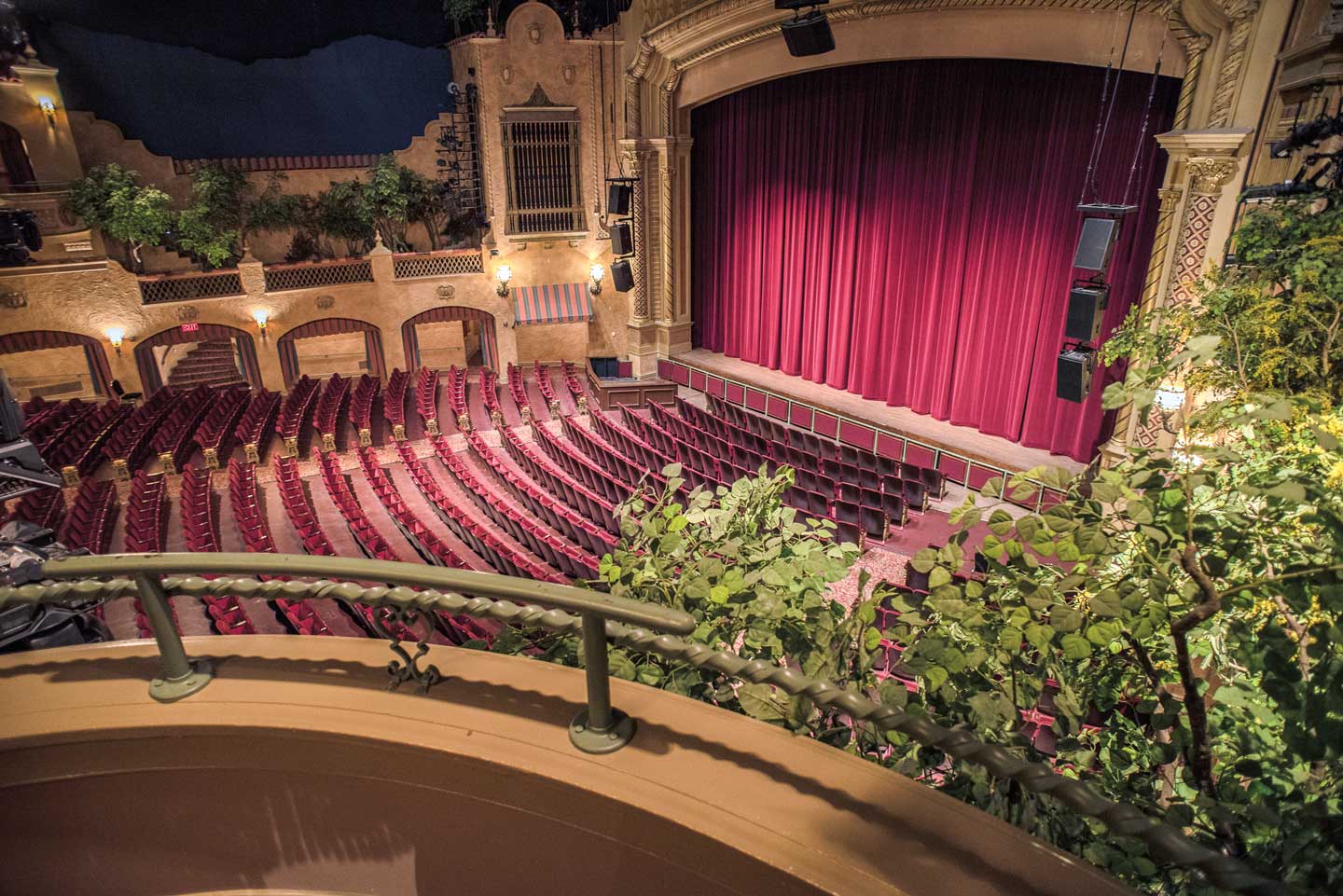 The theater’s devotees—spearheaded by the El Paso Community Foundation—managed to save it from the wrecking ball when it was slated for demolition in the 1980s. After years of meticulous renovation and technological upgrades, the theater opened again in 2006, and now its contribution to the life of El Paso is immeasurable. The Plaza stages Broadway musicals, symphony and opera performances, major national acts like Tom Waits and Morrissey, and what may be—with more than 40,000 attendees—the largest classic film series in the world (founded in 2008, the annual Plaza Classic Film Festival will show nearly 100 films over the course of 11 days this August). In a 2014 article, Rolling Stone named the Plaza the most important music stop for bands to make in Texas, and its success has inspired additional renovation projects downtown.

“The re-opening of this theater was a spark for the whole downtown,” says Gary Williams of the El Paso Community Foundation. “People saw what could be done, and now more downtown revitalization is happening. The beauty, too, is that this theater connects generations—people whose parents and great-grandparents came here and fell in love and have these memories. Now their children get to experience it, too. That’s rare, but this generational connectedness is vital in El Paso.”

The value of generational connection is particularly alive in El Segundo Barrio and Chihuahuita, two of the city’s historic Hispanic neighborhoods just a short walk south of the Plaza Theatre. Nestled in a curve of the Rio Grande, they serve as repositories of El Paso culture and its storied history with Juárez across the border. If not for the plaque out front, for example, you might miss the handsome yellow-brick El Paso Laundry and Cleaners Co. building. Here since 1897, the building marks the spot where, in 1909, Mexican President Porfirio Díaz received a 21-gun salute on his way to meet with U.S. President William Howard Taft at the former chamber of commerce building. Two years later, during the Mexican Revolution, El Pasoans reportedly flocked to the roof of the Laundry to watch the Battle of Ciudad Juárez on May 10, 1911.

“The beauty is that this theater connects generations—people whose parents and great-grandparents came here. Now their children get to experience it, too.”

Only in El Paso. This is a place where gunslingers and rebels like John Wesley Hardin and Pancho Villa walked the streets; where presidents from both sides of the borders (JFK, LBJ, Porfirio Díaz) came to enhance relations between the United States and Mexico; where colorful murals of beloved local heroes like the bicycling priest Father Harold Rahm brighten the walls of vibrant Hispanic neighborhoods. 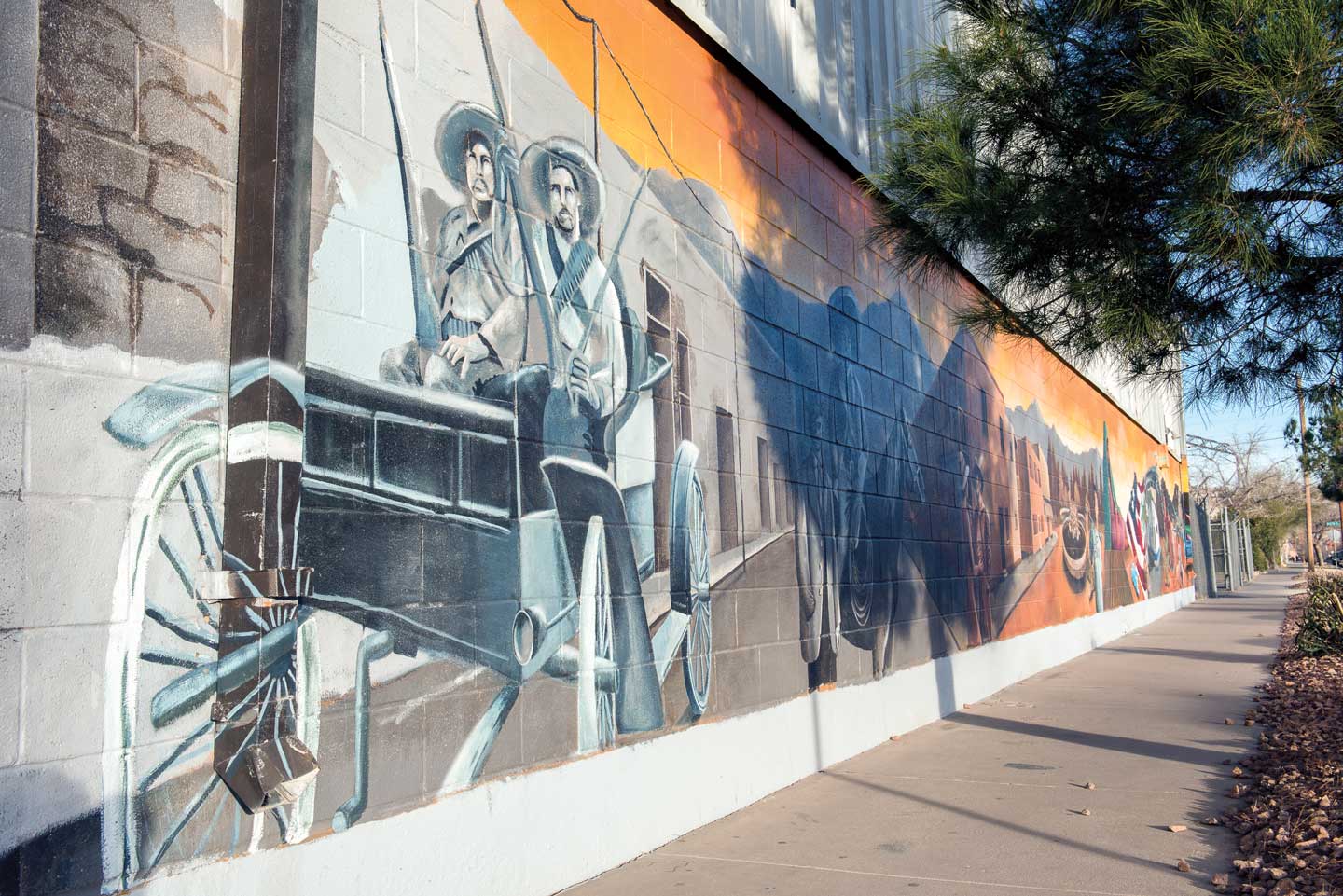 It is also an ideal place to find some top-notch pan dulce. Even before you arrive at the steps of the Bowie Bakery, a baked-goods institution since 1951, you can smell the sweetness. There’s almost always a short line, but that gives you time to make your selection from the bounty of colorful pastries and check out the laminated newspaper article about President George W. Bush’s empanada-eating excursion here in 2001. After a long walk through colorful streets of flat-roofed homes in this quiet neighborhood, I’m eager to sink my teeth into a concha, a powdery sugar-dusted semicircle of bread.

Fueled with a pan dulce sugar boost, I head off for a different taste of the culture and contrast of this city: the Holocaust Museum and Study Center. This small center on the edge of downtown is the only Holocaust museum within a 700-mile radius and the sole Spanish-English Holocaust museum in the world. El Paso businessman Henry Kellen, a leader in the small but influential Jewish community here, founded this museum in 1984; he aspired to transform his family’s painful Holocaust experience into a tool for educating others. Kellen, who went into hiding at a Lithuanian farm with his wife and nephew to evade the Nazis, lost his parents and siblings during the occupation. Standing in the museum’s dark rooms with a close-up view of gas chamber showerheads that Kellen collected during return trips to Europe, the brutality of the Third Reich hits you in the gut. The exhibitions create a powerful thread between this intimate educational space in the Texas desert to the tragedies of Europe in the 1940s.

Standing in front of a display on the rise of Nazism, one visitor, a little boy about 7 years old, points to a swastika and asks his mother, “Mamá, que es éste?” (Mom, what is this?) The mother explains, using the museum’s bilingual placards for help. I imagine that Kellen, who passed away in 2014, would appreciate how the vision for his museum is playing out in these exchanges every day.

After this moving visit, it’s a strange feeling to step back out of the museum into a bright spring afternoon in the Chihuahuan Desert. Again, El Paso surprises—cultures and histories mingle and inform each other in a manner unlike any other city in Texas. 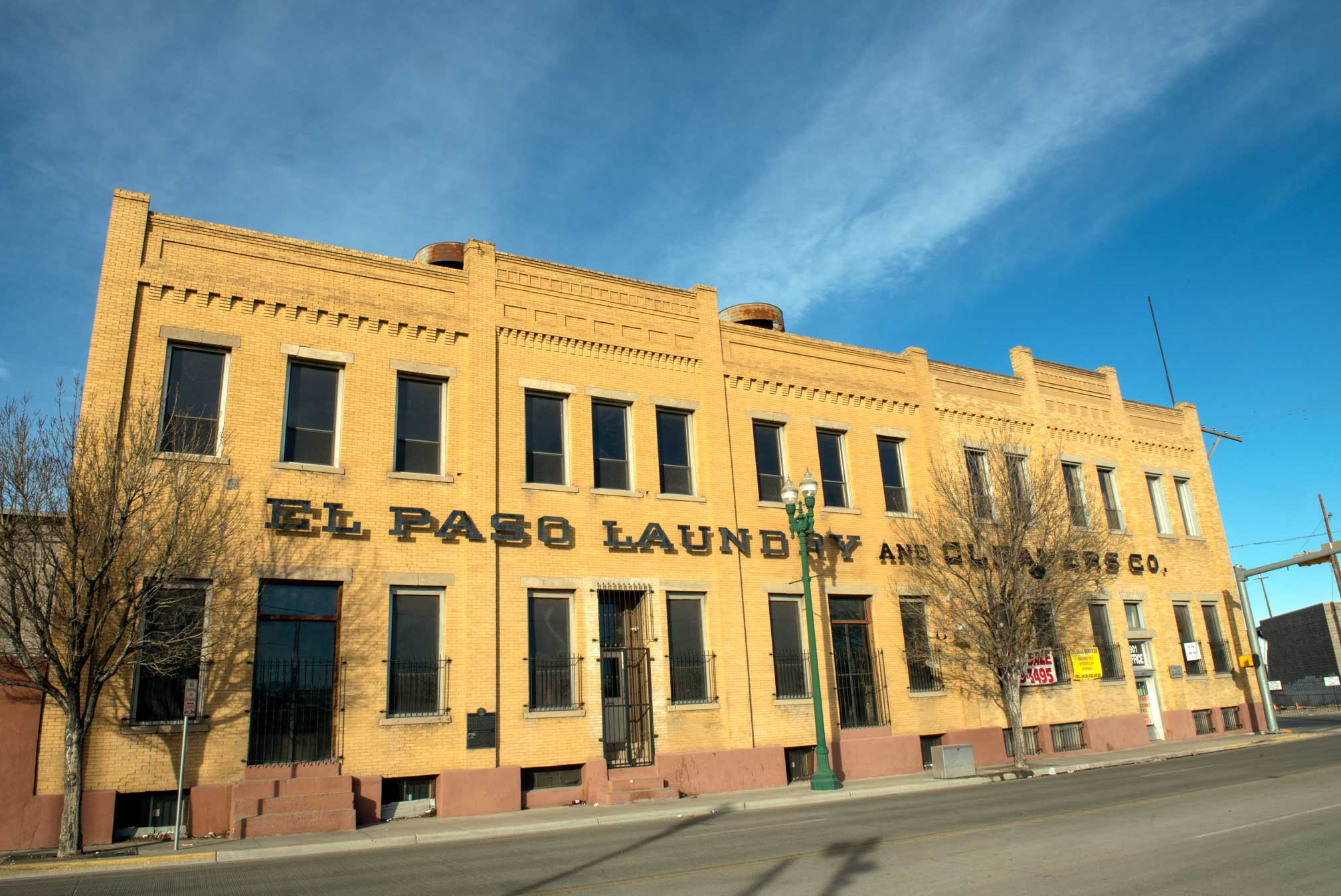 During the Mexican Revolution, locals reportedly watched the Battle of Ciudad Juárez from atop El Paso Laundry and Cleaners Co.

Perhaps nothing communicates the cultural commingling of El Paso like a visit to the main drag in Juárez, a busy section of the Mexican city that the El Paso tourism office once again promotes. From El Paso’s hip and colorful Hotel Indigo—the snazziest place to stay downtown—it’s an easy walk down bustling South El Paso Street to the pedestrian path on the west side of the Paso del Norte Bridge, approximately where Porfirio Díaz and Pancho Villa crossed over more than 100 years ago. “Despite all the negative perception, Juárez is a city worth exploring,” says Maegan Hruby, tourism marketing manager for Destination El Paso. “Walking across the bridge really makes the experience that much better.” I put two quarters in the rotating gate, walk over the Rio Grande, and in a few minutes set foot on boisterous Avenida Benito Juárez, where vendors with fruit, crafts, and other goodies hawk their wares. Don’t forget your passport. 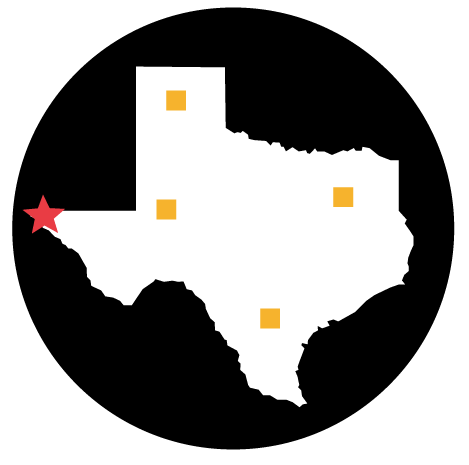 In Juárez, I make a beeline for the Kentucky Club, the Prohibition-era saloon where Western stars like Steve McQueen and John Wayne knocked one back between film shoots. The Kentucky Club claims to have invented the margarita—one of many contenders for that honor, the veracity of which is not for me to contest. But nonetheless I was eager to taste one. The security guard out front gives me the once-over to make sure I’m not bringing anything suspicious in, which is comforting, and voilà, I am now sitting at the legendary Encino oak bar, ordering one of these famous margaritas.

Sergio, the current owner, who lives in El Paso, checks in on me just as my margarita arrives. “Make sure your first sip is from the rim, not the straw, so you get the full taste of the salt,” he urges. As I savor the balance of salt, fresh lime, tequila, and Controy (a Mexican orange liqueur), Sergio points to my feet, which are resting on a tile trough on the floor. “See where your shoes are? That’s a floor urinal, so men didn’t have to leave the bar. Al Capone once peed there. Don’t worry, no one’s used it for years.”

Back in downtown El Paso by dark, I stop off at Pot au Feu, an understated French bistro with large murals of Paris on the wall. It’s an ideal spot to linger at the bar and talk to the chef and owner, the Le Cordon Bleu-trained Roberto Espinoza. Espinoza knows a lot of historical trivia about downtown El Paso. He points out the newly laid streetcar tracks just outside on Franklin Avenue; by the end of the year, El Paso’s vintage streetcars should be chugging again after a 34-year hiatus. Dating to 1882 when they were pulled by mules, the streetcars used to ferry El Pasoans over to Juárez and back for lunch or to see family.

Suddenly, a group of about eight people, from grandparents to toddlers, are gathering at the restaurant door, hugging and speaking a mix of Spanish and English as they make their way to a big corner table. Espinoza tells me they’re regulars, a family in which some live here and some in Juárez. “For many El Pasoans, there’s really no separation; it’s one big community,” he tells me as he makes his way to greet them.

Only in El Paso, I think, as I consider just how much one day in downtown El Paso del Norte can offer. No matter where you live, this urban fusion of culture and history is well worth the drive.