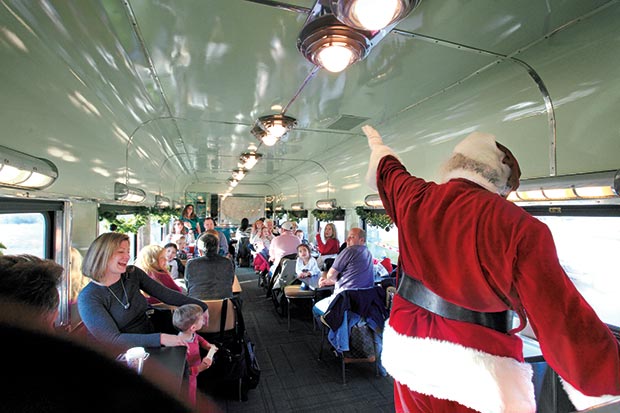 Holiday-themed festivities on board the North Pole Flyer include visits from Santa and Mrs. Claus, Christmas carols, and unlimited hot chocolate.

1. The popular North Pole Express in Grapevine includes a “We Believe” silver Santa bell (if you’ve watched The Polar Express, you’ll know why the bell is a big deal), a mug of frosty chocolate snow milk, and a family photo with Santa.

2. The Texas State Railroad, out of Palestine, also offers a Polar Express train trip, complete with soundtrack. Guests enjoy Christmas-decorated steam-powered rail cars, and cookies and cocoa delivered by dancing chefs. The train stops at the “North Pole” to let Santa on board, and he hands out sleigh bells to the children.

3. At the Christmas Train at Victory Camp in Alvin, the eight-to 12-minute train ride around the grounds is just part of the holiday festivities. Attendees will be dazzled by more than 300,000 lights and hundreds of Christmas decorations such as a gingerbread village, penguin snow lands, and life-size storybook illustrations within the park. Guests can also enjoy story time with Mrs. Claus and live music, as well as hot cocoa, popcorn, and pizza for purchase. The event runs on select days in December.

“Are we really going to the North Pole, Mommy?”

My 7-year-old son August, still young enough to revel in the magic of Christmas yet inching bit by bit toward skepticism, asks me this question every few minutes as we prepare to board the North Pole Flyer with his dad and 2-year-old brother, Crosby. August’s wearing his new plaid Christmas pajamas (children are encouraged to wear PJs on board) that say “Santa’s Favorite” on the pocket.

The Austin Steam Train Association operates the special holiday-themed trip each November and December. This year marks its 10th year of welcoming families on board for a little hot chocolate and Christmas magic.

The two-and-a-half hour train route runs from Cedar Park to Bertram and back again, with no stops. Along the way, holiday characters including Mrs. Claus, a storytelling elf, and Santa Claus himself greet passengers.

As we settle into our private compartment in the 1949 Rippling Stream car, a volunteer staff member brings us cups of hot cocoa on a tray. The temperature has dipped into the 30s today, so the hot chocolate is especially welcome. Candy canes decorate our compartment’s table, and the boys rip into them eagerly.

If you’ve never been on the train, the beautifully restored vintage cars are a treat in their own right. Polished chrome accents, vinyl seats, and retro light fixtures harken back to the days when train travel was the gold standard for getting across the country. Back then, sleeping compartments—with fold-down beds and adjustable heating and cooling—also included the service of a porter, who delivered food and drinks and even shined your shoes.

Though Austin was a smaller train hub than Houston, Fort Worth, or San Antonio, about a dozen passenger trains stopped through Austin daily in the 1920s, according to Ben Sargent, chair of the Austin Steam Train Association board and a volunteer train conductor.

As we travel, August peers out at the landscape, searching for the signs of snow that he imagines would herald our arrival at the North Pole.

When the final moment arrives and the big guy himself enters the train car, a hush momentarily falls over the kids.

Crosby, for his part, is delighted at the idea of being on a real-life “Thomas the Tank Engine” and merrily sings the Thomas theme song, as well as his own version of “Jingle Bells,” which sounds like, “Bingle-bells HEY!” over and over again. Mrs. Claus comes around with a basket of cookies and asks the boys what’s on their Christmas lists. August, typically very vocal about his latest Transformers obsession, gets a bit shy when meeting this particular celebrity. “You’d better write down your list so you can give it to Santa!” she tells him, so he quickly gets to work.

In the dining part of our car, another volunteer leads the group in a round of “Rudolph the Red-Nosed Reindeer” and “Frosty the Snowman.” The unlimited hot cocoa flows. Other beverages—iced tea, apple juice, and water—can be purchased before you board the train.

Next, an elf joins the group and tells a story written just for this particular train. She encourages the children to join in, making train noises and saying, “Ho! Ho! Ho!” when Santa joins the story. 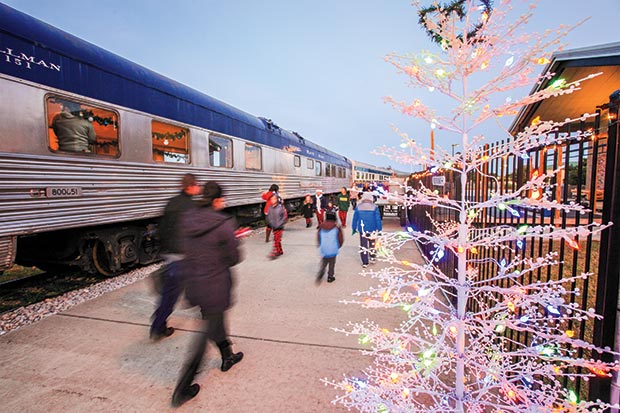 “One thing about our organization is not only are we operated by a nonprofit organization, but everybody operating the train is a volunteer, from the mechanical staff out there in the yard to all the people on the train,” Sargent says. “They do it because they love it—they love railroading and also interacting with the public.”

When the final moment arrives and the big guy himself enters the train car, a hush momentarily falls over the kids. One by one, they line up to sit on his lap. August hands him his list, which is scrawled with the names of a few Transformers, a dog, and a “samurai suit that flies,” and smiles for a quick photo. When a helper gives both boys a small toy as a gift, August’s whole body shakes with excitement.

In the holiday movie The Polar Express, the conductor says, “The thing about trains, it doesn’t matter where they’re going. What matters is deciding to get on.”

I am reminded of that as I watch my boys’ eyes light up during their special journey to meet Santa and realize that “the North Pole” is perhaps not so far away after all.