Yes, You Can Tour a Texas Castle

Written by Art Williams, Photographs by Will van Overbeek | From the July 2017 issue | Updated: July 25, 2019 | Filed Under: Eat + DrinkFamily Travel 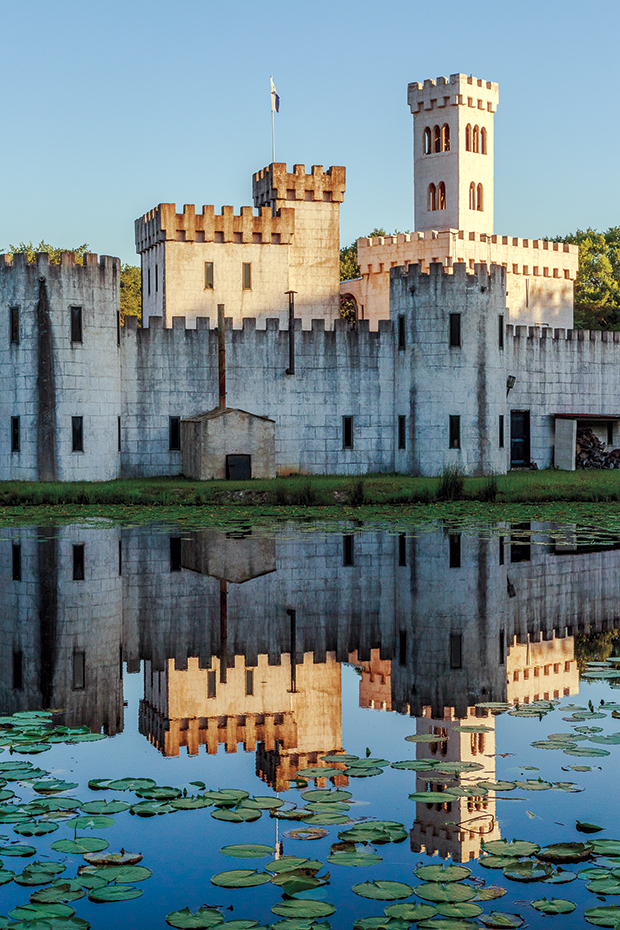 Yes, it’s true: You can tour a medieval-style castle in Central Texas, complete with a moat, drawbridge, and corner turrets.

Something amazing, and in fact, quite regal is hidden in Bellville, a tiny town roughly halfway between Austin and Houston. Though primarily known as the seat of Austin County, this not-so-sleepy small town (pop. 4,000) has recently distinguished itself for more than its governmental function.

Longtime resident Michael Newman could have gone down in history as the owner of Bellville’s much-loved Newman’s Bakery, which for 34 years has drawn a loyal patronage for breakfast specials like made-from-scratch donuts, sugar-dusted French toast, and over-easy eggs paired with buttery house-made croissants. But these days, visitors stop by the bakery for more than pastries and breakfast; it’s the first stop on a tour of a whimsical edifice outside of town known as Newman’s Castle, a full-scale replica of a medieval castle replete with five corner turrets, a 3,000-pound drawbridge, moat, and trebuchet. 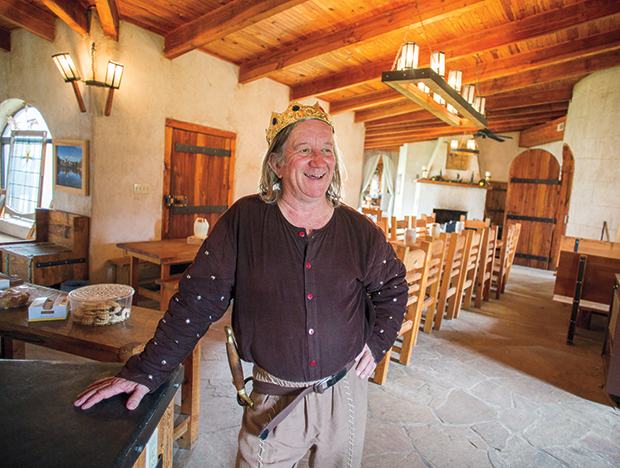 Michael Newman built his Texas castle after gaining success in the area with Newman’s Bakery, whose pastries have royally devoted fans.

A fifth-generation Texan, Newman had spent time abroad, where he admired the palatial residences inhabited by the European elite. In 1997, with the bakery business going strong, he surveyed the land he owned just outside of Bellville and decided to make his dream of living in royal style a reality. Over the course of the next decade, Newman constructed his own personal feudal fortress brick by brick, gradually expanding the base structure to include a banquet hall, chapel, dungeon, and guest quarters, in addition to his own personal living spaces.

Visitors often comment on the attention to historical detail. The communal dining table and high-backed chairs in the Great Hall were crafted from East Texas pine according to period specifications. Newman fabricated lanterns and metal chandeliers to illuminate all indoor spaces with a soft, yellow glow evocative of the light of tallow candles used in Europe during the Middle Ages. And while the voluminous gourmet kitchen boasts modern conveniences such as an industrial refrigerator and commercial stove, you’ll also spy historically accurate touches such as a wood-fired bread oven built into the castle wall.

Newman sheepishly admits, “I initially built the castle to get away from people.” The irony is not lost on Newman, who these days takes great pride in sharing his masterpiece with his many curious visitors. He not only personally hosts each tour but also provides a bit of pageantry with a narrative that includes a knighting ceremony, in which he solicits volunteers (usually children) to help defend the castle against potential invasion. Newman’s “knights” are asked to take an oath of loyalty, then are equipped with wooden swords for bouts of pretend jousting. 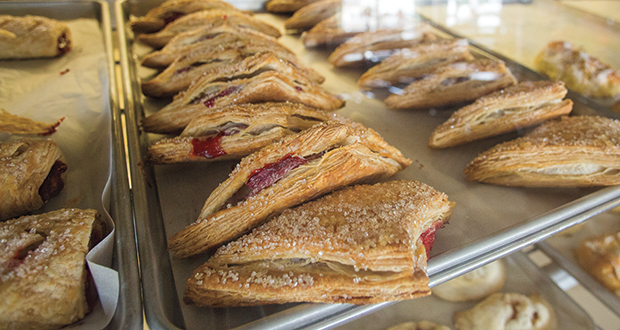 On the morning of my tour, we checked in as requested by 10:30 a.m. at Newman’s Bakery, where we paid for our tickets and received directions to the castle, barely 5 miles outside of town on a quiet country road. By about 10:50 a.m., a crowd—including a young woman in full Snow White costume—strolled around the perimeter of the moat, snapping photographs and enjoying the antics of Mike’s amiable “guard dog,” a shaggy Irish wolfhound named Avalon.

Following a brief introduction, Newman led us to the trebuchet, where he asked a volunteer to help him operate the catapult to launch a rock into the moat with an impressive splash. Then we went inside via the drawbridge, which can be raised and lowered by volunteers running inside a human-scaled hamster wheel. At this point, we were free to wander around as we pleased, and some of the more exuberant visitors made a mad dash to the top of the 62-foot bell tower via a winding staircase.

Others wandered through the arched walkway into the banquet hall and then on to the quaint chapel, a popular spot for contemplation. After an hour or so of exploring the castle’s nooks and crannies, we came together in the ground-floor kitchen to compare experiences.

Our tour concluded with a simple lunch brought from the bakery: deli sandwiches, donuts, cake, and cookies, served buffet-style. One woman volunteered, “My girlfriend had been bugging me to visit this place, so I sort of went just to get her off my back. But now that I’m here, I love it! I can’t wait to come back with my husband.” And certainly more than once I overheard the phrase, “This place is amazing!”

Newman himself remained immeasurably modest. In response to the frequent question, “How did you do this?” his stock reply was a shy smile, and, “Well—I just did.”