Get Your Kicks (and Souvenirs)

A Drive along the Mother road—Route 66 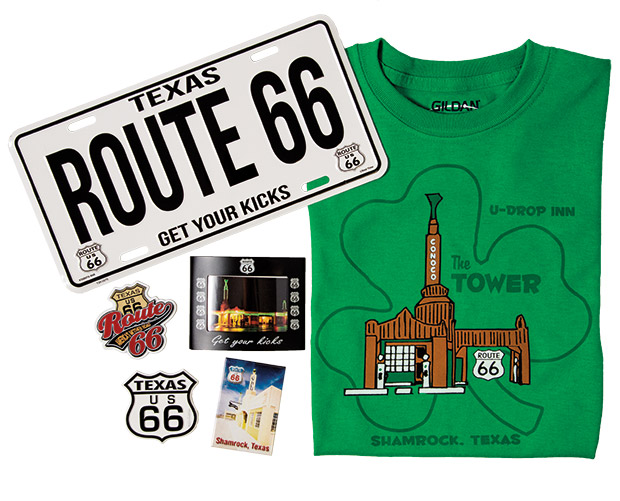 How can one explain the neon magnetism of Route 66? Before this summer, I could quote a few lines of the famous 1946 Bobby Troup lyric, but if pressed, I had trouble pinpointing on a map precisely where you could “get your kicks.”

And like most dads of the new millennium, I’ve seen the movie Cars—which features fictional towns on the route—at least a dozen times. So in late June I set out to acquaint myself with America’s most famous transcontinental highway, packing my wife and two small kids into the car and heading north from Fort Worth to drive the piece that cuts across the Texas Panhandle. A little more than four hours later, we found ourselves 14 miles this side of the Oklahoma border in the sleepy Panhandle town of Shamrock.

Also known as “The Mother Road,” Route 66 was established in 1926 and once traversed more than 2,400 miles from Illinois to California, but most stretches of the road had disappeared from “official” maps by the 1980s. But in Texas, as in other states, history buffs like to retrace the route for its nostalgia value. In Texas, the route encompasses less than 200 miles, more or less bookended by the towns of Shamrock on the east and Glenrio on the west. In Shamrock, the Art Deco-style U-Drop Inn serves as a visitor center and informal Route 66 museum, welcoming legions of fans annually. Last year, according to staff member Diane Clonts, some 12,000 people—half of them travelers from abroad—signed the visitor’s log.

“The Europeans often tell us two things,” says Diane. “To them, Route 66 represents freedom. To be able to go such long distances, through so many states; they love that. The other thing they mention is the expansiveness. The stretch in Texas is really vast and beautiful.”

On the day we stop by, Diane and her colleague Becky Adams are excited about the impending arrival of William Shatner, due to roll through soon on a futuristic motorcycle prototype called the Rivet. Shatner’s visit fits with the long parade of classic car clubs, tour buses, and the occasional television crews that stop in Shamrock to “shoot and scoot,” says Larry Clonts, Diane’s husband and the town’s main tourism booster. He tells me that a crew from The Food Network had just been by after filming an episode at Amarillo’s Big Texan.

Built in 1936 as a Conoco service station and restaurant, the U-Drop building had fallen into disrepair by the early 1990s. But the design of architect J.C. Berry (who hailed from nearby Pampa), which features a signature tower embellished with green and red neon, proved to be its saving grace. Over the years, residents and tourists alike rallied for its restoration, and a $1.7-million Texas Department of Transportation grant helped restore the structure to its original appearance in 2003 and 2004.

As we take in some of the museum exhibits, which include historic photos and memorabilia ranging from matchbook covers and vintage postcards to 1930s oil cans, a lone Harley rumbles in, its rider dressed in black leather. I learn that he is a soft-spoken Swiss man named Rob Vrijhof, who is celebrating his 60th birthday by spending nearly three weeks traveling Route 66 throughout the United States. “Art Deco has been one of my hobbies for 25 years,” he tells us. “I love this building.”

These days, a lot of visitors recognize the U-Drop Inn as the inspiration for Ramone’s Body Shop in Pixar’s 2006 movie Cars. Our son Christopher enjoys a small theater area where the movie plays—a welcome diversion for parents who want to meander. Outside in the parking lot, a replica of “Tow Mater,” the rusty yet trusty tow truck from the movie, invites folks to climb on for photos (and plenty do).

The U-Drop Inn features myriad Route 66 souvenirs, including drawings of the building by local artist Faye Connor and beautiful hand-sewn handbags designed by area resident Della Mae Stokes. But Becky Adams tells me that the best sellers by far are T-shirts made from locally grown organic cotton by third-generation farmer Gary Oldham. Oldham’s “S.O.S. From Texas” designs celebrate the route itself and the U-Drop Inn. Oldham says that “S.O.S.” stands for “Save Our Soil,” a slogan adopted after his family switched to organic farming in 1992.

“They really soften as they age,” says Oldham. “They’re premium cotton shirts that will wear for many years. They’re hard to beat.”

Oldham’s farm sprawls out 15 miles south of Shamrock. For most of his life, he has lived in a house his grandfather built here. He remembers his teenage years cruising Route 66 with fondness. “In the 1960s, it was the main drag. There was so much neon you’d have thought you were in Vegas,” he says. “I think it’s popular today because people have nostalgia for simpler days.”

After we depart, we turn our car wheels onto the storied road and drive west a few more miles, taking in the wide vistas. If it weren’t for an impatient toddler and obligations at home, I like to think we’d still be getting our Route 66 kicks heading west.