Written by: Paul McDonnold
Photos by: Ian A. Stewart 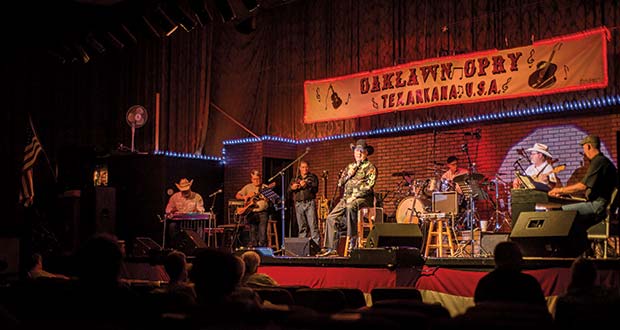 Bobby Primm, a regular performer at the Oaklawn Opry, sings with the house band.

Something about the boxy shape of the building first catches the eye. It’s broader and taller than the 1960s-era Texarkana shopping center that surrounds it. A modest sign over the entrance reads: Oaklawn Opry, Country Music Theater. It looks like something past its time, an old civic auditorium, maybe, where Elvis once gyrated. But this is no relic. There will be a show tonight.

Inside, the lobby retains some faded splendor of the single-screen cinema it once was; an arched mirror on the staircase wall catches the glow of a chandelier. The concession stand is still in place, selling snacks like popcorn, hot dogs, and nachos to the patrons who socialize in clusters as they wait for the weekly Saturday night show to begin.

The friendly and casual atmosphere recalls country music’s early days, when word of a barn dance or fiddlers’ convention drew folks from far and wide to hear music at someone’s home or a local dancehall. This was when live music was the only kind—before anyone had figured out how to broadcast sound across airwaves or record music by laying it down in grooves of vinyl for later enjoyment; before the Grand Ole Opry popularized country music in the late 1920s. Today, the heirs of such gatherings still exist in local country music shows like The Oaklawn Opry and its crosstown counterpart, the Maytag Opry.

“We just love music,” says Oaklawn owner Henry Matthews, who bought the auditorium in 1994 after playing fiddle in the house band. The old Oaklawn Cinema had been a terrible mess when the previous owners bought it in 1992. But they cleaned it up for a successful opening night, when 100 people had to be turned away. The Opry has been a more-or-less weekly event ever since. Matthews, now 70, works a day job as an electric technician and still fronts the opry’s house band, Country Plus. “As long as I’m able to do it, I want to keep doing it,” he says.

Inside the 560-seat theater, ceiling fans swirl and strings of red and blue lights frame the stage. Plucks of guitar strings and the sawing of fiddle bows fill the air as the band warms up. When the stage lights come on, the band launches into a smooth and tight rendition of “Orange Blossom Special,” with Matthews leading the charge on fiddle.

The drummer, Jay Launius, banters humorously with the band, and introduces the singers—a rotating cast of local and regional talent. A typical show lasts about two-and-a-half hours and features four to five singers performing a couple of sets each. While Oaklawn has occasionally hosted high-profile acts, such as Connie Smith and the late Little Jimmy Dickens, most of the performers are not major stars.
But that connects Oaklawn more closely to country music’s roots, which were less about star power and more about regular people making music for each other’s enjoyment. In fact, George Hay, who launched the Grand Ole Opry on Nashville’s WSM radio station in 1927, first coined the term “opry” as a dim-inutive of opera. He wanted to convey country music’s focus on the realities of normal life.

Oaklawn Opry performers typically sing well-known standards from pioneers like Patsy Cline and new traditionalists like George Strait. During intermission, a few of the performers mill around and visit with fans like Mike Helms, who runs another opry house across town. Helms started the Maytag Opry in 2002 at his Texarkana appliance store. The building had once been an auction house and had a stage in back, which gave Helms the idea of pushing the appliances out of the way one evening after closing.

“At the time, a couple of friends would come over and we’d play music, and it just took off from there,” says Helms, who plays lead guitar. “We had a fellow named Terry Tucker there one night playing, and somebody in the audience yelled out, ‘What do you call this place?’ He looked around and saw the brand name on a washer and said, ‘The Maytag Opry!’ and it stuck.”

When Helms moved his appliance shop in 2009, he found a dedicated home for the Maytag Opry in an old building just west of downtown, where he and co-owner Janice Parks host the Opry every Friday night, with a format and length similar to the Oaklawn Opry. Food and drinks—a full potluck on the first Friday of the month, and cookies at every show—are set up in a large side room. Photos of country artists adorn the walls, along with vintage business signs, musical instruments, and antique appliances like a wooden, hand-cranked washing machine from the 1870s. The Maytag Opry, with a capacity of 125 and a dance floor in front of the stage, has a laid-back, intimate atmosphere. As the music starts, some audience members get up to dance, while others listen in their seats.

Toward the end of the show, as the Maytag Opry Band plays the old-time country instrumental “Remington Ride,” the dancers move across the floor two-by-two, circling like a wagon wheel. If you’re one of the dancers, it’s the band, the audience, and the décor that’s slowly, comfortably spinning. There’s something very relaxing about it all, especially at the end of a busy week. Live music has a way of lifting mood and spirit, more so than listening to a recording. In our age of media saturation, the Oaklawn and Maytag opries embody such benefits with their lively tribute to an earlier era of family-friendly entertainment.