Written by Lois Rodriguez, Photographs by J. Griffis Smith | From the June 2014 issue | Updated: July 10, 2020 | Filed Under: made in texasTRAVEL 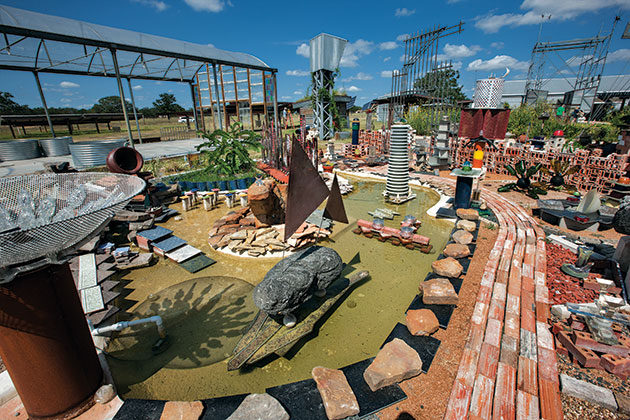 The swath of Texas 71 that stretches between Austin and Houston is a well-traveled stretch for Longhorn fans, Houstonians with kids at the University of Texas, Austinites headed to H-town to binge on museums, and all manner of east-west adventurers. Typically these road warriors, myself included, are dead-set on their destinations, and we hit the turn signal to pause only for essentials: coffee, fuel, and fruit-filled kolaches.

But what’s a road trip without the occasional whimsical detour? The results can be eye-opening, inspiring, and a whole lot of fun. Which is to say that it would be a shame to cruise by the Industrial Country Market in Columbus (just a few miles northwest of the I-10 juncture), without taking a closer look. From the highway, the self-proclaimed “non-general general store” looks a bit like a ranch gone feral, with its sprawl of corrugated metal, gleaming solar panels, and colored glass. There’s a good reason the ever-evolving complex defies easy explanation: It’s a combination gift shop, art gallery, sculpture garden, nursery, and education center. And here’s the kicker—the entire operation is 100 percent off-the-grid, sustained by solar energy and more than 40,000 gallons of collected rainwater.

On a recent trip to Houston, my kids and I spent a couple of hours poking around the 6,000-square-foot retail store, which sells everything from plastic toys to wind chimes, garden tools, and elaborate metal sculptures created by Chris Maxa, a popular artist based in Leakey. Don’t expect lunch here (find that at nearby Weikel’s or Hruska’s), but there is free water chilled by solar power, and you can purchase soda and European chocolate, as well as fresh spices and global seasonings to inspire future meals.

Exit through the far end of the store, and you’ll amble beneath an arbor of passion vines, over a bridge that crosses a reed-framed pond brimming with colorful goldfish, and along a brick path into a sculpture garden built by Houston artist Buddy Merrow, who makes good use of repurposed materials like wrought iron, glass bottles, and cement bricks. An adjacent cottage houses a gallery featuring local art, as well as pottery and other fair-trade wares from around the world. There’s also a greenhouse where hydroponically grown herbs, succulents, lettuces, and juicy tomatoes flourish.

Industrial Country Market is the creation of Michele and Daniel Bretch, who decided that Columbus was the perfect midway spot between their business in Houston and their sons in Austin. In 1995, they built a weekend home here, and in 2005 they purchased the 45-acre site where the market is located. “My husband has always been fascinated by the idea that you can capture and use the sun’s energy,” says Michele. “He realized that solar would work.”

The engine of the complex is the market’s “power room,” a wall of recycled batteries that helps people visualize what’s happening. As a sign explains, batteries are used to store the sun’s energy. “During the day, we run the market directly off the sun,” Daniel explains. “That’s why we’re open 10-6.” During those daylight hours, the batteries collect energy that keeps things humming along at night. The rainwater—a precious commodity in Texas—is collected in two swimming pools and a variety of tanks and drums.

Michele explains that for folks who want to dig deeper into the challenges and rewards of living off-the-grid, there’s also an educational facility where she and Daniel, along with other instructors, teach classes on everything from hydroponic gardening to beekeeping and harnessing solar energy.

General Manager Matt Hartmann runs the store and the greenhouse, where succulents sell at a brisk clip. If you show interest in various plants, don’t be surprised if you walk away with a free clipping of a passion vine or basil plant. The Bretchs’ newest addition to the complex is a “butterflea market” that features fine antiques, medical posters, granite creations, and vintage kitchenware.

Daniel hopes that the takeaway from visiting the market is inspiration. “The primary thing we want to show is that using the sun can make sense,” he says. “We love what we do,” he continues. “It’s a challenge, like anything, but I’m like a seven-year-old child being able to run a commercial and educational venture on my own terms. A side benefit is that nice people come to our store, and then they keep coming back.”