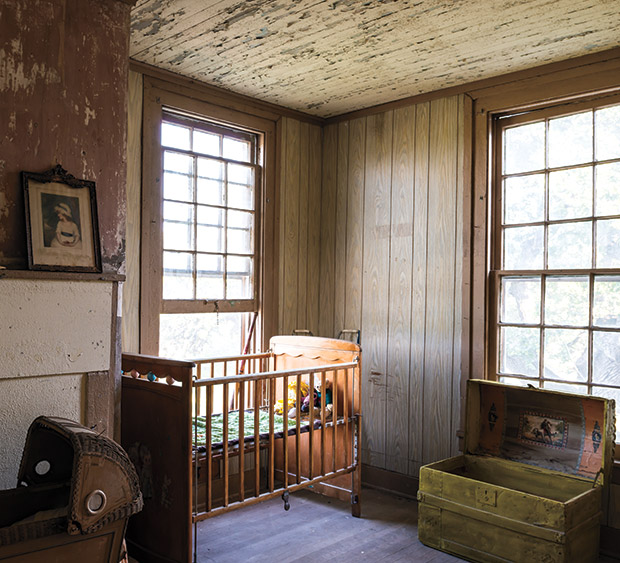 On October 26, this year, the Magnolia Hotel’s Halloween Haunted House will include a “Thriller” flashmob dance.

It’s a warm evening, and I’ve joined a group of about 20 people gathering inside the breezeway of a two-story building a block or so from Seguin’s town square. The structure has seen better days, a lot of them, and we’re here to hear about some of those days. You could also say that we’ve come to hear about some of its worst days.

“Are you ready for the ghosts? I am.” With that, co-owner Erin Wallace Ghedi pushes apart a set of sliding wooden doors and leads us into the Smoking Room, where she begins telling the story of the Magnolia Hotel.

Magnolia Hotel is at 203 S. Crockett St. in Seguin. For details about tour dates and times, see the hotel’s Facebook page and www.hauntedmagnoliahotel.com.

“This is where a two-room log cabin was built, around 1840, by Texas Ranger and Seguin co-founder James Campbell,” Erin says, as we gaze around a room filled with display cases of memorabilia and antique furnishings. In the ensuing 176 years, she tells us, this and other parts of the building served as a stagecoach stop, a hotel called the Magnolia, an apartment building, and a private residence before spending two decades abandoned. Erin and her husband, Jim Ghedi, bought the building in 2013 and revived the name Magnolia Hotel to honor its glory days of the mid- to late-1800s. “Many considered it the finest hotel in Texas,” she says.

Today, though not a hotel, the Magnolia once again welcomes guests—both to learn about its history and to perhaps experience its paranormal activity. “Just open your mind. Heighten your senses,” Erin tells us, “and they will come forward.”

Shortly after that, a woman across the room shudders slightly and looks down at her elbow and then over her shoulder. Surprised to find no one standing behind her, she says, “Something just touched me.”

The couple never intended to own a haunted house. “We wanted a place to fix up on the weekends,” Jim says. “When we bought it we had no idea it was such a historic building.”

They also didn’t know it was haunted. “We even asked the owner,” says Erin. “She said she was born and raised here and never had any experiences. But on our first night here, after popping the champagne, we heard a door slam, and then a cold breeze passed by us and Jim said, ‘So much for it not being haunted.’”

Unexplained sights, sounds, and even smells have regularly occurred since then, they say.

Erin, who has written books on the paranormal history of Seguin and New Braunfels, researched her new property and some of the people associated with it. Texas Ranger James Campbell, it turns out, was killed by Comanches a few years after building his cabin. Later, a woman was said to have died of grief while waiting for her boyfriend to arrive at the stagecoach stop; one distraught man shot himself in front of the hotel. Erin says she understands why the spirits of those and many other people express themselves in the old hotel, because she actually grew up with similar hauntings. “My mother was an incredible psychic,” she says. “And I can sense and see spirits, but only when they choose to come forward.” It’s this openness to the experience, she believes, that encourages the spirits to manifest.

So far, she has counted at least 17 spirits that haunt nearly every room in the place. “The activity is so intense. They like to shake the doors and bang on the walls,” Erin says, quickly adding, “It doesn’t bother us in any way.” Instead, when that happens, she researches to find out who they were.

Others want to research the place, too. Ghost-hunters and paranormal investigators have shown great interest in the Magnolia Hotel. It’s been featured in programs on the Discovery Channel, PBS, and the Travel Channel, to name a few.

Then, last October, Erin and Jim led their first Halloween haunted house tour. “We were expecting maybe a couple dozen people,” Erin says. “Three hundred showed up. It was a lot of fun.”

They’ve been giving regular ghost tours ever since.

From the Smoking Room, Erin leads us to the Ball Room, which is handsomely appointed with random family portraits and keepsakes rescued from the building’s attic. Although some objects have been linked to specific former residents, not everything has been documented. “We don’t even know who some of these people are,” Jim tells me while pointing out some of the photographs.

There are no fake cobwebs or spooky lighting effects. No actors jump out for an easy scare, which suits our group, a mix of part-time haunting hobbyists and veteran paranormal sleuths who snap photos and check for apparitions in windows and unexplained reflections in mirrors. Some hold K2 meters, which typically register electromagnetic activity from phones, kitchen appliances, and electrical wiring, although tonight they’re being used to gauge energy from manifesting spirits. The lights on their meters flicker frequently.

Erin continues with tales of suicidal cowboys, distraught traveling salesmen, fortune-tellers, and vengeful ladies of the evening. Past the old hotel saloon, the ongoing restoration has left rooms in various states of completion. It adds an authentic touch of disorientation to the ambiance, especially as the night gets darker and more people report feeling cold spots and other sensations.

Upstairs, where several cats roam in and out of windows left open for ventilation, Erin shows photographs of paranormal activity and brings out dowsing rods that move about. Whenever she senses spirits coming forward for a particular individual in the group, she gives impromptu readings.

Inside the Children’s Room, the focus is on a pinwheel and ball Erin has placed on the floor. Several children lived here in the 1870s, and Erin says their ghosts sometimes play in this room along with the ghost of 12-year-old Emma Voeckler, who in 1874 was murdered in nearby New Braunfels. Although the pinwheel remains still, the ball definitely moves after Irene the cat darts across the creaky floorboards to break our heavy concentration.

One of the most anticipated stories comes near the tour’s end, in a dark corner room where the murderer of Emma Voeckler, Wilhelm Faust, slept on the night of her death. It was one of New Braunfels’ most notorious crimes, and the story—complete with deceit and a mistaken identity—leaves us unsettled.

As the group shares photos, I reflect on how Wallace’s narrative, filled with frontier characters and small-town newsmakers, is also rich with local history—176 years’ worth—albeit some of it unsavory.

“Ghosts are history,” Jim had told me earlier, and who could disagree? For those who believe that the truth is out there—well, maybe it’s in here, too, where people have been shot and stabbed and befallen various misfortunes. At the Magnolia Hotel, the end is really just the beginning of the story.