Stay and Play on the Texas Coast 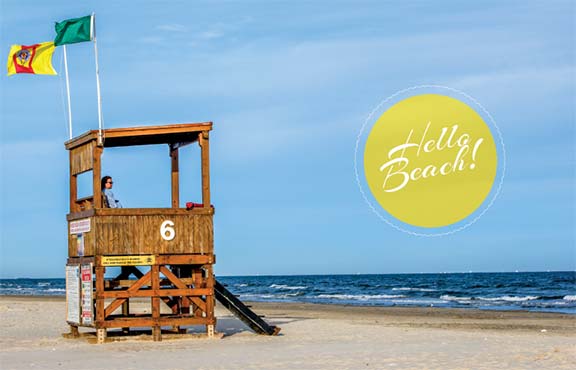 After years of visiting Texas beaches whenever I could, this spring I made the leap and moved my family to Galveston.

But fulfilling my lifelong dream of living on the coast has come with the bittersweet realization that I probably won’t be hanging out as much on all those other Texas beaches I have come to know and love—and that’s caused me to look back over four decades of beach-going adventures. Sorting through the fish stories, sandcastle blueprints, gumbo recipes, and hilariously embarrassing bathing-suit photos, I’ve come up with a few tips for your next beach vacation. 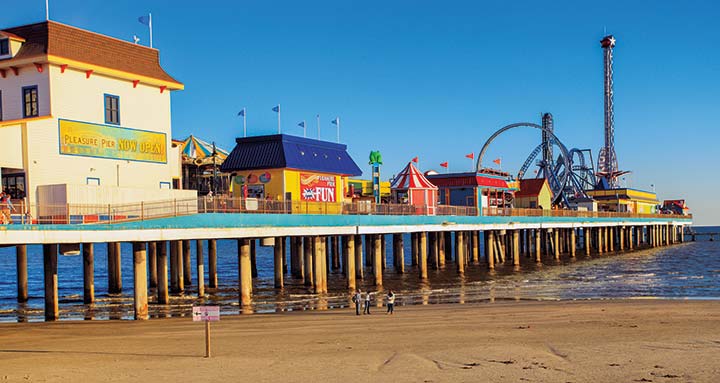 Where to Eat: Galveston

Galveston beaches are full of character, and in fact it’s the history of the island that hooked me. At the first Foodways Texas Symposium, held on Galveston Island in 2011 to promote and celebrate the history of Texas foods, I gave a talk about the glory days of the Galveston Bay oyster industry in the 1800s. The group gathered afterward at Gaido’s restaurant, which dates to 1911, and local oystermen hosted a tasting of oysters from reefs that were famous a century ago. Colorful names that have slipped from memory, like Pepper Grove oysters and Lady’s Pass oysters, came back to life. That re-creation of Texas oyster history was one of the most exciting moments of my career—and it could have only happened in Galveston.

I was thrilled when my wife and I found a house in Galveston and moved there a few months ago. For a history buff like me, my new homeport is one of the most fascinating places in Texas. In the mid-1800s, during its heyday as a banking and cotton-shipping center, it was the biggest city in Texas, known as the “Wall Street of the South.” The city’s glory years ended with the hurricane of 1900; afterward, the Port of Houston became the region’s preferred port. To get an idea of the city’s wealth during this period, take time to tour the magnificent Victorian 1892 Bishop’s Palace (open daily), or stroll or bike through the 50-square-block East End Historical District. Elsewhere on the island, museums delve into themes ranging from the Great Storm of 1900 to railroading, aviation, and offshore oil exploration.

Even Galveston parties have a long history. Galveston’s Mardi Gras celebration dates to 1867. With 20 krewes, more than 20 parades, and nearly a half-million participants each year, it is one of the nation’s largest. Galveston also boasts a shrimp festival in September, a food and wine festival in April, a family-friendly Oktoberfest, and the annual Dickens on the Strand event in December. The first Juneteenth celebration was held in Galveston on June 19, 1865. This year, throughout the month of June, to commemorate the 150th anniversary of the event, the city will put on its largest celebration ever with lectures, readings, picnics, barbecues, reenactments, and a Juneteenth parade.

Beach lovers can stroll along the Seawall, which runs for some 10 miles along the city’s edge, or make a day of it at one of Galveston’s “beach parks”—groomed beaches with parking where you can rent shade umbrellas and chairs. We love Stewart Beach, a family-oriented park with gentle waves, shallow water, umbrella and beach chair rentals, and volleyball courts. East Beach has a pavilion that sells adult beverages; it draws a younger crowd, especially during live-music events. On the west end of the island, Galveston Island State Park offers cabins and tent sites for those wanting to stay overnight, as well as birdwatching opportunities. 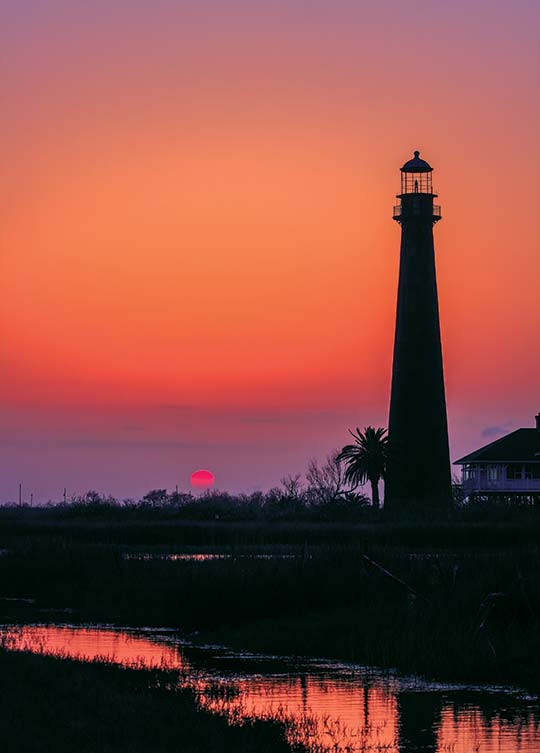 Where to Eat: Bolivar Peninsula

For more information on lodging, attractions, events, and restaurants, contact the Bolivar Peninsula Chamber of Commerce, 409/684-5940.

I’ll never forget driving down the beach on the Bolivar Peninsula years ago and passing a couple comfortably seated in an upholstered loveseat set up beside their pick-up truck. They were holding surfcasting rods in one hand and beer cans in the other while country music spilled from the truck’s sound system.

To call Bolivar one of the more “casual” beaches in Texas is something of an understatement—“eccentric” may be closer to the truth. Named for South American revolutionary Simon Bolivar and allegedly favored by former members of Jean Lafitte’s pirate band, this spit of sand has a reputation for hard partying, barbecued crabs, and rare birds of all sorts.

The most scenic way to get there is via the free Bolivar Ferry, which connects the western tip of the Bolivar Peninsula with Galveston’s east end. Kids love the 2.7-mile, 20-minute trip; it’s just long enough to climb the stairs to the upper deck and watch the leaping bottlenose dolphins and the oil tankers plying the Houston Ship Channel. The ferry operates 24 hours per day, 365 days a year.

Once you’re there, don’t miss the Smith Oaks Sanctuary on High Island, a birdwatching area maintained by the Houston Audubon Society, just past the far eastern end of the peninsula. My kids love “The Rookery,” a man-made island that’s a nesting place for thousands of great herons, roseate spoonbills, and snowy egrets. The birds are so close you don’t need binoculars.

At the other end of Bolivar Peninsula, we like the Bolivar Flats Shorebird Sanctuary, also maintained by Houston Audubon. (Permits to park on the beach are sold at most retail establishments on the peninsula.) During a recent visit, we hiked a short distance before coming upon thousands of sandpipers, dowitchers, and avocets darting in and out of the waves. A row of oil tankers anchored just offshore made an unlikely backdrop to our nature walk. But such is the rural/industrial ambiance of Bolivar. 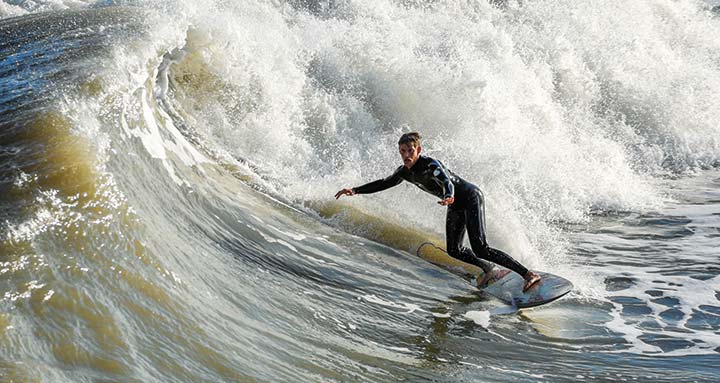 Where to Eat: Rockport

During the 25 years I lived in Austin, Port Aransas, at the northern tip of Mustang Island, was my beach. The wide sands, gentle waves, and shallow waters are perfect for kids. My favorite pastime there was floating on my stomach in a few inches of water as the kids splashed around me pretending I was an alligator.

The whole area features nice beaches, from crescent-shaped Rockport beach to the north, down to Port Aransas and Mustang Island State Park, with more than five miles of coastline. And if you’re interested in truly unspoiled beaches, head south to North Padre Island, the entry point for the Padre Island National Seashore, the longest stretch of undeveloped barrier island in the world.

We always rented a condo in Port Aransas so I could cook gumbo. Back in the early 1990s, I even talked an Aransas Pass boat captain named Dale Lee into taking me out shrimping so I could learn about shrimp. I discovered that wild-caught Texas brown shrimp, with their bold bromine flavor, are the ones I like the best. Note, too, that Gulf shrimpers go out for several days, so their catch is usually frozen onboard. Bay shrimpers are only out for a few hours, so you can buy their shrimp fresh. (It pays to get to know a bay shrimper.)

Corpus Christi-area beach towns are also a great place to take the kids fishing. You can rent a rod and reel at any of the tackle shops in the area. My favorite fishing spot is Packery Channel, a narrow waterway connecting the Gulf of Mexico with Corpus Christi Bay just south of Mustang Island State Park. The last time we fished there, we caught a slew of snapper. No kitchen? No problem! Just bring your fish to a local “we’ll cook your catch” restaurant.

There are scads of other attractions in the area. Every time we drive by a company called Horses on the Beach, a seaside stable on North Padre Island, the kids remind me that I promised to take them horseback riding on the beach someday. 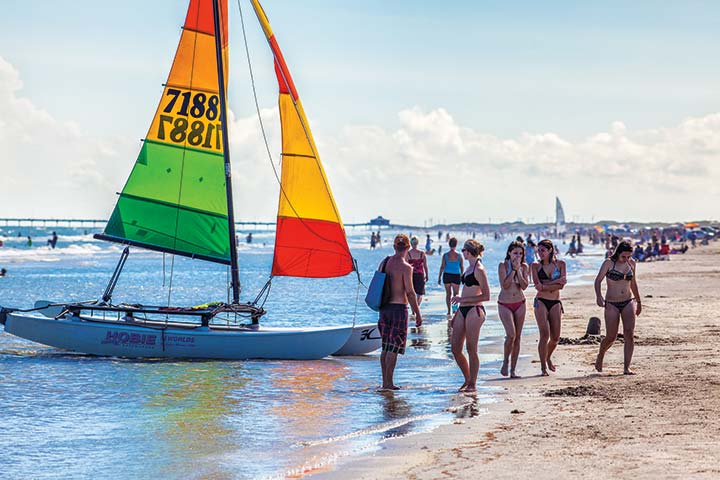 Warm weather, white sand, clear waters, and activities galore make South Padre Island a favorite of beach connoisseurs. If you want to visit a secluded stretch of sand, buy a county permit and drive north up the beach where the road ends at Access Point 5 into Edwin King Atwood Park. If you plan on going far, take a four-wheel drive vehicle or a dirt bike, as beach-driving gets tough after a few miles.

Lying on the beach is my favorite activity, but my son and I often take a sand wedge and a couple of golf balls along. The white, fluffy sand of South Padre Island is perfect for practicing your sand game when nobody else is around.