Special events spice up the centennial 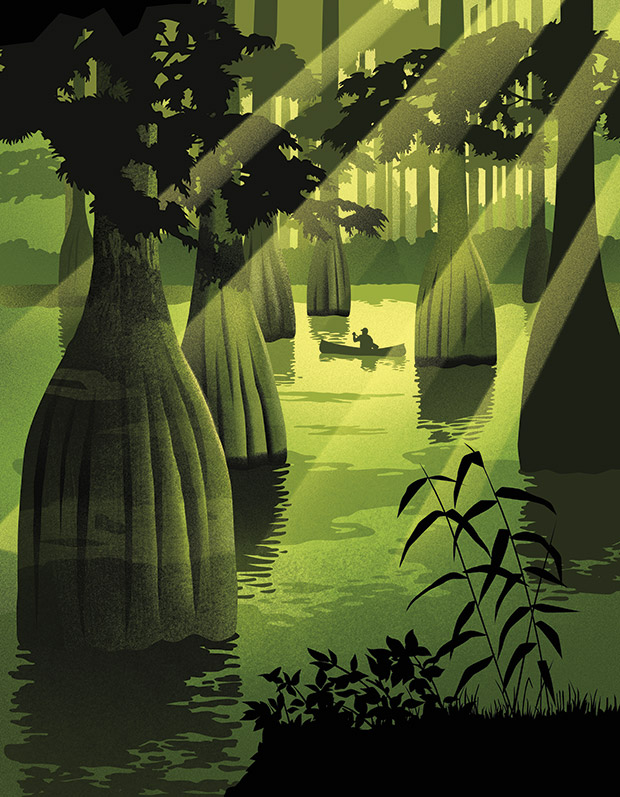 Every corner of the state—from the Big Bend to the Big Thicket, and Padre Island to the Panhandle’s Lake Meredith—is home to spectacular getaways and historic places worthy of national notice. If you haven’t visited some of the Lone Star State’s national parks and historic sites before, or haven’t been in a while, the National Park Service Centennial celebration adds special events to the many reasons to explore these places in 2016.

Big Thicket National Preserve north of Beaumont has set a goal of planting 100,000 longleaf pine seedlings for the 100th anniversary this year, replacing hundreds of acres lost to logging, pine beetle infestations, and hurricanes. The effort will require the green thumbs of numerous volunteers, who are encouraged to sign up for planting days January through March and again in November and December. Each volunteer gets a chance to plant multiple trees using tools provided to punch a hole in the dirt and drop in a seedling.

“We hope families can come out—the adults can make the hole and the kids can drop in the tree since they’re closer to the ground,” says Ken Hyde, chief of resource management at Big Thicket National Preserve. One day of planting trees has the potential to create a lifelong connection to the park—longleaf pine trees can live for more than 300 years and take half that time to reach their full height between 80 and 100 feet. They’re also part of an ecosystem that supports endangered species such as red-cockaded woodpeckers and Texas trailing phlox flowers.

To sign up for tree planting, call the Big Thicket Visitor Center at 409/951-6700. Even if you miss the chance to get your hands dirty, visitors to the park through the year can participate in the Share Your Thicket Photo Contest to showcase their skills and the beauty of the forest. Participants must be amateur photographers, take photos within the park, and upload them to Instagram tagged with #BigThicketPhotoContest. Winners are chosen monthly, with a grand-prize winner selected in the fall.

Texas’ largest national park—Big Bend National Park—has some big celebrations planned for the NPS centennial, including four days of festivities before Memorial Day and the grand-opening celebration
of the new Fossil Discovery Exhibit in September. 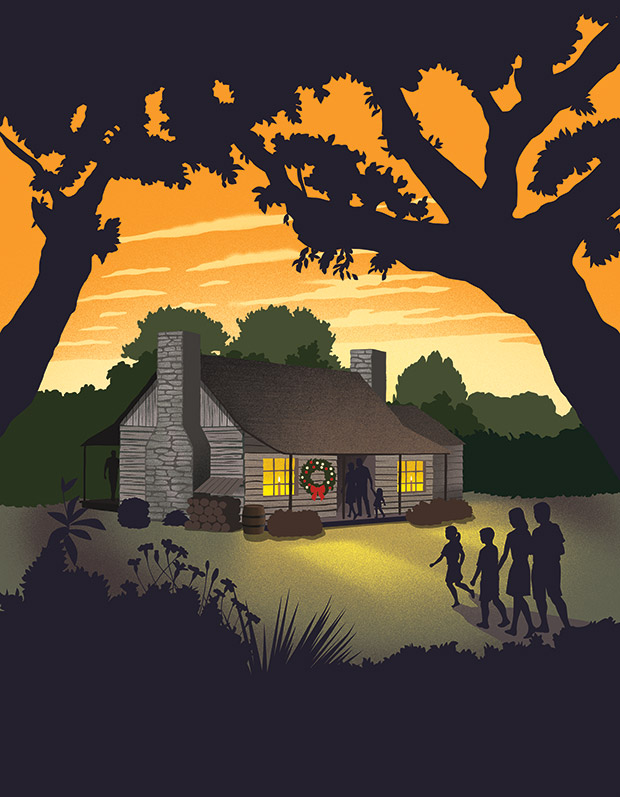 “The emphasis of the NPS centennial celebrations is to show people a lot of great options in their own backyards,” says Courtney Lyons-Garcia, executive director of the Big Bend Conservancy, a partner with Big Bend National Park. Big Bend’s National Park Service Centennial Celebration, May 26-29, provides opportunities to experience tours and talks that highlight some of the most interesting aspects
of the park, along with the conservancy’s contributions, taking a different focus each day.

Activities kick off 9 a.m. Thursday, May 26, with a talk about the international mining history along the border, plus a discussion of the relationship with Mexico and the conservancy’s role in raising funds for the park’s Border Crossing Station. The event concludes with a trip across the border to Boquillas, Mexico (bring passport and spending money), led by the park staff and conservancy directors.

On Friday evening, May 27, celebrate the NPS 100th birthday and the Big Bend Conservancy’s 20th birthday with a 6:30 p.m. party at Chisos Mountains Lodge. Later, at 10:15 p.m., bring binoculars to Route 13 (the road from Panther Junction to Rio Grande Village), Mile 15.3, for the don’t-miss night-sky viewing and discussion. Saturday, May 28, starts with an early-morning hike in the Chisos Basin, and wrap-up Sunday with an 8:30 a.m. Wetlands Wonders BioBlitz, which includes a birding walk, wildlife spotting, and wetlands restoration discussion. All events within the park are free and open to the public, and the schedule of activities provides plenty of free time to explore the park’s more than 800,000 acres on your own.

On September 24, the park plans a grand-opening celebration of its new Fossil Discovery Exhibit. The exhibit was completed as a “centennial challenge,” a government initiative that encouraged public-private partnerships on signature projects in national parks to celebrate the NPS anniversary. The park and conservancy partnered to build the exhibit, which will explore Big Bend’s paleontological
and geological past in a $1.35 million open-air pavilion about 20 miles inside the park from the US 385 entrance.

The pavilion will encompass three rooms, with two side rooms providing self-guided interpretation of the park’s four past environments—marine, coastal plain, inland floodplain, and volcanic highlands—and a classroom in the center. The exhibit rooms will contain life-size replicas of fossils found within Big Bend, including the park’s most recent dinosaur discovery—the skull of a Bravoceratops polyphemus—which, for the near future, can only be seen here. The rooms will also feature illustrations, diagrams, and text connecting the fossils with geological formations visible from the site.

A replica skeleton of a pterosaur Quetzacoatlus, the largest flying creature ever found, will hang from the ceiling of the classroom, where visitors will gather for presentations, such as a ranger-led discussion of the exhibits, and learn about new finds. In addition, a new website (scheduled to debut in February; www.fossildiscoveryexhibit.com) will share information on findings and research.

“We’re working hard to make this a place families can enjoy together,” says Lyons-Garcia, noting that the exhibit may draw visitors who aren’t big hikers and campers, and that it can inspire greater exploration of the park.

The Bullock Texas State History Museum in Austin takes a special look at Texas’ first national park with the Journey into Big Bend exhibit from April 22 to September 19. The exhibit will display photography, personal artifacts, and personal reflections regarding the park, along with monthly, curated selections from a social media photography contest on the museum’s website.

“Big Bend means something personal to the people who visit there, work there, and live in the area,” says Margaret Cook, deputy director of the Bullock Museum. “The exhibit will seek to explore what connects the park to the people who love it.”

Contemporary and archival photographs of the park will line the walls of the rotunda gallery on the museum’s third floor, where visitors can also see displays of artifacts, such as fossils and tools, and listen to audio interviews.

In addition to the exhibit, the Bullock IMAX Theatre will present MacGillivray Freeman’s National Parks Adventure 3-D for a year, beginning February 21, offering an exploration of the wild, untamed spaces that are preserved in America’s national parks. Call 512/936-8746. 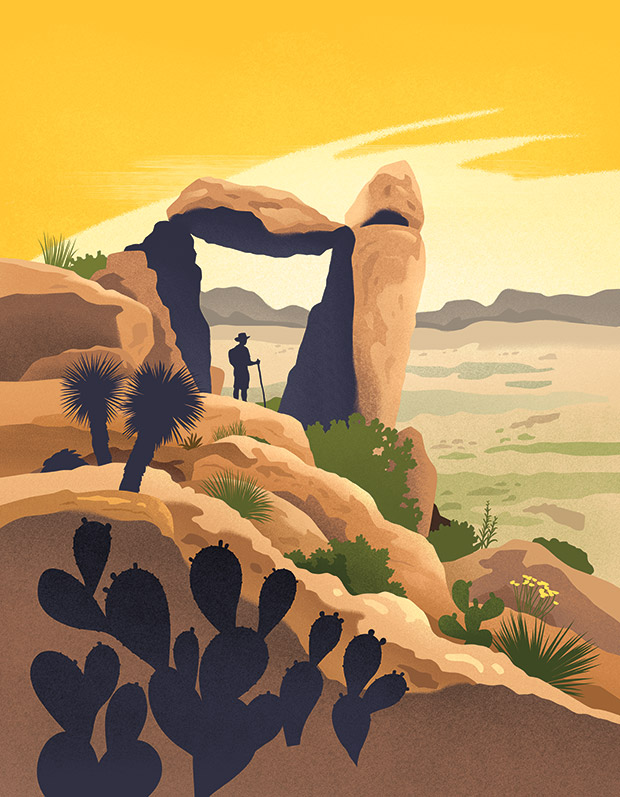 Near Austin, McKinney Falls State Park will host a Centennial Celebration to coincide with National Trails Day on June 4, highlighting the park’s place on the El Camino Real de los Tejas National Historic Trail. Park visitors may be familiar with the worn path on the limestone slab headed toward the namesake falls, but contrary to popular belief, it didn’t originate with modern-day hikers and swimmers—it’s a swale, or rut carved in the limestone over hundreds of years by travelers on the El Camino Real. Settler and horse breeder Thomas McKinney built his homestead in the 1840s next to where the trail crosses Onion Creek, leaving behind the stone ruins that can be seen along the park’s Homestead Trail today.

“Multiple routes of the Camino Real came together at that crossing,” says Steven Gonzales, executive director of the El Camino Real de los Tejas National Historic Trail Association. “It’s very important because it’s publicly accessible, which is extremely rare for this trail.” During the Spanish colonial era, the Camino ran from Mexico City to Louisiana, linking Spanish missions and settlements along the way. Despite traversing a huge swath across Texas from San Augustine to the Rio Grande, more than 99 percent of land that the trail crossed is now privately owned, effectively hiding it from public view. Gonzales says additional plans are in the works to open up a recently purchased trail site in East Texas as a historical park later in 2016. Find event information at 512/850-9073.

Each November, Resaca de la Palma Battlefield in Brownsville honors soldiers from both sides of the Mexican-American War with a Memorial Illumination event around Veterans Day. The second major battle of the war was fought on this stretch of the Rio Grande on May 9, 1846, with American forces pushing the Mexican army back in an effort to claim the Rio Grande as Texas’ southern border. The warm glow of each of the 8,000 luminarias in the field at dusk represents an American or Mexican soldier who fought in the area. The event includes living-history programs featuring camp life, weapons, and drills before the ceremony. Visitors are encouraged to bring long-barreled grill lighters to help light the luminarias. Call 956/541-2785 ext. 333.

Decades before Lyndon B. Johnson became a U.S. president, he was the son of a state legislator in small-town Johnson City, named for his forebears. The Victorian home he grew up in is restored to its 1920s appearance as part of the Lyndon B. Johnson National Historical Park. During “A Timeless Christmas in Johnson City” each December, the home takes on a cheery air as it’s decorated in homespun holiday finery, including a modest tree and gifts on display. Visitors also can take a short walk (less than a mile) along a lighted path to visit the older Johnson Settlement, which conjures a candlelit 1860s Christmas that would have been familiar to LBJ’s grandfather and great uncle as they built their cattle business here. This annual tradition is set for 6-9 p.m. on December 3 this year—more information is available at www.nps.gov/lyjo. To make a day of it, travelers can also visit the park’s LBJ Ranch unit about 15 minutes away in Stonewall, which offers a self-guided tour of the president’s birthplace and the “Texas White House.”