Ozona Outpost: Stop Off and Relax in Wide-Open Ozona

Written by: Michael Barr
Photos by: Will van Overbeek

Written by Art Williams, Photographs by Will van Overbeek | From the November 2017 issue | Updated: October 15, 2017 | Filed Under: detourTRAVEL 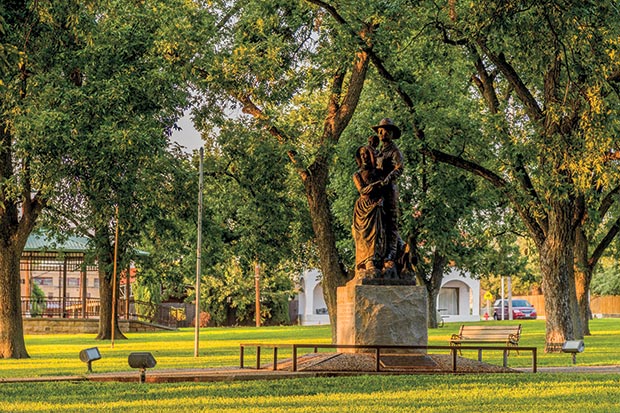 You get the idea of just how empty and remote the country around Ozona is when you learn that local officials installed a red light on top of the 1902 Crockett County Courthouse not only to summon the sheriff’s deputy but to guide travelers to town after dark.

Known these days primarily as a convenience stop between San Antonio and destinations out west, modern Ozona is often overlooked by visitors barreling through town on Interstate 10.

But don’t sell Ozona short. Just moments from the interstate, Ozona offers travelers a taste of West Texas past and present with an engaging history museum, downhome restaurants,
and friendly locals who appreciate the town’s slower pace of life.

Since 1938, visitors from all over the world have stopped at the Crockett County Courthouse square to take pictures with county namesake and Alamo hero David Crockett. Artist William M. McVey’s pink granite statue bears an inscription reflecting Crockett’s daring worldview: “Be sure you are right, then go ahead.”

“The best thing about Ozona is the quiet. And at night you can see the stars—every one of them.”

Just behind Crockett in the middle of the square, a bronze statue dubbed The Tie That Binds depicts a young pioneer family looking west—the woman in a bonnet, the man in full-brimmed hat and holding a boy. Created by Crockett County native Judy Black, the sculpture represents the hardships and community spirit of the pioneers who settled this isolated part of the world.

Ozona’s story continues across the street at the Crockett County Museum, where three stories of exhibits span from the Stone Age through the 1950s. Outdoors near the entrance, an early 20th-century wagon and water pump illustrate the challenges faced by settlers who spent most of their time and energy getting from place to place and finding water. With almost no surface water, Crockett County was uninha-bitable until the late 19th century, when the development of windmills and pumps allowed irrigation from the aquifer. The early settlers raised sheep and cattle, and the discovery of oil and gas in the 1920s made some of them millionaires.

The museum’s exhibits cover prehistoric fossils, Native American artifacts, and ranching tools, along with a few surprises. Among its exhibits chronicling the area’s ranching history, the museum highlights items that tell the story of female settlers, including elegant tea sets and delicate pieces of fine china from the early ranching days.

“The strong women of West Texas have a story that is often forgotten,” Museum Coordinator Emily Guerra says. “Our museum tells their story through the tea sets and china, along with a display of women’s hats and dresses from the early 20th century. It’s my favorite part of the museum.”

Next door to the museum is the stately 1902 Crockett County Courthouse. West Texas architect Oscar Ruffini designed the structure in the Second Empire style. Builders used locally quarried stone for the courthouse and also for the 1892 jail, parts of which are still in use. The jail resembles a church, although the belfry is really a hanging tower (the county never had to use it).

To experience more of Crockett County’s natural and cultural history, drive 30 miles west to the county’s edge, where a grand panoramic view of the Pecos River valley unfolds from the Lancaster Hill scenic loop (State Highway 290). From the overlook, the road descends about 2 miles to the Texas Historical Commission’s Fort Lancaster State Historic Site.

The U.S. Army established Fort Lancaster in 1855 on the San Antonio-El Paso road to protect a crossing on the Pecos River. Once home to 160 troops, including a company of Buffalo Soldiers, Fort Lancaster was abandoned in the 1870s and never garrisoned again. Visitors can tour its stone ruins (golf carts available) and view the recently renovated visitor center’s exhibits. A life-size camel replica interprets the Army’s 19th-century experiment to use camels as pack animals on the southwestern frontier. 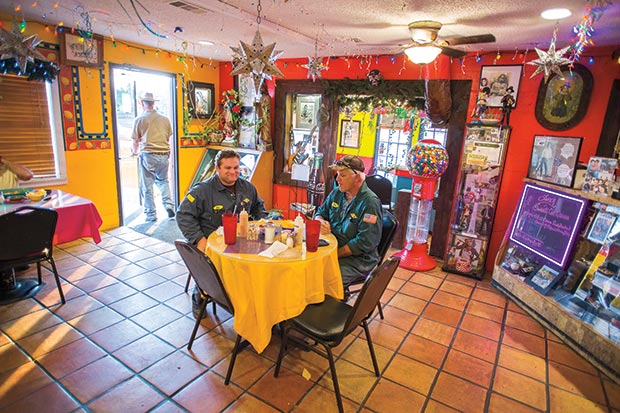 Pepe’s Café, in Ozona is a popular eatery.

But don’t venture west from Ozona—the only town in Crockett County—before getting something to eat. On the north side of the square, the family-run Pizza Mia serves satisfying pie made from fresh ingredients. Another reliable stop is The Cafe Next Door, featuring a menu of burgers, chicken-fried steak, and Mexican food, including a crisp and fresh fajita salad.

The friendly and relaxed service at the restaurants reflects the small-town atmosphere that Ozona residents appreciate in their home. There are no crowds and no traffic jams. No one is in a hurry. It is easy to strike up a conversation.

“Crockett County has the friendliest people in the world,” says Shanon Biggerstaff, president of the Ozona Chamber of Commerce & Visitor Center. “They love to visit over coffee at the Wool Growers Feed Store. And going to the post office in Ozona is a social event. You don’t just go. You have to plan for it.”

Nighttime is another local treasure. When darkness falls, the boundless West Texas sky could be the backdrop to a Star Wars movie. Local officials must have had nights like these in mind when they installed the light on top of the courthouse some 100 years ago.

“The best thing about Ozona is the quiet,” says one of their successors, County Judge Fred Deaton, a lifelong resident. “And at night you can see the stars—every one of them.”