A west texas photographer chases a 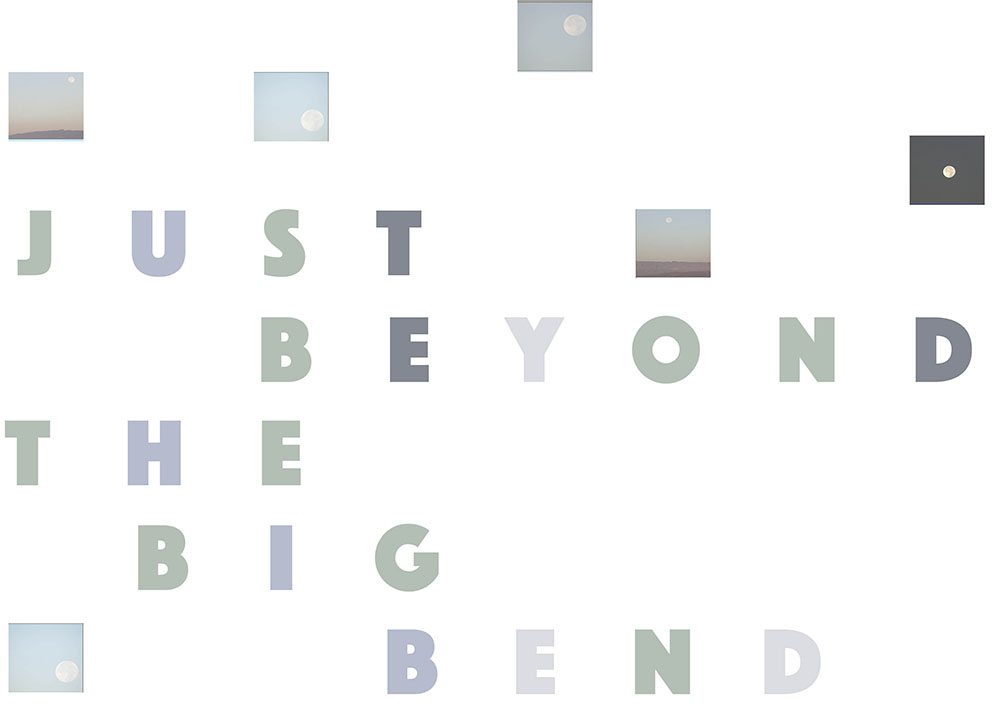 community of Marathon, where I’ve lived and maintained an art studio and gallery for the past 22 years, the surrounding desert grasslands give way to weathered hillocks and low-rise mountains. Standing out among them lies a distinct knoll shaped like a pyramid. Each fall, the full moon rises directly over this hilltop as the setting sun infuses the landscape with an ember-like glow. The moon, golden as it peaks over the summit, grows brighter while the sunlight fades, intensifying until it dominates the entire vista.

Determined to capture this dramatic transition one evening, I set up my camera and took a series of photographs. The result, a composition called One Hundred Moons (below), exemplifies how I explore the real and the abstract characteristics of the natural world through art and photography.

Born and raised in San Antonio, I’ve long found inspiration in the landscapes of Texas. The scenery of the high desert drew me to a life in the Big Bend, where I have a front row seat for the transformative natural forces that shape our world. I use digital and film photography, video, and computer software to create my work, frequently taking multiple photographs throughout a day or a season, and then combining them into composites and mosaics. They can suggest the passage of time over minutes or centuries, depict altered realities and dimensions, and often reflect the curious laws of nature that guide our existence.

My subject matter—like the shifting population of winter finches above melting snow in the composite Birdcage—illustrates the natural world in its constant state of change. Nothing ends up as it begins in nature. A morning glory vine overwhelms the garden trellis and, bottom side up, becomes a tornado in the composite Twister. A falling tumbleweed on fire turns into Meteor. Elements of time and dimension appear in an endless train traveling through an infinite plain in the combo of three photos, known as a triptych, in Marfa Plateau. Rain, waves, birds, baitfish, and sunlight converge in a split second in the triptych Seabirds before clouds move on. In the mosaic Hailstones, water forms hailstones in minutes while calcite crystals take centuries.

Like most artists, I’m always searching for ways to evolve creatively. But the genesis of my work can be traced to a couple of experiences early in my career. One summer in the 1970s, while I was a student at the University of North Texas in Denton, I got a job photographing the area for the Army Corps of Engineers. The project was designed to identify and document archeological sites, historic structures, towns, and landscapes that would be affected or submerged by the creation of the 29,000-acre Lake Ray Roberts. Farming communities would suddenly find themselves lakeside while miles of pastures, creeks, and trees would disappear underwater. My job was to capture the character of the people and places before the transformation occurred.

During that summer, I also met Carlotta Corpron, a pioneer of American photography known for her light-bending abstracts produced in the 1940s and ’50s. I had answered Corpron’s newspaper ad seeking a gardener, and I worked for her on the weekends to supplement my pay from the Corps project. Sometimes when I’d take a break, Corpron would bring me iced tea and we’d share our thoughts about art and the creative process. She showed me how to see beyond photography’s conventions—how photographs capture not only light and shadow but how the medium explores ideas of space, dimension, time, and transformation.

Transformation is the fundamental principal driving the natural world. The summer of 1975 drove home this realization with unusual clarity as I photographed landscapes that would soon undergo dramatic alterations or disappear completely. But the fact is, nothing I photographed during those years would remain the same, whether reshaped by floodwaters or simply the passage of time.

During the decades that followed, some of the images from that period fell by the wayside. I remember taking them. At least I think I do. Perhaps I’ve misplaced them or thrown them away, likely because I felt they weren’t good enough to keep. But I’m reminded of something else Corpron taught me. The images that really matter are the ones that survive. Seasons change. Memories fade. But art? Art endures. 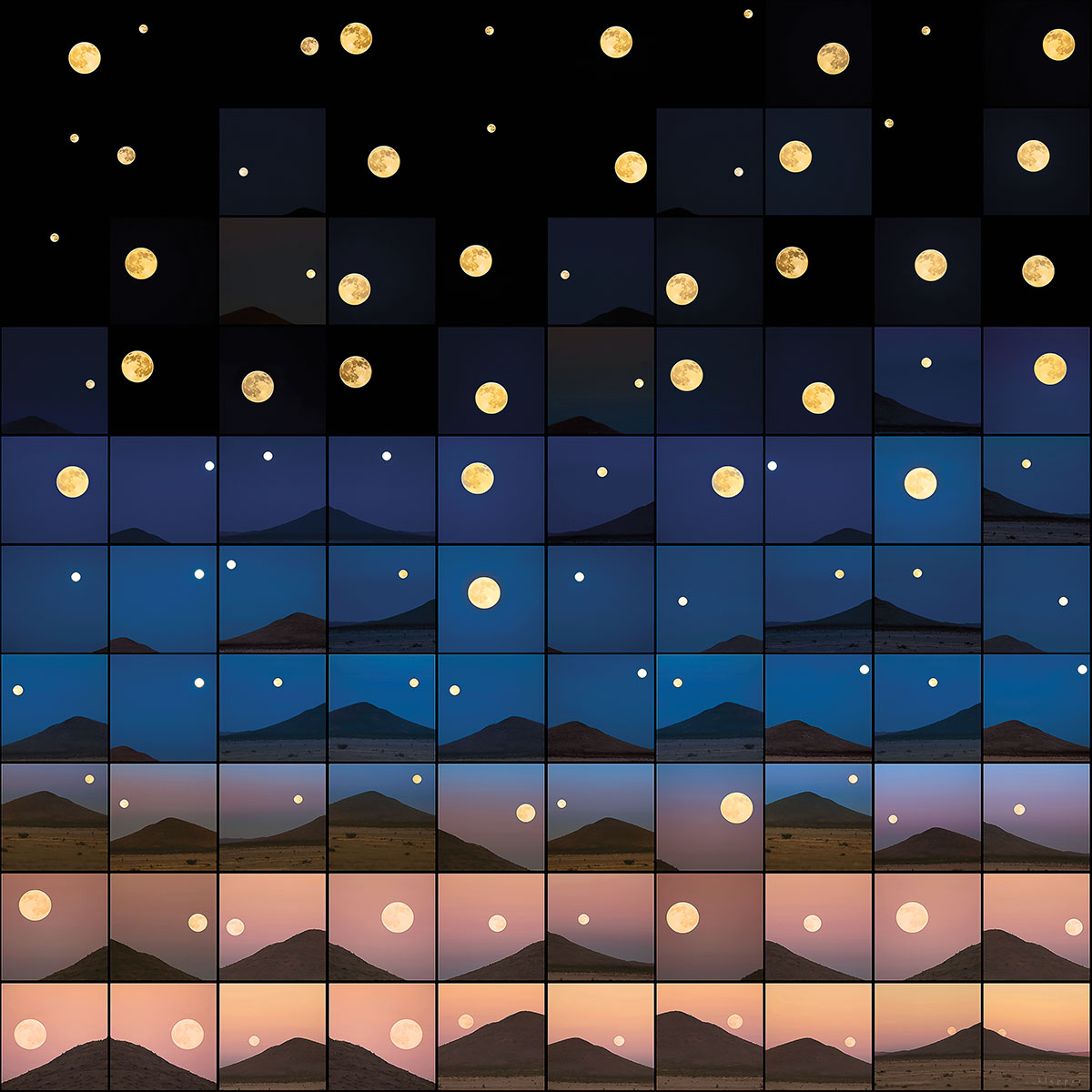 A mosaic comprising a series of harvest moon photographs taken in Marathon; 2005. The band Explosions in the Sky selected the image for the cover of its 2021 album, Big Bend. 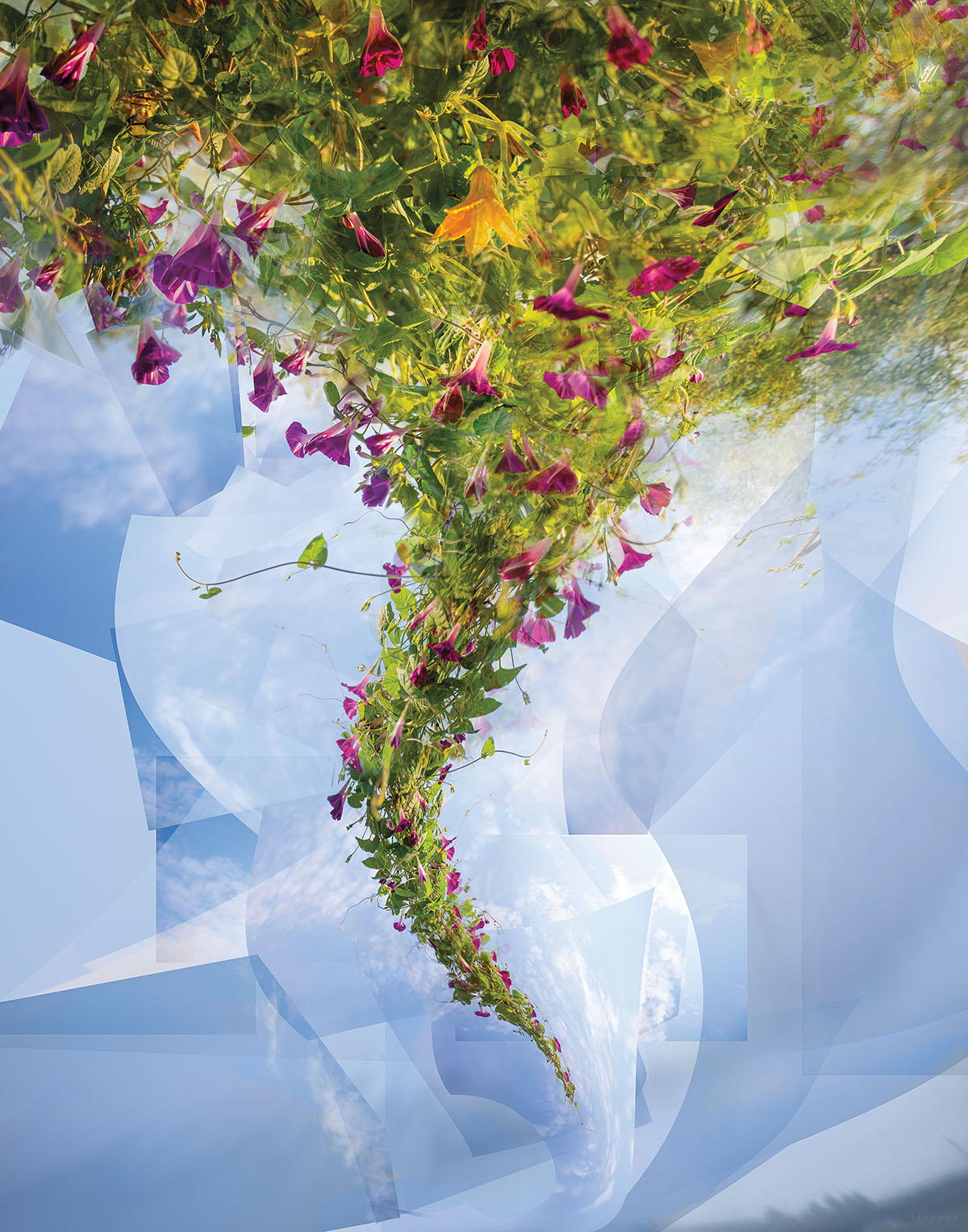 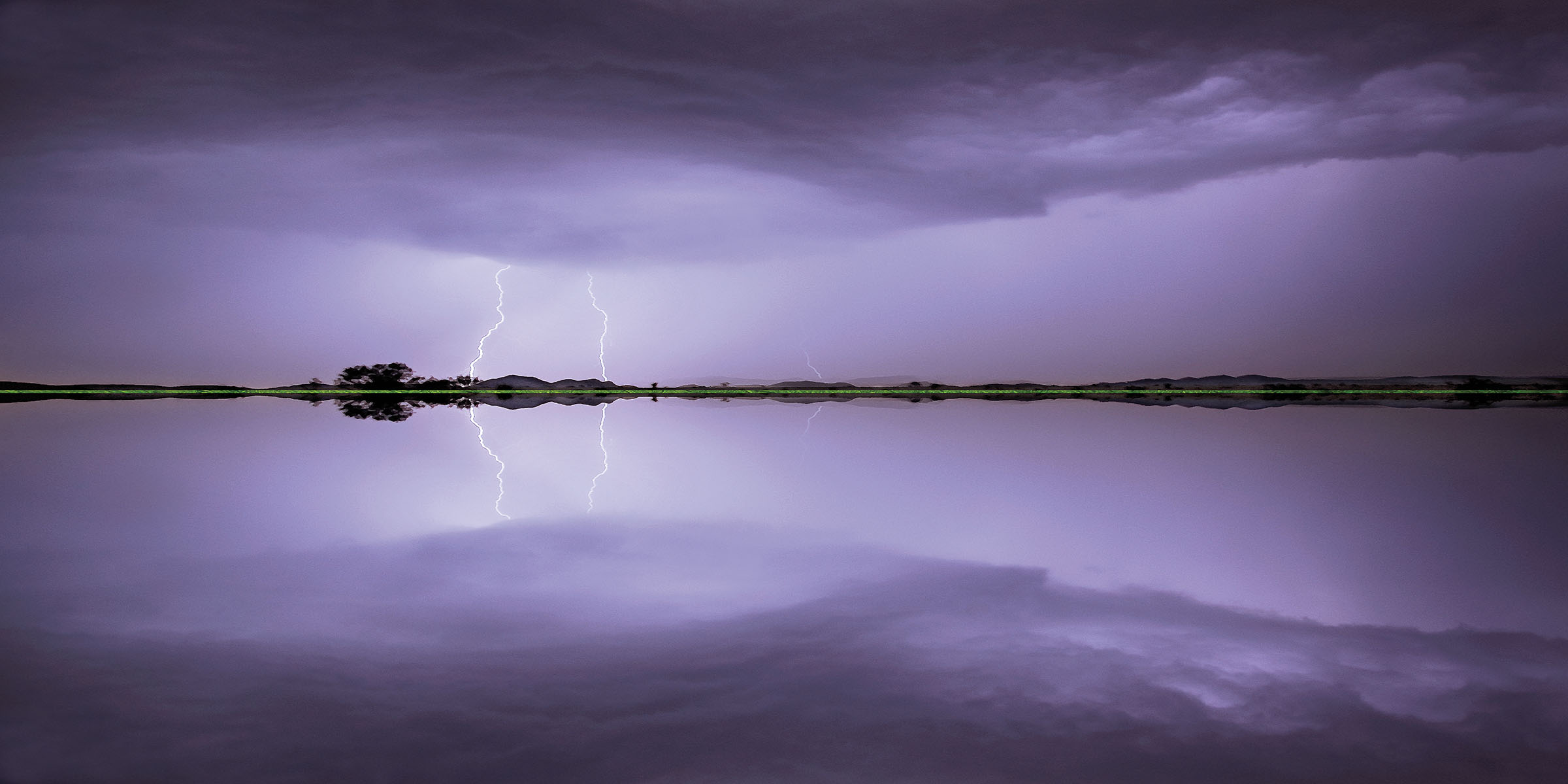 A photo composite of morning glory vines and a pumpkin vine growing on a wire trellis in Marathon; 2020.

A mirrored image of a lightning storm over the Marathon Grasslands; 2007.

A photo of a watersnake in the Nueces River near Camp Wood; 2014. 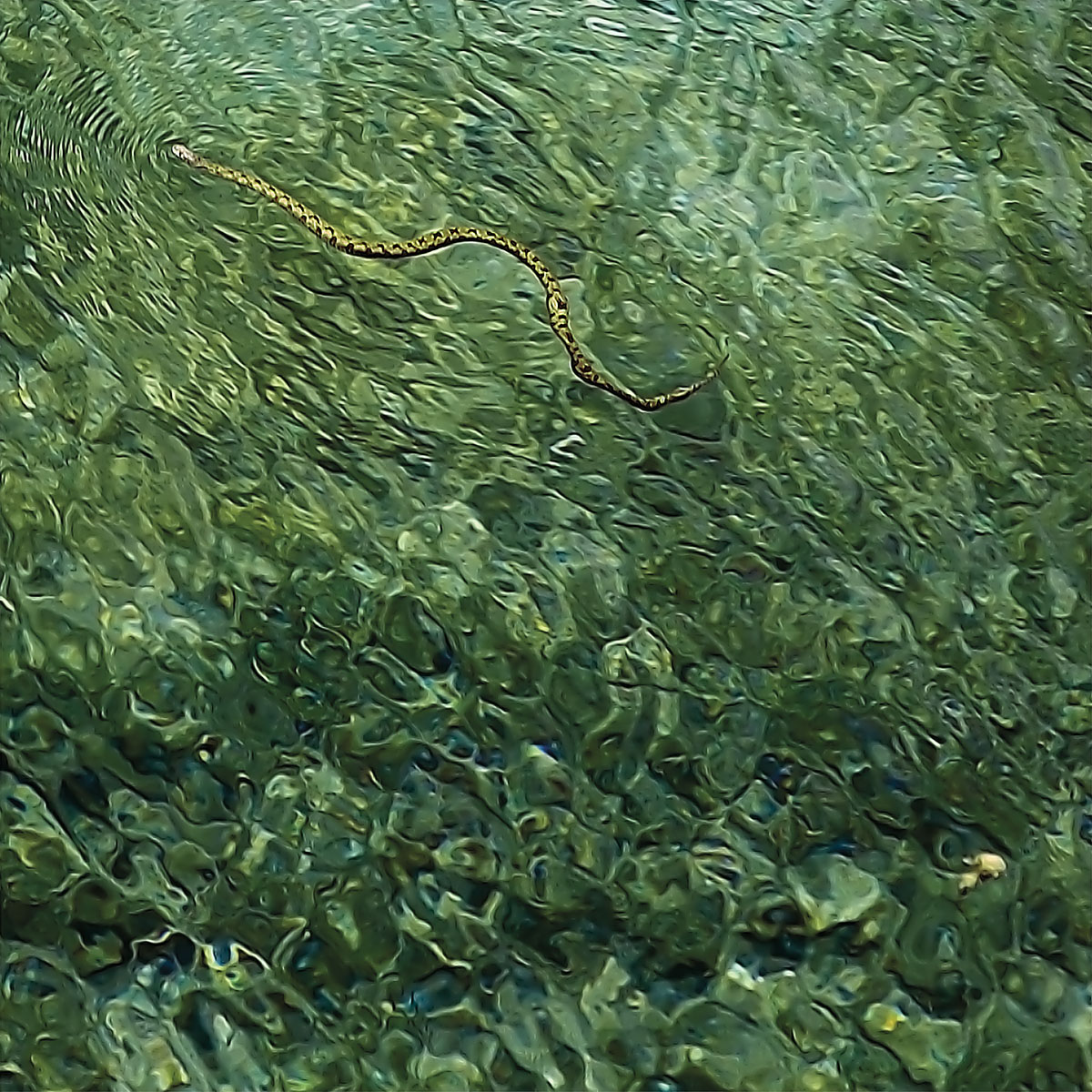 A photo composite of a dog, flowers, and flood debris at Fresno Rapids in Big Bend Ranch State Park; 2008.

Seagulls and pelicans feeding on baitfish during a thunderstorm at the Mansfield Cut at Padre Island National Seashore; 2021.

A sequence of three photos of a train on the Union Pacific Railroad crossing the Marfa Plateau; 2018.

Dust devils on a fire-scorched landscape near Valentine with the Sierra Vieja Mountains in the background; 2010. 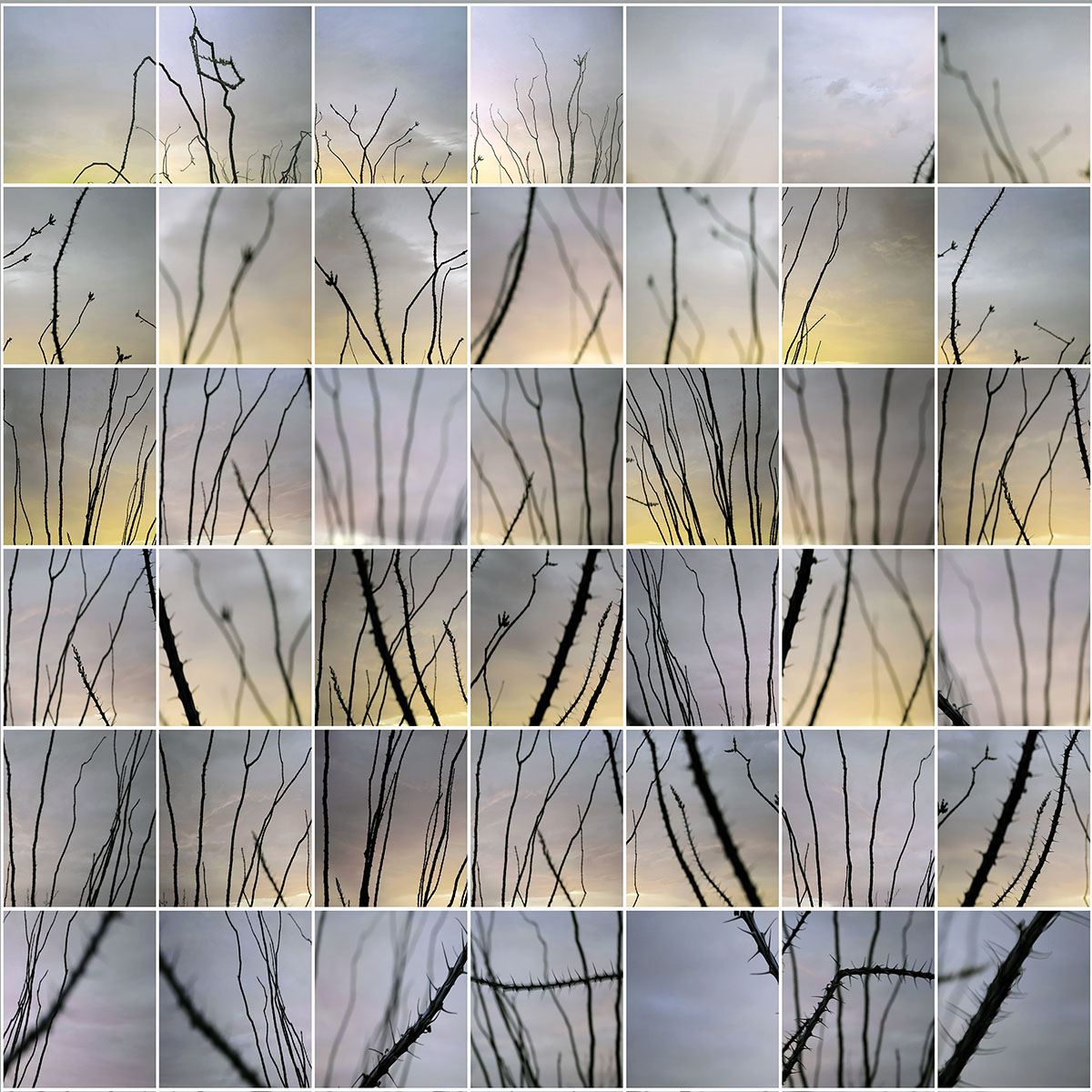 A photographic mosaic of ocotillo branches at dusk at Fresno Ranch; 2010. 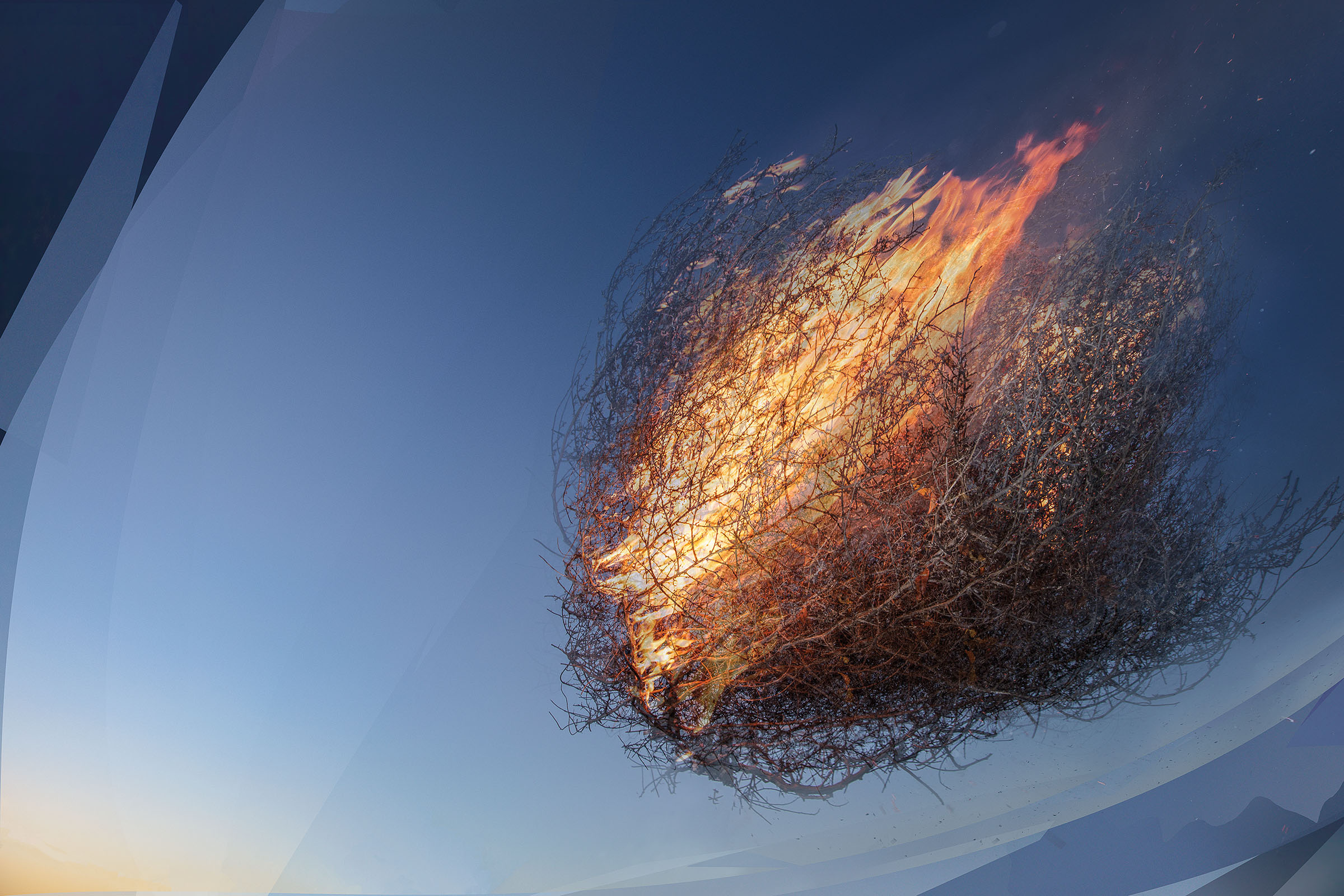 A photo composite of a burning tumbleweed in Marathon; 2021. 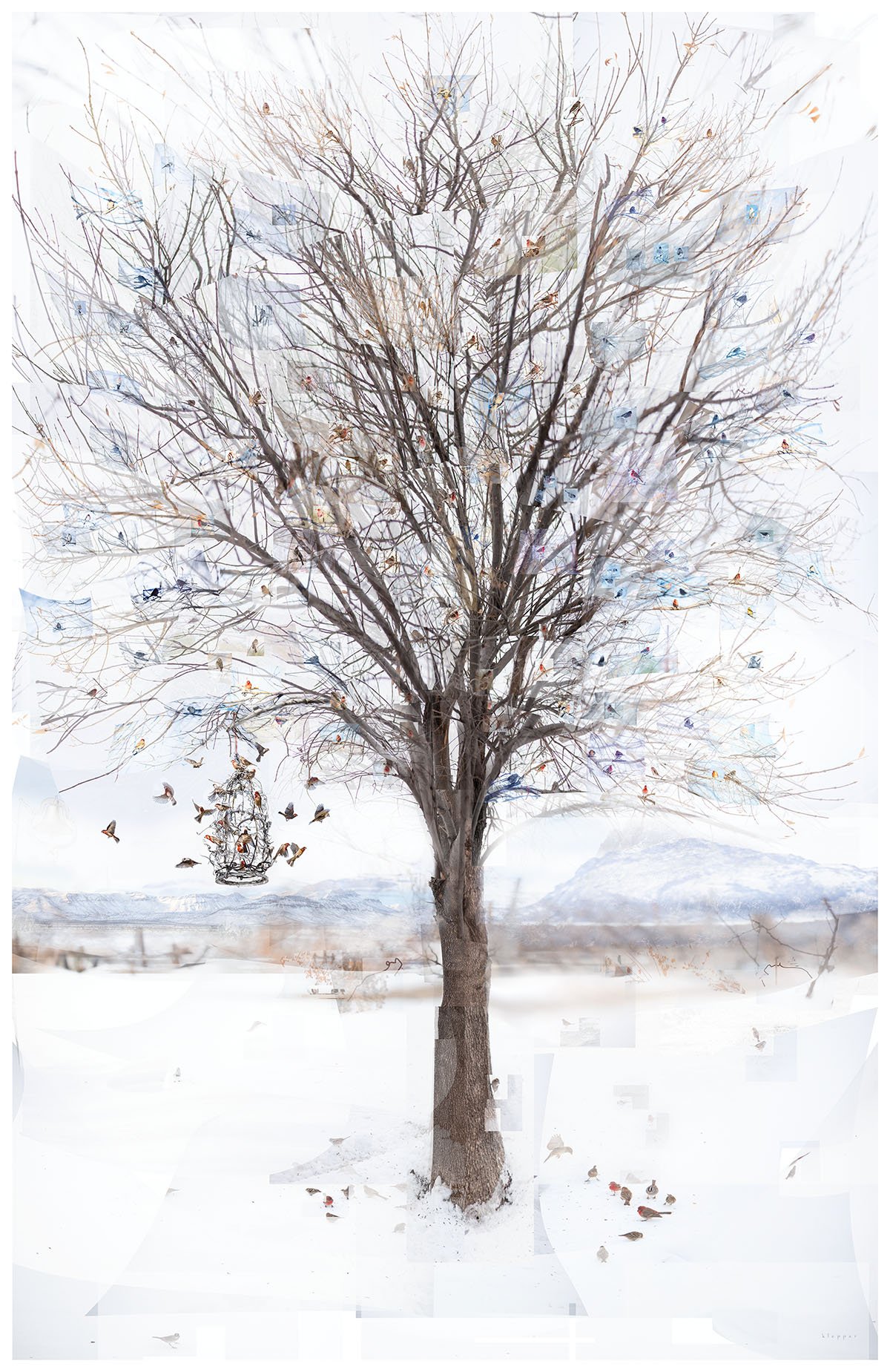 A photo composite of finches in a Fresno tree in Marathon; 2020.

A dust storm in the salt basin below Guadalupe Peak; 2016. 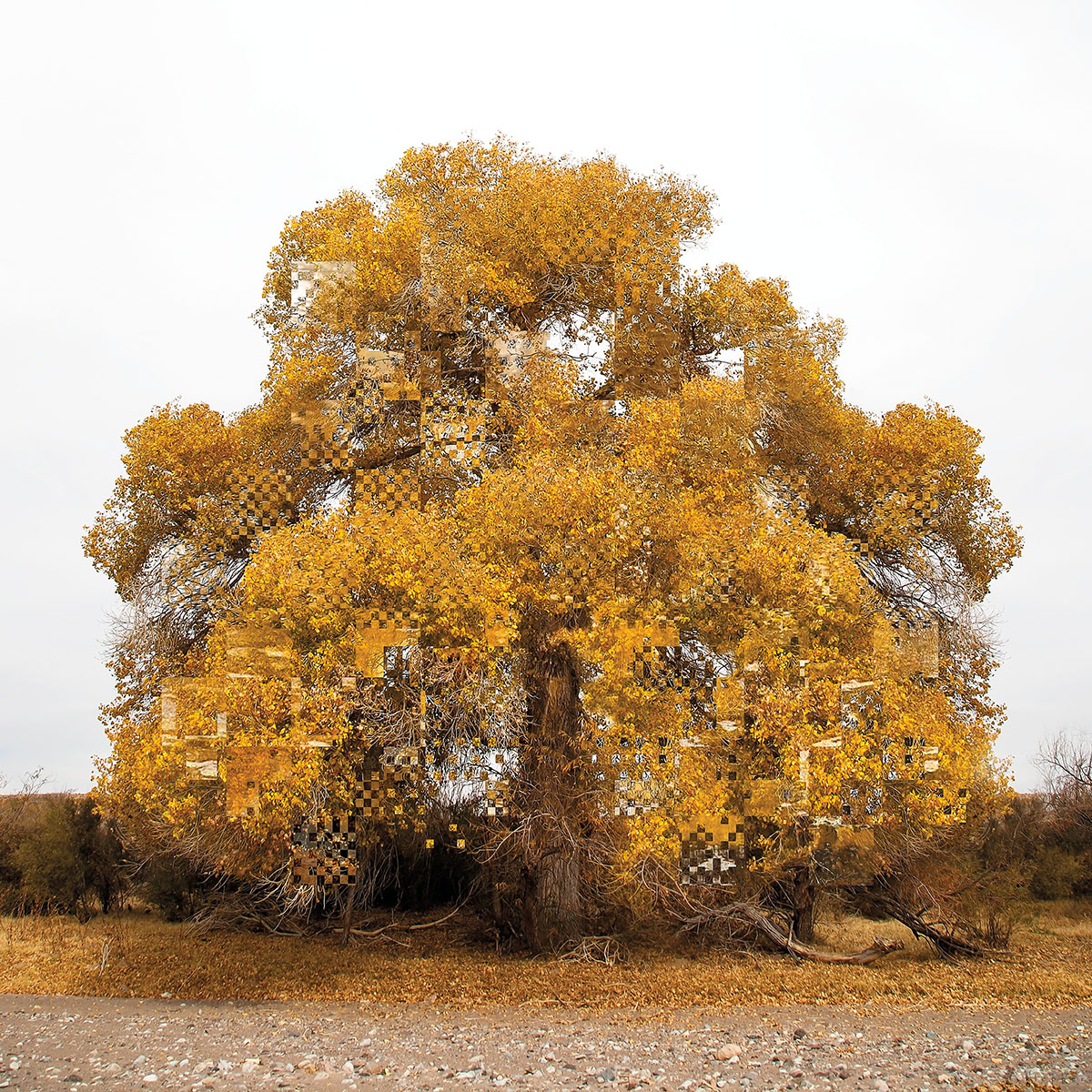 A photo composite of a cottonwood tree on Alamito Creek south of Marfa; 2020. 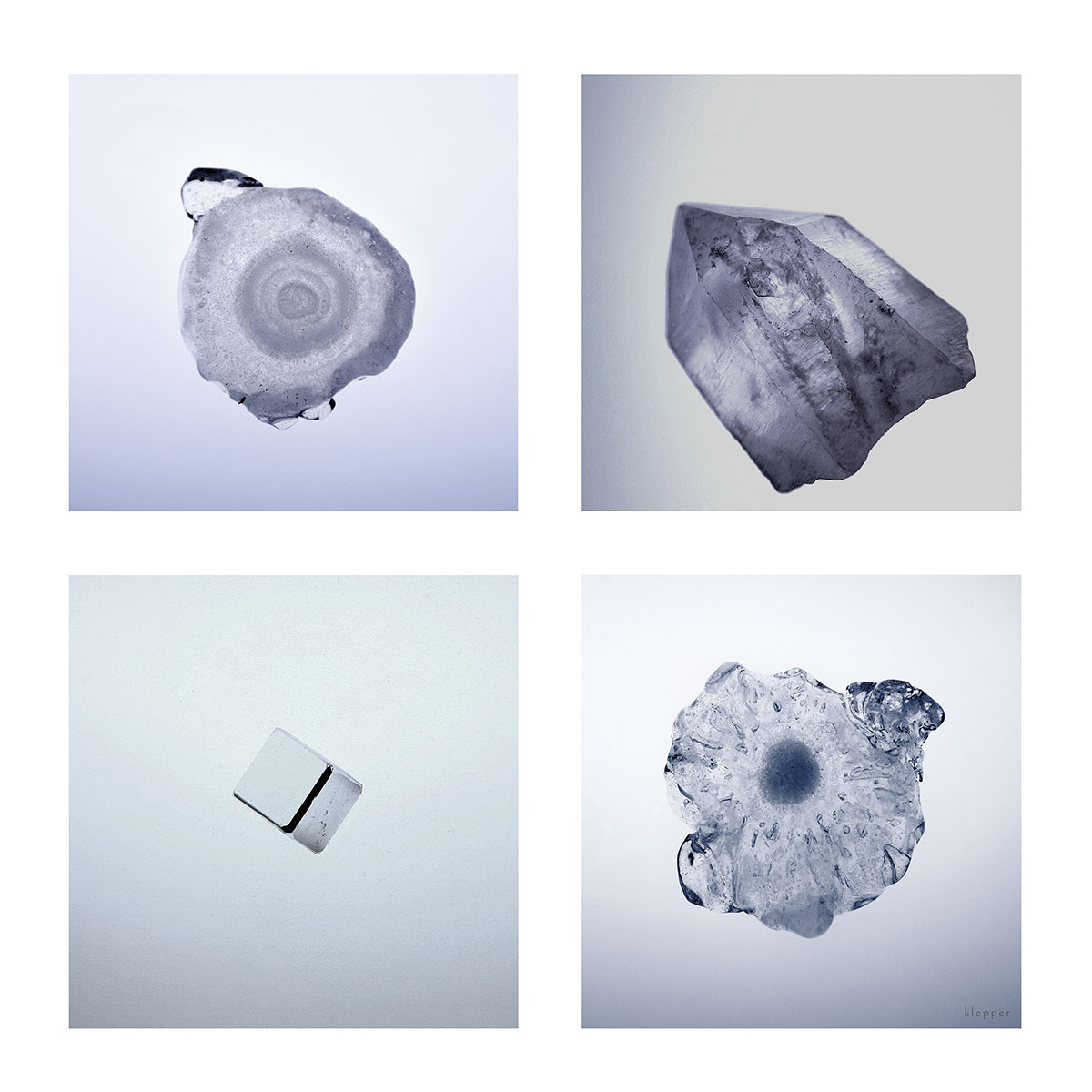 has written multiple books, including 2017’s Why the Raven Calls the Canyon, a collection of photos and prose about Fresno Ranch, a borderland expanse that’s now part of Big Bend Ranch State Park. You can see Klepper’s work at Klepper Gallery, located at 105 N. Ave. D in Marathon. The gallery is open by appointment; call 432-386-6789. Klepper is represented by Foltz Fine Art, which exhibits his work in its Houston gallery. edanklepper.com