Written by: Claudia Alarcón
Photos by: Will van Overbeek

Written by Art Williams, Photographs by Will van Overbeek | From the November 2015 issue | Updated: October 13, 2015 | Filed Under: detourTRAVEL 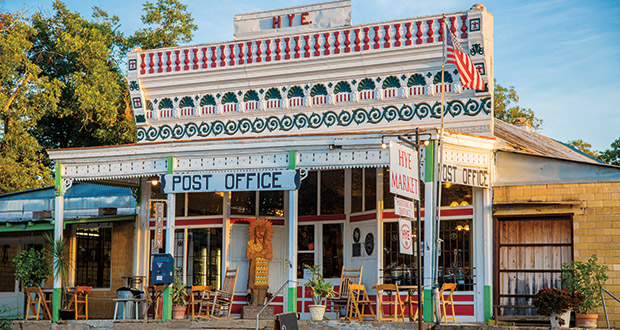 Not long ago, the tiny town of Hye was merely a curiosity for travelers between Johnson City and Fredericksburg on US 290. But a handful of entrepreneurs and winemakers are reshaping this no-stoplight community into a Hill Country destination of its own.

And the epicenter of the scene is the Hye Market Restaurant and Tasting Room, set in a historic post office building that’s been the heart of the community for generations.

Jason Cook opened the Hye Market in 2012 after purchasing the package store inside the old Hye General Store and Post Office. Working with his friend Chris Brundrett—the Chris of the nearby William Chris Vineyards—Cook transformed the space into a “restaurant, wine stop, and growler house.” Their goal is to revitalize Hye and counter the town’s drive-by punch line: Hye! Bye!

“We had a vision of branding the town of Hye as a destination, pooling our resources together, and standing behind our residents and our history,” says Cook, who arrived in Hye in 2010 to work on the launch of Compass Rose Cellars. “This historic building is the center point of Hye. That’s the reason we share the history with our guests, and we tell everyone about the businesses that are around us in Hye.”

Hye’s evolution as an epicurean attraction began in 2008, when Dan Garrison started distilling boutique bourbon at Garrison Brothers Distillery, the first legal whiskey distillery in Texas, on a 60-acre property about two miles west of the post office. Two years later, William Chris Vineyards opened within walking distance of the post office, producing wines that are widely regarded as some of the best in Texas.

The Hye Market traces its roots to 1880, when a settler named Hiram “Hye” Brown built a mercantile to serve settlers moving to the area. In 1886, Brown asked for a post office so that settlers didn’t have to make the nine-mile, daylong, horse-drawn wagon trip to Johnson City to get their mail; the new outpost took on Brown’s nickname of Hye. Brown built the structure as it stands today in 1904, and the post office within the market still operates six days a week.

Cook carefully preserved the old structure, including its original doors, pine flooring, and pressed-tin ceiling. Wrought-iron bars enclose the post office, which is federal property, so the store can sell beer and wine, like Brown did back in the day. Newspaper clippings and paraphernalia chronicling local history decorate the walls, including coverage of a visit by President Lyndon Johnson in 1965. According to the Texas historical marker on the market’s porch, Johnson mailed his first letter from the Hye post office when he was four years old; about 50 years later, President Johnson chose the little post office as the venue to swear in new Postmaster General Lawrence F. O’Brien.

The market features wines from 12 small Texas producers that use only Texas grapes and that are located in other parts of the state, including Wedding Oak in San Saba, Westcave Cellars in Round Mountain, Red Caboose in Meridian, and Flat Creek Estates in Marble Falls. On a rotating basis, the wineries come to the market each Saturday to lead tastings for the oenophiles that flock to the US 290 corridor. “‘Meet the Winery Saturday’ has really taken off for us,” Cook says. “It gives these wineries that are not on the 290 corridor a chance to be on the corridor.”

The beer selection includes craft options like Real Ale (Blanco), Revolver (Granbury), and Uncle Billy’s (Austin). The market also has three keg taps and sells growlers to-go of products like Iron Age Cider, made by Thorin’s Viking Brewery at Flat Creek Estates, and a cucumber beer from Bright Brewing in Eola. For picnic supplies, the market carries its own “Hye Market” brand of olives, pickles, pasta, and salsa, as well as La Villa bison and quail sausage from Red Rock.

In the restaurant section of the business, set in an adjoining room, chef Matt Church and his staff take orders at a deli counter that offers sandwiches and monthly specials—all built with locally sourced ingredients. Try the Whatever Sandwich—made with ham from Dutchman’s Market in Fredericksburg and a peach butter chipotle sauce from Vogel Orchard of Stonewall—or the cheese plate with Texas offerings like Santiago from the Caprino Royale dairy in Waco and Welshman from the River Whey Creamery in Schertz. After placing your order, grab a seat and participate in one of Cook’s guided tastings ($12).

Future plans for Hye’s revival include restoring the town’s shuttered dancehall, which was erected in the early 1900s by the same person who built the dancehalls at Luckenbach and Albert, Cook says. “My goal is to give that back to our community, because a lot of our community members’ parents met there,” he says. “When you walk out of the market, the front door lines up with the front door of the old dance hall. I think Hiram did it on purpose that way. I don’t know, but I’ll see him in heaven one day, and I’ll have to ask him.”