Secrets of the Sands 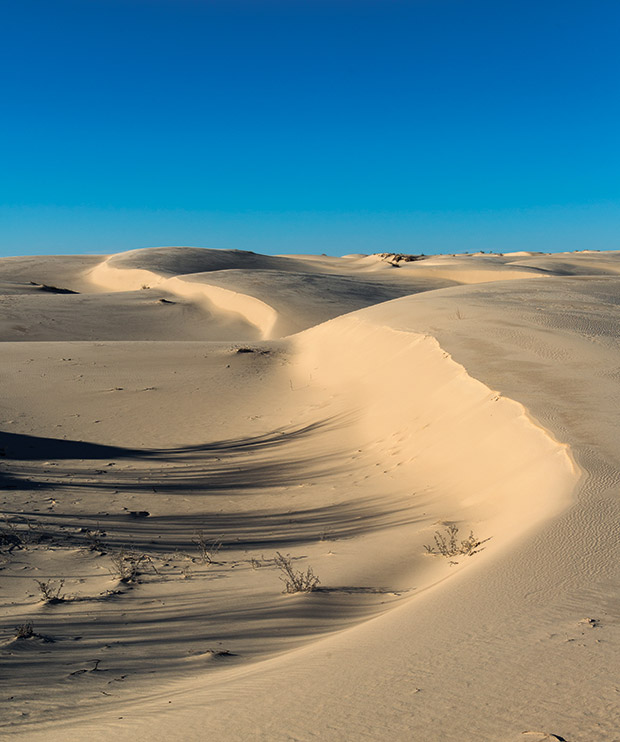 The first time I saw the Monahans sandhills, I thought I had been taken in by a mirage. What else would explain the presence of beautiful rolling dunes out here in the middle of West Texas, with no ocean within 500 miles?

The Distance to Monahans

That first trip to Monahans Sandhills State Park was a quick one, just an hourlong stop during a trip to Midland (located about 60 miles east of the park). Though it was a brief visit, the park made a big impression. I thought often of my heart-pumping slog to the top of a 30-foot mountain of sand, where I watched giddy children ride plastic toboggans down the white slopes, practically like snow sledding. And then, of course, there was the thrill of running down a dune at full tilt, collapsing into a sandy mess at the bottom.

The postcards in the park’s gift shop also revealed a different, calmer side of the dunes. They captured sunsets and sunrises that bathed the dunes in gorgeous colors, intensified by the broad expanse of pale sand. Intrigued by the images, I resolved to return to the park for an overnight camping excursion so I could see those colors first-hand.

Sand blurred the edges of the park road as my traveling companion and I drove past the visitor center to our campsite. After we parked and got situated, I set out for a quick initial exploration of the nearby dunes. It was a useful reminder that while the dunes look uniform from a distance, up-close, the sand reveals many different shades and textures. I took my shoes off to better appreciate the distinction between the tawny, crunchy sand and the white, powder-soft kind.

There’s another benefit to spending more time at the park: It allows for a deeper exploration of the informative displays that explain how this environmental anomaly came to exist. The visitor center museum delves into the park’s natural and cultural history, while a quarter-mile interpretive hiking trail behind the center is lined with placards explaining the park’s plants. It turns out that the grains of sand that make up the Monahans dunes are remnants from New Mexico’s Rocky Mountains, eroded by the Pecos River more than 40,000 years ago. The sand settled in flood plains in southern New Mexico, anchored in place by plants until the end of the most recent Ice Age, when a warmer, drier climate killed off much of the plant cover. The sand, exposed to winds, spread southeast toward Monahans. Today, the state park protects a 3,840-acre section of a dune field that stretches 200 miles across Texas and into New Mexico.

The sandhills in the state park reflect nature in careful, balanced flux. Throughout the year, the dunes change shape with the prevailing winds. During rainstorms, the dunes act like a giant sponge, absorbing rainwater and preventing it from evaporating. In places where a layer of hard ground—known as caliche—forms, the rainwater gathers into temporary ponds, providing a water source for thirsty desert animals. People, too, have been coming to the sand dunes for thousands of years, digging beneath the sand to find fresh water.

The park is also home to part of one of the world’s largest forests of shin oak trees, which in total covers about 40,000 acres. This unusual oak forest may surprise you—the trees are only a few feet tall, looking more like desert shrubs than the sprawling oaks found elsewhere. But shin oaks are quite impressive—the small trees have massive root systems that stretch up to 70 feet beneath the sand. The oaks’ root systems help stabilize the dunes, while their acorns provide nutrition for wood rats, ground squirrels, kangaroo rats, and other wildlife. 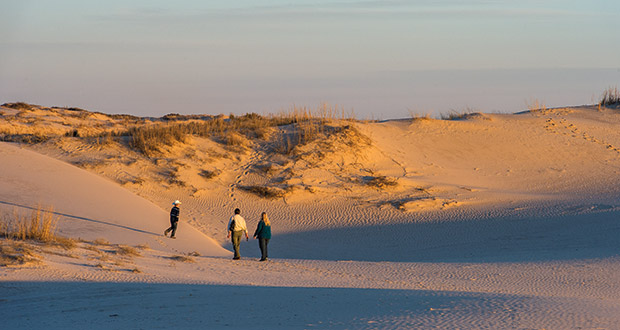 As I explored the park, I discovered that the reflective properties of all that sand, combined with the hot afternoon sun, can be a little overwhelming. In search of a reprieve, I made the seven-mile drive to the Million Barrel Museum in Monahans. Due to its name, I’d always assumed that the Million Barrel Museum was all about oil, but as Curator Julene Barlow walked me around the exhibits, I learned that the museum covers a broad swath of local history. Visitors can explore Monahans’ original 1928 jailhouse, a wooden structure not much bigger than a closet, and walk through decommissioned rail cars. One extensive exhibit centers on the World War II air base in nearby Pyote. The display features old letters, airplane parts, uniforms, and a number of other objects that evoke the World War II era.

The highlight of the Million Barrel Museum, however, is the eight-acre, bowl-shaped reservoir that was constructed during the 1928 oil boom with the idea that it would hold—you guessed it—a million barrels of oil. Unfortunately, it wasn’t as seamless as it looked; oil leaked and evaporated from the reservoir, prompting developers to abandon the experiment. Then, Barlow explained, in the 1950s, a big-dreaming entrepreneur filled the hole up with water, hoping to turn it into a West Texas recreation destination for boaters and water-skiers. Unfortunately, the reservoir held water about as well as it held oil; soon, that plan was abandoned, too.

I made sure to return to the park in time to witness the sun setting over the dunes. A dozen or so people were doing the same thing. In one of the picnic areas, a family took advantage of the strong sunset breeze to fly kites. Sever-al couples had staked their claims on different dunes in order to appreciate the romance of the moment. I scrambled to the top of an unoccupied dune just as the sun began to sink below the horizon. The sun flashed orange and the dunes took on an eerie, unexpected shade of green.

While campfires aren’t permitted at Monahans Sandhills State Park, overnight campers can cook a meal in the on-site barbecue grills. (All campsites are also equipped with water and electric hookups.) But my traveling companion and I opted to drive back into Monahans for dinner at the Jazz Café. The restaurant, which opened in 2013, occupies a large, high-ceilinged building that dates to 1937. As jazz music played over the speakers, our server told us that over the years, the building has been a movie theater, an auto-parts store, and even a gymnasium. “I used to take gymnastics classes here,” she said, laughing. In its current incarnation, the Jazz Café offers lunch and dinner with daily specials ranging from chicken-and-dumplings to spicy chicken-and-bacon pasta and rib-eye steaks, along with sandwiches, salads, and irresistible desserts, including a tasty pretzel-crusted brownie.

Back at the park, we set up the tent, thankful that the day’s strong breeze had finally died down. In the darkness, it was easy to understand why the West Texas skies are so popular with stargazers; the multitude of shining stars made it hard to identify individual constellations. Instead, we just sat back and appreciated the entirety of the vast, spangled night sky.

Maybe it was all the sand dune-inspired exertion, or maybe it was my full belly, but I slept peacefully and dreamlessly all night. When I awoke, the sun was just starting to rise. I wriggled out of my sleeping bag and walked into the dunes. The first gusts of wind whisked through the low desert plants and ruffled the small, delicate tracks left behind by nocturnal critters. After a chilly night, the sand felt cool on my bare feet. I found myself a comfortable place and sat quietly, watching the desert wake up.