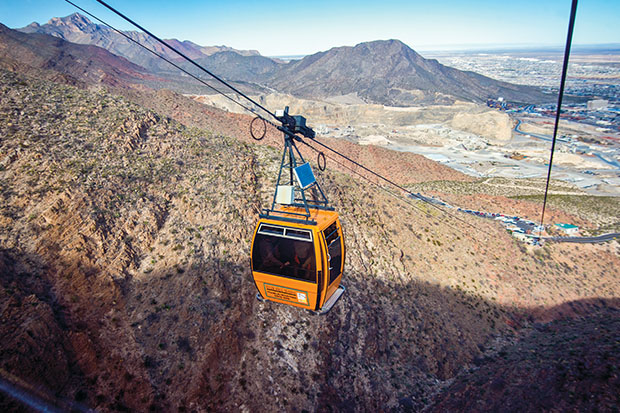 On the western edge of Texas, you’ll find the only place in the state that provides a bird’s-eye view of 7,000 square miles spanning three states and two countries.

And though some people opt to hike to the top of 5,632-foot Ranger Peak in Franklin Mountains State Park, I prefer to ride in one of the bright orange cable cars of the Wyler Aerial Tramway.

The trip starts with a drive up the side of the eastern face of the Franklin Mountains to the tramway’s base station—about 1,000 feet above El Paso—where visitors can see the machinery that stops, rotates, and reverses the cars on their cables. As a park ranger holds open the gondola door, the car sways slightly as each passenger steps inside. With a light swing, the gondola starts and we’re on our way.

The tramway climbs more than 900 feet in elevation during the four-minute ride, occasionally gliding over canyons 200 feet deep. Below, the mountainside falls away as the cable car ascends, whisking passengers above rocky outcroppings, where Chihuahuan Desert flora like sotol and lechuguilla speckle the jagged brown slopes. On the rare days when it rains in the Sun City, water snakes down the mountain and collects in crevices protected from the desert sun. The pools draw various critters, and tramway riders sometimes spot mule deer, squirrels, and hawks.

As the gondola climbs, two red-and-white communication towers at the top of Ranger Peak grow larger. This uniquely El Pasoan attraction traces its roots to those towers. Local news station KTSM Radio built the tramway in 1959 to service the construction of a transmitter antenna and service platform on Ranger Peak.

“They built a tramway since there is no road to go up the mountain,” Park Ranger Diana Moy explains. “It was going to be the easier way to transport both equipment and technicians to come and work on the towers. So the tramway was never intended to be a public attraction. But because of the view at the top, they decided to open it to the public.”

Broadcasting businessman Karl O. Wyler Sr., who oversaw the construction of the tramway, opened the ride to visitors in 1960 as the El Paso Aerial Tramway, making it the first public tramway in Texas and only the third in the nation. In 1986, the tramway closed to the public but remained in use by tower workers and technicians. As part of his will, Wyler donated the tramway and the nearly 200 acres surrounding it to the Texas Parks and Wildlife Department. The state accepted the donation in 1997, and after considerable renovations, the tramway reopened to the public in 2001 as Wyler Aerial Tramway.

A massive cable—1 3/8 inches thick and 2,600 feet long—delivers our gondola to the Ranger Peak mountaintop station with a soft bump. As we step into the mountain air, I notice the summit is significantly windier than the base. On the west side of the summit, where there are no mountains blocking the wind, the gusts are even stronger. The summit is also cooler. On warm days, the 5- to 10-degree temperature drop is a welcome relief from the desert heat. But visitors should be prepared during the fall and winter, when the windy cold can be a teeth-chattering, hair-tousling surprise. 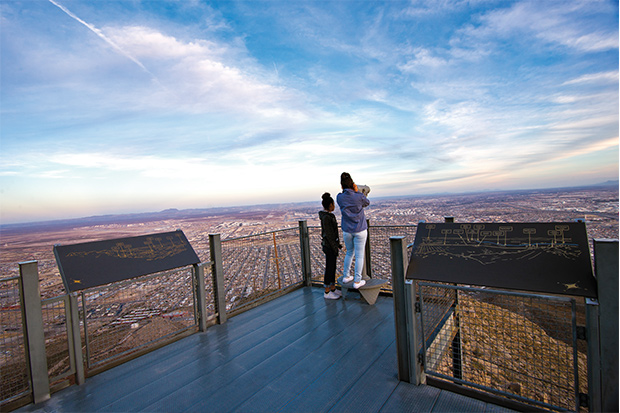 The tramway’s four-minute ascent climbs more than 900 feet to the 5,632-foot summit of Ranger Peak.

On the viewing platform—looking out from the southernmost tip of the Rocky Mountains—informative signs in English and Spanish interpret the 360-degree view with markers outlining various landmarks like Fort Bliss and El Paso International Airport.

Interstate 10 runs through the middle of El Paso before its thin line seemingly disappears to the east. From this distance, the Rio Grande looks more like a dirt road than a concrete riverbed. Across the border in Juárez, the nearly 200-foot tall monument La Equis—a massive X shape—might be easy to overlook if not for its bright red paint that stands out against the desert surroundings. From the peak, it’s difficult to distinguish where the United States ends and Mexico begins—fitting, as for part of their history, El Paso and Juárez were one settlement known as El Paso del Norte. Today, three international bridges connect the two cities, and depending on the day, the Ranger Peak view reveals lengthy cross-border traffic backups.

Ranger Peak also overlooks El Paso, where buildings more than a century old anchor a downtown rich in both historic charm and bustling cultural energy. Among the historic and modern buildings, a green dot signals a relatively new addition to the skyline: Southwest University Park, home of the Triple-A El Paso Chihuahuas minor league baseball team, opened in 2014. The stadium nestles so tightly within the downtown streets that during the season, you can drive behind the outfield and catch a glimpse of the ball game.

Ranger Peak’s offerings also include benches for relaxing, powerful telescopes that cost 25 cents to operate, and a small gift shop with snacks, T-shirts, hats, and other tramway souvenirs. The park built the shop around one of the communication tower’s base legs—evidence that Wyler Aerial Tramway wasn’t originally intended for public use.

Thankfully, Mr. Wyler and the Texas Parks and Wildlife Department saw the benefit of opening this view to the public. And yet, Moy says that every weekend at least one passenger panics while inside the gondola as it’s suspended above the mountainside. Park rangers do their best to calm any nervous guests. “We just try to distract them,” Moy says, “talk to them about something else.” Those squeamish of heights may find comfort in knowing the view from Ranger Peak makes those few anxious minutes well worth the ride.