Architecture emerges from the landscape as naturally as Ocotillo and Agave 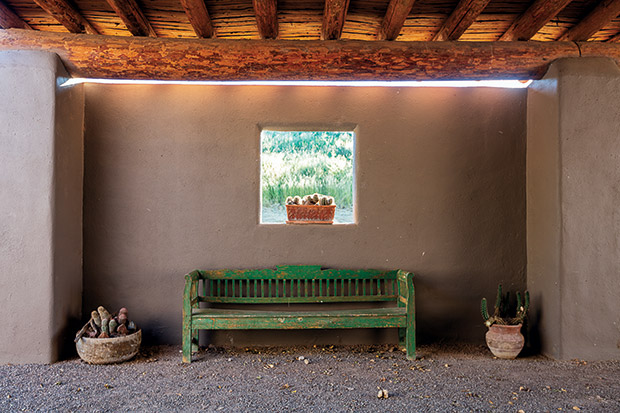 Few things evoke the romance of the Old Southwest more than adobe. Houses made of earth seem timeless, older than the river that flows between Texas and Mexico. They appear to have simply emerged from the landscape as naturally as ocotillo and agave.

More on Texas adobes at www.texashighways.com/webextra.

According to archeologists with the Texas Historical Commission, indigenous Texas cultures used adobe to create shelters as early as 700 A.D. Centuries later, Apache and Jumano adobe traditions influenced construction techniques in Texas, as did the adobe architectural styles of Pueblo Indians, Spaniards, and Mexicans. Even the original Alamo church in San Antonio was constructed of adobe bricks—a mixture of mud, water, and grass or straw formed in molds and dried in the sun—before the present stone structure was begun in the 1740s.

Adobe structures fare best in drier climates, so most of Texas’ earthen architecture was built south and west of San Antonio (and of course, in the Alamo City itself) and in the Panhandle. The dried mud bricks were used to build not only homes, but also churches, saloons, hotels, forts, schools, stagecoach stops, jails, and courthouses. Especially in far West Texas, where adobe construction was common, adobe ruins adorn the terrain, as the earthen walls slowly tumble back to their origins within the soil.

Many historic adobes have been carefully restored, though. Archeological investigations conducted by an Illinois State University field school in the late 1960s and by Texas Parks and Wildlife Department archeologists in the early 1970s guided restoration at Fort Leaton, near Presidio on the Rio Grande. Historians say construction at the site probably began in the 1830s. Regarded as Texas’ largest extant adobe structure, the fort—with 31 rooms and walls ranging from 18 inches to 44 inches thick—opened to the public in 1978 as the Fort Leaton State Historic Site. 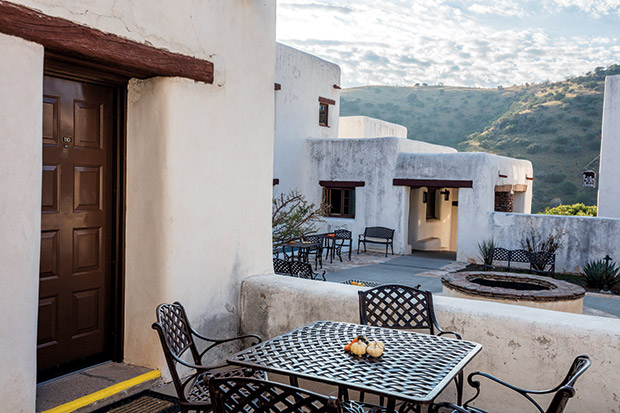 indian lodge, Davis Mountains State Park: Built by the Civilian Conservation Corps in the mid-1930s, the original 16 rooms of the Pueblo-style lodge have adobe walls a foot-and-a-half thick. Pine crossbeams in the rooms were harvested locally, and the ceilings were made from Rio Grande reeds. www.tpwd.texas.gov/state-parks/indian-lodge.

Several adobes still stand at Fort Davis National Historic Site in the Davis Mountains, including the 1867 Enlisted Men’s Barracks, the 1880s Officer’s Quarters, and the 1878 Chapel. The barracks adobe is whitewashed with a lime compound, while the two-story Officer’s Quarters remain bare adobe. Only one wall of the Chapel still stands.

“The Chapel was the social center of the fort, hosting weddings, plays, and concerts,” explains Fort Davis National Historic Site Superintendent John Morlock. “The adobes at Fort Davis contain no straw but are made of earth, sand, and natural cement, a non-hydraulic type of cement made by heating lime rock to break it down into a powder. Another interesting feature here is that the plaster applied to the adobe in the Chapel was found to contain horsehair.”

Seen as hovels fostering poor hygiene and as stumbling blocks to progress, many adobes were torn down in the late 1800s and replaced with structures of brick, concrete, wood, and stone, especially after far-flung locales like El Paso were connected by rail. “The removal of the ancient adobe with all their bad associations means a new life for El Paso,” editorialized the El Paso Times in 1883. While dispatched to the border to deal with Pancho Villa, General John J. Pershing’s troops are said to have assisted El Paso authorities in demolishing “germ-infested” adobe homes in El Paso’s Chihuahuita neighborhood. At some point, demolition teams encountered fire from Chihuahuita snipers. Other communities also banished adobe construction.

Those perspectives are a thing of the past, though, and today even the high-toned art world embraces adobe. Prada Marfa, an avant-garde artwork constructed of adobe by artists Michael Elmgreen and Ingar Dragset in 2005, sits on US 90 near Valentine. The 15-by-25-foot sculpture of an upscale Prada shop is complete with handbags and shoes displayed inside. 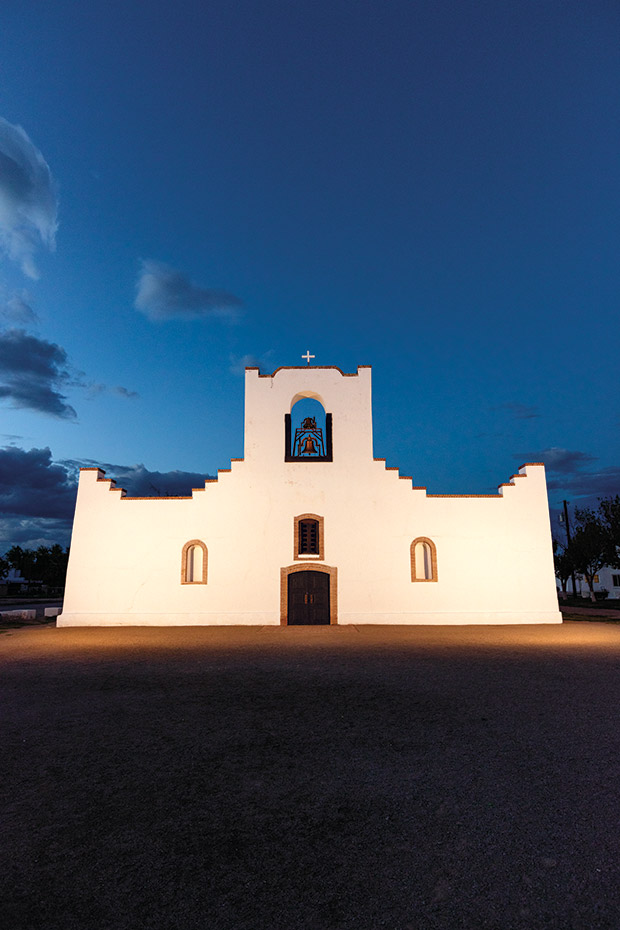 Socorro Mission, just east of El Paso: Along with adobe chapels in Ysleta and San Elizario, Socorro Mission forms the Mission Trail on Socorro Road. The current structure was completed in the 1840s, replacing two earlier chapels, the first dedicated in the 1690s, that were swept away by the flooding Rio Grande. www.visitelpasomissiontrail.com.

Adobe is more popular than ever in the art mecca of Marfa. A 19th-Century fixer-upper was recently offered for $162,000, while a 680-square-foot adobe home, advertised as “just about the last bargain left in Marfa,” was on the market at $65,000. From there, sale prices ran all the way up to a 100-year-old adobe dance hall “transformed into a serene minimalist Modern home” priced at $895,000.

Adobe enthusiast Simone Swan, a former director of Houston’s Menil Foundation, moved to the outskirts of Presidio in the 1990s after discovering nearby Fort Leaton during a Big Bend vacation and later assisted its ongoing restoration. She built an adobe hacienda with Nubian vaults and founded the nonprofit Adobe Alliance, with an educational program active on both sides of the Rio Grande.

Swan studied and apprenticed in Cairo with master adobe architect Hassan Fathy, who is credited with rediscovering the Nubian vault technique, and points out in her writings that “the English word adobe comes from the Spanish assimilation of al-tub, Arabic for sun-dried bricks of mud.” Whenever someone expresses pessimism about the permanence of adobe construction, she displays images of Middle Eastern structures and retorts, “Well, these have lasted for 3,000 years.”

Let’s visit some more “adobe haciendas” from McAllen, down in the Rio Grande Valley, to El Paso on Texas’ western edge.

Annie Riggs Memorial Museum, Fort Stockton
Built in the early 1900s in the Territorial style, a mixture of Pueblo and Victorian architectural styles, the museum originally served as a hotel. Locals say the adobe bricks have held up well with only minor maintenance, partly due to the walls’ protection by an overhanging porch roof.

Magoffin Home State Historic Site, El Paso
The 1875 Territorial-style home was built by Joseph Magoffin, a four-term mayor of El Paso. A 2011 restoration revealed that the two- to three-foot-thick adobe walls also extended about two feet into the ground, making it difficult to distinguish between the earth and the structure’s foundation.

Fort Leaton State Historic Site, Presidio
The mid-19th Century trading post and private fort of Ben Leaton was long believed to be built on the ruins of an 18th-Century Spanish mission and presidio. But recent archeological work places the earliest human occupation at the site in the 1820s.

Quinta Mazatlan, McAllen
The 1930s adobe hacienda was built by eccentric adventurer Jason Matthews, who is said to have coated the walls with aluminum sulphate paint to prevent radar waves from penetrating his home. Today, Quinta Mazatlan is one of nine World Birding Center sites in the Rio Grande Valley.