Smithville the next Marfa?

Written by Lois Rodriguez, Photographs by Will van Overbeek | From the August 2017 issue | Updated: July 18, 2017 | Filed Under: TRAVEL 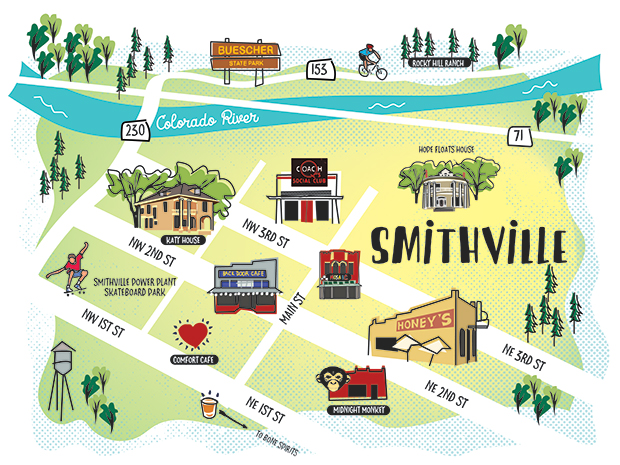 Steve Simmons and his wife, Amy, the Austin ice cream queen, bought a ranch in the Smithville area 10 years ago to get away from the hustle. But a Saturday in early 2014 inspired Steve to get to work instead. He and his family had dinner that night at the Back Door Café, Smithville’s fine dining establishment, then walked onto the Main Street of a ghost town. “We’d just had a great meal, and the downtown buildings looked beautiful against the sky,” Simmons recalls. “Where are all the people?” his 10-year-old son asked. It did seem strange to Simmons that there wasn’t anyone else on the streets that once bustled when the town was a railroad hub. “Dad, you could fix this,” were the words that sent the father into action.

For Smithville visitor information, call the Smithville Area Chamber of Commerce at 512-237-2313.

Simmons bought a couple of buildings downtown and recruited friends and associates to also invest in this quaint burg 45 miles east of Austin and 120 miles west of Houston. Then he sold his vision of Smithville’s downtown revival to city leaders with a talk at the library.

Three years later, Smithville (population 4,218) struts with a vibrancy it hasn’t seen since the late 1980s, when the road between Austin and Houston went right through the center of town. Once deathly quiet after dark, save for the blaring horns of passing locomotives, downtown now has an upscale pizzeria, a sports bar, a community theater, an eclectic boutique, a wine bar, and occasional concerts on the second floor of the Mosaic Art & Home shop.

Smithville is fast becoming Austin’s Marfa, a daytrip destination that doesn’t take all day to get there.

At the storefront at 303 Main St. that once housed the Smithville Times weekly newspaper, you’ll find Coach Q’s Social Club. Simmons bought the 1930s building and teamed with former Smithville High track coach Tony Quitta—recently retired after 29 years helming the Tigers—to open a sports bar for the whole family. The club, decorated with Smithville sports memorabilia, received a vintage transplant when Simmons and Quitta bought the contents of a St. Louis bar called the Mahogany Room, which had been in storage for 55 years. Included in the sale was a gold cash register that gets almost as many oohs and aahs as the sports action unfolding on eight TV screens.

Coach Q’s has the best cheeseburgers in town, though fans of Pocket’s Grille (205 Fawcett St.), whose varied menu includes such burger concoctions as the El Hefe (grilled onions and jalapeños, topped with a fried egg) and the Alpine (mushrooms and Swiss cheese), might disagree.

The top food necessity for any small Texas town that wants to put itself on the map is a good barbecue joint, and Smithville has one of the best in Zimmerhanzel’s BBQ. But when you add a great pizza restaurant like Honey’s, plus the consistently good Olde World Bakery and Café on Main Street, and soul food trailer Auzell’s Kitchen on the North Third Thoroughfare, you’re state champs in 1A culinary options.

And joining the culinary crowd this fall is Micklethwaite Craft Meats, the Austin-trailer sensation moving into the former Vasek Automotive building. Also across the street from Honey’s/Amy’s is the fabulous Midnight Monkey Merchantile & Services, bringing a taste of Austin’s SoCo shopping district to Southeast Second Street. With the Pine Hotel Lofts coming next door to Honey’s in 2018, that block is the hippest in Bastrop County.

“Smithville is a little treasure,” says Robin Kelley, who opened Midnight Monkey with cousin Beth Neely in the fall of 2016. “This town inspires you to create.”

If you’re working hard to add something special to the community, you’re “smithing,” a term Kelley invented, which is starting to catch on. 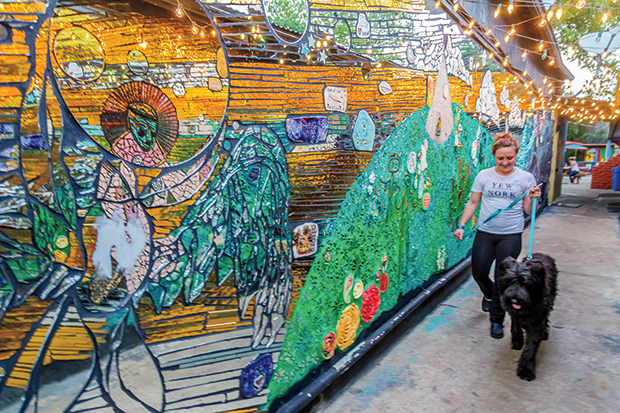 Both progressive and traditional, Smithville has had a recycling center since the 1980s. But the Smitty City is still without a movie theater, public swimming pool, greengrocer, regular live music venue, or an ethnic restaurant besides Mexican. All that can be found less than an hour away in Austin.

What the capital city doesn’t have is a nourishment experience like the Comfort Café, a pay-what-you-can restaurant staffed by the SerenityStar Recovery group, which serves omelets of a higher taste. That everything on the menu is fantastic and being served by good folks trying to put their lives back together will make you pay $20 when no one would look down on you if you left the minimum of $10.

Though the café is open only Friday through Sunday until 3 p.m., folks often stop by early in the week to admire Stefanie Distefano’s outdoor mosaic mural Journey of the Soul, with inscriptions and inspiration coming from those in treatment who shared their stories.

“You know those days when the sky is pure blue and the birds are singing and the sun feels so right on your face?” Distefano asks. “That’s how every day feels since we moved to Smithville [two years ago].” Her favorite thing to do is ride her horse downtown or over to West End Park, a former “Chitlin’ Circuit” nightclub of the ’40s and ’50s that is seeing a slow revival under the spiritual leadership of Smithville’s resident jazz composer Hannibal Lokumbe.

There are outdoor activities in the area for those who don’t have a horse, including those at Buescher State Park, only 3 miles from the center of town. It’s great for hiking, fishing, camping, birdwatching, and just getting away, as you can have the park almost all to yourself on weekdays.

Smithville also has a Tony Hawk-subsidized skateboard park downtown, plus disc golf, pier-fishing on the Colorado River, and 100-year-old oak trees in Riverbend Park, the site of the annual Jamboree each April. But perhaps the best exercise of all is walking through the historic district of old, beautifully kept houses, including the one at 235 NE Eighth St., where the Sandra Bullock character lived with her mother in Hope Floats. The titular Tree of Life, which filmmaker Terrence Malick had moved and replanted at great expense, is just a few blocks away at 709 Burleson St.

Filmmakers have long seen Smithville as a lovely location for both period pieces and slices of small-town life, with its Victorian houses, antiques stores, art deco post office, and only two chain restaurants in town: Dairy Queen and Subway. But, aside from Friday night football games at Barry Field, there wasn’t much human electricity. Until recently, Huebel’s beer joint, which plays big in Hope Floats, and Charlie’s, a friendly, smoke-filled biker/karaoke bar, were the only places to wet your whistle after dark. But now Smithville’s even got a distillery and tasting room, Bone Spirits on Northeast First Street. And Coach Q’s keeps it lively on Main Street.

Midnight Monkey, which has an innovative concept for a store in the boonies, could not have opened in Smithville five years ago. You enter the shop—whose items range from a $1.50 pack of candy cigarettes to a pair of $3,000 chairs designed by the Swiss-French architect Le Corbusier—through a “storyfront,” not a storefront. And once every four months or so, the store changes inventory completely, introducing the goods with a midnight “new story” party.

Store owners cover its windows in brown paper as they store the old merchandise and put new items in place. “We didn’t know what we’d see when we took down the paper at midnight,” Kelley says of the November 2016 unveiling. “We thought maybe no one would be outside. But when we tore it down, there must’ve been 100 people. It turned into a huge block party!”

Folks dancing in the downtown streets of Smithville at midnight! The overall pace is still small-town, but now it pulses with fresh blood and new ideas.