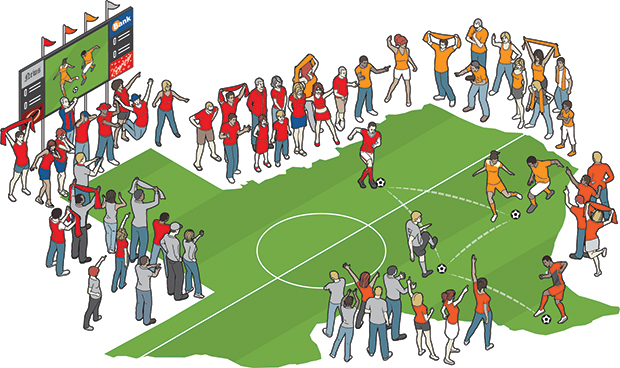 I experienced 10 of the most exciting minutes of soccer I’ve ever seen in my life—and I watch a lot of soccer—inside Frisco’s Toyota Stadium on a cool November night in 2015.

Austin writer Phil West is the author of The United States of Soccer: MLS and the Rise of American Soccer Fandom (The Overlook Press, 2016).

In those 10 minutes, the scoreboard changed three times: First Dallas scored, and the animated crowd let out a pent-up roar that had been building throughout the night.

Thanks to that last goal, FC Dallas forced 30 minutes of scoreless extra time and then a penalty shootout that advanced the home team in the playoffs. And while a championship eluded FC Dallas that year (and all the other years of their existence so far), the experience gave further credence to Texas’ status as a soccer-loving state.

Major League Soccer (MLS) started in 1996, and Dallas is home to one of the league’s 10 founding teams. Originally called the Dallas Burn, the team played in the Cotton Bowl before moving to a new stadium in Frisco and rebranding as FC Dallas in 2005. Houston has one of MLS’s original franchises, too—albeit one that moved from California in 2006. Upon relocating to Texas, the Houston Dynamo proceeded to win two straight MLS Cups, the league’s equivalent of the Super Bowl.

Outside of MLS, Texas’ two best-drawing teams play in the United Soccer League (USL), a second-division league akin to Triple-A baseball or the NBA D-League. San Antonio FC and the Rio Grande Valley FC Toros have struck up a South Texas rivalry that animates fans in both cities whenever the teams meet. 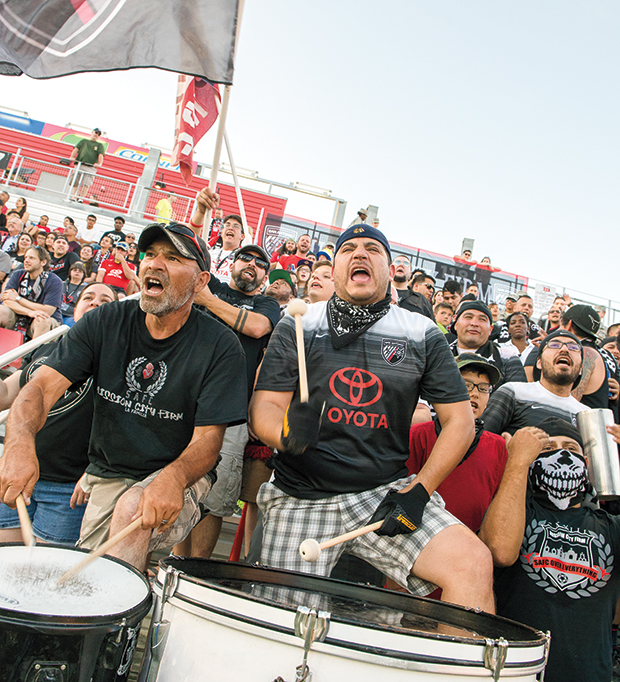 For sports fans, Texas’ growing professional soccer scene is affordable and accessible in ways that only exist at premium prices, if at all, in other professional sports. The San Antonio fan experience is a prime example. Parking outside northeast San Antonio’s Toyota Field is free, and tickets inside the 8,000-seat stadium range from $15 to $59. You can get in for just $10 if you’re willing to stand and scream with one of the team’s supporters’ groups.

Taking their lead from fans of European soccer clubs, fans of each of Texas’ biggest teams have organized supporters’ groups. The super-fans dress in the colors of their teams, develop chants they proudly sing or shout in unison during games, and, owing to a trend started by English fans in far colder climes, wear branded scarves that can be held aloft in both hands as makeshift banners.

San Antonio FC has four supporters’ groups, and they can be found hours before game time gathered for impressive tailgates in an unassuming dirt parking lot at Toyota Field. The largest of the groups, Mission City Firm, brings brisket and menudo to their tailgates, accompanied by a sound system playing an eclectic mix of Tejano, punk, and soul music. Another group, the neon-adorned, class-clown Gardeners, gathers for grilled meat and suds from local craft breweries. And San Antonio’s newest supporters’ group, 210 Alliance, kicked off the 2017 season with an impromptu crawfish boil.

An hour before the game starts, Mission City Firm leads a march into the stadium, chanting all the way from the parking lot to the security gate—and they’ll stand and chant for the entirety of the game’s two 45-minute halves. Occupying specific sections around the stadium, the supporters’ groups add color and excitement to the match. They often set the tone for how fans cheer throughout the stadium, prompting team officials to cultivate relationships with the groups.

That’s the case for Rio Grande Valley FC, which is among the USL attendance leaders even though the club is only in its second season. Along with the brand-new, 9,700-seat H-E-B Park in Edinburg and inexpensive tickets that start at $5, The Stampede supporters’ group helps drive the new club’s popularity.

“Their presence and the way that they’re interacting with the other fans has really helped us start the season on the right note,” says Marc Treviño, who serves as the club’s supporter liaison. 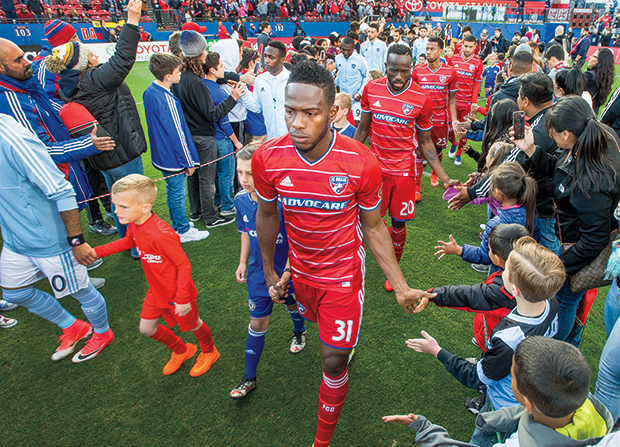 While the annual rivalry games between FC Dallas and Houston Dynamo, known as the Texas Derby, generate the most electricity for hard-core fans, MLS is making gains in its quality of play and increasing the appeal for fans watching any given week. Most of the games are held at night to escape the worst of the heat during the MLS regular season of March through October.

David Beckham’s arrival to the LA Galaxy in 2007 started a trend of big-name European players coming to MLS in their 30s to close out their careers. But in more recent years, high-profile European and Central and South American players in their prime have joined elite American players to elevate the league’s collective talent. In Texas, fans celebrate FC Dallas’ imaginative Mauro Diaz, an Argentinian, and Houston’s goal-minded Erick “Cubo” Torres of Mexico.

The MLS teams also have impressive supporters’ groups worthy of top-tier team status. In Dallas, the Dallas Beer Guardians start the season with a 24-hour tailgate leading up to the first home game, and they commandeer the bleachers in the North End Budweiser Beer Garden throughout the season. The Beer Guardians are also the current keepers of the Supporters Shield, a fan-created trophy given to the primary supporters’ group of the MLS team with the best regular-season record. 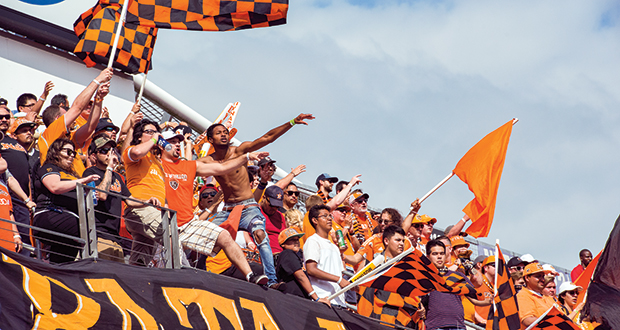 Houston has three main supporters’ groups, including El Batallon, which sings Spanish chants and plays trumpets and drums for the entire match, and the Texian Army, which is so serious about its tailgating that organizers meet at the start of the season to plan out the weekly menu. In past years, they’ve timed their most ambitious barbecue feasts for home games with Sporting Kansas City, inviting rival fans to partake. “That way, they can see what good barbecue is like,” laughs club President James Hromadka.

At game time, all three groups congregate in the upper-deck section directly beneath the stadium’s scoreboard. When Houston scores a goal, they unveil a massive Texas flag with the Dynamo’s signature orange and black colors filling in for the typical red and blue. During the season, the Dynamo share their stadium with the Houston Dash, Texas’ only National Women’s Soccer League team, featuring Women’s World Cup win-ners and Olympians Carli Lloyd and Morgan Brian. The Dash joined the NWSL as an expansion team in 2014 and have yet to make the playoffs in their three seasons.

But, before the teams take the field, soccer provides the occasion for fans to eat, drink, and be merry outside the stadium. And in Texas, they do it with meat, local craft beer, and scarves that the weather absolutely does not call for.