Written by: Roger Wood
Photos by: Will van Overbeek 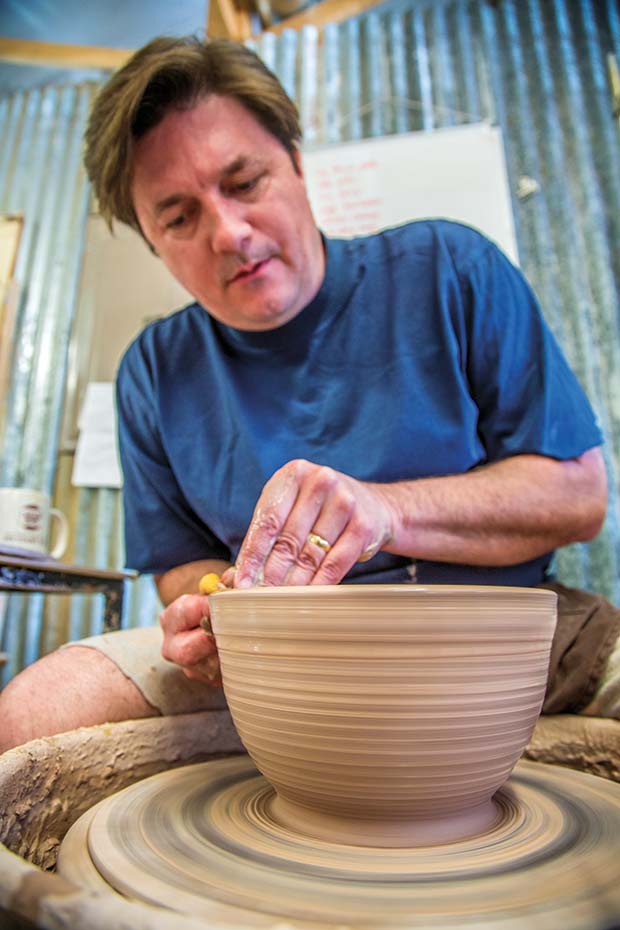 “Right now I’m throwing the stems,” he explains, deftly forming the base-and-axis component of a wine goblet. “Working on a batch of 80—did the cups yesterday. Tomorrow I’ll put the pieces together.” In response to a query about the ceramic type, he adds, “It’s stoneware, the strongest, which requires the maximum temperature, almost 2,400 degrees, when we fire the pieces in the kiln—and also the right kind of clay.”

On that note, Tim Kelley, the facility’s owner and our impromptu tour guide, chimes in, “We get the clay already mixed from Armadillo Clay in Austin. Our inventory is 100 percent Texas product, made by Texas potters with native materials.” This affable entrepreneur, a native of Vermont, clearly takes pride in the Lone Star State provenance of the various wares created here. He is also knowledgeable and appreciative of the history of the place where he and his wife, Gloria, founded Castroville Pottery seven years ago.

As the name suggests, the enterprise is located in Castroville, a town on US 90 about 30 miles west of San Antonio. For more than 30 years, my wife and I had occasionally driven through town during full-day treks to or from the Big Bend region. We had always noticed—and puzzled over—a sign proclaiming it “The Little Alsace of Texas,” but never previously stopped for a visit. However, as we’ve recently discovered, Castroville’s unusual cultural heritage and many charms make it a worthy destination for a weekend vacation in its own right.

On our visit, we stay in the historic district at Castroville Cottages, a collection of three properties within easy walking distance of places to shop, eat, and sightsee along narrow streets with shady oak and pecan trees. (Castroville Cottages’ nightly rates range from $78.40 for a room to $252 for an entire home, tax included.) Our lodging for the weekend, the Henri Castro Homestead, was built in 1845 by the founder of the town. The comfortable and well-appointed little chalet exceeds our expectations with its architectural features (an old interior root cellar has been converted into an extra bedroom nook), antique furnishings and décor, and practical amenities (the kitchen is equipped with modern appliances and handy utensils). In the front parlor on the wall opposite a stone fireplace, a large placard titled “A Chronology” offers a detailed overview of the abode’s succession of ownership. But for the next two nights it’s our delightful home base for exploring the town.

Henri Castro, a native of France of Portuguese-French ancestry, first came to the Republic of Texas in 1841 seeking land grants to attract French immigrants to southern Texas. Three years later, Castro and his initial group of families from the Alsace region of northeastern France established the town on the western frontier along the Medina River. With rough-cut stone, timber, and plaster, they built distinctive sloped-roof houses and other structures (more than 60 of which survive in use) reflecting the intermingled French, German, and Swiss roots of their homeland. Despite some early conflicts with Comanche raiders and other setbacks, the colony became an important stop for westbound wagon trains and stagecoaches.

These days Castroville retains the uncanny ambiance of a European village infused with Texas lore, and it seems that every property has a story. Castroville Pottery, for instance, occupies the renovated structures of the Dolch-Hans Compound, an officially recognized Texas Historic Landmark. The oldest component is a stone house, built around 1860 by the German immigrant Louis Dolch. In 1907, a butcher named Ed Hans purchased it and constructed the red brick building next door, where he operated Hans Meat Market. He stabled livestock in the large board-and-batten barn in the back and cured meat in a wooden smokehouse nearby.

Today, Dolch’s original residence functions as the pottery company’s business office, and Hans’ butcher shop is the retail store showcasing its ceramic housewares, artwork, and gift items. The expanded two-story barn now contains the manufacturing studio as well as lodging space for resident artists and two smaller studios for pottery-making classes. “We are also a teaching facility,” Kelley notes, “but we are concentrating more and more on production and online sales. We’ve found that people all over the country want these handmade Texas products.”

My wife and I concur, and after browsing the merchandise, we eventually depart with some finely crafted wide-bottomed coffee mugs ($15 each) and a ceramic water bowl ($22) for our dog. Following the short stroll back down Fiorella Street to our cottage, we opt for an afternoon drive beyond the historic district to survey the rest of the town.

About a mile west of downtown, we find Castroville Regional Park, a 126-acre refuge nestled along the Medina River. For hikers, 13 short, interconnected trails run from the cypress-lined bottomland to the prickly pear-adorned crests of nearby hills. Two observation decks provide prime spots to look for hummingbirds, kingfishers, painted bunting, and dozens of other birds, and the park includes copious space for picnicking and camping (including 40 RV sites), tennis courts, and athletic fields. Visitors can swim in the Medina or cool off in the park’s swimming pool. Also worth seeing is The Garden of Roots, a flower garden in the shape of the Alsace region.

Indeed, during our car tour we are constantly reminded of the Alsatian connection. There are signs for the Hotel Alsace & Spa, the Alsatian Resort & Golf Club, and Haby’s Alsatian Bakery (known for baked treats like traditional fruit-filled stollen pastries). There is also the extraordinary Steinbach Haus, a two-and-a-half story home originally constructed by the Steinbach family between 1618 and 1648 in Alsace in a style called fachwerk (with timbers from the Black Forest, wooden pegs, and stucco-covered reed panels). In 1997, an Alsace-based heritage organization purchased the structure, disassembled it piece by piece, shipped it to Texas, and, for the next four summers, sent volunteers to reconstruct it here. Filled with donated late 19th-Century Alsatian furnishings, it now serves as a town visitor center. 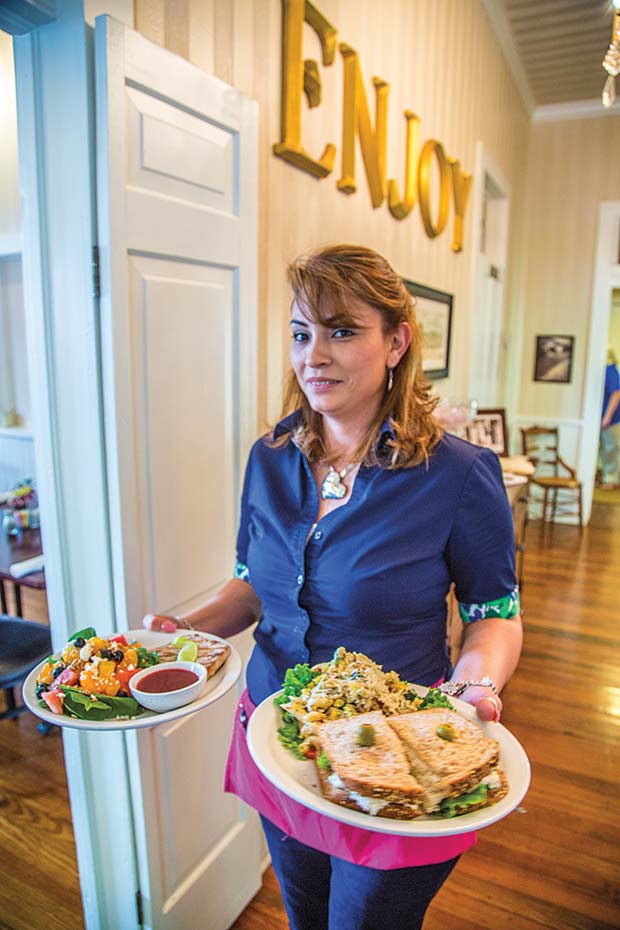 One of the highlights of our trip is a sumptuous evening meal at Castroville Cafe, based in a renovated 1915 house on Lafayette Street in the historic district. At the suggestion of chef Margarith Curel, we sample a series of excellent appetizers: celery stuffed with gorgonzola and pecans, mushroom bruschetta, black mussels in whiskey cream sauce, and homemade rolls served with garlicky pesto. For the main course, I savor the Cafe Cowboy Steak, an aged sirloin delectably flavored with an earthy ancho chile espresso rub, while my wife opts for the grilled flounder fillet with arugula lemon sauce. For dessert, we sip coffee on the café’s porch and split a slice of decadent cheesecake with blueberries.

The next day we walk the neighborhood and dawdle for hours in the nearby shops. Our favorite, Under the Rainbow Antiques & Furnishings, offers diverse collectibles like vintage lamps, vinyl records, and framed artwork from more than 20 vendors. The merchandise occupies the lobby, main floor, and balcony of the former Rainbow movie theater (1943-1976). The cashier on duty tells us about the building’s past—and even opens the long-abandoned projection booth upstairs to reveal the antiquated film projectors, salvaged from a naval vessel scuttled in Galveston in 1939.

When it’s time to depart for home in Houston, I grab a to-go cup of inspiration from the Octane Coffee & Tea Haus, a cozy shop inside the old Magnolia Service Station building. On the highway at the Medina River crossing, we see the Landmark Inn State Historic Site, a bed and breakfast operated by the Texas Historical Commission that has been closed since 2014 for a preservation and renovation project. Eager to experience this legendary Texas inn for ourselves, we add its eventual reopening (scheduled for December 5) to our ample list of reasons to return to Castroville someday soon.