Written by: Michelle Burgess
Photos by: Will van Overbeek

Written by Lois Rodriguez, Photographs by Will van Overbeek | From the April 2016 issue | Updated: March 21, 2016 | Filed Under: TRAVEL 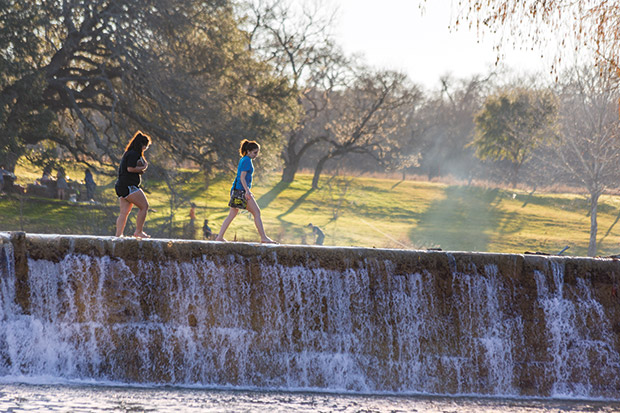 I was sitting in an Adirondack chair on the back porch of my rental cabin at Blanco Settlement, feet up on the rail, as a thunderous rainstorm pounded the tin roof and swelled the gray-green waters of the Blanco River, less than 60 feet below my vantage.

Checkout time had passed, but visibility on US 281 was dangerously compromised, so for the time being, I was stuck. As far as problems go, though, it was a pretty good one to have—especially considering that two weeks later, the rains fell with considerably more force, destroying the camping facilities just a few yards from where I sat and sweeping away the bridge I crossed to get home.

The 2015 Memorial Weekend flooding killed more than two dozen people across the state, wreaked damages in the tens of millions of dollars, and catapulted Wimberley, San Marcos, and Blanco into the national spotlight. The least populated of the three with fewer than 1,900 residents, Blanco is also the most remote and rural of these hardest-hit areas. But while their numbers are small, those who call Blanco home have proven to be a mighty force when it comes to taking care of their town. Repairing its structures and healing its citizenry in the floods’ aftermath have been no different.

“Following the storms, Blanco residents looked after each other not just as a community, but as a family,” said resident Connie Barron. “From the first call to open an evacuation center until victims were well into the rebuilding process, neighbors pitched in to give help wherever it was needed.”

A return trip eight months later reveals few visible scars and a welcoming community still eager to parlay the town’s natural beauty and historic charm into a destination that tourists think of when planning their vacations. Blanco Settlement—the most heavily damaged lodging facility in and around town—is again operating at 100 percent. The riverside cluster of well-appointed cabins, RV parking pads, and an eclectic gift shop sits less than two miles east of the town square, the hub of activity for the 158-year-old burg. Despite the square’s location along busy US 281, in years past most Hill Country tourists didn’t regard Blanco as more than a well-situated place to stop for gas.

But then, in 2004, the town launched the annual Blanco Lavender Festival (June 10-12, 2016), which has grown into a weekend destination for visitors to Central Texas. And in 2006, Real Ale Brewing Company outgrew the basement digs it had occupied on the town square for 10 years and built a new brewery about 1.5 miles north to accommodate the uptick in visitors it attracted when craft beer became a movement. Along the way, a core group of Blanco residents decided that their town could be, and should be, more than just a quick pit stop.

They are the folks who kept Blanco State Park open when it was threatened with closure in 2011, and whose efforts fuel a never-ending roster of improvement projects. It is thanks to volunteers that Blanco has a springtime Arts in the Park series with weekly live music in downtown’s Bindseil Park, and that the Old Blanco County Courthouse is open as a historical landmark and event venue more than 125 years after the county seat moved up the road to Johnson City.

Barron and fellow volunteers stage the annual Wild Woman Weekend, an April event launched in 2012 that draws women of all ages from across the country to enjoy a mix of outdoors, artistic, and social activities to benefit several of the town’s nonprofits. Billed as “the ultimate gal-pal road trip,” this year’s event (April 8-10) features a 5K run and “Mimosa Mosey,” fishing lessons, kayaking, live music, outdoor movies, casino night, and wine and
beer tastings.

For first-time participants, Wild Woman Weekend serves as an introduction to Blanco’s hotels, restaurants, shops, and other attractions. Organizers hope that many will return to enjoy 105-acre Blanco State Park, set on the banks of the Blanco River and completely contained within the city limits. Locals are quick to point out that it is the only state park where visitors can hike, fish, paddle, and swim all day, then walk across the road to have dinner in the middle of town before returning to camp for the night. Like the town that surrounds it, Blanco State Park is small but packs a big punch. On just under two miles of looping, paved road, the park is lush, accessible, and an ideal choice for families and novice or reluctant campers.

More natural beauty is on display at the area’s two lavender farms, where customers cut their own bunches of the fragrant flower that has come to be associated with Blanco over the past two decades. Hill Country and Imagine lavender farms’ hours are seasonal, primarily concentrated in the blooming season that begins in mid-May and some years extends through Independence Day, but both companies’ products are available all year in local shops and online.

Though the lavender fields bloom seasonally, Blanco is a picturesque and manageable destination year-round—there’s plenty to do but not so much that visitors have to forsake some attractions for lack of time. Unlike some larger towns, diminutive Blanco lends itself to a clear-cut itinerary: breakfast at Chess Club Café, lunch at Redbud Cafe—or maybe the 1948 Blanco Bowling Club Cafe, if you’re hoping to get in a few frames of 9-pin—and dinner at Old 300 BBQ. In between, there’s shopping to be done, most notably at shops such as Brieger Pottery and Liz on the Square (with everything from motorcycle leathers to scented candles).

History buffs will appreciate the Buggy Barn Museum, which showcases one of the largest collections of restored 19th- and early 20th-Century horse-drawn vehicles in the country. When not being used in movies or for private events, the carriages are displayed at the jam-packed museum compound. Located just north of the square on US 281, the museum grounds also feature an Old West town façade called the Pine-Moore Town, where special events are held throughout the year. November’s Hill Country Western Showcase features cowboy music, gunfighter reenactments, blacksmithing demos, and the like.

Guests will find a different sort of entertainment just half a mile from the museum at the Real Ale brewery, which produces 15 year-round beers. Only available in Texas and named for its unfiltered, unpasteurized brewing process, Real Ale has been crafting beer in Blanco since 1996 using water from the Blanco River. Free tours of the facility—housed in a white, metal-sided building—are offered twice a day on Fridays and Saturdays. Last year, Real Ale built a sleek new tap room (open Thursdays-Saturdays) with long wooden tables, broad windows, and 14 Real Ale beers on tap.

At press time, the blue-green Blanco River flows at a healthy volume, meandering around and through town, showing neither the barrenness of past droughts nor the menace of last year’s disaster. A new bridge on Ranch Road 165 is scheduled to open this spring, and in the meantime, a temporary detour keeps Blanco Settlement in business and residents connected. Those residents hope that as their town’s reputation grows, it will be as the welcoming, must-see Hill Country destination they have worked so lovingly to nurture.