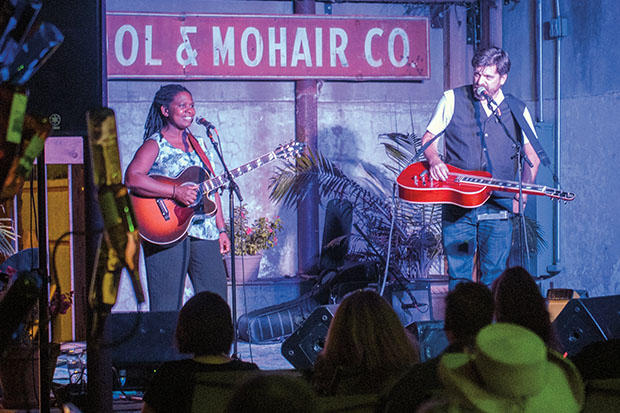 The Green Apple Art Center occupies buildings that once served the wool and mohair industry. In September 2017, Ruthie Foster took the stage with Jeff Plankenhorn.

At first glance, the small town of Eden on the edge of West Texas may seem an unlikely spot for live music. With fewer than 3,000 residents, the town is far off the beaten path in Concho County, at least a few hours by car from any major metropolis. Yet nearly every month from late January through October, visitors flock here to watch acclaimed musicians play the stage of the Green Apple Art Center. 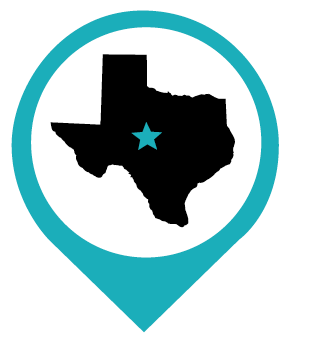 The open-air venue is tucked within a cluster of three buildings that once served as a warehouse, feed store, and locker plant for the local wool and mohair industry. With that industry in decline, Eden has worked to reinvent itself—and that’s where live music comes into play. The venue’s dilapidated building sat empty for more than 20 years before the owner donated it to the city in 2009. Through grants and volunteer labor, the community formed a nonprofit corporation that converted the old buildings into a space for cultural arts. The concert series kicked off in 2013, spearheaded by rancher Craig Pfluger, who serves as music director when he’s not managing his herd. “I got inspired by the Odeon Theater in Mason, and Mason is not much bigger,” he says. “If they are doing it in Mason, we could do it in Eden.”

The Green Apple’s front door opens onto a room measuring about 2,000 square feet, with no roof to obstruct the sky. (In inclement weather, the music moves to either the adjoining building or the town civic center.) On concert nights, the space bustles with guests mingling around cocktail tables. Most concertgoers arrive early for the 7 p.m. buffet dinner, included in the $25 to $30 ticket price. Local volunteers prepare the food, made up of crowd-pleasing fare like barbecue, fajitas, and brisket.

People come to listen to music. And the musicians like that the audience is listening. They want to be a part of it.

The venue does not serve alcohol, but guests can bring their own beverages, and they often show up with coolers of beer and wine. A sense of camaraderie pervades the expansive room, with the crowd ranging from schoolchildren to nonagenarians. About 60 percent are out-of-towners. “West Texas is so friendly,” says one regular attendee. “If you don’t know someone, you will. We’re not going to let you stand around and look stupid.”

After the dinner social hour, guests filter into the back room, which has a stage in one corner and an awning for a roof. Guests quickly stake their claim on the best patio chairs for the 8 p.m. show. The venue initially offered seating for 120 and a series of six concerts; in subsequent years demand pushed those numbers to 165 seats and as many as nine concerts. Last October, the Green Apple used its back lot to host an audience of 400 for an outdoor performance by Austin songsmith Hayes Carll.

The Green Apple has expanded in other ways as well. Although initially focused on Texas singer-songwriters, the lineup has broadened to include roots music from other genres, such as the rocking Latin-inflected sounds of Del Castillo and the funky soul beats of Mingo Fishtrap out of Austin, and musicians from other states, including the Chicago-based blues guitarist Davy Knowles. Last year, the center hosted the likes of Texas blues songstress Ruthie Foster, singer-songwriter Radney Foster, and Victor Wainwright, boogie-woogie pianist from Memphis. This year’s roster features the country-roots guitarslinger Junior Brown, the country duo Bruce Robison and Kelly Willis, and Lubbock legend Joe Ely, among others. 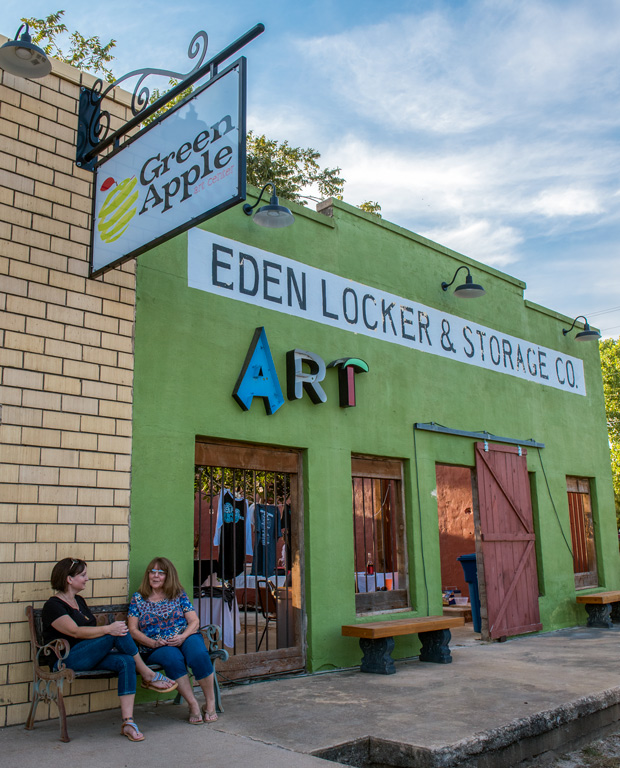 The concert series started in 2013 and has added seats to accommodate bigger audiences.

Pfluger admits that musicians are sometimes harder to wrangle than his livestock, stating simply, “Animals don’t talk back.” However, the outcome is worth the effort: “You begin to create an atmosphere, and everyone’s a part of it. There are good vibes here. It kind of feels like sitting in your living room and that the band is playing just for you.” The intimacy of the space makes for good listening. “At a bar, you can’t hear anything. Here, it’s quiet. People come to listen to music. And the musicians like that the audience is listening. They want to be a part of it.”

Wainwright concurs. He had heard about the Green Apple from other musicians and performed there for the first time last July to a packed house. His flair for showmanship and keyboard-pounding boogie-woogie blues energized the audience. Everyone listened intently, bursting into applause between songs. For Wainwright, the admiration was mutual. “There’s a
big sense of community here,” he observes. “They trust the venue to bring in music from different genres, and in return they’re coming out to support roots music. It’s a beautiful thing.”

Wainwright was especially pleased to see children at the show and to expose the next generation of listeners to America’s musical heritage. In this manner, Eden has found an inventive way to not only honor traditions of the past but also to revitalize the town with an eye to the future, attracting new visitors and invigorating the local cultural scene. With its enchanting venue and ambitious concert series, the Green Apple is putting Eden on the map as a music-lover’s paradise.