The Venice of Texas 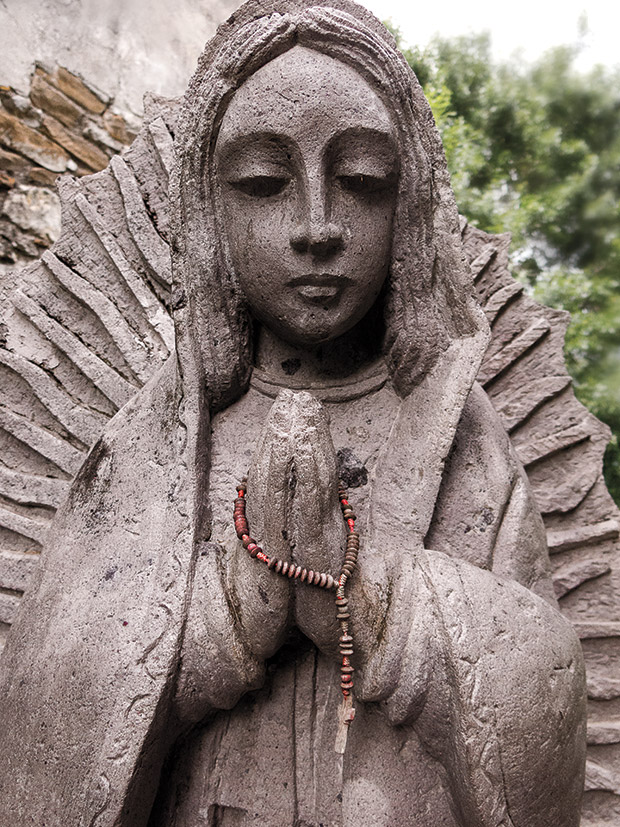 Just steps from San Antonio’s Main Plaza, established in the 18th Century and considered by many to be the heart of San Antonio, you’ll find the San Antonio River Walk, a dynamic pathway that leads you from the city’s heart into its soul. The River Walk weaves among the city’s icons and attractions via paved, cypress-lined embankments, across arched stone bridges, and through lively, multicultural neighborhoods.

Main Plaza and The Saga

Originally a short downtown meander below street level, the San Antonio River Walk now rambles more than 15 miles from north to south, binding together some of the city’s best museums, restaurants, bars, museums, and historic sites. In an effort by River Walk planners and government officials to acknowledge the waterway’s most serene attribute—its beauty—the extension also traverses a stretch of the river that has been returned to its natural state. 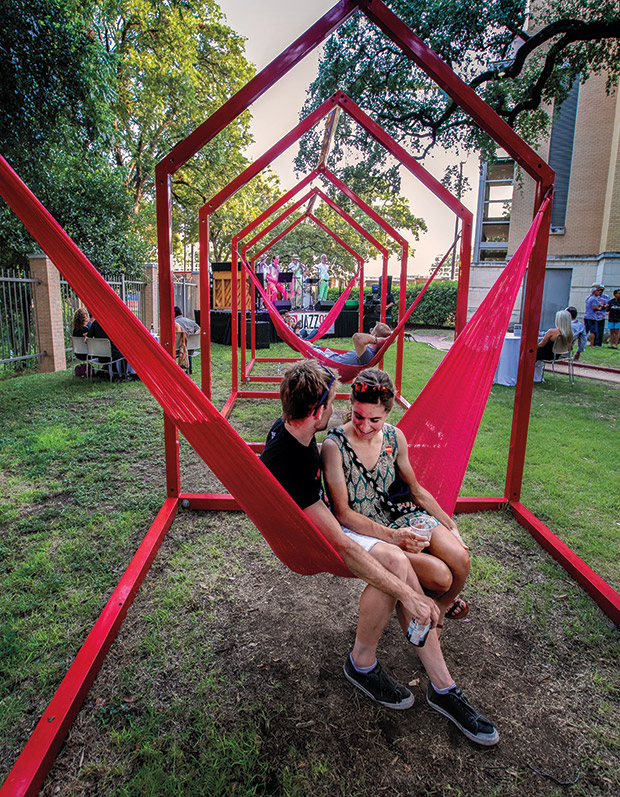 If starting at the Museum Reach, the River Walk’s northernmost end, you’ll begin in 343-acre Brackenridge Park, home to the San Antonio Zoo and the lush Japanese Tea Garden, and trek south toward downtown. This segment links several of the city’s major museums, including the Witte Museum and the San Antonio Museum of Art (SAMA), both just a few steps off the Walk. SAMA is one of the city’s primary venues for showcasing contemporary movements in art, and it also hosts special events like gallery talks, art parties, sketching sessions, and yoga classes
in the galleries.

Across the river from SAMA, a dog-friendly restaurant called The Luxury serves sandwiches and craft beers from a complex of artfully repurposed shipping containers. Thanks to a handful of swings overlooking the river, The Luxury provides a relaxing atmosphere to watch the scene unfold until you move on to the next attraction. A few blocks down the River Walk you’ll find VFW Post 76, considered the oldest veterans’ post in Texas. Housed in an early 19th-Century Victorian home built along the riverbank, Post 76 continues to serve its members while opening its bar and patio to the public. 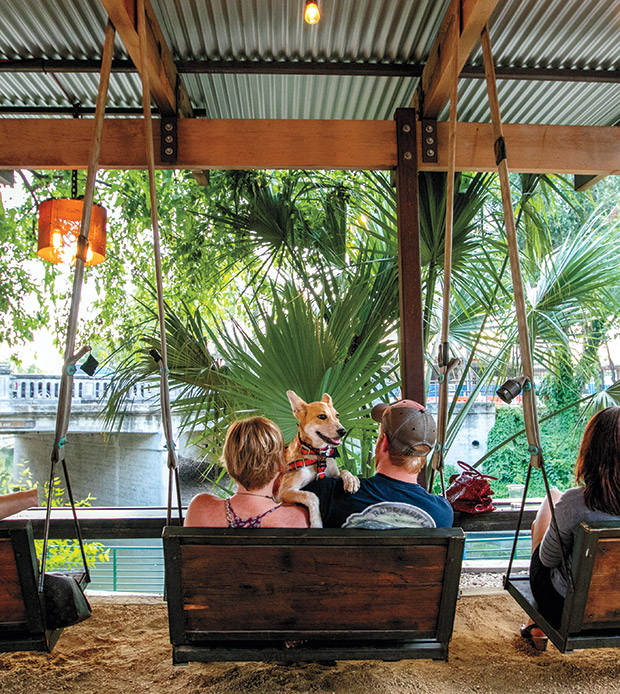 Taking in the scene from The Luxury, a dog-friendly restaurant along the Riverbank.

Farther downstream, the new Tobin Center for the Performing Arts stages concerts and free public events along its River Walk Plaza, a stepped, grassy amphitheater under the stars. With a facade of skeletal meshwork lit by a changing pattern of hues, the Tobin’s riverside venue provides a modern backdrop for Family Fitness sessions, a monthly Cinema on the Plaza, and performance simulcasts of big-ticket shows projected onto a 32-foot video wall.

The Museum Reach also encompasses the Pearl District, one of the more dazzling gemstones of San Antonio’s downtown revitalization efforts. The Pearl occupies the site of the former Pearl Brewery, established along the San Antonio River in 1883. After surviving Prohibition, the brewery continued to produce its signature Pearl beer until 2001. Many of the historic buildings have been reconfigured and fully renovated, and today enjoy second lives as restaurants, retail shops, offices, apartments, and the classrooms and kitchens of the Texas campus of the Culinary Institute of America. The Pearl’s magnificent Second Empire-style brew house, completed in 1894, is now a culinary-focused boutique hotel called the Hotel Emma. On Saturday and Sunday mornings, year-round , the Pearl hosts a farmers’ market where you can enjoy live music and buy foodstuffs like goat cheese, eggs, and raw honey, along with ready-to-eat treats like tamales, wild mustang grape jelly, and empanadas.

The Museum Reach eventually gives way to the historic downtown River Walk, where you’ll pass some of San Antonio’s traditional attractions, including Main Plaza. The Plaza is home to the city’s San Fernando Cathedral, constructed in the 1700s and currently serving as backdrop for The Saga, a 24-minute video projection depicting the city’s history. The site-specific artwork, created by French artist Xavier de Richemont, features a fast-paced video covering the cathedral’s facade several nights a week, transforming the Spanish Colonial and Gothic Revival structure into a psychedelic animation set to music. 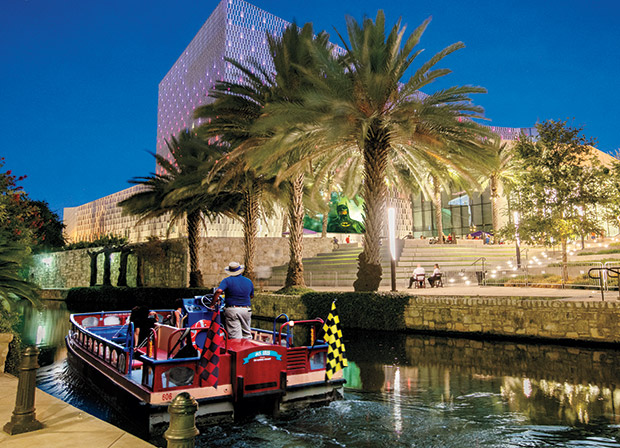 A river taxi plies the water beside the Tobin Center for the Performing Arts.

Construction of the downtown portion of the River Walk began in 1939 along a 21-block section from Nueva Street to Lexington Avenue. By 1940, it incorporated new walkways, footbridges, rock bank walls, and stairways leading to street level. The flood-prone river had been made safer by the addition of dams, flood gates, and bypass channels constructed in the 1920s, making the River Walk possible.
The downtown section was completed just in time to celebrate Fiesta (the city’s annual springtime festival and now one of many events held along the River Walk each year) and quickly became the city’s primary tourist attraction.

San Antonio continued to build on the River Walk’s success, making modest improvements and extensions to the pathway throughout the second half of the 20th century. In 1998, the city implemented the San Antonio River Improvements Project, an ambitious plan funded with more than $384 million dollars. The project, a collaborative investment involving the city, Bexar County, the San Antonio River Authority, the U.S. Army Corp of Engineers, and the San Antonio River Foundation, sought to improve flood control, ecosystem restoration, and recreational opportunities along an additional 13 miles both north and south of the historic downtown River Walk segment. The project highlighted the river’s historical importance by embracing the southern string of Spanish Colonial missions, now part of the National Park system. Today, the expanded River Walk literally connects San Antonians to the city, its history, and the heritage they share.

“All Texans have roots in San Antonio,” the late Liz Carpenter, journalist and former press secretary to Lady Bird Johnson, once observed. Perhaps Carpenter’s statement holds more truth than hyperbole. San Antonio developed around the Presidio San Antonio de Béxar, a Spanish fortress established in 1718, and the five Spanish Colonial missions located near the river (including the Alamo, originally known as Mission San Antonio de Valero). By 1778 the population included Spaniards and other Europeans, mestizos (a mix of Spanish and Indian heritage), Africans (most likely slaves at the time), and the native people of the region. Judging from the diversity found throughout Texas today, it’s likely that many Texans can trace a familial root or two back to the banks of the San Antonio River.

The historic River Walk section transitions from downtown bustle to quieter neighborhoods along the one-mile Eagleland section, which runs through the King William district and the adjoining Southtown neighborhood. Backing up to the river at the southernmost spot of the Eagleland section, the Blue Star Arts Complex houses a contemporary museum, artists’ studios, a brewery, and a handful of restaurants, along with artist-run shops and galleries.

Blue Star is a popular point of departure for joggers and cyclists tackling the Mission Reach, the eight-mile southern leg of the River Walk. The bike-sharing program B-Cycle has installed a number of B-Cycle stations along the River Walk, including at Blue Star, where you can rent bicycles and return them later at any of the stations. 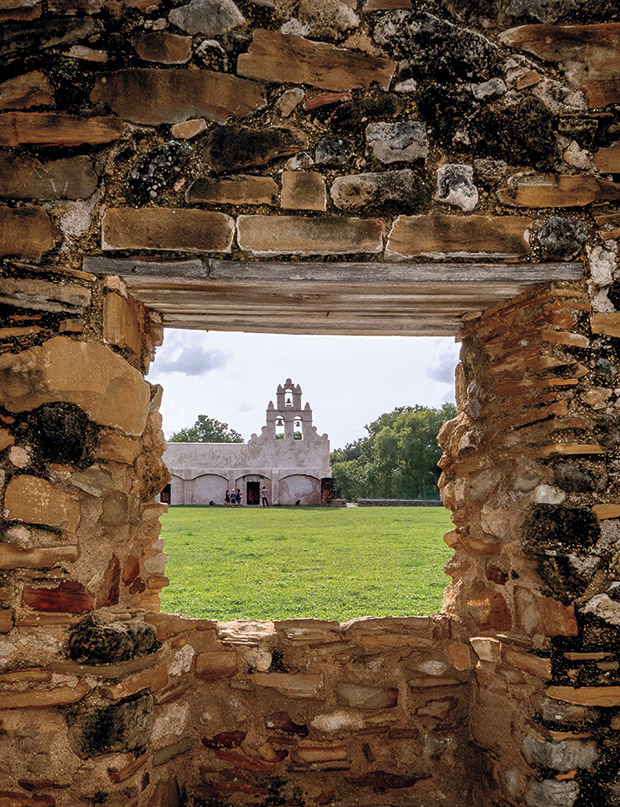 The Mission Reach divulges as much about the natural world as it does about the nature of San Antonio, connecting the river to its Spanish Colonial past as the waterway winds through the city’s multicultural neighborhoods. The paved hike-and-bike trail links four of San Antonio’s historic missions—Concepción, San José, San Juan, and Espada. After three hundred years, their bells still call the faithful to prayer.
Side pathways lead to each mission as well as to neighborhood parks. Along the route, pastures have been allowed to return to wild, quinceanera songs echo beneath oak bowers, and cyclists whiz past in streaks of neon green.

Spring along the Mission Reach explodes in wildflowers, hot-colored as cayenne, while summer dries the native seeds under stark skies. Kayakers navigate the riffles, often bringing their own craft or renting a kayak along the route. In autumn, mists rise above the watercourse while dew-damp grasses grow musky like the scent of wet dogs. Winter might layer the Mission Reach with thin light ice.

You’ll find that a day’s immersion along San Antonio’s River Walk will ultimately reveal the pathway’s true destination, guiding you through the city’s heritage to its people and their aspirations; and propelling you out of San Antonio’s past and into its present, celebrating all that the city has become, here and now.