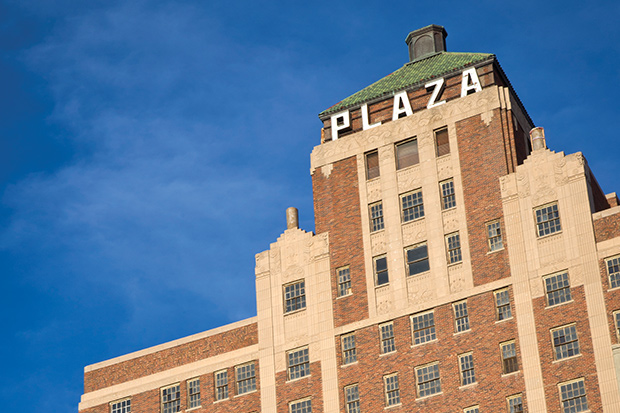 In downtown El Paso, the Trost-designed Plaza Hotel opened in 1930 as the Hilton Hotel. Elizabeth Taylor once lived in the penthouse as the young bride of Nicky Hilton, one of the hotel mogul’s sons. Developers are renovating the building as a boutique hotel scheduled to open spring 2019. Photo: Victor Barajas

It’s dusk on South El Paso Street, the buzzing thoroughfare that connects downtown El Paso to the Juárez bridge, and a man in a top hat and black coat strides down the sidewalk. Behind him trails a group of about 15 people, many of whom are also outfitted in Victorian garb.

The top-hatted fellow, who sports a fake black moustache, pauses in front of a white-arched façade, now home to the music venue Tricky Falls. He gestures toward the building and addresses the group:

“This is the 1914 Alhambra Theatre that I designed in the style of a Moorish palace in Andalusia,” he says, explaining that the Alhambra opened at the height of the Mexican Revolution to cater to the Mexican exile community. “This theater had the largest pipe organ in the entire Southwest. It was a tourist attraction; people came from all over to see it. The music that accompanied the silent films was just incredible.” 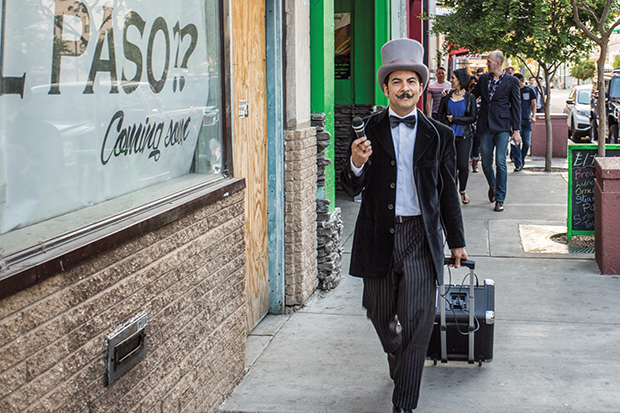 I scoot up to a man at the back of the group to ask what’s happening. “It’s a Trost Society tour and pub crawl,” he whispers, and points to their mustachioed leader. “That’s Trost. You can come with us.”

“We have unique building stock here representing every period of Texas history, and even earlier, going back to the Republic of Mexico and even the Kingdom of Spain.”

I’ve happened upon one of the most compelling movements happening right now in El Paso, a reawakening to its architectural richness. And nobody gets more credit for the city’s look than architect Henry C. Trost. From the early 1900s until his death in 1933, the firm Trost & Trost designed more than 500 buildings from the Pecos River to Tucson, with over a third of them in El Paso. Mastering styles from Prairie to Spanish Colonial to art deco, Trost proved to be one of the country’s most versatile and prolific architects, though relatively unknown to this day. Thanks to the work of the Texas Trost Society and a few preservation-savvy entrepreneurs revitalizing Trost’s iconic buildings, El Pasoans are rediscovering the wealth of architecture that graces their city with its distinct sense of place.

If you’ve ever sat on the front porches of the historic Gage Hotel in Marathon
or the Holland Hotel in Alpine, you’ve had a taste of Trost’s architectural mastery. If you’ve walked through the courtyard of the Paisano Hotel in Marfa or Hotel El Capitan in Van Horn, then you’ve passed under archways designed by Trost. Born in Ohio in 1860, Trost worked in various Western cities and Chicago—within the professional circles of Frank Lloyd Wright—before settling in El Paso in 1903. During a period of prosperity and growth in Texas’ westernmost city, he launched Trost & Trost with two brothers and a nephew. The Trosts built everything from setback skyscrapers to graceful Mission-style residences, along with countless churches, schools, firehouses, and hotels.

The spirit of Trost soars when spending time with Max Grossman, the aforementioned Trost impersonator, who is actually a University of Texas at El Paso professor of art and architecture history. Grossman, along with his wife, Malissa Arras, and their close friend Mason Sales, founded the Texas Trost Society in 2013 to spread the word about El Paso’s architectural heritage and how it can be cultivated to benefit the whole city. Arras, the nonprofit’s executive director, cuts a convincing Trost figure herself, moustache and all. She too leads walking tours dressed as the architect.

Formed in reaction to the demolition of several historic downtown buildings, the Texas Trost Society has devised creative ways to elevate Trost’s profile. They guide entertaining pub crawls like the one I lucked upon. They build educational displays in the first-story windows of the Kress Building, across from downtown’s San Jacinto Plaza; one shows the architectural evolution of El Paso from an adobe village to today. The society also published an adult coloring book of Trost buildings, and it provides tours and presentations for local schools. This March, the society will convene a group of Trost-building owners and Trost aficionados for the first time at the Holland Hotel and Gage Hotel to discuss all things Trost.

A few months after I crashed the pub crawl—a high-spirited evening that ended with a Trost trivia quiz—I meet up with Grossman for a personal tour of downtown El Paso. He points out the quatrefoils on one building, saying “they come right out of French Gothic architecture.” He shows me the gorgeous downtown post office, aspects of which are “inspired by the churches of medieval Byzantium.” We pause beneath the Trost-designed Cortez Hotel where JFK stayed in 1963—now an office complex—and the Trost-designed former Hilton Hotel, later renamed the Plaza.

“El Paso is a showcase of architectural styles like no other city,” Grossman says. “Not only do you have this incredibly rich architectural patrimony, but you have buildings that represent just about every style you can think of, as well as some styles you would never think of.” 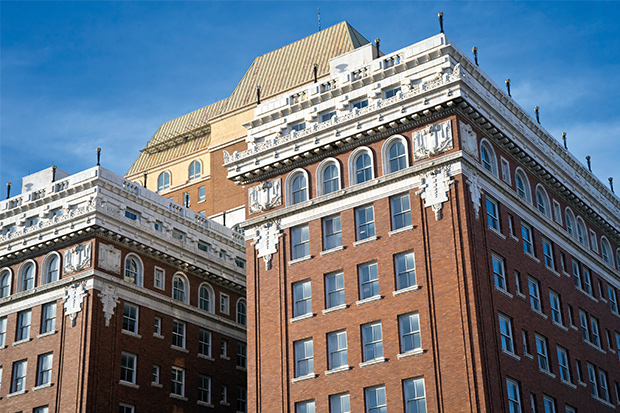 Grossman says the Texas Trost Society aims to raise the profile of El Paso’s architecture, partly to generate tourism. “We have unique building stock here representing every period of Texas history, and even earlier, going back to the Republic of Mexico and even the Kingdom of Spain,” he says. “El Paso is the best-kept secret, not only in Texas but also probably in the entire Southwest.”

Others recognize this too. In 2006, after a long restoration process, the El Paso Community Foundation, in tandem with the city, successfully reopened the Plaza Theatre, a 1930s jewel that had narrowly escaped the wrecking ball. The theater became a shining example of how the restoration of cherished historic buildings can elevate a neighborhood.

Within a year of the Plaza Theatre’s reopening, local billionaire Paul Foster bought three historic properties nearby. He has meticulously restored the Trost-designed 1911 Mills Building, the largest poured concrete building in the world when it was built. It is now a gleaming office building with a popular first-floor restaurant, Anson 11. The eatery is named for General Anson Mills, a surveyor as well as military man, who platted the city of El Paso in 1859. If you go to the bar of Anson 11—a lively happy hour spot—check out the neon-rimmed portrait of the general looking out over the dining room, a twinkle in his eye.

J.P. Bryan, the Houston businessman who bought the Gage Hotel in Marathon in 1978, cut his teeth with the renovation of that Trost building. With time and perseverance, the Gage has thrived, and its success has rippled out into the surrounding community, bringing new life to an old railroad town.

For more about the Texas Trost Society’s work and events, and to find a map of downtown El Paso buildings designed by Henry Trost, visit texastrost.org.

“Trost may be one of the greatest architects in American history in terms of his innovation, his creativity, and his ability to present any architectural type, unlike his compatriot Frank Lloyd Wright, who was primarily interested in Prairie,” Bryan says. “Trost could do whatever he wanted, but he wasn’t going to do it without giving you the best. What he has left the city of El Paso in terms of architectural heritage is phenomenal.”

El Paso entrepreneur Lane Gaddy is also shepherding the restoration of historic Trost properties. He plans to transform Trost’s downtown 1910 Roberts-Banner Building, reportedly the site of clandestine meetings of Mexican spies during the revolution, into an office and retail space. Gaddy also bought one of Trost’s last projects, the O.T. Bassett Tower, a 1930 art deco New York-style skyscraper. It reopened in February as a hotel—the Aloft El Paso Downtown.

“The more you dive into these buildings, the more you appreciate the exquisite level of detail, how the design is timeless,” Gaddy says. “And they’re in El Paso, where you get a blend of the Southwest, Texas, and Mexico in a way that no other region has. So it’s not just the building itself, but its surroundings, too, that together tell a story no other city can tell.”

As downtown El Paso transforms, the Texas Trost Society works to cultivate a community of more informed Trost fans—people who understand that these old buildings are important traits of El Paso’s identity; that once they are lost, they are lost forever. “We don’t want to be Phoenix or Las Vegas,” Grossman says. “We want to be El Paso.”