Why 2018 Is the Perfect Time to Revisit San Antonio

The Alamo City readies dozens of celebrations for its Tricentennial 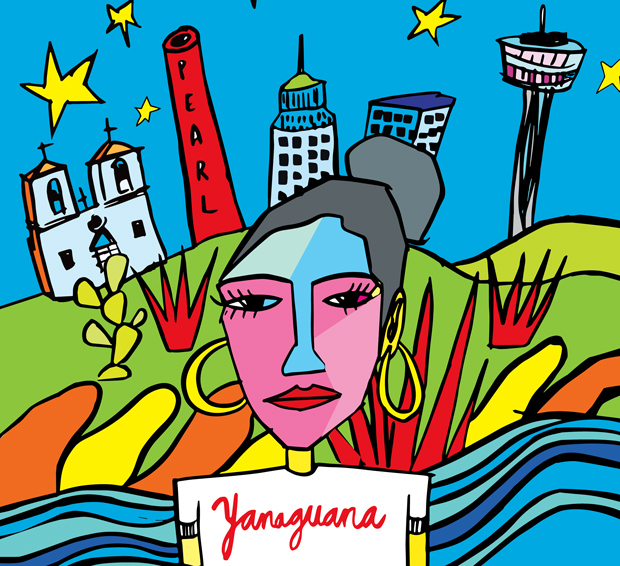 May 1, 1718: It’s the moment in San Antonio’s long, convoluted history the city points to as its founding. It’s also the focal point of this year’s San Antonio Tricentennial celebration, a 12-month spotlight on the details that make this vibrant city so special to so many. Today, millions of tourists head to San Antonio to see the Alamo up-close before they discover the city’s present-day charm: the way the River Walk sparkles at dusk every December with hundreds of twinkling holiday luminarias, the way colorful papel picado decorates nearly every corner of Market Square, the way conjunto music effortlessly fuses the accordion and bajo sexto guitar in dance halls across town, the way a flash-fried puffy taco creates an intoxicating aroma out of fresh masa. The city’s modern-day story is only just beginning, but the same could have been said 300 years ago. The story, of course, begins much earlier than that.

More than 10,000 years ago, indigenous people, including the Payaya, a Coahui- ltecan tribe, called present-day San Antonio home. They named their village and its river Yanaguana—“refreshing waters.” It was a sacred place—warm, with rich soil and plentiful game and fishing—the very characteristics that would attract waves of people in the centuries to come. 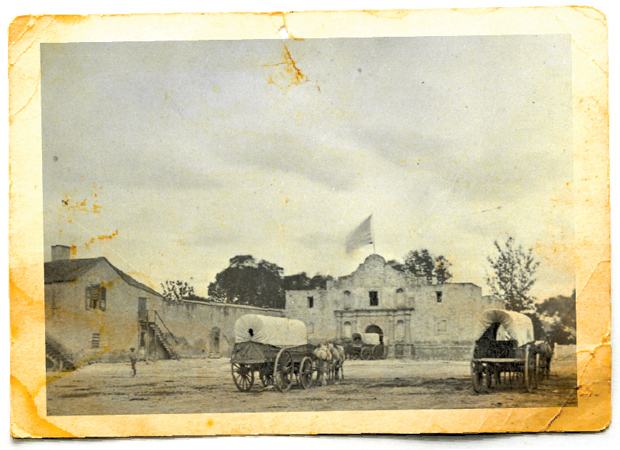 Covered wagons in front of the Alamo, 1868 (UTSA Special Collections)

“San Antonio was such a potent and astonishing place to live, and had such great flora and fauna. That’s why people came,” explains Marise McDermott, president and CEO of The Witte Museum, which is dedicated to South Texas heritage, history, and science. Hunting and gathering helped the Payaya prevail. In addition to eating fish, deer, prickly pear, and pecans, the tribe lived on bison—“a symbol of bounty,” McDermott says—and traded with others who traveled from as far as thousands of miles away. The Payaya lived in small bands along the water, speaking dozens of languages.

It was a sacred place—warm, with rich soil and plentiful game and fishing—the very characteristics that would attract waves of people in the centuries to come.

“People lived pretty well and, for the most part, peacefully,” McDermott says. “We assume there were territorial skirmishes, but not in the same way as with the Egyptians or the Romans or the Greeks. It was really 12,000 years of getting along and trading.”

So how did San Antonio become the modern, culturally diverse city— the seventh largest in the United States—that it is today? This part of the story begins when a group of mostly Spanish- Indians loyal to the Spanish crown pushed their colonial empire north from present-day Mexico in search of a place to found Catholic missions and a military post, a strategic defense against other empirical powers, particularly the French. In the spring of 1718, they reached a bountiful stretch of land along a river—a place where they could set up a civilization along a major trade route, with waterways suitable for irrigation. The arrival of Canary Islanders in 1731 marked the establishment of a permanent Spanish settlement. Most were farmers, laborers, peasants, and fishermen when they answered a petition from the King of Spain to settle the far-flung provinces in New Spain. In the next century, the Spanish built five missions (Mission San Antonio de Valero, Mission San José, Mission Concepción, Mission San Juan, and Mission Espada) to protect the settlers and to expand Christianity. Today, they stand as the largest concentration of Spanish Colonial missions in North America, named a World Heritage Site in 2015 by the United Nations Educational, Scientific, and Cultural Organization (UNESCO). 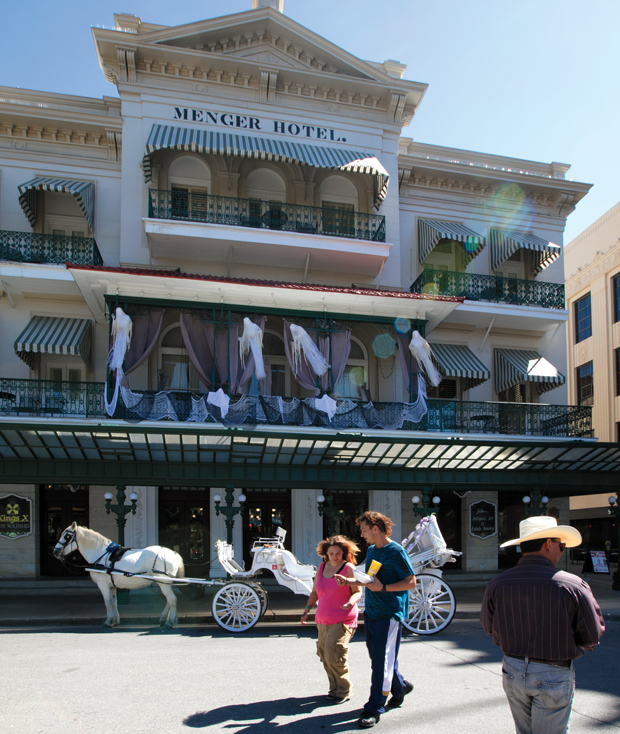 The oldest continuously operating hotel west of the Mississippi, the elegant Menger Hotel was built on the battleground of the Alamo less than a quarter century after that bloody fight for Texas independence.

“You can learn about a culture of a people and their history through art in ways that you might not ever be able to learn through any other resource—it might be the only thing that survives.”

This year’s Tricentennial events will take place at venues across the city throughout 2018. In honor of the city’s past, the Witte will unveil its Tricentennial exhibits: Gathering at the Waters: 12,000 Years of People this January, and 300 Years of San Antonio History: Confluence and Culture in March. The word choice, confluence, is an intentional double entendre, as it represents the joining of cultures over centuries at the confluence of the San Antonio River and San Pedro Creek. This January at the same site, the city will celebrate its future with the grand opening of Confluence Park, featuring educational pavilions, colorful murals, a large-scale water catchment system, and an inviting gateway to hiking and biking trails along the Mission Reach portion of the San Antonio River. It all comes together as a life-size, interactive learning and recreational space for students and adults alike to become more involved with the preservation of San Antonio’s waterways.

The arts take a prominent role in the celebrations: In addition to 10 new murals installed along the World Heritage Trail in 2017, temporary and permanent public art projects planned for 2018 include art installations along the River Walk, a monumental stainless-steel sculpture at the headwaters of San Pedro Creek, and a “tree of life” sculpture at the Mission Reach portal to Mission Espada that involved more than 300 San Antonio artists in its creation.

“You can learn about a culture of a people and their history through art in ways that you might not ever be able to learn through any other resource—it might be the only thing that survives,” says Debbie Racca- Sittre, director of the Department of Arts & Culture for the city of San Antonio. “Of course we want to celebrate our history, but we need to also look forward to our future and save things for future generations.”Cruz Ortiz, one of San Antonio’s most prominent artists, has just unveiled his own artistic contribution at the intersection of I-35 and Zarzamora Street: Dreamsong Tower. The 60-foot sculpture features design elements that reflect folklore and urban legends.

“Three hundred years from now, people might say, ‘What was it like in San Antonio in 2018?’ So if that’s the case, my job as I see it is to help document that,” Ortiz says. 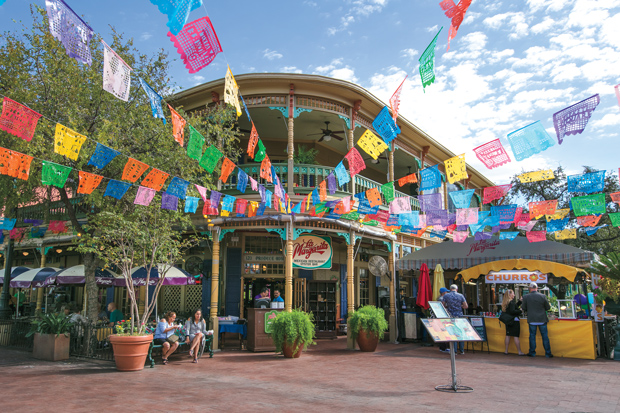 Ever since Father Antonio Olivares set up a Spanish outpost among the Payayas, waves of new arrivals have enriched San Antonio: Spanish colonizers and the natives from northern Mexico they brought with them, American settlers, German and Czech immigrants when Texas was its own republic, and Mexicans fleeing their country’s most recent revolution. San Antonio today is not so much a melting pot as it is a stockpot of chili con carne, a hearty stew of Mexican-grown fiery chiles, Texas- raised beef, and cumin—a spice first introduced to the region by Spanish Canary Islanders. “We have evolved,” explains Juan Tejeda, a San Antonio musician and retired professor of Mexican-American studies. “We are a hybrid culture, and our language, our food, our music, and our literature expresses that.”

“Three hundred years from now, people might say, ‘What was it like in San Antonio in 2018?’ So if that’s the case, my job as I see it is to help document that,” Ortiz says.

The city’s culinary scene is an obvious avenue for those cultures to shine. Blossoming from centuries of immigrant traditions and tastes, food in San Antonio today is unlike ever before—elevated by a Culinary Institute of America campus at the revitalized Pearl Brewery, which produces innovative new chefs to propel San Antonio beyond Tex-Mex to what it calls “Tex-Next.” In 2017, UNESCO designated San Antonio as a creative city of gastronomy—only the second city in the United States to earn the distinction, and the first in Texas. 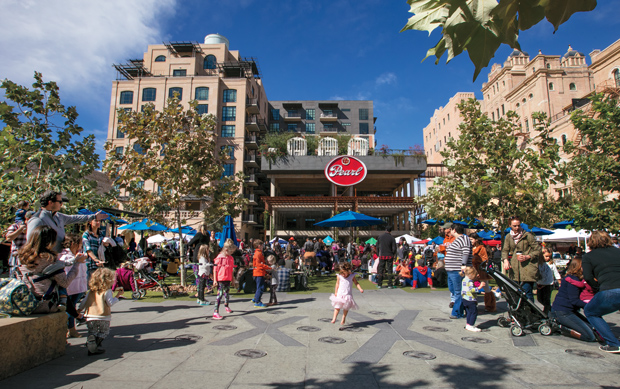 The revitalized Pearl Historic District maintains the identity of the original brewery while bringing new life to the site with live music, a farmers market, and special events every weekend.

Sarah Gould, lead curatorial researcher at San Antonio’s Institute of Texan Cultures—a museum dedicated to telling the stories behind the dozens of cultures that helped build the state we know today—has given a lot of thought to how the city embodies its diversity. “We embrace aspects of Mexican culture—everyone celebrates birthdays with piñatas here. That’s just what you do. You’d be hard-pressed to find someone in San Antonio who doesn’t have a Mexican blouse to wear during Fiesta.” She laughs as she describes a grab bag that can only be found at H-E-B stores in the San Antonio area: It contains a pack of tortillas, authentic barbacoa, and a bottle of Big Red. “San Antonio has this mix of people, and we can appreciate one another’s culture,” she says.

Conjunto music is yet another example. The button accordion, a musical import of polka-loving German and Czech immigrants, took root in Texas dance halls in the late 1800s. Mexican immigrants, who were partial to the 12-string bajo sexto guitar, quickly fell in love with the instrument. The two sounds fused together in South Texas, and a new genre of music was born. Conjunto soon found a home in the bars and dance halls of Alamo City. “This mixture, synthesis, and blending of cultures is at the core of our being—it’s this unique synthesis of cultures that has formed who we are culturally and artistically,” Tejeda says.

San Antonio today remains a place somehow culturally distinct from the rest of the state—best known for its river and Spanish missions, and its one-of-a-kind food, music, art, architecture, and love of fiestas. So, what’s next for a culturally diverse and historically rich city like San Antonio? Only time will tell.