Brighten Up Your Camping Trip After Dark with Stargazing 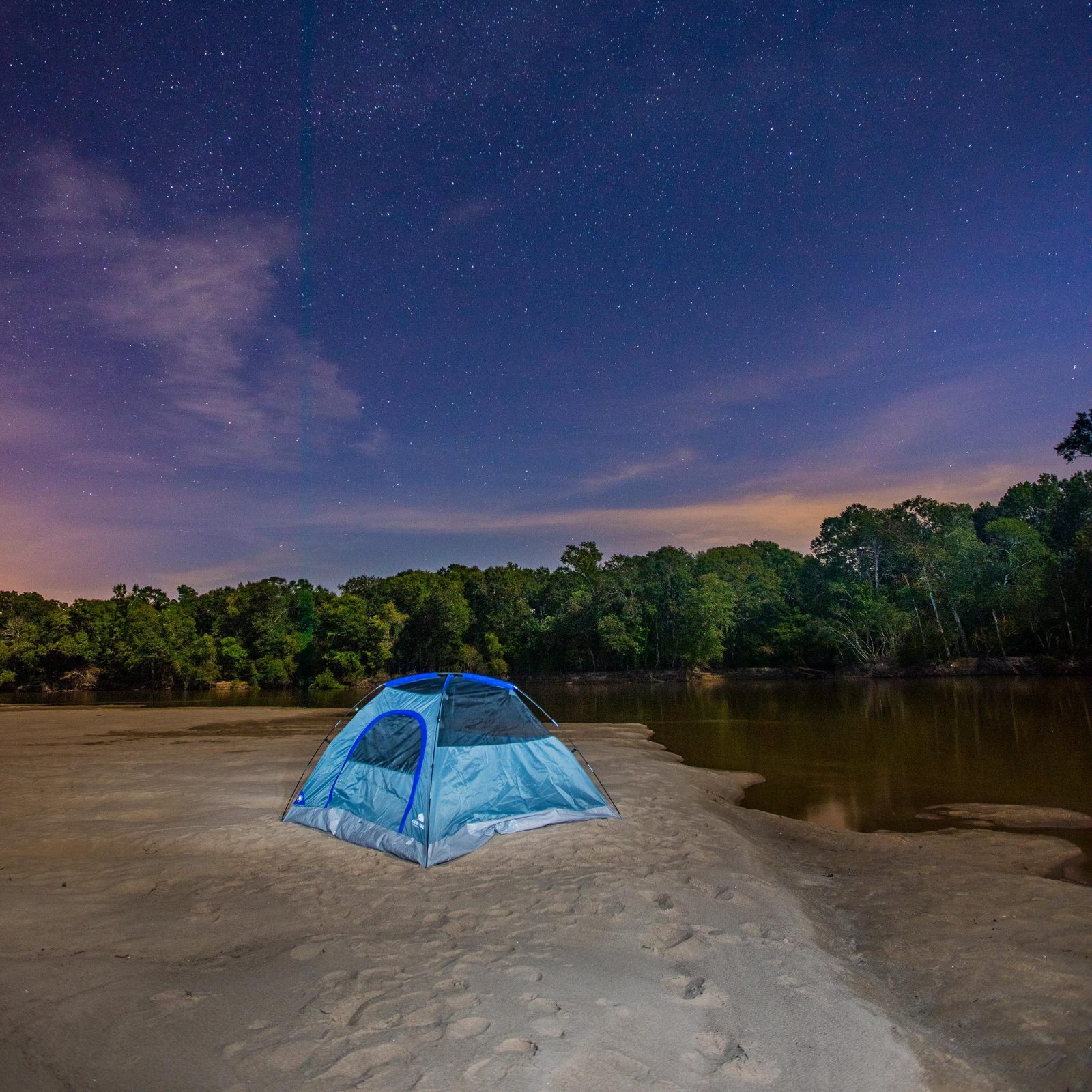 A campsite along the Neches River provides beautifully dark conditions for stargazing. Photo by Brandon Jakobeit

Camping brings to mind full days of activities like hiking, climbing, and swimming. But one of the best parts of a camping trip actually happens when the sun sets for the day—stargazing.

From any reasonably dark campsite in Texas, you can see prominent constellations, planets, and the moon. Some parks across the state have achieved designation as “dark-sky parks” because of their efforts to control light pollution, while some host star parties to introduce visitors to the night sky.

To experience the best stargazing on a campout, Katie Raney, a regional interpretive specialist with Texas Parks and Wildlife Department, recommends getting away from any kind of light—such as lanterns, restrooms, or street lights—and finding an open area. Often, a parking lot is perfect. The only equipment you really need are your eyes and a comfy blanket or cot to lie on (a picnic table or pick-up bed work as well), and maybe bug spray. Binoculars and a guidebook or smartphone app can also be helpful.

“Your eyes need about 30 to 45 minutes to adjust to the dark,” Rainey says. “Take some time, listen for owls and insects, watch for bats flying overhead, and just hang out.”

If you’re using an app, use dark-friendly settings. If you need a flashlight, use a red filter to avoid interfering with your night vision.

Late summer is a good time to spot Jupiter and Saturn, says Lara Eakins, program coordinator for the University of Texas Department of Astronomy. These bright planets are close to each other in the southeast sky in the evening. With binoculars, you can pick out some of the largest moons of Saturn, including Titan, and you may be able to discern Saturn’s elongated appearance (due to its rings). Mars comes up late in the evening and grows bigger and brighter moving into the fall. Venus rises in the east about two hours before dawn, and Mercury sits low in the east-northeast during dawn.

If you’re camping where the skies are very dark, Eakin suggest looking for the heart of the Milky Way galaxy, a band of dense clumps of stars in the sky near Sagittarius, looking south. Not everyone can pick out Sagittarius, a constellation of a centaur with a bow and arrow, but its western half is easy-to-spot and resembles a boxy teapot.

Earth’s moon is another accessible stargazing target. When the moon is full or close to it, binoculars will reveal features such as craters and its dark plains or maria, the Latin word for seas. You also may be able to see some of the Apollo landing sites.

Eakins also recommends finding the easily recognizable Big Dipper. Its handle end points to Polaris, the north star, which appears in the northwest a little after sunset in summer. “Polaris is not as bright as people think it is,” she adds. But it’s significant because it remains relatively fixed in the sky over the north of the planet while other stars appear to move around it.

If you’re lucky enough to see a falling or shooting star (actually a meteor), make a wish. No one will blame you if you wish for more nights of camping.

StarDate In the Sky This Month: From the University of Texas McDonald Observatory, celestial sights listed by date.

EarthSky Tonight: A daily guide to what you can see in the night sky.

Heavens Above: 10-day predictions of bright satellites, the International Space Station, Hubble telescope and other human made sights.

Moonrise and moonset calculator: Look up times by nearby cities.

Skymaps: Print out star charts or download them onto a device

Sky and Telescope: Celestial sights of the week and other resources.

Spot the Station: Tells you when the International Space Station will pass overhead.