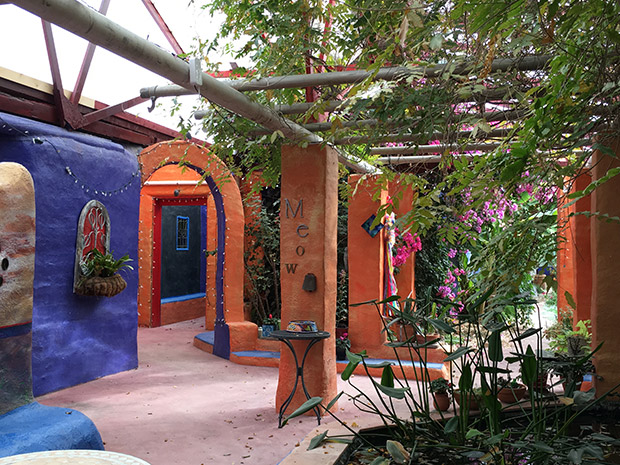 I first heard of papercrete 20 years ago, while visiting friends in Alpine who had moved from Austin. My friends, Tom and Susan Curry were talking about plans to build their next home with a greener and more economical alternative building method to adobe, using a mix of paper, sand, cement, and water.

They had begun collecting paper locally for use in this endeavor. Papercrete resembles adobe, but is very light in weight, which makes it much less labor-intensive, and is energy efficient with a high insulation value. The cement and sand makes it durable, fireproof, and gives thermal mass to the material.

Since that initial discussion long ago, Tom, a renowned editorial illustrator and fine artist whose work has appeared in Time, Rolling Stone, and Texas Monthly, has built several papercrete homes in-between art assignments along with outdoor sculptures. Recently, he completed a new studio and gallery for his work made of papercrete on Murphy St. in Alpine. Tom gave me a tour of the studio while I was in town just before the Alpine Artwalk in November. 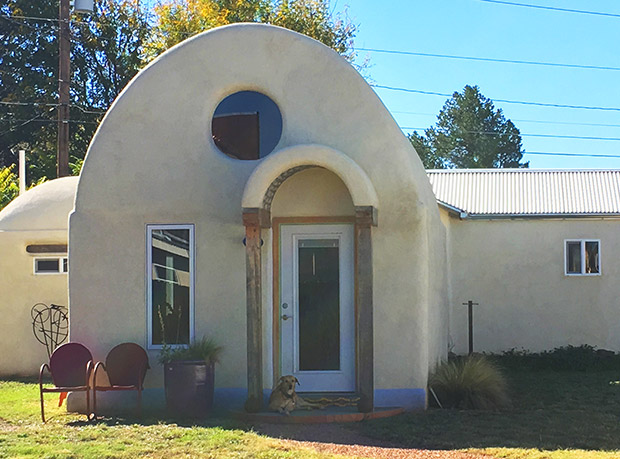 From the outside, the studio with its round roof reminds me of a figure from one of Curry’s notable illustrations. Inside at its centerpiece is a high-barrel, Nubian vault-style ceiling which doesn’t need timber for support. The tall curved ceiling design helps keep temperatures comfortable year-round. “Last winter, when it was 22 degrees one morning, it was 59 inside the studio—and that’s without the heater turned on,” says Tom. “Also, in the summer, when it was over 95 degrees outside, it only got to 80 degrees in here, without fans or A/C.” Dense walls also contribute to good insulation: For instance, the walls in the bathroom are one foot thick. Besides paper, more recycled materials went into the building: Tom pointed to the rustic wooden doors and cabinetry in the office area and bathroom, “We got the doors and a lot of the woodwork from the movie set of There Will Be Blood after it was torn down,” referring to the 2007 oil-boom historical drama filmed in Presidio County.

As Tom showed me around outside and brought me over to the mixer that he uses to make the papercrete, he pointed to several large overstuffed garbage bags filled with shredded paper. “People still give me bags of this. Actually, I’ve found that book and magazine pages work better than shredded paper,” says Tom. You might say that Curry’s creations have expanded from the printed page to the building stage. 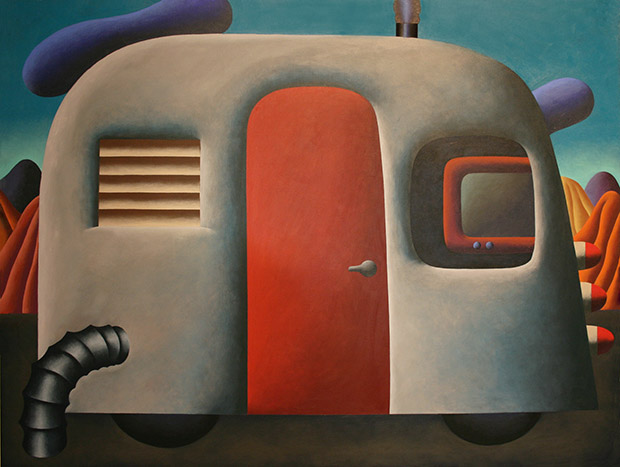 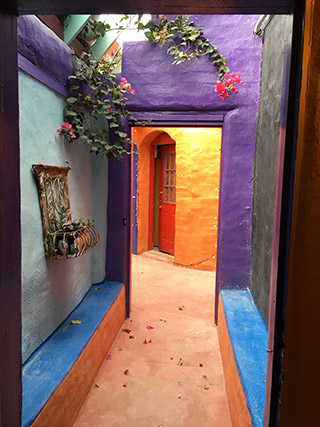 For a stay in a papercrete structure, colorful and quirky Eve’s Garden Bed and Breakfast in nearby Marathon offers lodging with a repurpose. Owners Kate Thayer, Noble Baker, and Alaine Berg are committed to conservation and ecology as well as aesthetics. The use of papercrete for Eve’s Garden was not only for environmental reasons, but also for ease in construction due to the material’s relatively light-but-durable weight, and its flexibility in creating shapes such as domes and arches, which is more difficult when using wood or metal. Eve’s Garden’s website offers more details on the hows and whys of papercrete.

Opened in 2001, Eve’s Garden features seven whimsical yet elegantly furnished guest rooms that face a lush, vibrant, almost-tropical courtyard filled with ponds, plants, and patio seating along with a fire pit. Climbing up the stairs to the B&B’s Stargazing Deck to view incredible Big Bend vistas, the papered surface beneath my feet felt both light and sturdy. Taking a tour inside a few of the guestrooms on an overcast, chilly morning, the temperature felt warm and comfortable even with the heater turned off. In the Garden Room, I peered down to admire the earth-tone pattern on the floor, which looked like a decoupage of large oak leaves. “Those are actually paper bags,” Kate remarked, as she directed me to a corner of the floor where the “made from recycled materials” writing from the bag was visible. “Alaine created the floor. The bags were collected from many sources over the span of a year,” she added.

In addition to the patio area, there’s a common area with creature comforts, such as an ice machine, toaster oven, microwave, and beverage area. When guests are in town during events like Viva Big Bend music festival, there’s even craft beer from Alpine’s Big Bend Brewery stocked in the mini-fridge. An indoor dining area is in the main house, and off to the side is a solar-heated lap pool. All rooms have private bathrooms and mini-fridges, free wifi, and, should you need it, air-conditioning and heating units.