Nearly Exterminated in the 1800s, These Majestic Creatures are Making a Comeback on the Ranges and Ranches of Texas 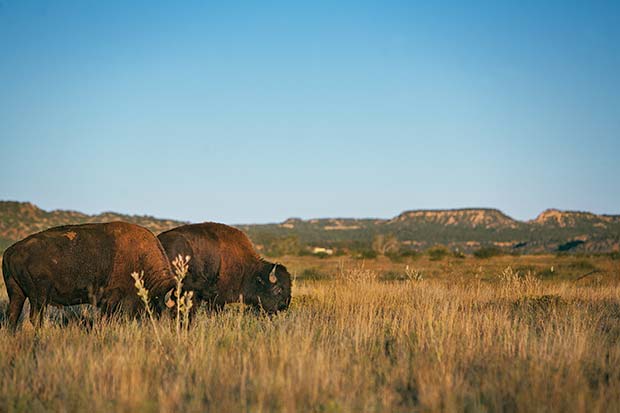 Bison graze just beyond the main road as we enter Caprock Canyons State Park northeast of Lubbock. They loom large, dark, and shaggy against the tawny open range on a late-September afternoon. It looks like a scene out of the Old West.

“There they are!” I exclaim with childlike excitement. It’s the first time I’ve seen the state’s official bison herd since the animals were released to the public area of the park two years ago. One of the cows gave birth unusually late and a fuzzy brown calf lies down beside its mother as she nibbles on some grass.

My husband, Dan, brings our truck to a stop, and we watch the graceful creatures with their soulful eyes. Mothers with calves can be especially defensive of their young, and bulls are often protective of their cows, so park rangers warn visitors not to approach wild bison.

We get the message and stay in the truck. The bison herd ignores us, reminding us that we are here on their territory to simply observe the last known descendants of the great Southern Plains bison. After all, they almost disappeared forever.

Bison have roamed North America for more than 25,000 years, providing food, shelter, and clothing for Native Americans. (Bison popularly are called “buffalo,” but that’s inaccurate because American bison only live in North America and buffalo species also live in Africa and Asia.) The first written reports about bison in what is now Texas came from Spanish explorer Álvar Núñez Cabeza de Vaca as he journeyed from Florida to Mexico between 1528 and 1536. The U.S. Fish and Wildlife Service estimates that in the 1500s about 30 to 60 million bison lived in North America. Trails of bison could spread several miles wide.

What historians describe as the “great slaughter” of bison took place in the early 1870s. Tanning bison hides became a profitable business and bison bones were used in refining sugar. Tens of millions of bison were slaughtered, nearly exterminating the species. In the late 1870s, Mary Ann Goodnight, the wife of rancher Charles Goodnight of the famed JA Ranch at Palo Duro Canyon south of Amarillo, grew so concerned about the bison’s plight that she urged her husband to save some of the creatures. He did, trapping enough of them in the canyons to form a small herd of Southern Plains bison, one of the five foundation herds in the United States that allowed the bison population to survive.

For more than 100 years, descendants of the original Goodnight herd roamed the sprawling ranch. In the 1990s the state began a quest to take over the herd and finally protect the bison. The ranch donated the herd to the state, and they were moved to Caprock Canyons State Park in 1997. In September 2011, 80 bison were released into their new range. Now they wander over 1,000 acres of the 15,000-acre park. “These are the genetic descendants of the animals that lived in the canyons of the escarpment,” says Donald Beard, superintendent of the state park. “It’s an amazing thing … these represent what the bison on the Southern Plains would have looked like.”

The story of the Southern Plains bison’s comeback from the brink of extinction stretches from Texas to Wyoming. By 1902, the bison at Yellowstone National Park had been decimated by poachers—down to about two dozen animals. To help replenish the Yellowstone herd, Goodnight sent some of his bison to Yellowstone. “The Goodnight herd is partly responsible for bringing bison back to Yellowstone,” Beard explains.

Then descendants of the Yellowstone herd in turn helped save the Southern Plains bison in Texas, which over the years had become threatened by inbreeding. Calves were not surviving because the herd lacked genetic diversity, Beard recalls.

Nowadays Buffalo Gap is best known to visitors for its historic village, a sprawling outdoor museum that houses a collection of structures from around the area, including a church, schoolhouse, and a blacksmith shop; and the popular Perini Ranch Steakhouse.

Fortunately, billionaire Ted Turner, founder of the CNN communications empire and owner of the world’s largest private bison herd (Turner Enterprises manages about 55,000 bison across several ranches), had acquired some animals that also were descendants of the Yellowstone herd. In 2005 he donated three bulls to Texas, and the calves they helped produce have diversified that group.

The herd at Caprock Canyons State Park now numbers 90, with a better ratio between males and females, Beard says, adding, “Our long-term plans for the park are to raise enough animals to put them into the whole park—200 to 300 bison.” Once that happens, the park plans to share bison and place herds around other state parks, “so we don’t have all our eggs in one basket in case disease were to strike,” Beard says.

After our first glimpse of the herd, Dan and I head to our campsite to pitch our dome tent. The wind kicks up as a storm approaches. After the sun sinks behind the ridges, the stars blink on and lightning flashes to the north. The storm blows in around midnight and rain pounds the tent. By morning, the temperature drops into the 50s, and I shimmy down into my sleeping bag, wrapped like a mummy.

After dawn, we crawl out of our tent into the early light and begin setting up our Coleman stove to cook breakfast. A man wearing a fuzzy brown hat with horns runs by us on the road in front of our campsite. Then another. And another.

I do a double-take. Who are these folks who look like Vikings wearing T-shirts and running shoes? Then I remember they are participants in the Buffalo Stampede, a 5K and 1K run through the park that raises money for the bison herd as part of the area’s annual Bison Festival. The third annual festival will be held again this year on the third weekend of September.

Bison, after all, draw tourists. Beard notes that before the herd was restored at Caprock Canyons, the state park attracted about 38,000 visitors a year. After the bison herd was made available to the public, the numbers shot up to 68,000.

We take a spectacular hike past red-rock canyon walls striped with gypsum and sunflowers reaching for the blue sky. Afterward, we hop in the truck and drive five minutes to Quitaque, Bison Festival headquarters. The fest unfolds on the grounds of the local cotton gin, where the stage awaits the band Asleep at the Wheel and other musical acts. We grab a barbecue sandwich—beef, not bison—and stroll around to see the bison-related wares at vendor booths.

Soft gloves draw us to a table set up by Buffalo Gold Premium Fibers, a retail operation in the town of Goodnight, between Amarillo and Clarendon. In 2012 Buffalo Gold, which makes a line of gloves, hats, rugs, blankets, and other items from bison down (the insulating undercoat), relocated its “Herd Wear” retail operation—and bison herd—from Burleson to part of the former Goodnight Buffalo Ranch.

The ranch headquarters and Goodnight’s residence, built in 1886, have been restored, and visitors can now see Buffalo Gold’s bison herd—four cows, plus five on loan from Caprock Canyons State Park and seven calves—grazing on 20 acres. Buffalo Gold founder Cecil Miskin says he’s drawn to bison because of their majesty and “calmness”—blasting the myth that bison are notorious roaming fence-busters with aggressive personalities. “They don’t run away, so people can watch them,” Miskin says. “There’s kind of an interaction between humans and bison. We’re all so instant these days. You can just sit and watch bison over a period of time.” 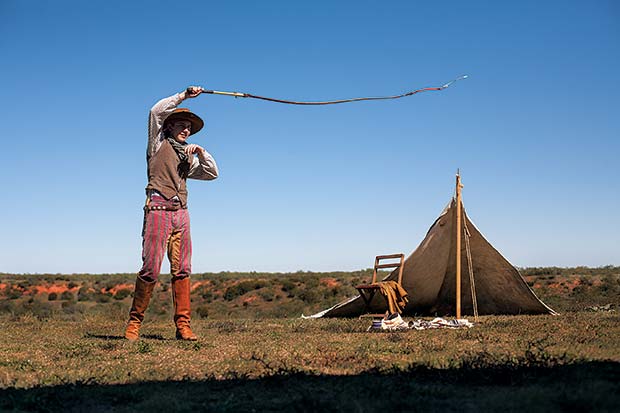 The Texas Bison Association also sets up a booth at the festival, and we spot a familiar face—Ronnie Wenzel, who owns a bison ranch in Hamilton County. His son, Kent, sells bison meat in Hamilton at Wenzel LoneStar Meat Company, on the square. Beard, who also serves on the TBA board and raises bison himself, says ranchers who raise bison and sell the meat with sustainable business practices have been instrumental in helping conserve the animals and increasing their numbers.

“It’s a huge factor,” Beard says. “About 90 percent of the bison alive today are in private hands.” Researchers are looking at the state of bison and the role of ranch management, different management styles, and other activities that can benefit the conservation of the species, he adds.

The goal is not only to increase the numbers of the Texas State Bison Herd, but also to increase their conservation. “Species-wise, they are the same as the bison at Yellowstone,” Beard says. “But to conserve the Southern Plains bison’s genetic strain, we have to increase them to about 1,000 to 1,500 total animals.

“They are the last ones,” Beard adds.

Those words haunt me after leaving Quitaque. After traveling south en route to Interstate 20, we head east from Sweetwater to Abilene, then take a detour on Farm Road 89. The road follows the old Center Line Trail about 13 miles south to the town of Buffalo Gap, named for the gap in the Callahan Divide, a range of low hills that separate the Brazos and Colorado river basins. In the 1860s and 1870s, the gap drew hunters of the bison that came to drink at Elm Creek. I can envision the herds traveling through the gap in the hills on the way to the high plains before the mass slaughter ensued.

Nowadays, Buffalo Gap is best known to visitors for its historic village, a sprawling outdoor museum that houses a collection of structures from around the area, including a church, schoolhouse, and blacksmith shop; and the popular Perini Ranch Steakhouse. Painters and potters have set up studios and galleries. Metal cutouts of bison hang from light poles.

After traveling farther east on Interstate 20, we head south on US 281 and then east on US 67 to our own ranch north of Glen Rose. Dan and I take a shortcut down County Road 2008 and pass by Fossil Rim Wildlife Center, home to a small herd of bison. The center currently isn’t breeding the bison, which still are listed as “near threatened”—one step above “vulnerable” and two above “endangered”—by the International Union for Conservation of Nature and Natural Resources.

I’m glad the state’s fascination with bison continues, this time preserving and raising them. Maybe someday we’ll see herds of bison in more state parks as the descendants of the Goodnight herd multiply. Judging from the scene at Caprock Canyons, after more than a century of struggling back, the bison are on their way.