Written by Lois Rodriguez, Photographs by Will van Overbeek | From the April 2014 issue | Updated: July 10, 2020 | Filed Under: Culturemade in texas 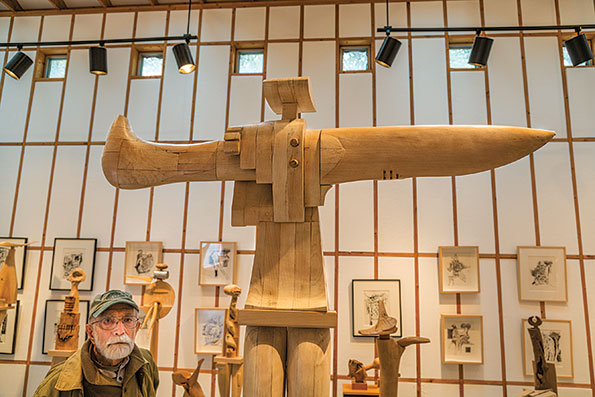 The road to artist Philip John Evett’s Hill Country home runs along and across the Blanco River, past majestic live oaks and fields of goats. Tucked among these oak, cedar, and cactus-scrabbled hills, Evett’s art gallery showcases a range of his uncanny creations—drawings dreamed onto paper and sculpture seduced from wood—that reflect the life, work, and journey of the artist’s 91 years.

While Evett welcomes scheduled visits to his home gallery, the artist also remains active with occasional exhibitions, recently at venues like the Tyler Museum of Art, and San Antonio’s Blue Star Contemporary Art Center and McNay Art Museum, which holds Evett pieces in its permanent collection. Currently, the Valley House Gallery and Sculpture Garden in Dallas represents Evett’s work and houses many of his recent sculptures, which can be seen by appointment.

For Evett, his lifelong pursuit of art is a creative process of self-discovery and realization. “I never begin a piece with a preconceived plan,” he explains. “I feel that I’m doing my best work when I make something that surprises me.”

Evett’s journey of artistic self-realization goes back to his birth in 1923 at Swanscombe, Kent, England. Educated at Cambridge College of Art and Belfast College of Art, he was a Royal Air Force flying officer in World War II and served as a radio operator-air gunner. After the war, he restored bombed churches and carved war memorials at university chapels in Cambridge. At Westminster Houses of Parliament, the young artist helped repair a sculpted Prussian eagle that had been hit by a 500-pound German bomb.

By 1954, living in a boat on the River Cam, Evett was feeling restless. “I had befriended Dick Underwood, assistant director of the University of Texas Press, who had been in England studying the printer’s art,” Evett recalls. “And Dick wrote to me and said, ‘Well, why the hell don’t you come over here? I’ll be your sponsor.’”

Soon, the 31-year-old artist found himself disembarking at Houston. “I loved Texas immediately,” he says. “There was such optimism here, and I felt somehow more vibrant and alive.” Settling first in Austin, the young Brit was asked to create a portrait bust of Sam Houston for the publication of Llerena Friend’s 1954 book, Sam Houston—The Great Designer. Evett unveiled the sculpture at a book party at the Texas Capitol, where it was placed in the office of Governor Allan Shivers. The experience led to an opportunity for Evett to sculpt a bust of the governor himself.

The writer and folklorist J. Frank Dobie also sat for a portrait, delighting the young Evett with his tall Texas tales. “He taught me a lot about life,” the artist recalls. “He taught me to savor the moment.” During a visit at Dobie’s Paisano Ranch, Evett asked if Dobie felt lonely out there by himself. “Oh no, Phil,” Dobie replied. “At my age, I like the workings of my own mind.” Some 60 years later, those words continue to inspire Evett as he pursues the solitary art of sculpting in his Blanco County studio. (Evett’s Dobie bust is on permanent display in the research room of The Wittliff Collections at Texas State University in San Marcos.)

Evett’s artistic circle included sculptor Charles Umlauf, whose work can be seen in the Umlauf Sculpture Garden and Museum in Austin, and the Texas muralist, sculptor, architect, and inventor Buck Winn. “I loved old Buck,” Evett recalls. “He looked like a Texan, spoke like a Texan. Buck was a significant influence on Wimberley as an art center.”

In 1956, the expatriate had his first solo exhibition at Laguna Gloria Art Museum in Austin. “Philip John Evett’s Work Shows Vigor at Laguna,” read the headline of the Austin American-Statesman review. The critic perceived “an inventive use of materials” in Evett’s sculpture, noting, “His colored drawings are obviously influenced by his new surroundings.”

The following year, the artist moved to San Antonio, where he taught at the San Antonio Art Institute and worked in a studio at La Villita Historic Arts Village. In 1960, he began teaching at Trinity University. He retired from Trinity in 1987 as a professor emeritus.

Though he has worked in stone, clay, plastic, aluminum, and steel, Evett’s primary medium for the last several decades has been wood sculpture, in addition to drawings on paper. He likes to work with maple, cedar, mahogany, oak, and other woods, often combining more than one kind of material in a piece. The late Donald S. Vogel, founder of the Valley House Gallery, described Evett’s “anthropomorphic forms” as resembling “strange mannequins” that appear “almost joyous” and exude “some unfathomable charm.”

In a 2011 lecture at Blue Star—viewable on YouTube—the artist noted that his father’s face was an early sculptural influence; the elder Evett, an industrial chemist, had lost an eye and suffered disfigurement on one side of his face in a nitroglycerin accident. He also recalled that amputees were a common sight in England in the days after World War I. In many of Evett’s artworks, presences and absences seem to suggest phantom limbs or branches that sprouted from dimensions unknown. The aesthetic impact is not ghoulish, but rather one of beauty and mystery.

Walking the windswept mesa called “Evett’s Everest” behind his home on the outskirts of Blanco, it’s easy to see why Evett chose this spot for his outpost. “All I hear out here are dogs barking and birds singing,” he says. “And all I see are the trees and hills and endless sky.”

Asked if he finds inspiration in the myriad forms of branches and limbs, the artist pauses to savor the view. “Oh yes,” he replies. “Some of my best friends are trees.”